Lea Michele took a stroll with her family in New York City on Saturday morning.

The 35-year-old actress appeared to be enjoying the pleasant autumn weather as she spent time with her loved ones and baby son, Ever Leo.

The performer’s outing comes just a day after the release of her newest musical project, which was entitled Forever: A Lullaby Album. 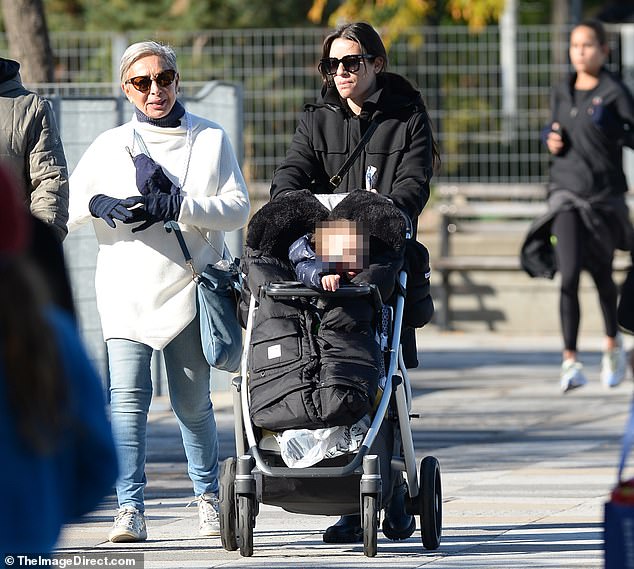 Stepping out: Lea Michele was seen taking a stroll with her family in New York City on Saturday morning

Michele was dressed in an all-black outfit that included a sizable overcoat which was zipped up to her neck.

The Glee actress also sported a slim-fitting pair of leggings and a set of high-top leather boots.

She accessorized with a large pair of sunglasses and kept a small purse slung across shoulder.

Lea’s lovely brunette hair was tied back into a tight ponytail while she spent time with her loved ones. 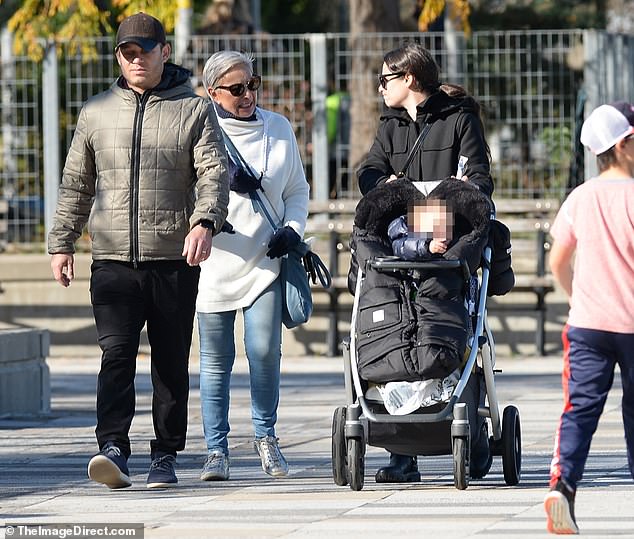 Staying consistent: Michele was dressed in an all-black outfit that included a sizable overcoat which was zipped up to her neck 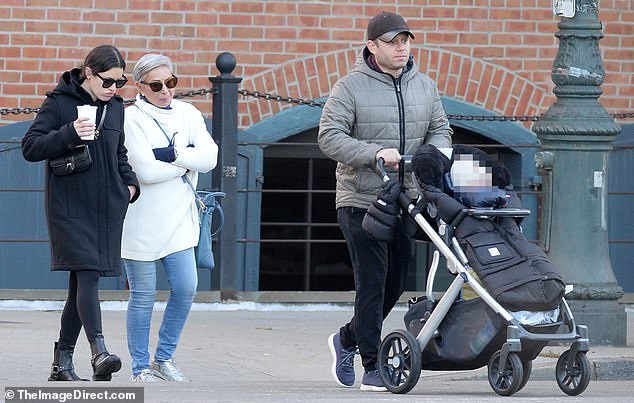 Keeping it consistent: The Broadway veteran accessorized with a large pair of sunglasses and kept a small purse slung over her left shoulder

Michele and Zandy Reich began their relationship in July of 2017.

She was previously in a relationship with her Glee costar Cory Monteith, whom she dated from 2012 until his death a year later.

Michele went on to tie the knot with Zandy in 2019, nearly one year after he proposed. 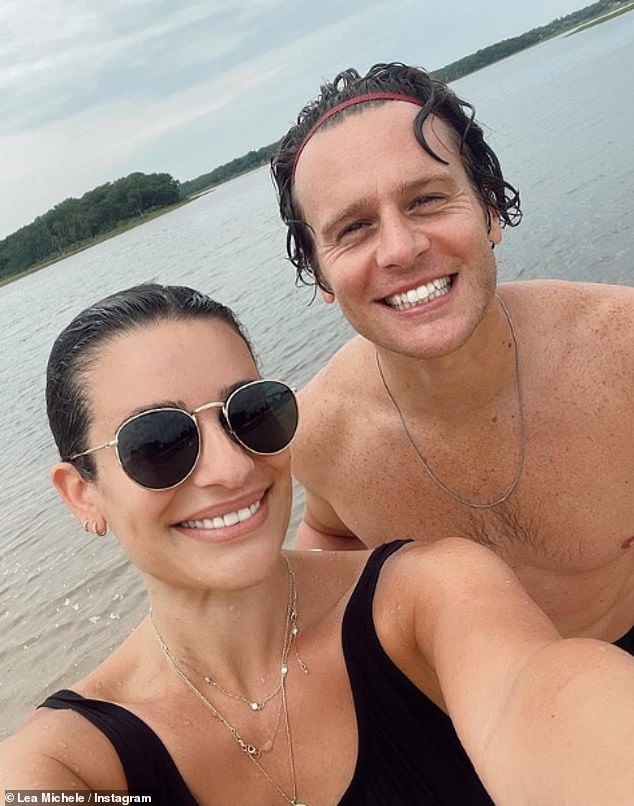 Going strong: Michele and Reich were initially connected when they began their relationship in July of 2017

She went on to announce that they were expecting a child the following year, and she gave birth to Ever Leo in August 2020.

Lea admitted she recorded her new lullaby album as a way of comforting her child during the recent months.

‘I was pregnant during the pandemic and I used music during my pregnancy, singing to my son, to let him know that everything was OK,’ she told E! News’ Daily Pop. 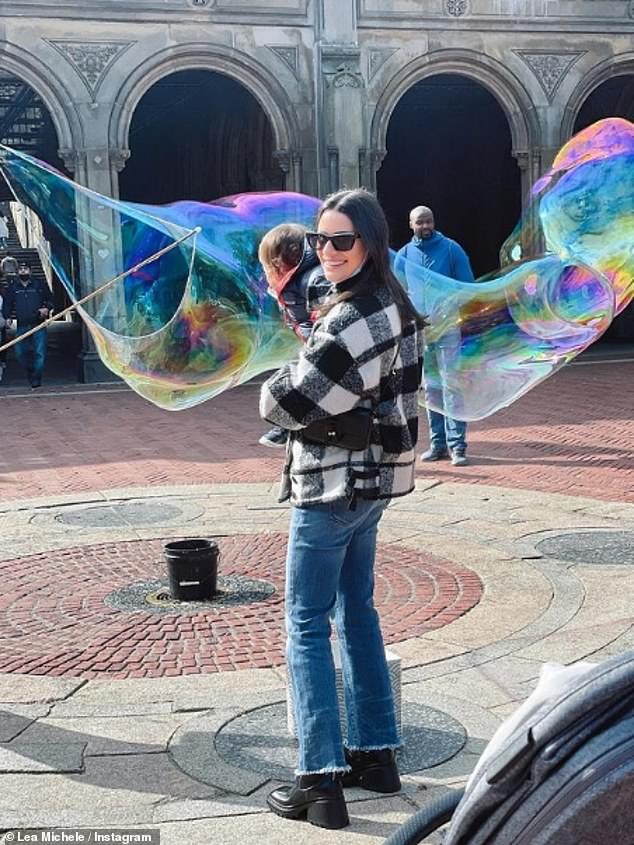 Starting a family: Michele and Reich announced that they were expecting a child in early 2020, and she later gave birth to Ever Leo that August

Michele recalled that she was ecstatic upon seeing her baby boy for the first time after giving birth.

‘The moment that my son was handed to me was truly the greatest moment of my life. I’ve never been more thankful to God than in that moment,’ she said.

The actress also made a point of discussing how Reich had been a positive influence in her life.

‘He really just helps me to relax. I’m a very anxious person…I’m very lucky to have such a supportive partner,’ she stated. 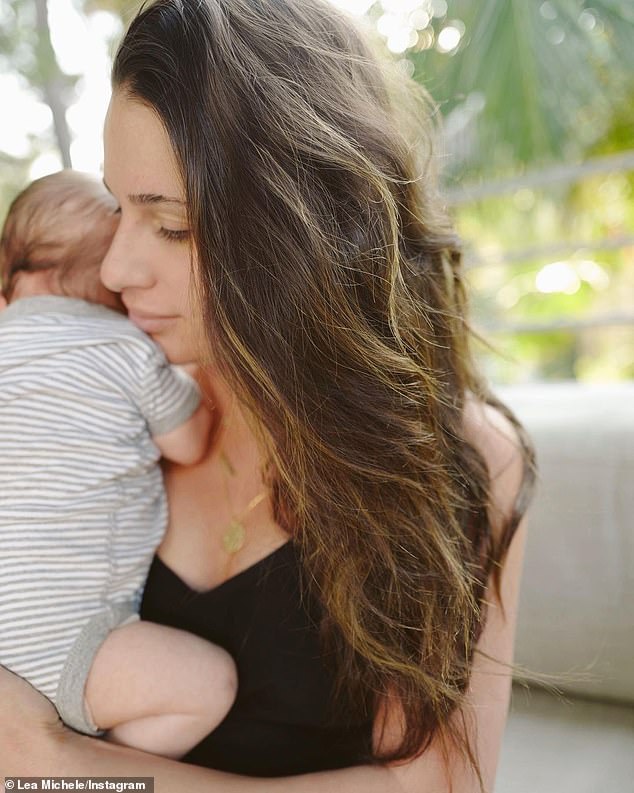 Happy mom: Michele went on to speak about her baby’s birth and recalled that she was ecstatic upon seeing him for the first time