Linda Evangelista posted a tearful tribute on Instagram to her dog who passed away this week.

The star, 56, said goodbye to her French bulldog Mini Moon. She posted a photo of the dog wearing a unicorn horn on its head.

She captioned the photo, ‘Because of you, I believe in unicorns. Sleep with the angels my Mini Moon. You were there for me when I needed you most. So very difficult to imagine moving forward without my shadow following.’ 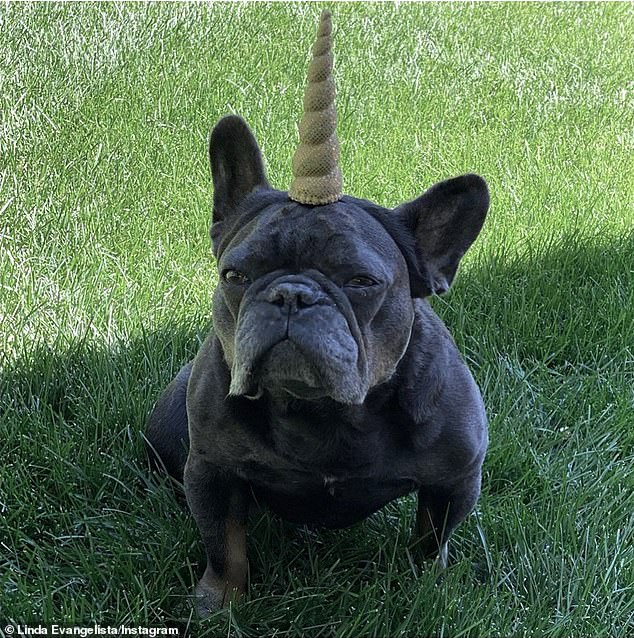 Gone too soon: Linda Evangelista posted this tribute to her French bulldog Mini Moon who passed away this week

Numerous other celebrities passed along their condolences to the model in the comments section of the post including models Helena Christensen, Naomi Campbell and Mad Men actress January Jones.

This latest tragedy comes just two weeks after the model revealed that a cosmetic procedure had left her ‘brutally disfigured.’

According to Linda, she had undergone a CoolSculpting procedure to ‘decrease’ her fat cells, but instead the procedure ‘increased’ her fat cells, a peril she insists she was not warned of, so is now seeking legal action.

She has developed paradoxical adipose hyperplasia – a rare, previously unreported adverse effect of cryolipolysis, which has been reported in of 0.0051% of the 1.5 million CoolSculpting procedures performed worldwide. 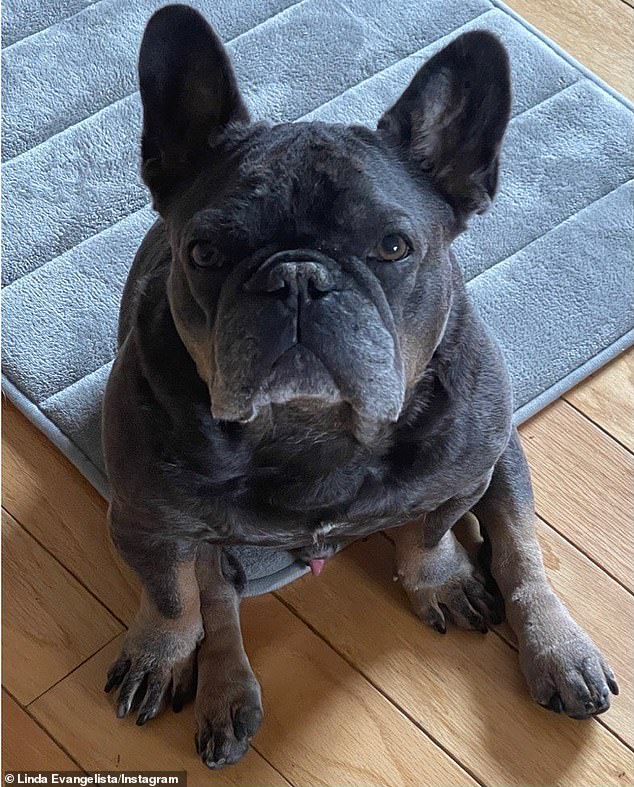 ‘Sleep with the angels’: Linda Evangelista wrote a kind caption for her pup which included her saying, ‘You were there for me when I needed you most’ 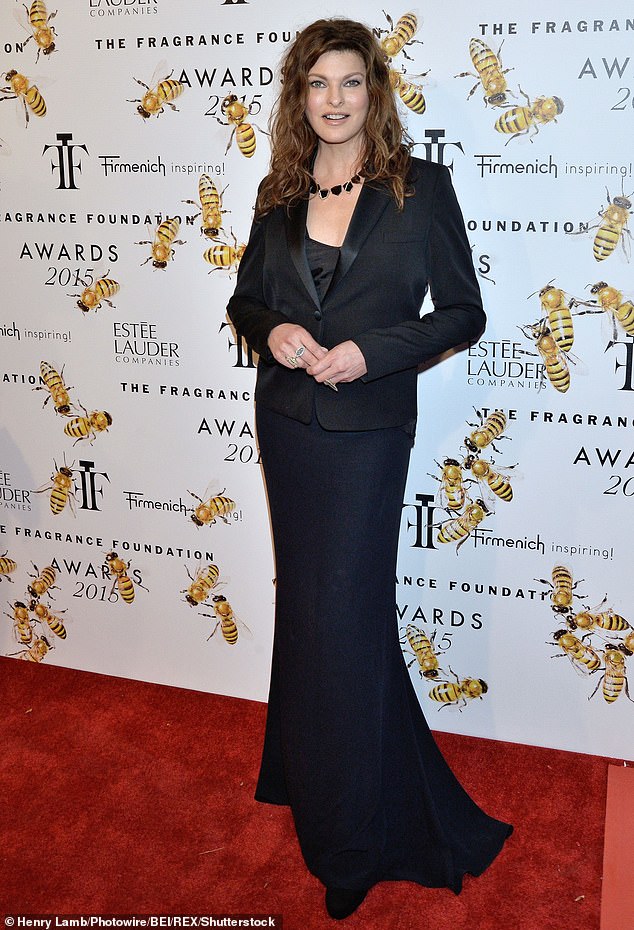 From bad to worse: The actress, seen here in 2015, also recently revealed that a cosmetic treatment left her ‘brutally disfigured’

With this condition, the treated area becomes larger, rather than smaller, in the weeks after the procedure. It can leave a ‘painless, visibly enlarged, firm, well-demarcated mass’ underneath the skin.

Linda’s statement read: ‘Today I took a big step towards righting a wrong that I have suffered and have kept to myself for over five years. To my followers who have wondered why I have not been working while my peers’ careers have been thriving, the reason is that I was brutally disfigured by Zeltiq’s CoolSculpting procedure…

‘[It] did the opposite of what it promised. It increased, not decreased, my fat cells and left me permanently deformed even after undergoing two painful, unsuccessful corrective surgeries. I have been left, as the media described, ‘unrecognizable.”

The model claimed she wasn’t properly warned of the potential side effects associated with the CoolSculpting procedure. She went on: ‘I have developed Paradoxical Adipose Hyperplasia or PAH, a risk of which I was not made aware before I had the procedures… 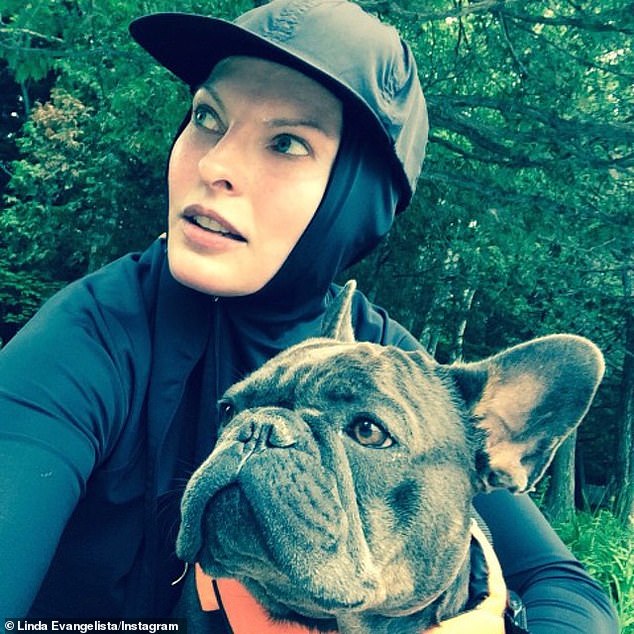 Going the wrong way: Evangelista got a treatment meant to decrease her fat cell count, but it actually increased instead 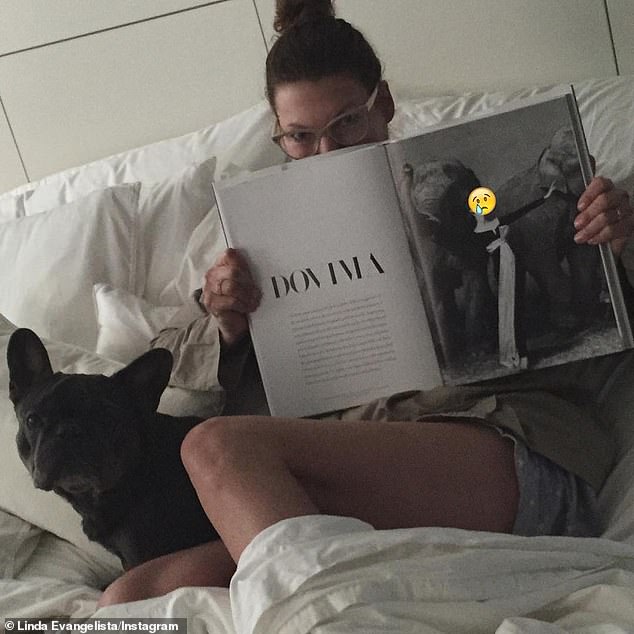 Affected both physically and mentally: The model alleged that both her body and her mental health were compromised by the adverse weight gain 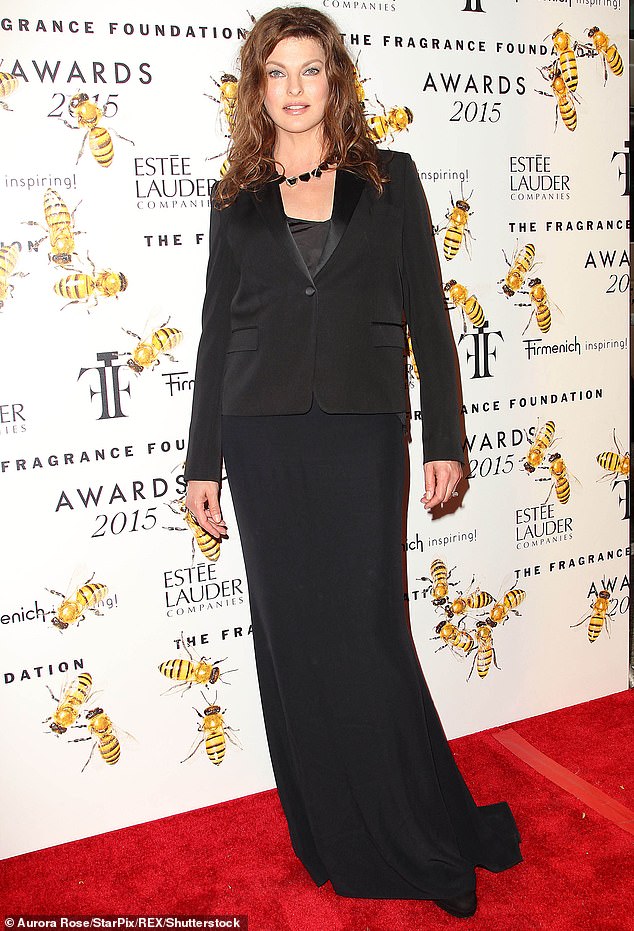 ‘Rid myself of shame’: The star said her lawsuit was meant to rid her of any shame since she was ‘going public with my story.’

‘PAH has not only destroyed my livelihood, it has sent me into a cycle of deep depression, profound sadness, and the lowest depths of self-loathing. In the process, I have become a recluse…

‘With this lawsuit, I am moving forward to rid myself of my shame, and going public with my story. I’m so tired of living this way. I would like to walk out my door with my held held high, despite not looking like myself any longer.’

During a cryolipolysis procedure, also known as body sculpting, a device that’s usually set below freezing temperature is applied to fat deposits, which causes cell death in the fat tissue.

The body can then pass the dead fat cells.

According to Healthline, the increased fat deposits aren’t harmful, but they also don’t appear to go away on their own over time. The ‘very rare’ condition is most common in men who have undergone cryolipolysis, though it can still affect women. 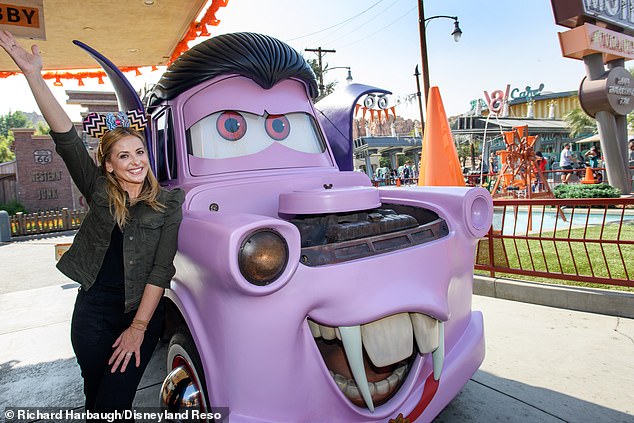 Other people are fans: Sarah Michelle Gellar, seen here at California Adventure, supports CoolSculpting and even became an ambassador for it last year

Linda singled out the Allergan subsidiary Zeltiq for allegedly performing the botched procedure without informing her of the potential negative side effects.

Speaking at the time, Sarah detailed that while she is incredibly fit and healthy she struggles with difficult to shift areas of fat. She said: ‘I had had such a positive experience with the procedure [Coolsculpting®] (and the results)…

‘I was able to target those specific areas with an incredible result and with only an hour of my time (I even managed to get through a few chapters in the book I was reading) so you know that’s a win for me.’