Jurgen Klopp is eportedly furious with Liverpool’s owners for announcing their intention to join the European Super League ahead of his side’s clash with Leeds.

The Reds are one of 12 teams to have signed up to the breakaway competition along with five other Premier League clubs – including Manchester United, Chelsea, Manchester City, Arsenal and Tottenham.

According to The Athletic, Klopp was left extremely unhappy with the club’s American owners, Fenway Sports Group, over their willingness to join the Super League and for the timing of the announcement just before a crucial fixture. 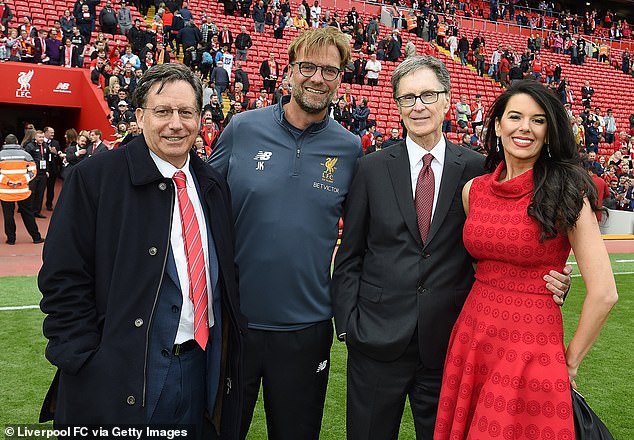 Klopp has previously spoken out against the idea of a Super League and the manager insisted his opinion hadn’t changed in his pre-game interview last night.

He told Sky Sports: ‘My opinions didn’t change. I heard first time about it yesterday and when you try and prepare for a very difficult game like Leeds United and then so far we got some information, not a lot to be honest – most of the things you can read.

‘It’s a tough one people are not happy with that, I can understand that but I can’t say a lot about it to be honest. We were not involved in any processes, me nor the players we didn’t know about it. We’ll have to wait and see how it develops.’ 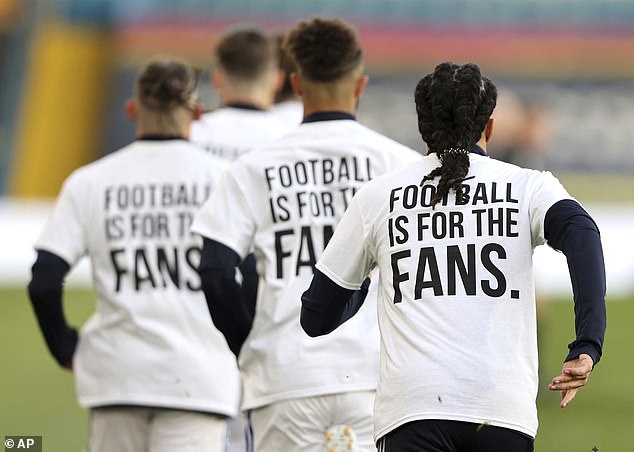 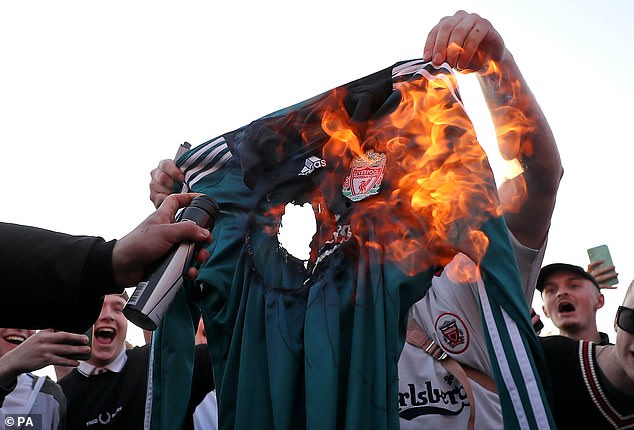 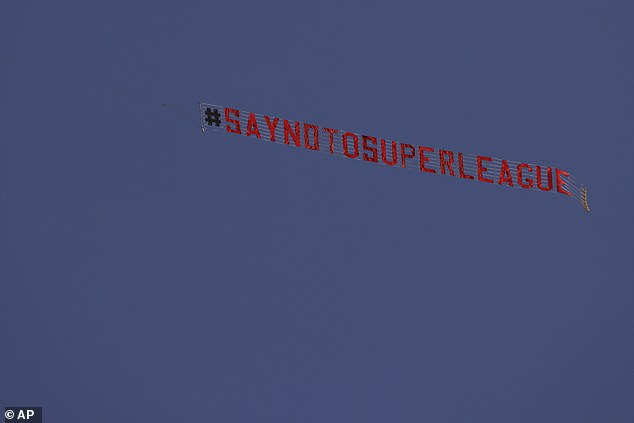 A red banner was also flown over the stadium which read: ‘#SayNoToSuperLeague’

Liverpool had the chance to climb back into the top four with a victory at Elland Road.

Klopp is said to have urged his squad not to be distracted by the reaction in a meeting with his players on Monday morning but they were unable to take three points in West Yorkshire.

Sadio Mane’s first half strike was cancelled out by a late Diego Llorente equaliser, leaving the Reds in sixth place.

Klopp was also angry about the treatment of his staff and players. They were said to be shocked by the abuse directed towards them during pre-game walk in Leeds and when their team bus arrived at the stadium.

A Liverpool shirt was burned while supporters chanted ‘scum’ and ‘greedy b*******’ and a banner was flown over the stadium during the match.

‘I have nothing to do with it, but people treat us like that,’ Klopp said after the game.

‘Leeds fans shouting at us in the city and here tonight. We have nothing to do with this. Employees of the club. When I am involved I take the criticism, same with the players, but we are not involved in this.

The Leeds fans were shouting at us like I’d said, “Let’s go to the Super League”. We are talking about human beings. With all the things that are written, people should not forget that. It’s an emotional situation.’ 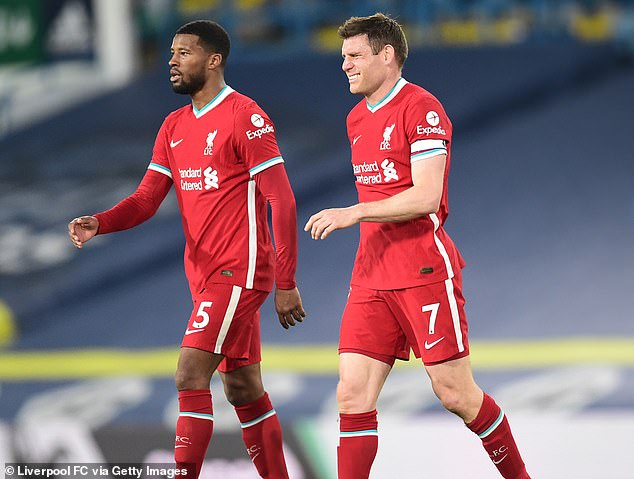 Leeds players warmed-up in t-shirts opposing the Super League which read: ‘Earn It’ on the front and ‘Football Is For The Fans’.

The t-shirts were left in Liverpool’s dressing room but Klopp described them as a ‘joke’ with his players opting not to wear them.

‘If somebody thinks they have to remind us that that you need to earn a place in the Champions League, that’s a joke it’s a real joke and it makes me angry,’ Klopp said before kick-off.

Responding to the pundit’s comments, Klopp said: ‘Gary Neville speaks about You’ll Never Walk Alone. That already should be forbidden to be honest,’ he told Sky.

‘Because we have a lot of right to sing that anthem, that’s our anthem and not his and he doesn’t understand it anyway so I really don’t want these kind of things because it’s not fair. 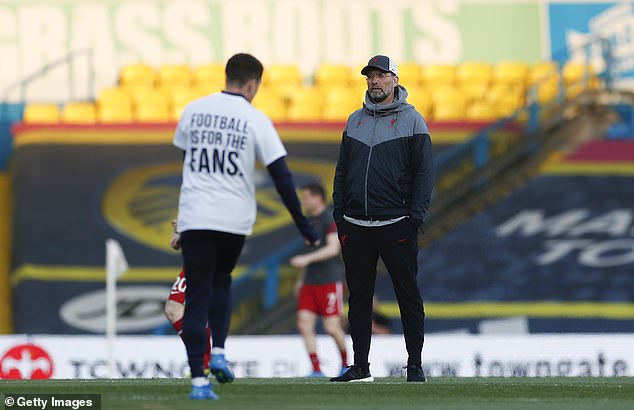 ‘I understand all the talk and I don’t like it as well. But I don’t talk about other clubs like this, you can be emotional but I wish Gary Neville would be in a hotseat somewhere and not everywhere where the most money is.

‘He was at Manchester United, Sky all these kinds of things. Don’t forget we have nothing to do with it. We’re in the same situation as you all we got information and we still have to play football.’

Neville then defended his comments in the studio, saying: ‘Why is it not fair? I have insulted Liverpool loads of times over the years, yesterday was nothing to do with insulting Liverpool.

‘Yesterday was an impassioned plea about football and said my biggest disappointment equally was with Manchester United and Liverpool so I don’t know what his problem is.

‘He talks about hotseat, I had a 25 year career at Manchester United and then 11 years at Sky and I worked hard for that. I’ve not been handed it and gone where the most money is. 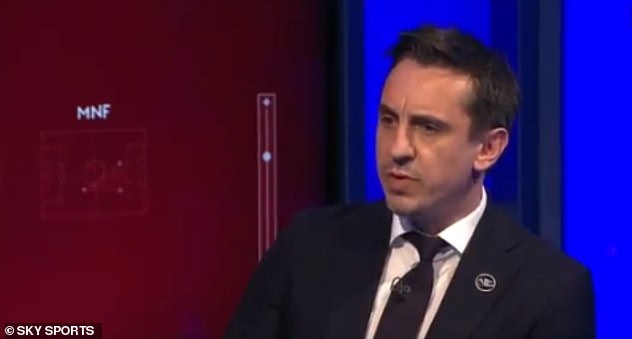 ‘I didn’t have choices. Sir Alex Ferguson did not say “Gary do you want to stay here?” every year.

‘I employ 600 people in the city and try to look after them through a pandemic. Is that not a hot enough seat for him?

‘He’s done a great job at Liverpool, I’ve got no problem with Klopp, I loved his team but the fact is he’s spiky, he’s been let down by his owners who have thrown him under the bus.

‘We’re actually on the same team. But fact of the matter is he can’t say what he wants to say and I can.

‘The Klopp I know he hates every thing about this, goes against everything he believes in.’