Her movie Truth Or Dare revolutionized the art of the music documentary.

And Madonna is inviting filmmakers back into her world once more for the upcoming Paramount+ project Madame X.

The doc will follow the diva, 62, during her tour as her secret agent alter ego and is set to premiere in the US, Canada and Australia on October 8, according to Deadline. 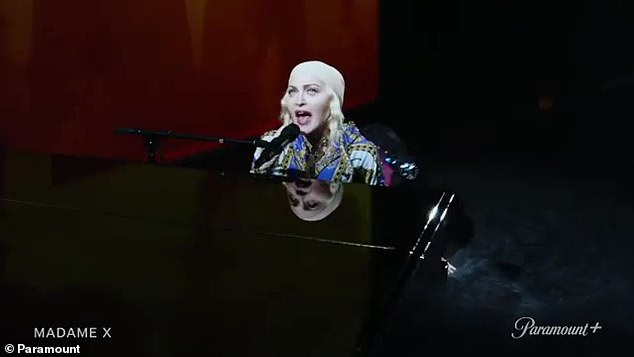 ‘Sharing my vision with global audiences has been profoundly meaningful to me,’ Madonna shared in a statement.

‘The opportunity to bring its message and the incandescent artistry of all involved to an even wider audience comes at a time when music is so deeply needed to remind us of the sacred bond of our shared humanity,’ she went on.

The Material Girl teased Madame X on her Instagram Thursday, posting a trailer while telling fans: ‘Madame ❌ is finally ready to disturb the Peace..,,,,,………..Streaming Oct 8th…,,,,,,,,,,,,Paramount +. Are you ready?’

Filmed in Lisbon, Portugal, the film ‘captures the pop icon´s rare and rapturous tour performance,’ according to a press release.

It features 48 on-stage performers including Madonna´s children, musicians and dancers from around the globe.

The film will take ‘viewers on a journey as compelling and audacious as Madonna´s fearless persona Madame X, a secret agent traveling around the world, changing identities, fighting for freedom and bringing light to dark places.’

Her last album, also called Madame X, hit the top spot of the Billboard 200 chart in 2019.

It will come 30 years after the pop star’s groundbreaking documentary Truth or Dare chronicled her life ­during her Blond ­Ambition world tour.