Bilal Fawaz was banned from going to school. When visitors arrived at his London home, the then 14-year-old was ordered to stay upstairs. He was beaten. His days were spent doing household chores. He wasn’t allowed to leave the house. He was a slave.

The teenager, who had recently landed in London from Africa, was one of a number of children living with a Nigerian family — he isn’t exactly sure where.

All he was told? Leave the house and you’ll end up in jail. 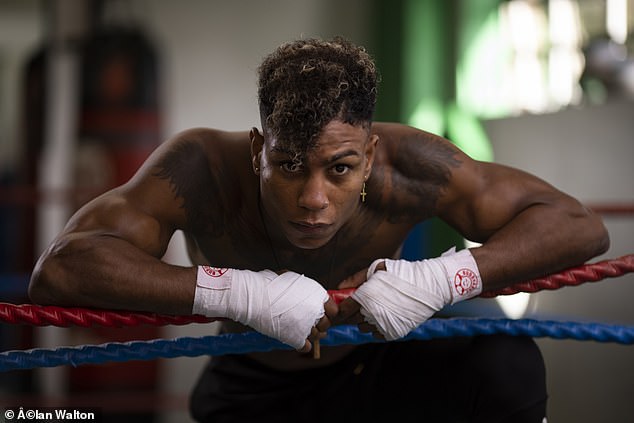 ‘I didn’t feel like a servant,’ the 32-year-old tells Sportsmail. ‘I didn’t know what that was. I just thought, “I’m a kid. I’m supposed to do as I am told”. I never knew what a washing machine was, so I used my hands. But the degrading existence took its toll. It broke my spirit.’

When Fawaz was eight, he was taken from his mother to live with an uncle in Nigeria. At 14, he was told: ‘We’re going to London to meet your dad.’ On arrival he was driven to a house. ‘My uncle just dropped me there and said, “I’m coming back”,’ he explains. ‘He never came back. I was told my dad was going to come. He never came.’

And so began the brutality. Fawaz says he was beaten with a flip-flop and warned that only prison awaited on the outside.

‘I’d gone out the door, put my leg out, gone to the front yard, looked around, and ran back in,’ he says. ‘Then one day, I just didn’t look back… that was the first adult choice I’d taken in my life.’

A stranger found him crying in the street.

He is now embarking on a career with MTK Global — the management company guiding Tyson Fury and dozens of other British boxers. And the former national champion, described by Barry McGuigan as an ‘exceptional talent’, was once told he would earn at least £230,000 within two years of paid fighting. He won the 2012 ABA light-middleweight title.

In 2019, the Home Office accepted he was a victim of modern slavery but still Fawaz fights to unshackle himself from that past.

‘I could be in a house full of beautiful things, kids running around, a Lamborghini or Ferrari,’ he says. Instead? ‘I’m still begging for food, still asking for handouts.’ 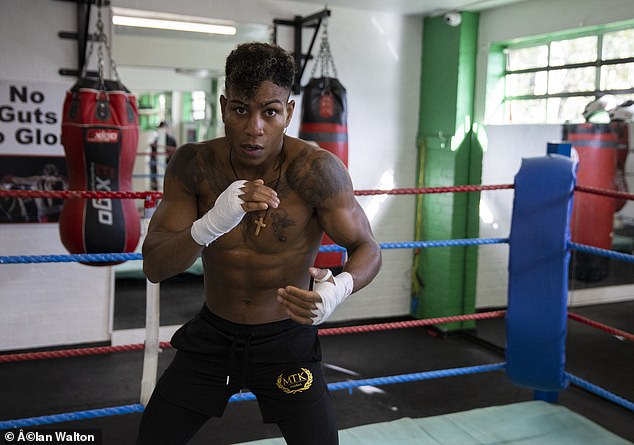 Fawaz represented England — including against his homeland — all while being a citizen of nowhere. For 16 years he fought the Home Office to remain here legally and, last June, he was finally granted leave to live — and work — for 30 months.

‘Nothing has changed,’ insists Fawaz. ‘My life is harder than it was before.’ With the clock ticking on his window of opportunity, Fawaz wants to challenge for the British title within six fights. ‘I need to speed up the process.’

Coronavirus has complicated the start of his career and as it stands Fawaz is waiting for a licence from the British Boxing Board of Control. However, when the chance finally comes, at least he will be paid for the punishment.

Back in Nigeria, pain was simply part of life. As a child, Fawaz was abused before being trafficked to the UK. ‘Being beaten up was normal,’ he says. ‘My upbringing wasn’t blissful… it was brutal because I was the black sheep.’

Fawaz grew up with a young mother, and a father who was only a sporadic presence. ‘My mum treated me not as her child,’ he says. One beating — which remains branded on his psyche — left Fawaz bleeding. He had to lie to make it stop, but when his alibi unravelled, the violence resumed. ‘Then she ridiculed me. She said, “You’re not my son”.’

Even in such unforgiving surroundings, Fawaz allowed his mind to wander. ‘My dream was to be an actor,’ he says. ‘I watched this movie and I saw these guys with nice bodies and I said, “If I look good, they would take me on TV”.’

And so he would pump iron, using weights built from cement, a rod and buckets. More recently, to stay afloat, he has worked as an extra in films and on TV. Alongside training, he is taking online acting courses. ‘I can act,’ he insists. ‘I can cry on cue.’

Unfortunately, his tears have never needed much invitation to flow. In Nigeria he was an ‘outcast’, bullied for his mixed heritage (his father is Lebanese, his mother from Benin. Both are now dead). The streets of Britain have hardly been much more hospitable.

‘I was just a young boy who needed help and the man saw that,’ says Fawaz of his eventual escape. ‘But before he did, a lot of people walked past.’ He was taken to social services and, during a wandering life in care, boxing became a refuge.

‘For once in my life the people there, when they looked at me, they respected me,’ he recalls. ‘That sensation was money for me.’ 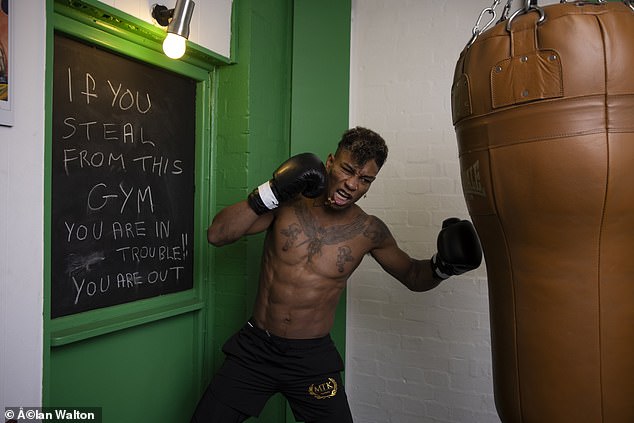 Last year, Fawaz won a 16-year battle to stay in the UK and can now launch a boxing career

Following his ABA title success in 2012, he believes the Olympics should have followed. The issue? After turning 18, Fawaz was left in legal limbo — Nigeria denied him a passport and citizenship; the Home Office would not accept he was stateless and wanted him gone.

Twice he was confined to detention centres, the threat of deportation hanging overhead.

Frank Warren and McGuigan were among those to fight his corner. But while Fawaz remained entangled in red tape, other problems began to snowball.

‘I became an alcoholic,’ he adds, ‘I went to my GP, they diagnosed depression and they put me on some drugs.’ His relationships suffered, too. ‘My wife divorced me… that break-up broke me into pieces.’

For a time, he would stand outside Leicester Square station asking for money. At night, he bed-hopped between the boxing gym, friends’ houses and a park in West Ealing. ‘They have this bench,’ he recalls.

To earn his keep, he would clean the gym, do odd jobs and rely on the kindness of others.

People offered donations. A man named Simon has paid most of his rent for the past few years. ‘He saved my life.’ Some of those taps turned off when he earned the right to work. But not even a deal with MTK brought immediate reward — for most boxers, no fight means no pay.

‘I got a tracksuit, a shirt and my name on a piece of paper. That’s all,’ he says. ‘My life has changed legally… but the future is uncertain.’ At least the threat of deportation has gone, for now.

In those detention centres he discovered both self-harm and salvation. Fawaz cut himself; he taught himself the piano, too.

‘There was a music room,’ he says. ‘If you put a piano in front of me, I will touch your soul.’ Last year, he released a record — and music video — under the name Statelezz. ‘In boxing,’ he says, ‘I can only perform. But in music I can use my words to help people.’

Judging by Fawaz’s amateur pedigree and his boundless charisma, his fights shouldn’t be short of entertainment, either. Behind the coating of charm, though, scars linger.

‘I’m not really happy,’ he says. ‘When I meet people, I smile at them, I joke. But then when I go it’s just… emptiness.’

Little wonder, when the brutality of life in Nigeria has been followed by more turmoil and tragedy. One day his horizons will widen. ‘I am going to have a house in Spain,’ he says. ‘I love the culture. I speak Spanish, I self-taught because I salsa… but the UK is a place where careers are made.’ And, despite everything, this country still holds the key to his happiness.

‘I feel like I’m British… I’ve bled for them in the ring,’ he says.

‘To hold that British passport in my hand and for them to say, “You are one of us”. I think that would touch me the most.’