The Duchess of Sussex wrote a letter to the US Congress. In her letter, Meghan called on Speaker Nancy Pelosi and Leader Charles Schumer for paid leave for parents. In her plea for paid leave, Meghan said it should be a “national right” like many other countries. She contacted both Democrats and Republicans politicians on the issue.

He told Express.co.uk: “Meghan has defended her backing for paid family leave, a worthy cause if ever there was one.

“She has indeed, as she claims, had an activist past.

“It is important to point out, as she has, the shameful fact that the United States is one of a tiny handful of countries that do not offer any form of national paid leave. 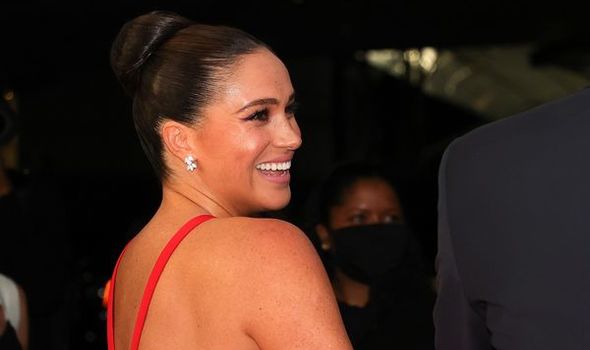 “She wrote an open letter about this and cold-called politicians calling herself Meghan, Duchess of Sussex.

“She knows perfectly well that any intervention she makes in public life will be highly publicised as well as controversial.

“She claims that this issue is humanitarian and should be cross-party.

“It certainly should be, but as she is well aware, there is enormous speculation as to whether her future lies in politics and, if so, what future she actually has in this area and how wide her appeal actually is to the American voter.”

READ MORE: ‘Determined not to lose mother of my children’ Harry fears for Meghan

Last week, Meghan was accused of using her title, the Duchess of Sussex, “out of context”.

A Palace aide told the Sunday Times: “As a member of the Royal Family, if you use the title, it means you steer clear of those kinds of things.

“Otherwise you’re using the title out of context and people will question your motive.

“The Royal Family has no say in American politics.

“Campaigning is important, but there’s a difference between campaigning on ‘issues’ like the environment and mental health, and aligning yourself with policies.

“The Duchess of Sussex doesn’t have the right to have a more powerful voice [on the issue] than any other mother in America.

“She should not be playing in politics.”

Another courtier described the intervention as “outrageous”.

Following the couple’s decision to step down from the Royal Family, they were told to renounce their HRH status as part of their Megxit deal but were permitted to keep their Sussex titles.

It comes as traditionally members of the Royal Family are politically neutral and do not provide a public opinion on political matters.

In her plea for paid leave, Meghan said it should be a “national right” like many other countries.

She said: “Paid leave should be a national right, rather than a patchwork option limited to those whose employers have policies in place, or those who live in one of the few states where a leave program exists.

“If we’re going to create a new era of family first policies, let’s make sure that includes a strong paid leave program for every American that’s guaranteed, accessible, and encouraged without stigma or penalty.

“But this isn’t about Right or Left, it’s about right or wrong.

“This is about putting families above politics.

“And for a refreshing change, it’s something we all seem to agree on.

“At a point when everything feels so divisive, let this be a shared goal that unites us.”