A Metropolitan Police officer who became the first cop in the UK to be convicted of belonging to a neo-Nazi terrorist organisation was kicked out of the force today. 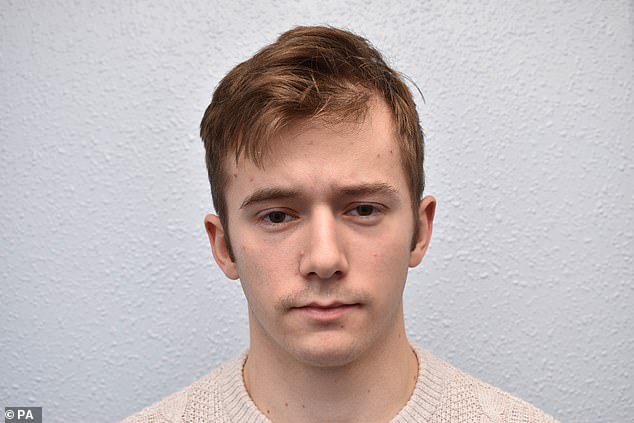 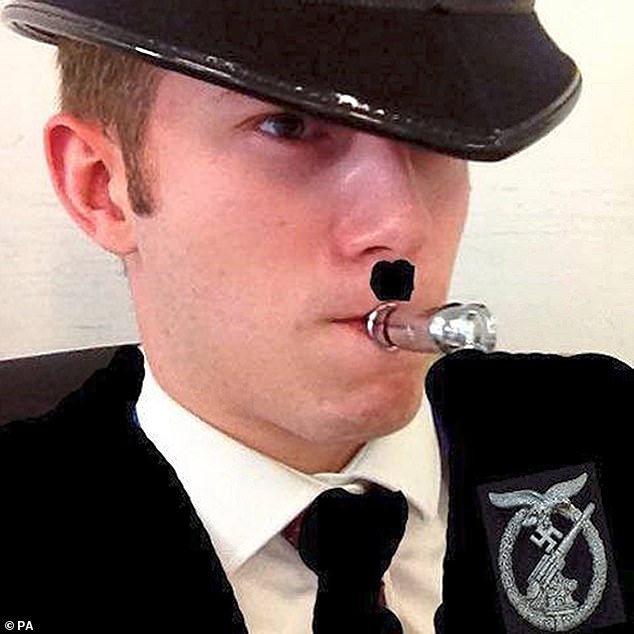 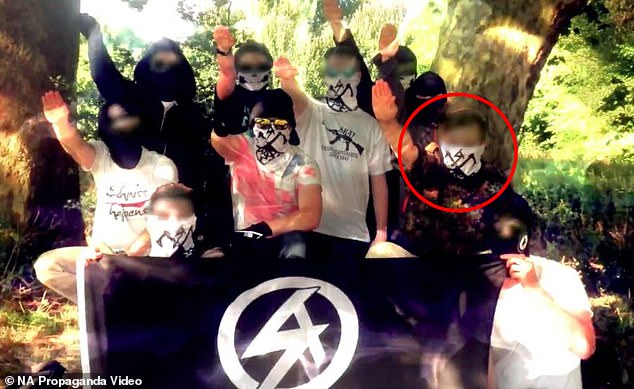 Hannam, circled, was convicted by a jury at the Old Bailey of terrorism offences following a three-week trial

Following his arrest last March officers seized a USB stick from his home which contained manuals detailing the production of biological weapons.

He had a copy of the manifesto of Anders Breivik, the Norwegian who killed 69 people in a mass shooting at a summer camp in 2011 and other fascist publications.

Hannam was convicted by an Old Bailey jury of terrorist offences after a three-week trial.

He had admitted possessing indecent and prohibited images of children after the jury retired to consider their verdicts in his terrorism trial.

Hannam was also convicted of fraud by false representation by failing to disclose his membership of National Action.

A Metropolitan Police misconduct tribunal was told today Hannam accepted possessing the prohibited images but continued to deny being a member of the terrorist group. 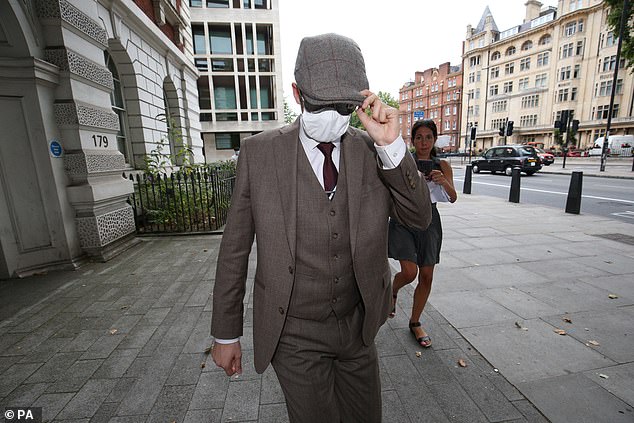 But Assistant Commissioner Helen Ball said that she was ‘more than satisfied’ he had committed the offences for which he had been convicted.

The tribunal was told that Hannam had already received a final written warning for another matter at the time of his arrest.

‘If this situation did not exist and I had been able to grant a final written warning, I would not have done so.’

She added: ‘I believe that the provision of a final written warning during his short service is an aggravating factor.’

AC Ball said that Hannam’s behaviour was ‘wholly antithetical to the values’ of the Met and ‘discredited’ himself and the service.

‘In behaving as he did, he has without question harmed the public’s trust and the reputation of the Metropolitan Police Service,’ she said.

‘He had a chance not to do this and to stop at every stage, but he didn’t make the right choice.’

Hannam was not present, and not represented, as his career was ended. 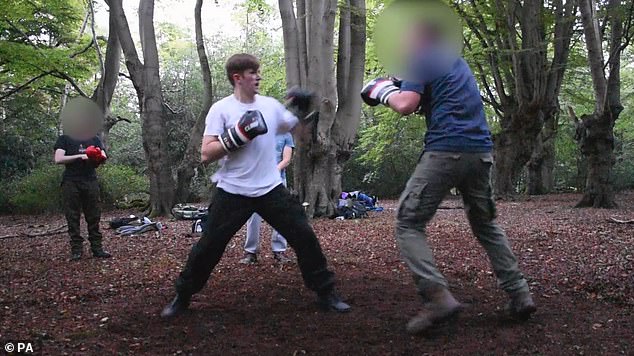 The extremist, pictured centre left,  had told jurors his grandfather was gay, his step-granddad was Jewish, and that he had dated a Muslim girl at school in a bid to hide his intolerance

The extremist had told jurors his grandfather was gay, his step-granddad was Jewish, and that he had dated a Muslim girl at school in a bid to hide his intolerance.

He claimed he suffered autism and turned to the far-right group because he ‘struggled socially’ and wanted to make friends.

In a diary Hannam kept throughout his time with the proscribed organisation, he described its members as a ‘good bunch of lads’.

He accepted in his evidence that he’d taken a camping trip with them and travelled to Swindon for a meet-up but claimed he was oblivious to the extent of their views.

Dan Pawson-Pounds, prosecuting, had told jurors Hannam’s ‘activities with National Action were not limited to the online world and he recorded a meeting with the group in Paddington, on 6 March 2016, in his diary’.

Hannam wrote: ‘Me and five others meet with an National Action, official called Ivan.

‘We all went to a nearby pub and had some drinks (coke for me).

‘They’re a good bunch of lads and Ivan is a strong character, can’t wait to get more involved.

The prosecutor said: ‘Perhaps unsurprisingly, in light of that diary entry, Benjamin Hannam accepts that he was at that National Action meeting.

‘There is no dispute by the defence that one of these documents contained information of a kind likely to be useful to a person committing or preparing an act of terrorism – namely guidance on how to produce a number of radiological, chemical and biological weapons, and improvised explosive devices (‘IEDs’).

‘The other document on Benjamin Hannam’s USB stick provided, as you will see, detailed guidance on how to carry out a fatal attack with a knife.

‘You will be aware from your own knowledge of current affairs that knives have been used to lethal effect in terrorist attacks throughout the world, including in this city.

‘As part of the application process he, like all applicants, had to fill in both an application form and a vetting form.

‘Both forms ask whether the applicant has ever been a member of the British National Party, a far-right, fascist political party, although not a proscribed organisation in its own right, or a similar organisation, “whose constitution, aims, objectives, or pronouncements may contradict police officers’ duty to promote race equality”.

‘On any view, National Action is one such organisation. Benjamin Hannam answered ‘no’ to these questions on both forms.

‘Benjamin was well aware of what the BNP was, must have known that his membership of National Action, either before or after proscription, was caught by these questions and, in answering “no” deliberately misled the police.

‘Had he answered “yes”, as he would have well known, his application would have been rejected, and the £66,000 spent employing him, before this falsehood was discovered, would not have been lost.’

Hannam, of Enfield, denied but was convicted of membership of a proscribed organisation, two counts of fraud by false representation and two counts of possession of terrorist documents.

Hannam remains on bail ahead of sentence at the Old Bailey on April 30.