Michelle Heaton looked happy and healthy while enjoying a relaxing self-care day at her local branch of David Lloyd on Thursday.

The Liberty X singer, 42, beamed as she posed for the camera in a sports bra while looking fresh-faced, in a social media post which comes days after she shared a shocking picture taken in the depths of her alcohol addiction.

After sparking widespread concern among fans with the snap on Tuesday, the star, who is now 20 weeks sober from drink and drugs, she returned to Instagram to detail her day of health as she continues in her journey of cleanliness. 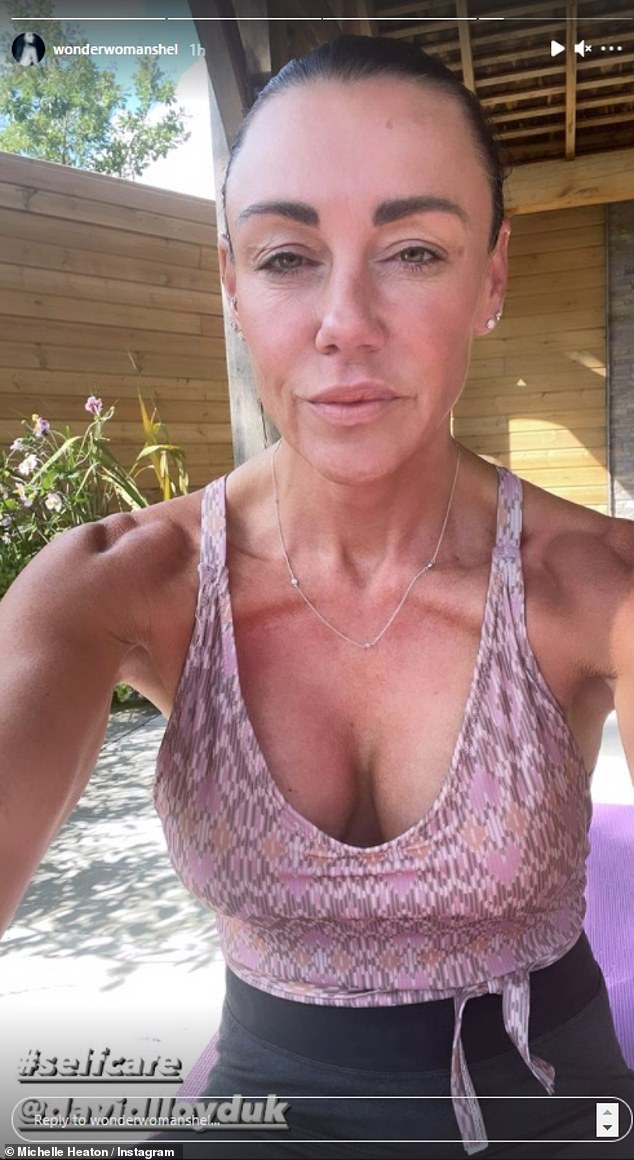 A vision: Michelle Heaton looked happy and healthy while enjoying a relaxing self-care day at her local branch of David Lloyd on Thursday

Michelle looked radiant in the new snap, as she posed for the camera in her graphic print sports bra and high-waisted leggings.

She went make-up free and was displaying the perks of her new sober lifestyle thanks to her radiant complexion and glowing look.

Earlier in the week, Michelle again took to the social networking site – this time to celebrate 20 weeks of sobriety and posted a snap from before she went into rehab in which she had puffy and bloodshot eyes.

She captioned the image: ‘This picture is not to shock, it WAS my reality! 20 weeks ago this was me – Ruined – the second is me today – Saved 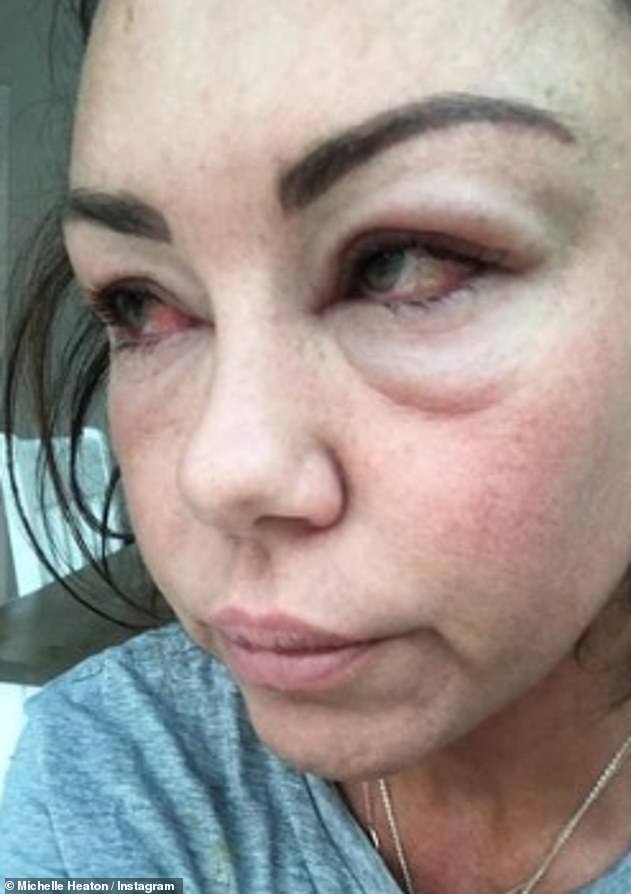 Shocking: The Liberty X singer, 42, beamed as she posed for the camera in a sports bra while looking fresh-faced, in a social media post which comes days after she shared a shocking picture taken in the depths of her alcohol addiction

‘It’s National Sober Day And it encourages us to celebrate Sober life and bring awareness to addiction.

‘It’s also National Recovery Month, and today supports removing the stigma associated with addiction. It opens the lines of communication that lead to better understanding. The day provides an opportunity to build educated support networks.

‘Success is more likely when systems are paved with an aware, loving, and honest cheering section. 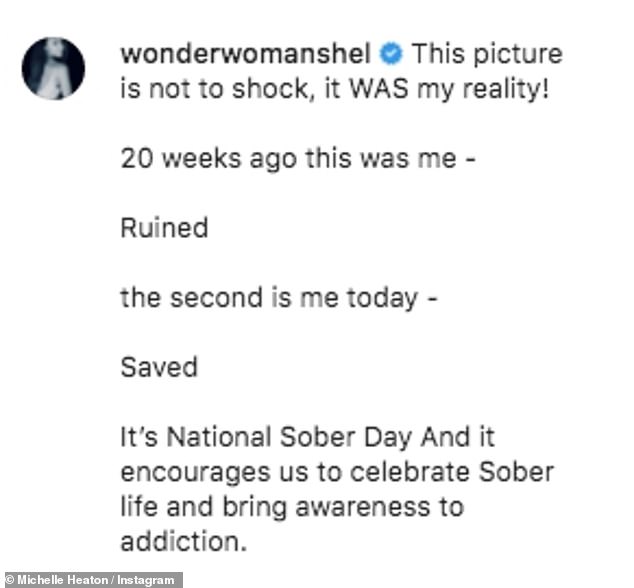 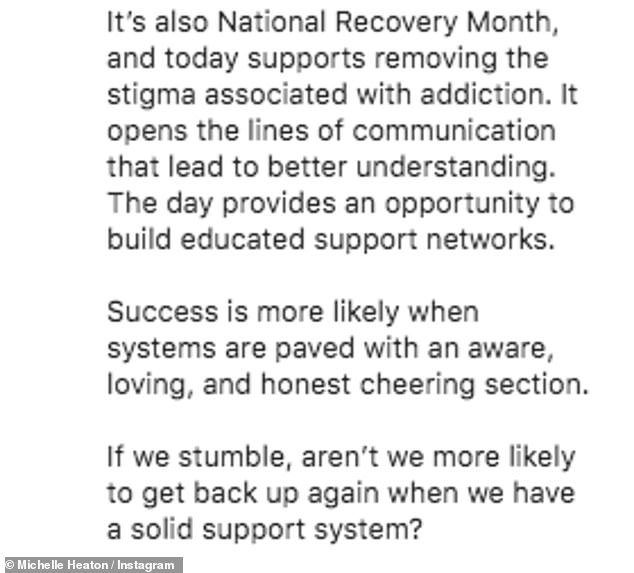 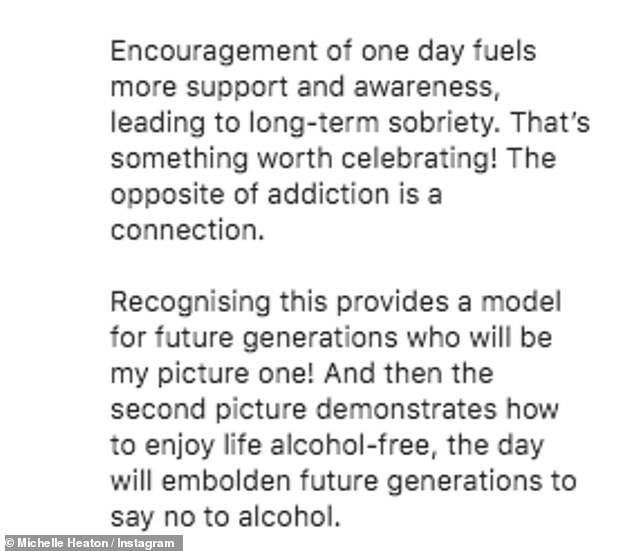 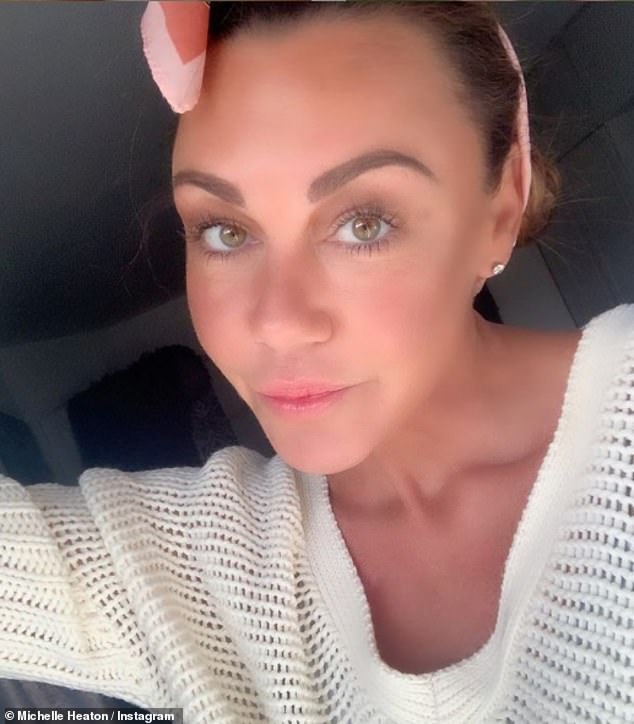 Terrifying: Michelle admitted over the past three years she didn’t go a day without alcohol, and even when she was told last September she would die it still didn’t deter her (pictured September 2020)

‘If we stumble, aren’t we more likely to get back up again when we have a solid support system?

‘Encouragement of one day fuels more support and awareness, leading to long-term sobriety. That’s something worth celebrating! The opposite of addiction is a connection.

‘Today I am stronger mentally and physically better then I’ve ever been. One day at a time.

‘For anyone who needs help with addiction, there is help out there.’ 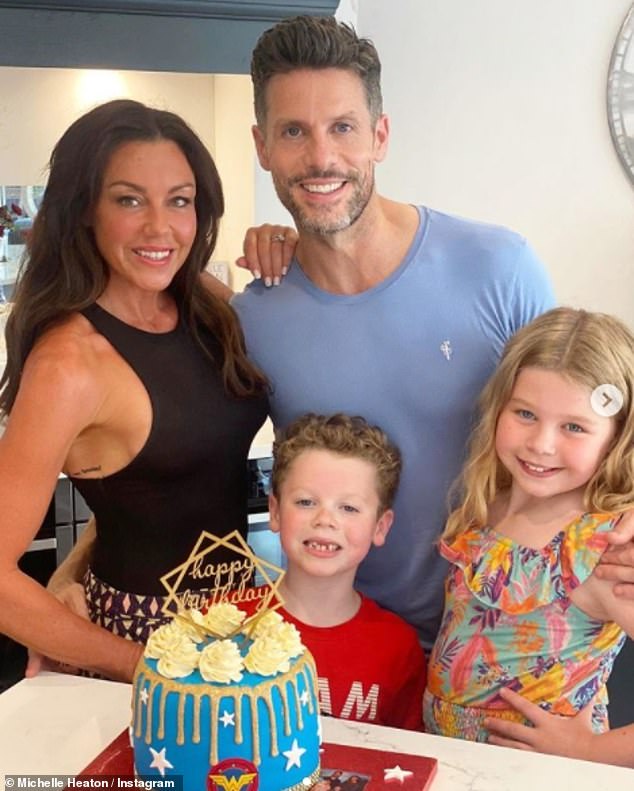 Love: Michelle admitted that her husband Hugh Hanley, who she shares children Faith, nine, and Aaron, seven, with, has been her ‘rock’

Michelle previously revealed she did not go for a day without alcohol for three years before she checked into rehab in April.

Confessing that getting herself to rehab was the hardest part of her journey during an appearance on Loose Women, Michelle said: ‘It’s the first step and its the hardest to admit you have a problem and that you’re powerless to drugs and alcohol.

She explained it wasn’t a ‘specific event’ that caused her admission into rehab, but she ended up ‘locked away by herself, lying and manipulating situations’.

Michelle revealed: ‘I became very very ill, it was a five year process. About three years it got a bit of a hold on me, I was happy in my addiction.’

‘Sometimes it’s difficult to say you have an addiction cos at times it feels fun, that’s the reality of it, it [alcohol] was my friend in need.

‘Any feeling, sad, happy, the sun’s shining, a party – any excuse. It got a hold of me really badly about a year and a half ago.’

‘My husband and friends tried an intervention to get me to rehab.’

‘The last three years I’ve never had a day off alcohol, a drink or some sort, last September I was in hospital with a failed pancreas and liver disease.

‘It wasn’t looking good, even then I couldn’t stop. I was told if I continued I would die but I still didnt’ stop. Nothing mattered, my skin, I could see my veins, my skin was itchy, I was scrathed with scars. 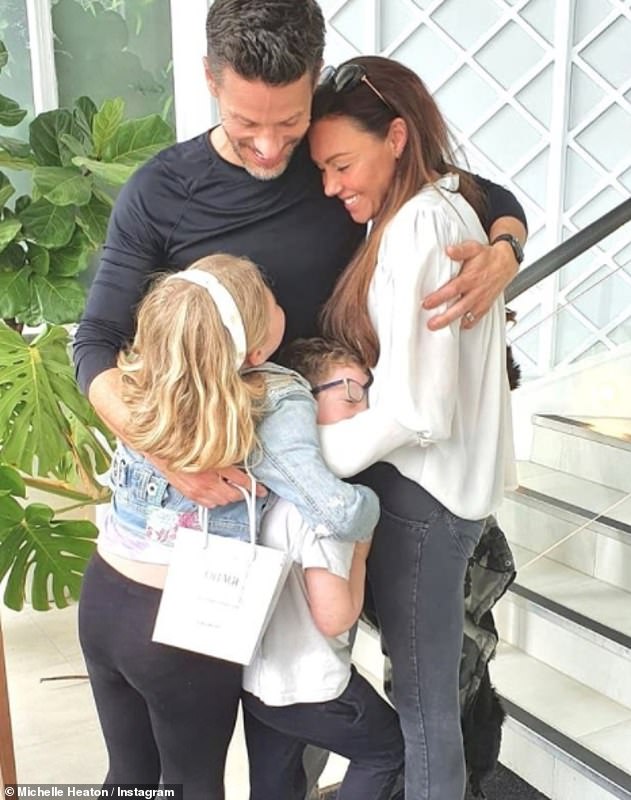 Family: Michelle and her family pictured on the day she left the rehab centre

‘My hair has gone, this isn’t mine, it’s been put in by my hairdresser. The great news is that the liver repairs, it’s an amazing organ. It will repair but not forget.

‘I’m under no illusions, one drink and I could be right back to where I was if not worse.’

Michelle admitted that her husband Hugh Hanley, who she shares children Faith, nine, and Aaron, seven, with, has been her ‘rock’.

For advice about drugs and alcohol visit www.talktofrank.com

She said: ‘This is the ultimate challenge, any partner who is witnessing their loved one suffering an addiction, they’re suffering so much. People forget about that. He’s been through so much pain.

Michelle went on to reveal that she is currently on the 12-step programme and is working on finding a way to move on with her life.

She is also back performing with the Liberty X girls and admitted it is the first time she has ever performed sober.

Michelle said: ‘The Liberty X girls are back on the road – that gave me such a high – I’ve never done a show sober. I thought it was alcohol that gave me that gusto, but it wasn’t it was the girls around me and the crowd singing our songs back.’ 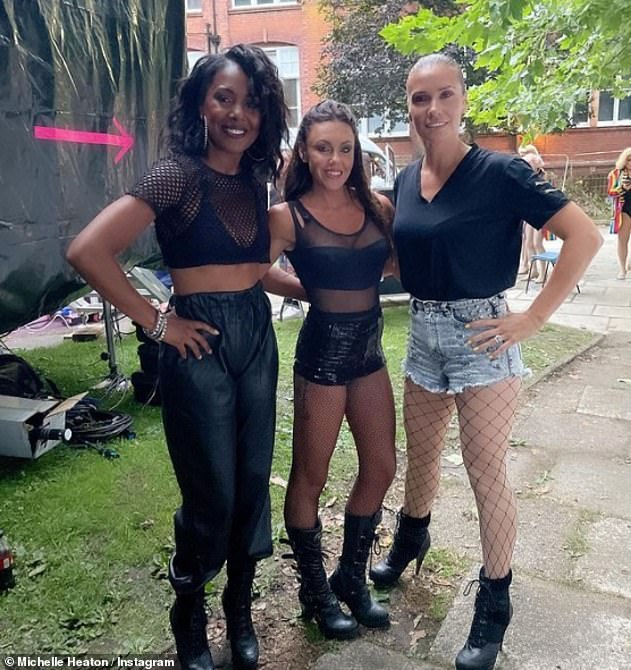 Girl gang: Michelle is back performing with the Liberty X girls and admitted it is the first time she has ever performed sober (pictured last month)

Paris Hilton says that she will have a 'three-day wedding' during...

Paris Hilton says that she will have a 'three-day wedding' during...