Almost 55 per cent of people in England now have coronavirus antibodies, suggesting at least half of the population has immunity against the disease.

A major Office for National Statistics testing survey today found 54.7 per cent of people in England had the virus-fighting proteins in the week ending March 14, up from 50.8 per cent the week prior.

The figure is likely to be even higher now because millions more have been vaccinated since the testing was conducted a fortnight ago, and it takes about two weeks for immunity to kick in.

It highlights the success of the country’s world-beating vaccine rollout, which has seen 30.5million Brits given their first dose and more than 3.5m fully vaccinated as of this past Sunday.

Boris Johnson is now facing calls to lift lockdown faster, after Covid cases, hospitalisations and deaths fell to their lowest level for six months yesterday. Britons have to wait at least another seven weeks before pubs, restaurants and hotels can fully reopen and allow customers inside. Foreign holidays are also banned until at least May 17.

One minister told MailOnline the PM must bring forward the arbitrary dates in order to ‘maintain public confidence that we are getting our freedom as soon as possible’.

It comes as lockdown-weary Britons head to beaches and parks to sizzle on hottest day of the year and enjoy their newfound freedoms. Across the south, temperatures are expected to reach 24C (75F) today and Wednesday, as warm as the Spanish holiday isle of Majorca.

The ONS report — based on random blood testing of around 30,000 adults — found antibody levels across the rest of Britain on March 14 stood at 50.5 per cent in Wales, 49.3 per cent in Northern Ireland and 42.6 per cent in Scotland.

As well as through inoculation, antibodies are made in response to previous infection. Their presence in blood generally means someone has some at least some protection against a disease and won’t fall ill.

But the report showed the number of elderly Britons with antibodies has started to decrease for the first time since the vaccination programme was launched. It  found levels fell slightly among people in their 80s and late 70s in the most recent week.

But the agency said this does not mean these people are no longer immune. It believes these were simply people who were coming to the end of the three-month gap between doses. 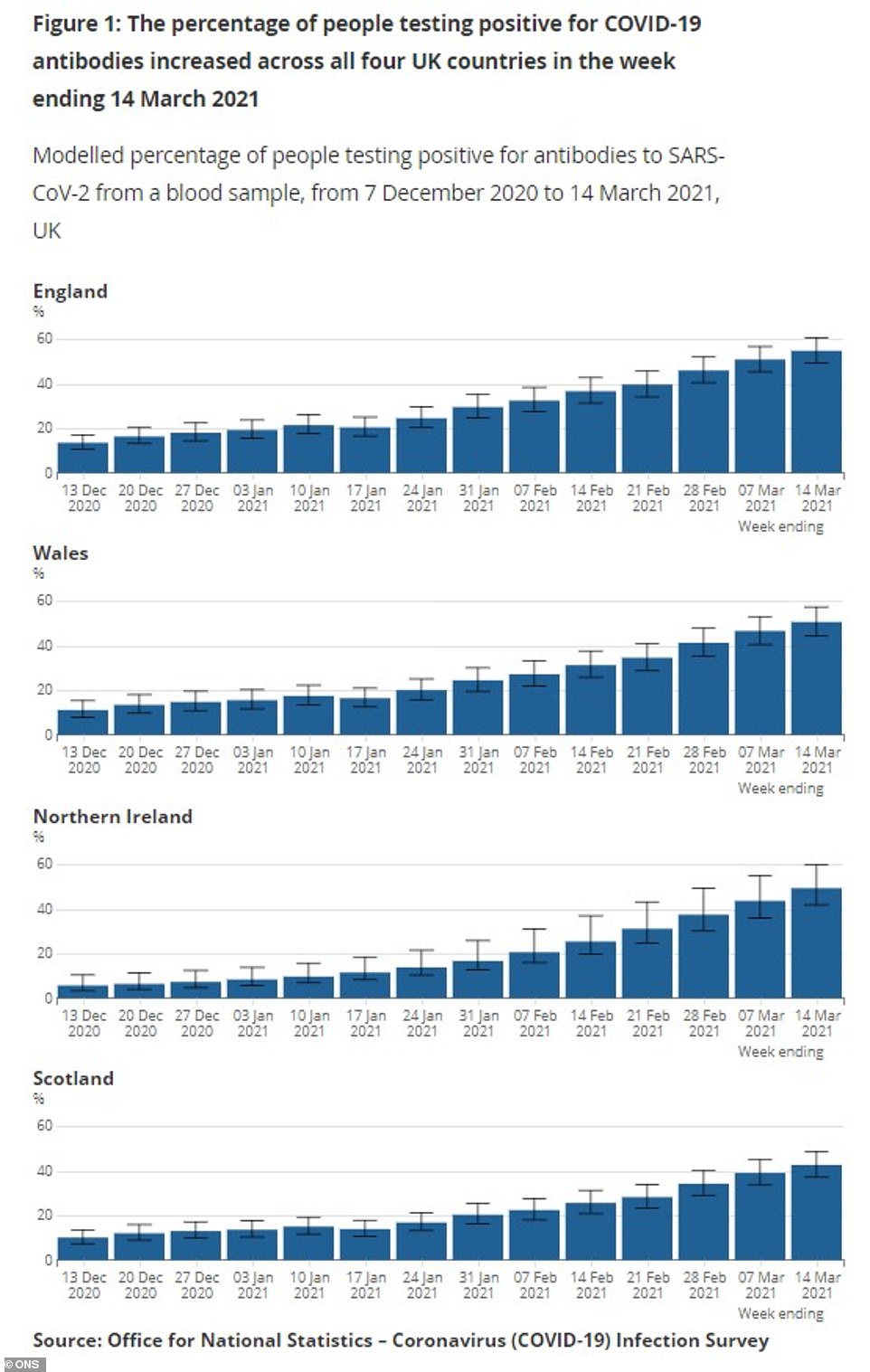 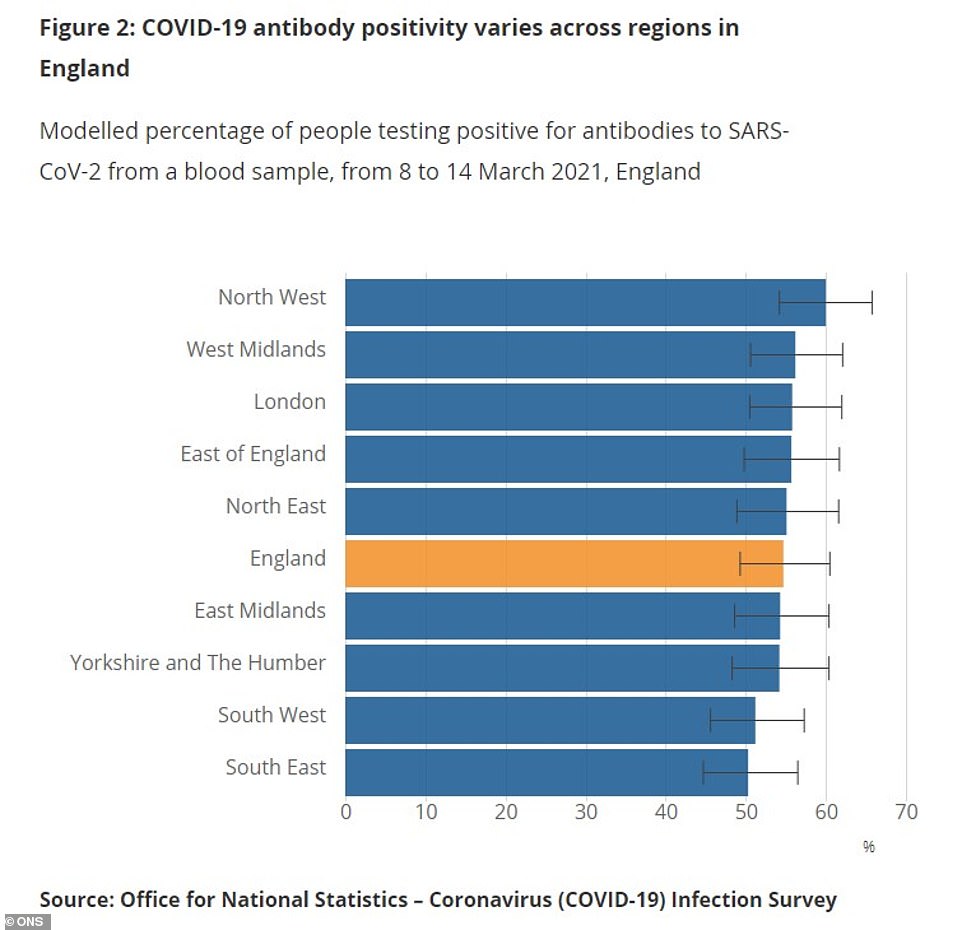 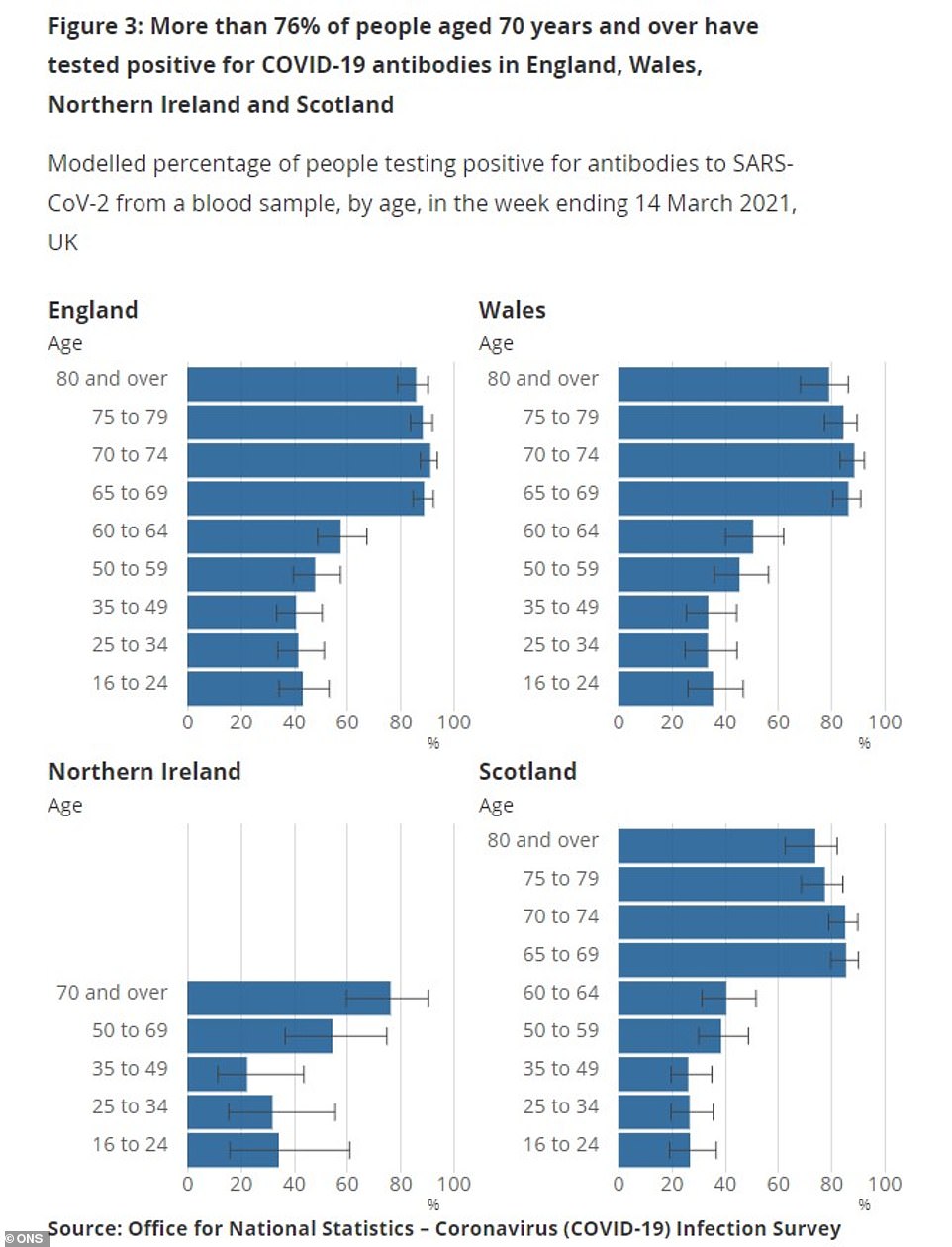 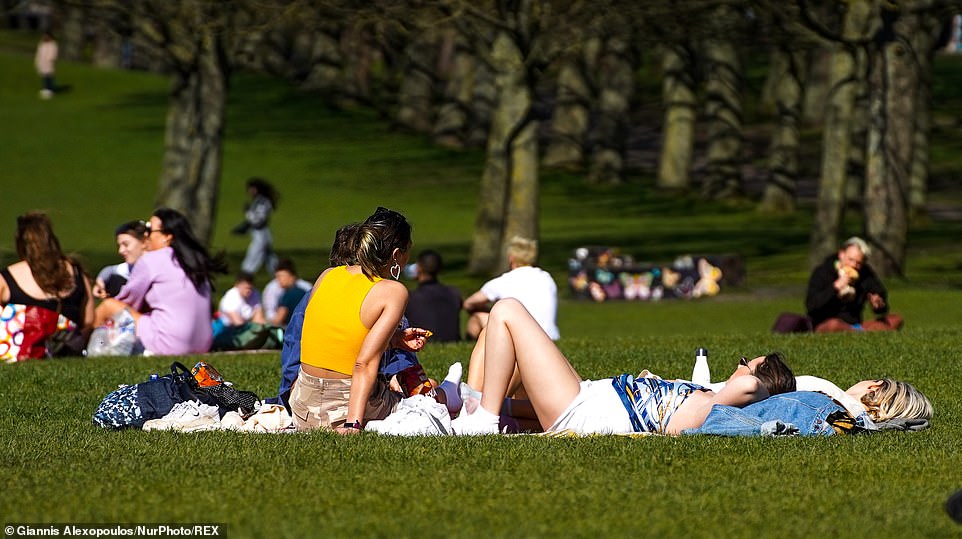 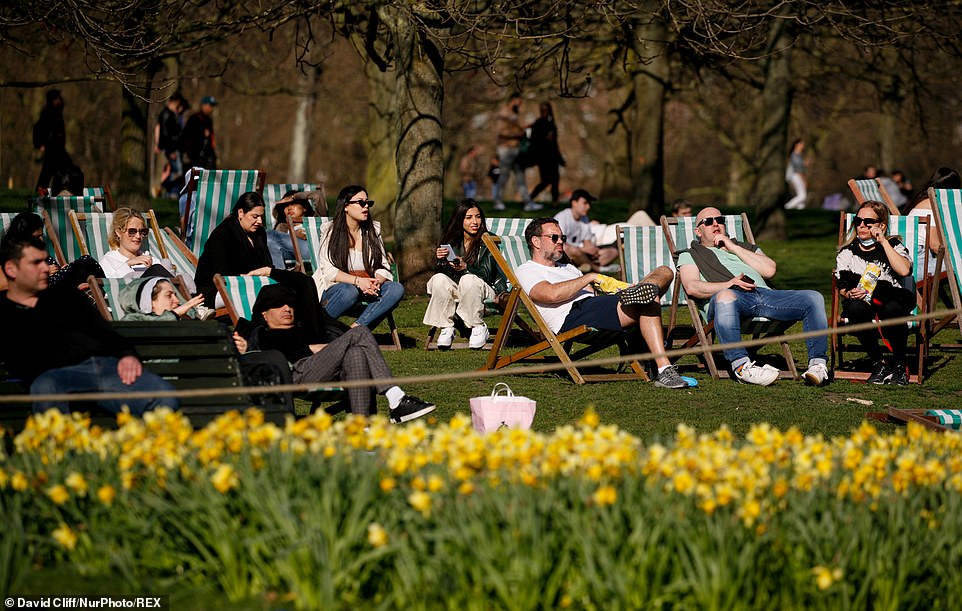 Across the south, temperatures are expected to reach 24C (75F) today and Wednesday, as warm as the Spanish holiday isle of Majorca 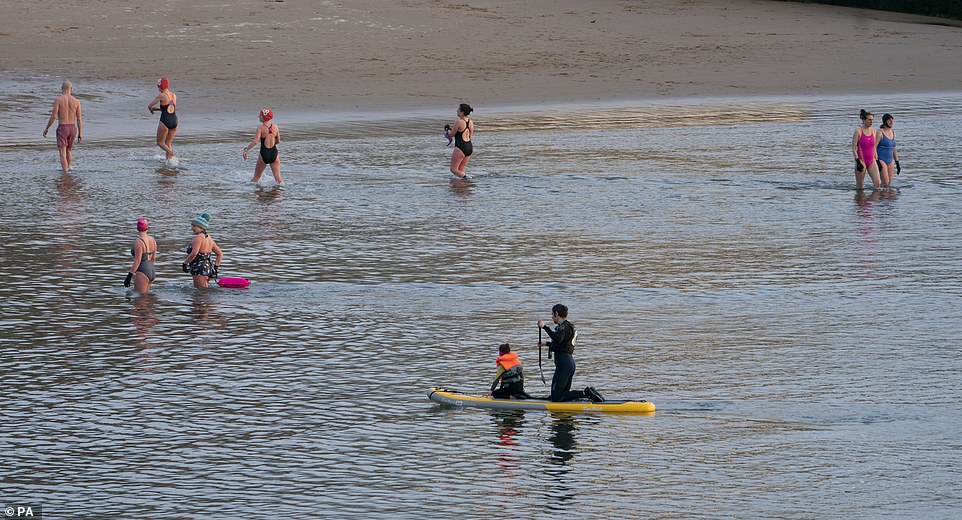 Antibodies fade over time and this happens more quickly in older age groups who have weakened immune systems.

Britain is giving the vaccines out 12 weeks apart, as opposed to the three-week window trialled in studies of the jabs, because the vaccines were found to be so successful after one injection. The strategy has helped get wider swathes of the population vaccinated quickly.

Professor Peter Openshaw said he sympathised with the view that people should just be able to get on with life now the most vulnerable are protected.

‘We all want to get back to our lives as much as possible and I think the route to that is to get the vaccination rates as high as possible,’ he said.

‘There is no reason to hesitate to vaccinate as many people as possible. The last thing we want is vaccines sitting in warehouses and not being put into people’s arms… we need to get these vaccines out as fast as possible, and then move on with the new variant vaccines.’

‘So I think that’s a real positive ray of hope with the way in which the immune system is responding, is that we are learning ways that we can now train it much more broadly against the old and the new variants to give much broader protection.’

Meanwhile, the PM is facing increasing pressure to do away with Covid curbs quicker now that all the key metrics are firmly in retreat.

Figures yesterday revealed that four NHS regions – covering 29 million people across the whole of southern England – recorded no deaths at all on Sunday. Just 23 deaths were recorded across the entire country.

The average daily death toll of 63 is down by a quarter in the last week and has fallen by 95 per cent since the peak in January. It now stands at the same level as late June last year – shortly before the ban on indoor socialising was lifted following the first national lockdown.

Yet Britons have to wait at least another seven weeks before pubs, restaurants and hotels can fully reopen and allow customers inside. Foreign holidays are also banned until at least May 17.

Tory MP Steve Baker, from the Covid Recovery Group, told MailOnline: ‘Once again the data shows the Government is succeeding beyond all of our expectations.

‘The Prime Minister should now have the models updated to see whether he can bring forward his ‘no earlier than’ dates. That is the only way to really maintain public confidence that we are getting our freedom as soon as possible.’

Marcus Fysh, the Conservative MP for Yeovil, said that while he was ‘broadly happy with the direction of travel’, the Government will need to ‘reconsider’ its dates if positive data continues to mount.

‘It is obvious that the vaccine is working,’ he said. ‘People could reasonably ask what the point of having the vaccine is if we have to keep everything locked down for so long.

‘But the scientists are locked into their view and my fear is that they will see even this cautious road map as too fast.

‘We cannot afford to go any slower, and in my view we should be going faster. We are in danger of throwing away all the economic benefit of rolling out the vaccine so fast by keeping everything locked down for far longer than necessary.’ 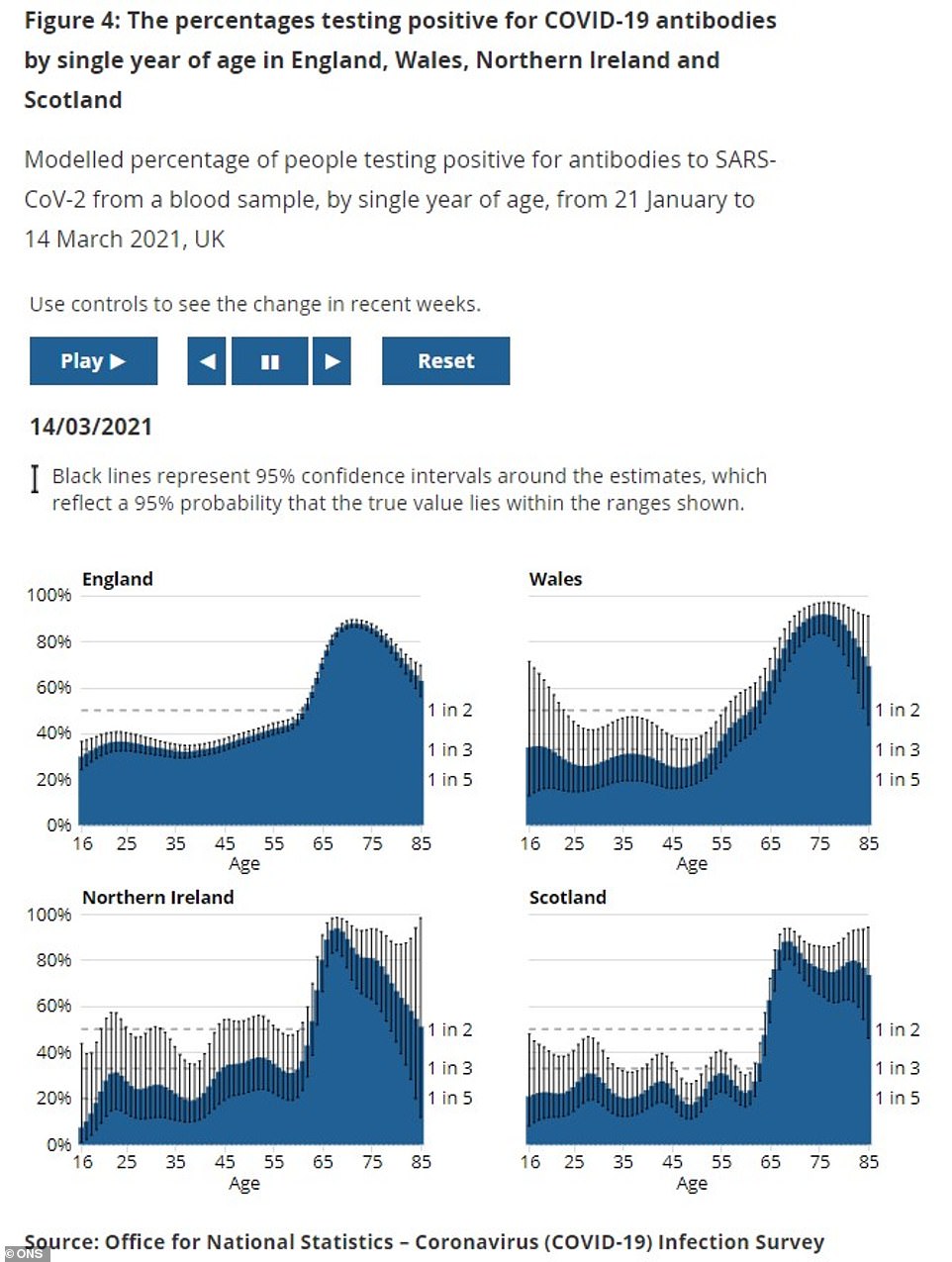 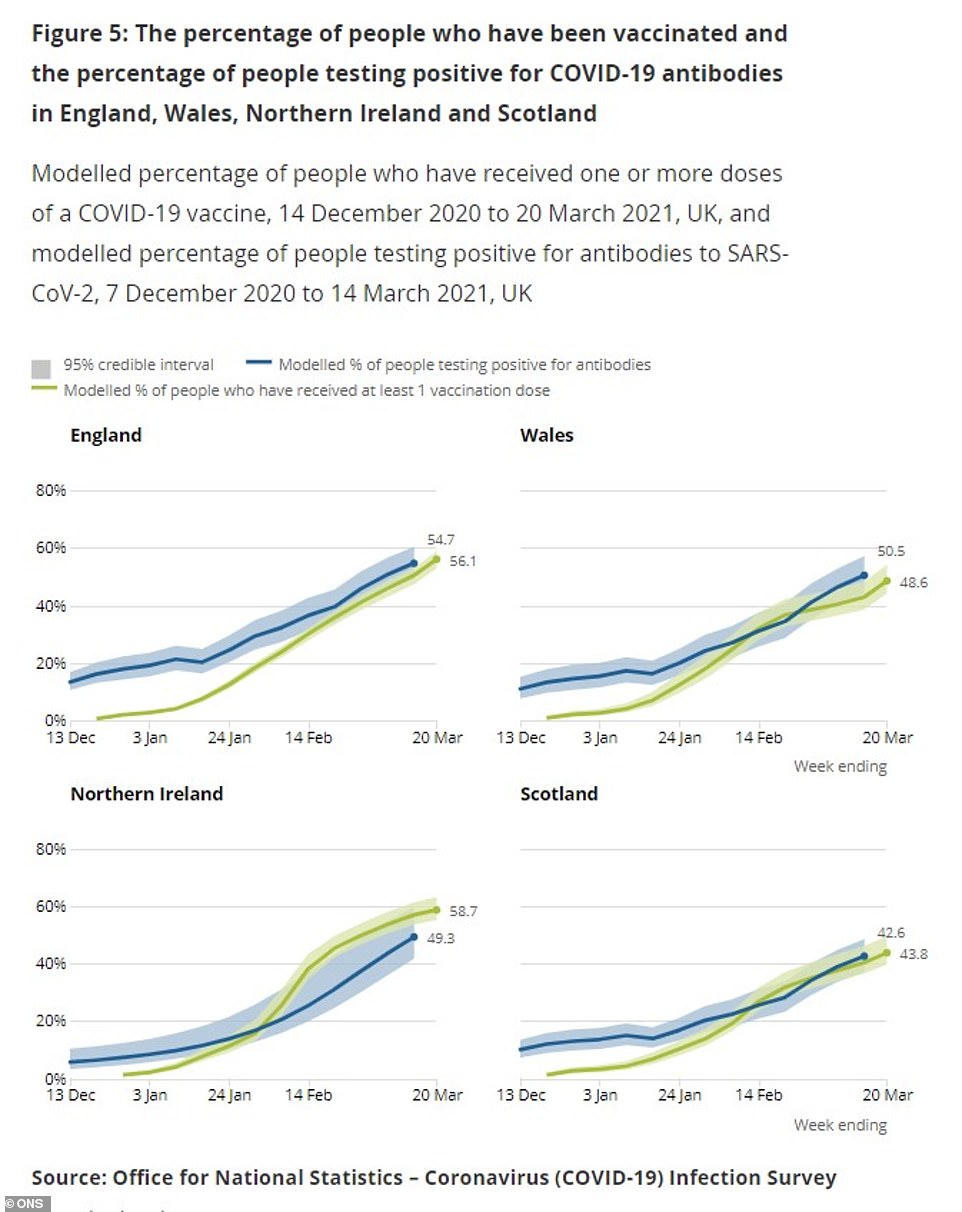 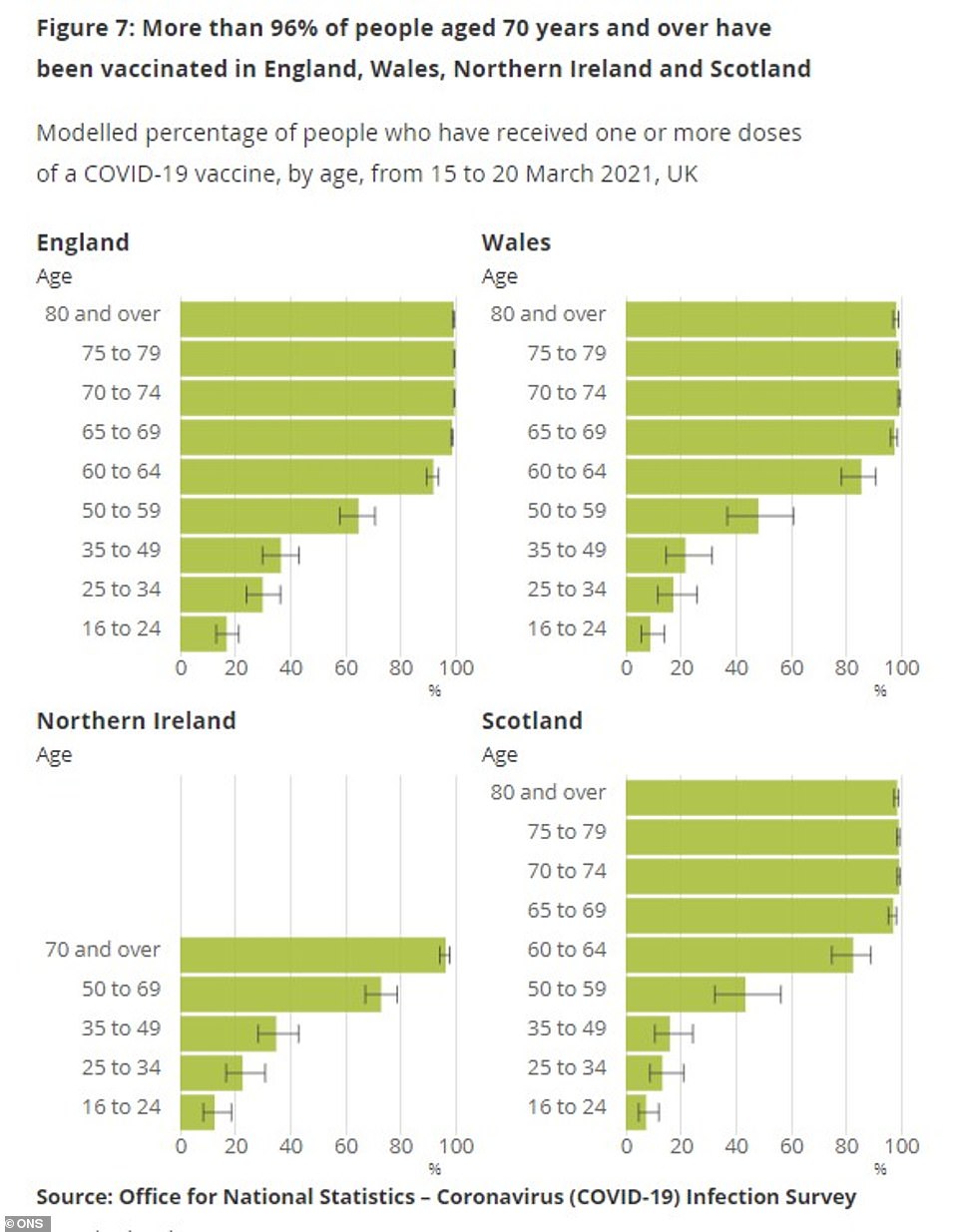 At a Downing Street press conference last night, the Prime Minister said it was a ‘big day’ for millions who had been unable to see friends or play sport for many months,

But the PM warned that further steps had to be ‘cautious’ – and warned it was ‘inevitable’ there would be an ‘uptick’ in cases as restrictions are relaxed. He also raised fears that a third wave in Europe could spark another crisis here.

However, the PM last night raised renewed fears that a third wave of the virus in Europe could make its way to the UK.

He said said that despite rolling out the vaccine to more than 30 million people ‘we don’t know how robust our defences are against another wave.’ He added: ‘We have seen what is happening with our European friends. Historically, at least there has been a time lag and then we have had a wave ourselves.

‘That’s why I stress the importance of everybody maintaining the discipline people have shown for so long.’ Senior business figures last night urged the PM to move faster on easing a lockdown estimated to be costing the country more than £500 million a day in lost output.

Itsu founder Julian Metcalfe said: ‘All the Government can do is promise the country they’ll stick to the data and the facts, and the facts say there is a lot to celebrate with the vaccine and the numbers, which are absolutely plummeting.

‘Every week makes an enormous difference to us and everybody on the high street.’ Rob Pitcher, chief executive of Revolution Bars, which has 70 venues, said: ‘With the data being so positive there is a real need for the timetable to be re-examined. Everything should be brought forward so that we’re getting economy moving at the earliest, and safest, opportunity.’ Yesterday’s Covid data revealed that no coronavirus deaths were reported across the whole of southern England on Sunday, for the first time in over six months.

Four of the nine NHS England regions – London, the South East, South West, and East of England – recorded no deaths from the virus.

The milestone provides yet more clear evidence of the phenomenal success of the UK’s world-beating vaccination programme.

With all of the most vulnerable now immunised, the number of over-65s testing positive for Covid-19 has fallen below 200 a day.

And cases among over-80s are averaging just 78 a day, after topping 3,000 a day in early January.

In London alone, previously the centre of the epidemic, there had been more than 200 deaths a day in mid-January.

But on Sunday the capital recorded zero deaths, for only the second time this year.

Cases and hospitalisations have also plunged to their lowest levels since September, and doctors yesterday spoke of the ‘wonderful feeling’ as pressure on the NHS lifts.

It means hospital wards which were converted into intensive care beds can now go back to being used for routine care.

However Sir Patrick Vallance, chief scientific adviser, said caution was necessary as vaccines were not ‘100 per cent protective’.

He added: ‘If the rates were much higher then obviously the amount of hospitalisation would be higher, which reinforces the point that the thing that we need to do is try and keep rates down and be sensible, as we unlock.’ Professor Chris Whitty added that there was a ‘high likelihood’ cases would rise as lockdown restrictions were steadily lifted.

He said a ‘wall of vaccinations would help protect the UK’, but added: ‘It is not a complete wall, it is a kind of leaky wall. Therefore, there will always be some people who either have chosen not to be vaccinated, or where the vaccine has had much less effect.’