A mother who resorted to IVF in a desperate bid to have a child claims the hormones used to help her conceive fuelled a life-threatening brain tumour.

Serena Jardine, now 53 and with an eight-year-old son, James, endured a seven year struggle to get pregnant and went through five rounds of IVF over the course of four years, costing £35,000.

In 2012 she finally had the baby she and her husband had been trying for but, just 18 months later, she was diagnosed with a non-cancerous brain tumour.

She noticed something was wrong when she became forgetful and developed painful headaches and mood swings.

Her husband, Scott, took her to hospital in 2014 when she had stroke-like symptoms and medics spotted the now orange-sized growth on an MRI scan and operated three weeks later.

Doctors discovered she had had the tumour since 2006 and said it could have been made worse by the potent hormone treatment she took to improve her chances of conceiving, Mrs Jardine claimed.

Mrs Jardine, from Worthing, Sussex, lost some of her eyesight in the risky operation, which removed 95 per cent of the growth, and developed problems with her thyroid.

On her IVF contributing to the tumour, Mrs Jardine said: ‘No-one told me anything about the potential downsides – it was just “this is what we have to do to get you a baby”.’

Studies have found the type of tumour Mrs Jardine developed – called a meningioma – are found more commonly among women who are pregnant or having fertility treatment because they have higher levels of female sex hormones that fuel growth. 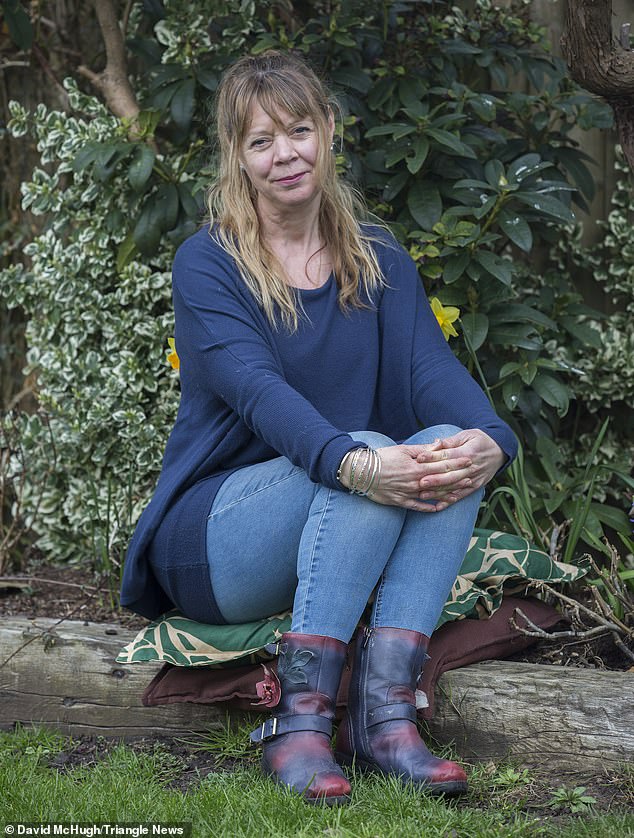 Serena Jardine said nobody told her about the risks of IVF. Doctors said the fertility treatment may have caused a brain tumour she already had to get bigger 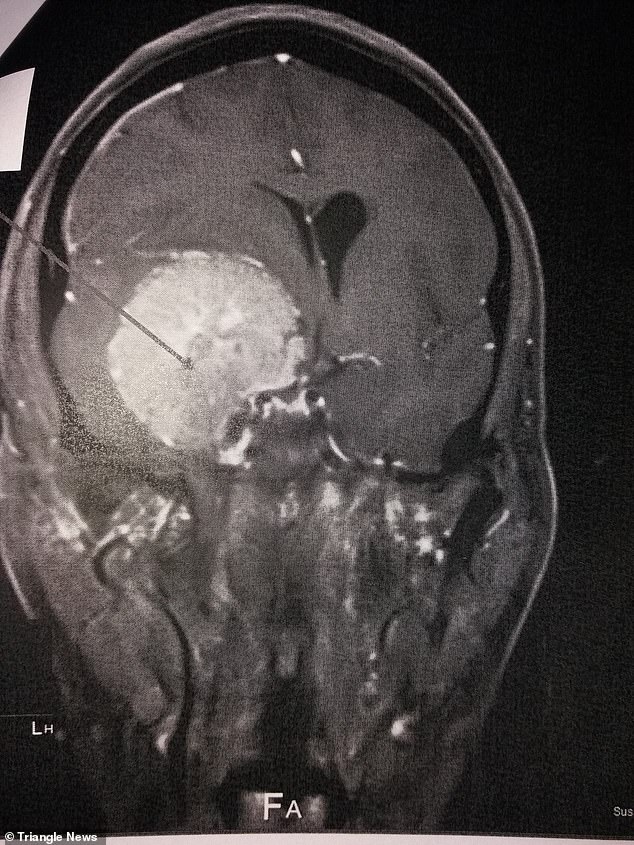 The tumour grew to the size of an orange and made Mrs Jardine become forgetful, caused painful headaches and triggered mood swings 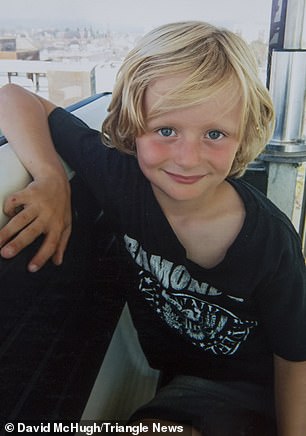 ‘Obviously I am overjoyed to have my son but it was not an easy journey,’ said Mrs Jardine.

‘No-one told me anything about the potential downsides – it was just “this is what we have to do to get you a baby”.

‘You are told to inject this every day and take that, but nobody really goes into what these hormones might do and the potential harm they can do.

‘Of course, I had no idea I had a brain tumour or that hormones I had taken might accelerate the growth.’

The former school teacher turned trainee medical herbalist had the tumour before she started IVF in 2008.

Doctors said other medics had missed it when they did a brain scan in 2006 – two years before she started treatment – when Mrs Jardine had been having severe earache.

Because her meningioma was not cancerous, it could have existed for a long time as a tiny lump, not big enough to press on her brain or cause any obvious symptoms.

But soon after giving birth to James, after an ordeal of three miscarriages, five bouts of IVF and seven years of trying, Mrs Jardine started to get ill.

‘I thought it was just sleepless nights and started making excuses, but I began doing stupid things like leaving the keys in the door, I’d forget to take my handbag out with me, and then I started having the occasional really bad headache six months after James was born,’ she said.

‘I’d have to lie down in a dark room and I’d be sick with them. They were quite severe.

‘And in the meantime I was always forgetting things. I went to the launderette and I’d been to the butchers to get some meat and promptly left it all in the launderette.

‘My character changed too. I was instantly angered if something upset me and was very emotional.

‘And I’m a very mild-mannered person. I’d fly off the handle at the slightest things.

‘Then one day I’d gone to take the dogs for a walk and I came back and Scott asked me a question and I discovered I couldn’t speak. He took one look at me and said my face had dropped.’

The couple rushed to hospital and Mrs Jardine was later diagnosed with the tumour and had a 10-hour brain surgery just three weeks later. Doctors said her IVF may have contributed to it. 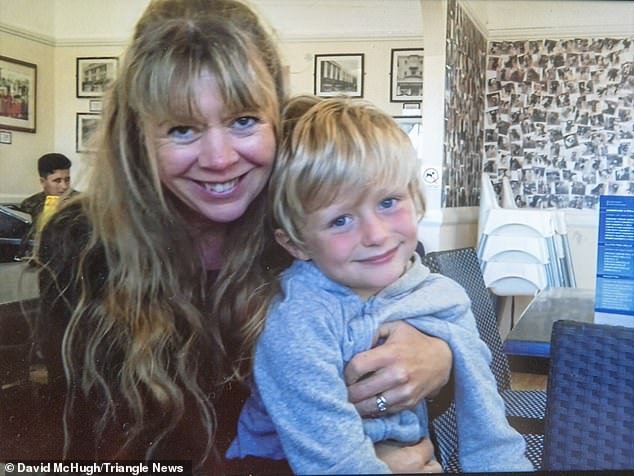 Mrs Jardine was diagnosed with the brain tumour only 18 months after the birth of her first son, James, now eight 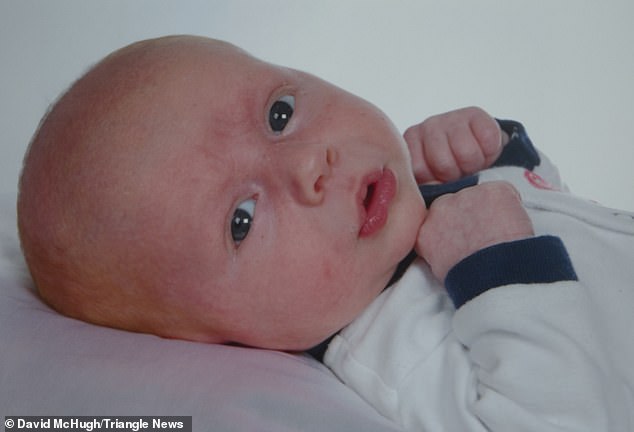 Mrs Jardine’s son James was finally born in 2012 after her ordeal of three miscarriages, five bouts of IVF and seven years of trying for a baby 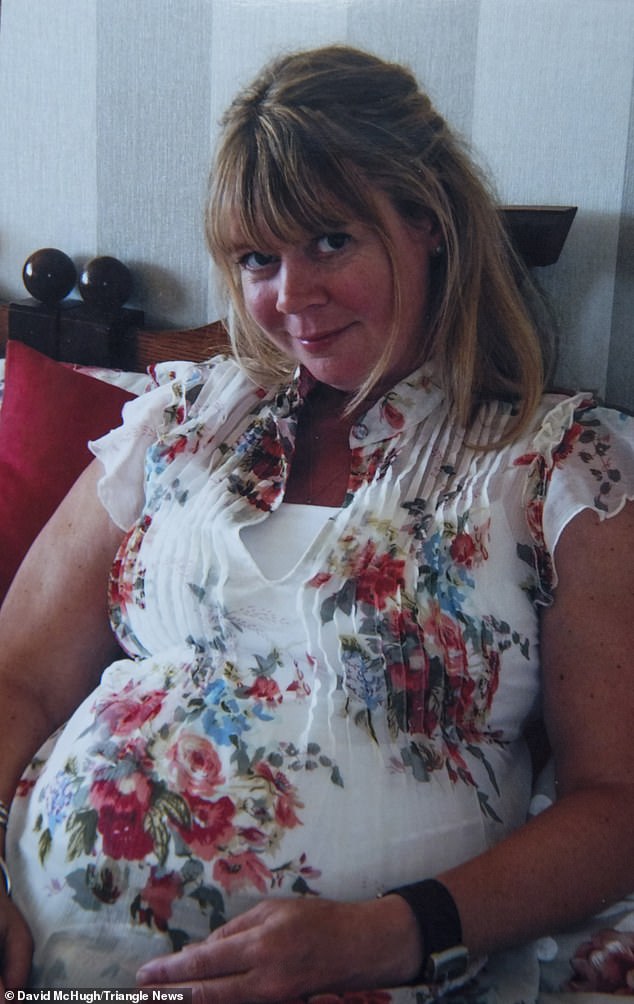 There is no proof that IVF can cause meningioma brain tumours but scientists suggest it may accelerate the growth of ones that already exist.

This is because female reproductive hormones women are given during fertility treatment to improve chances of success are known to help tumours to grow.

One of the main ones, follicle stimulating hormone (FSH), boosts oestrogen levels in the blood to increase fertility.

Oestrogen is used by the body to stimulate growth in the reproductive system to make women more fertile while they are ovulating.

But scientists have found that some meningiomas have oestrogen receptors on them, meaning the hormone can interact with the lump and potentially make it expand faster.

Oestrogen is also boosted in women who become pregnant naturally, so the problem is not exclusively linked to IVF, but it may be a risk of the procedure.

Researchers at the University of California, San Francisco, found that meningiomas developed more often and at a younger age among women who had had IVF. But in a small study they found 16 out of 17 were successfully treated with surgery.

The female reproductive hormones women are given during IVF to improve chances of success are known to help tumours to grow, most notoriously in breast cancer.

One of the main ones, follicle stimulating hormone (FSH), boosts oestrogen levels in the blood to increase fertility.

And progesterone is also given during the treatment, which is another steroid growth hormone.

Scientists have found that some meningiomas have oestrogen receptors on them, meaning the hormone can interact with the growth and potentially make it expand faster.

Oestrogen is also boosted in women who become pregnant naturally, so the problem is not exclusively linked to IVF, but it may be a risk of the procedure.

Exact statistics for fertility-related meningiomas are not known but they’re the most common type of non-cancerous brain tumour and make up around one in five in the UK.

About 11,000 people are diagnosed with a brain tumour each year, according to the NHS, suggesting there are around 2,300 meningiomas – about two thirds of them among women.

Dr Anthony Ghosh, a neurosurgeon at the BUPA Chelsfield Park Hospital in Kent, said that around 12 per cent of cases in women are among those who had IVF.

But Dr Ghosh said the tumours are not known to be caused by fertility treatment, they may just be exacerbated by it which then leads to a diagnosis.

He said: ‘If someone has a small meningioma you wouldn’t advise her never to have IVF but you’d give her some warning that they can grow and it may be worth keeping it under surveillance.

‘Of women that do have meningiomas, about 12 per cent of them have had IVF in the past.

‘We have also seen women with gender dysphoria who are given estrogen therapy grow multiple meningiomas and when they stop the treatment we see the meningiomas regress.

‘We know there are cases of women with a brain tumour that after IVF became massive.

‘You can’t say IVF can develop a new brain tumour or meningioma but if you have one, it can cause it to grow.’

Meningiomas are tumours that grow in membranes – thin sheets of flesh – between the skull and the brain or the spinal cord.

Nine out of 10 of them are not cancerous and they grow slowly, meaning they may not cause any symptoms.

Brain tumours generally only cause symptoms when they get big enough to press on the organ and interfere with nerve signals, which can cause various problems including physical pain or paralysis, or mental issues like mood swings, brain fog or memory loss.

WHAT IS A MENINGIOMA?

A meningioma is a tumor of the meninges, which is the tissue that surrounds the brain and spinal cord.

Around 34,000 people are diagnosed every year in the US.

These tumors generally do not spread and are benign, meaning they aren’t cancerous, in 90 percent of cases.

However, they can cause disability, be life-threatening and regrow.

A sufferer’s senses, movement and ability to swallow may be affected.

The cause of meningiomas are unknown, but they have been linked to genetics and breast cancer.

Treatment options include surgery and radiotherapy or chemotherapy.

'Really unpredictable': Chinese rocket hurtling back to Earth; parts of US in possible debris zone