Maria Esther Roque Diaz was on life support when she gave birth to her son, Dylan, last December.

She had contacted COVID-19 in November and, like many other pregnant women, suffered severe symptoms of the virus.

Roque Diaz, 27, of Maryland, was unconscious when she gave delivered Dylan, and described her baby as a ‘miracle’ to NBC News.

While the Covid vaccine was not yet available to her when she fell ill last year, Roque Diaz is now urging pregnant women to get the jab to avoid a fate like her own. 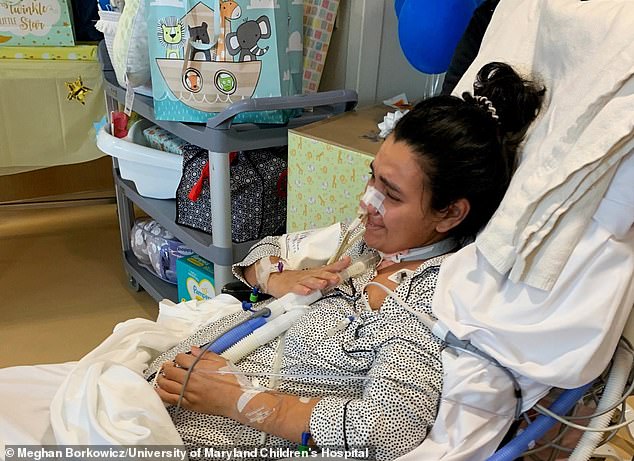 Maria Esther Roque Diaz (pictured), 27, had to give birth prematurely while unconscious due to complications with COVID-19 last year. She is now urging other pregnant women to get vaccinated and avoid that fate 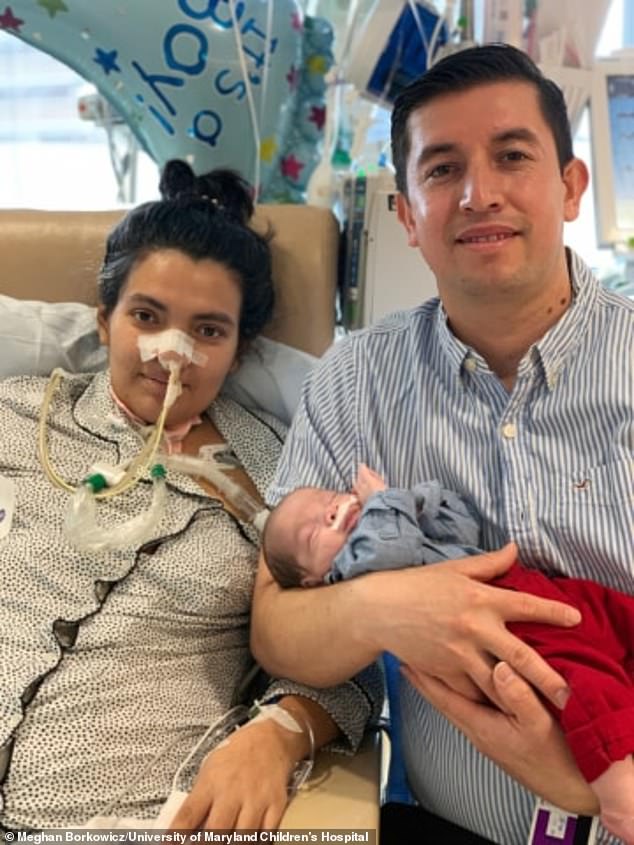 Roque Diaz (left) was hospitalized for months due to complications with Covid. She had to be placed on a life support system called ECMO for some of that time to assist in the circulation of her blood

‘If the vaccine would’ve been available to me when I was pregnant, I would’ve gotten it without thinking about it twice,’ Roque Diaz told NBC.

‘I couldn’t breathe. I lived in a second floor, and I felt like I couldn’t even go up those stairs,’ Roque Diaz told NBC, in Spanish because she is a Salvadorian immigrant.

‘I told Wilian, my partner, to please take me to the hospital. I couldn’t take it anymore.

‘I was so scared and worried for my baby,’

NBC News reports that she spent a few weeks at a local hospital before being transferred to the University of Maryland Medical Center in Baltimore.

Her condition deteriorated to the point where she required the use of an extracorporeal life support machine (ECMO), a life support system that assists a person’s heart in circulating blood around the body.

In order to save her unborn child, doctors induced labor when she was only 32 weeks pregnant, and Dylan was delivered via C-section, weighing just five pounds. 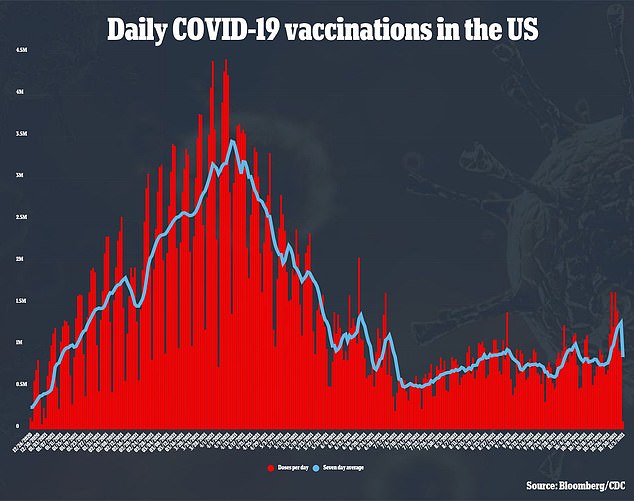 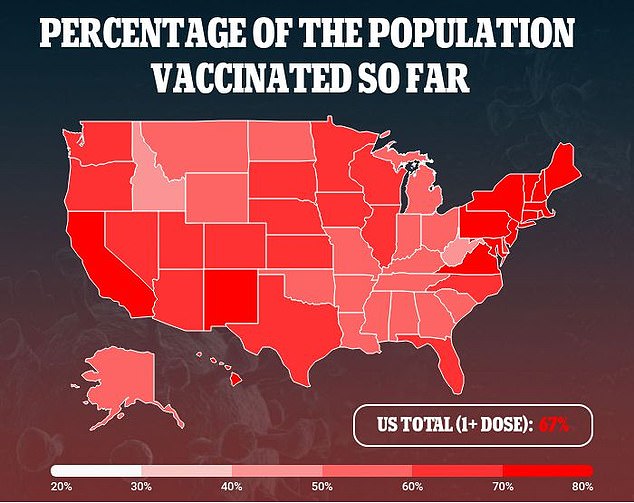 Roque Diaz would remain unconscious until mid-February, not meeting her child until he was a few months old already.

‘When I first woke up, the first thing I saw was the big scar in my belly,’ she told NBC News.

‘Then I got scared because I realized I couldn’t speak because I was intubated. So, I just started to cry.

‘My heart started racing and I was sedated again.’

Pregnant women are at an increased risk from Covid, and contracting the virus while carrying a child puts both themselves, and their babies, at risk.

A University of California, San Francisco, study published earlier this year found that women who are infected while pregnant are at an increased risk of giving birth prematurely.

Babies face risk as well, with a University of Texas study finding that babies born to mothers with a symptomatic Covid case were at an increased risk of needed neonatal intensive care unit treatment.

Despite that, pregnant women remain among the least vaccinated groups in America.

According to most recent data from the Centers for Disease Control and Prevention (CDC), only 35 percent of pregnant women are fully vaccinated.

For comparison, nationwide, 68 percent of Americans aged 12 or older are fully vaccinated – nearly double the rate of pregnant women.

Latina pregnant women are also slightly behind the overall pace, with only 31 percent fully vaccinated.

‘Unfortunately, the Latino population is making up a number of patients in the ICU, from the pregnancy side of things, that are unvaccinated,’ Dr. Allison Lankford of the University of Maryland Medical Center told NBC News.

While pregnant women were eligible for the vaccine from the beginning of the rollout, the CDC did not make a blanket recommendation for them to get the jab until over summer.

Instead, health officials first told expecting mothers to consult with their doctors about whether they should receive the shot.

There is also misinformation circulating on social media about how the vaccines can cause fertility issues and other problems related to pregnancy. 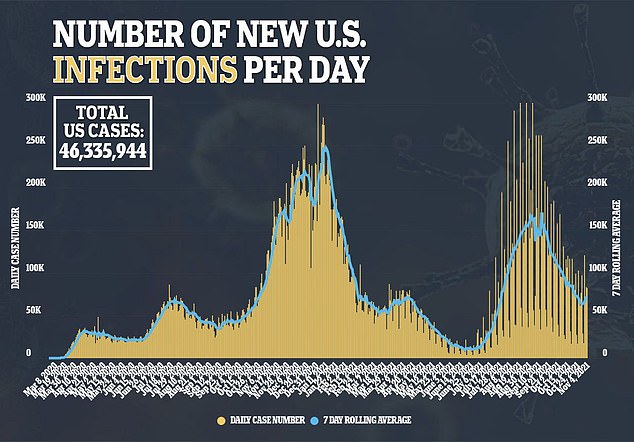 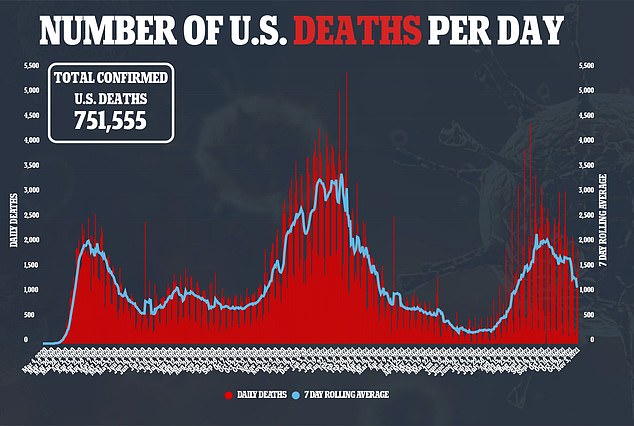 Roque Diaz is asking for pregnant women to ignore the misinformation and look past hesitancies they may have to get the jab and protect themselves and their families.

‘I may be here with all this additional weight and all these scars,’ she told NBC News.

‘But at least I’m here with my family and kids, enjoying them. But unfortunately, other mothers who had cases similar to mine are not here with us.’

Roque Diaz is no longer in the hospital, but is still undergoing physical therapy as she continues to heal from her long bout with the virus.

She is also attempting to reconnect with her two young children, who she says have become distant after she spent so long away from them.

‘I look forward to seeing my children grow up, have health and be with my family,’ she said. 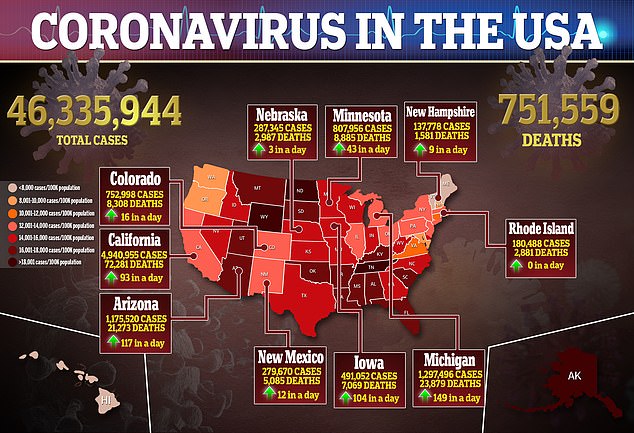