After returning last week for a new series of makeovers, the second episode of 10 Years Younger in 10 Days was a particularly emotional one, helping an abuse survivor and a woman who felt she’d totally lost her personality after losing weight.

Sam, 48, said she used to be a ‘big bubbly girl’ didn’t know how to adapt to her new body, and struggled to find her style, having gone from a size 20 to a size 10.

The Channel 5 show’s other participant, Amanda, 56, said she felt ‘sad’, revealing that she’s suffered various periods of abuse in her life since the age of 11, while smoking and illness had aged her skin prematurely.

Both women were analysed by a panel of strangers who thought Sam was six years older at 54 and put Amanda at 64, eight years older than her actual age.

However, thanks to a week of professional tips and treatments, both women stunned at the end of the show with their youthful makeovers, much to the delight of viewers with one saying she’d ‘go to bed happier’ after seeing the show. 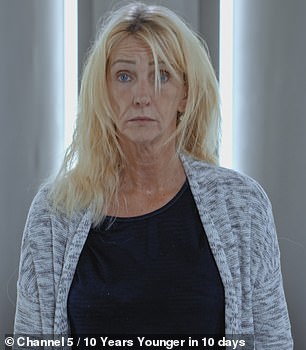 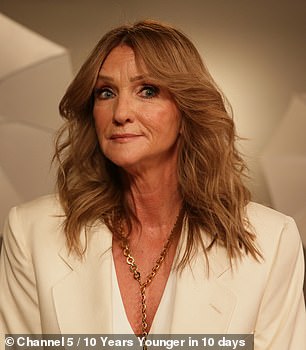 Amanda, 56, said she was unhappy with her looks after overcoming violent abuse and illness throughout the year, pictured before, left. On the show, people said she looked 64, eight years older than she was. But after her makeover, right, people thought she was 52

Sam explained in the show that her daughter Hollie was getting married and that she wanted to look good on the day and discover her new style after losing 11st thanks to gastric bypass surgery.

‘I was a big chunky girl, a fun one,’ she said. ‘I hated my body, but I used to be a big bubbly person that would bounce into a room because no one was gonna like me for my body so I’d go by personality.

‘It has changed me, I’m self-conscious about the way that I look, I lost my way completely. It’s strange to be a thin person in the room.’

She added: ‘I feel very confused, this body is not me.’ 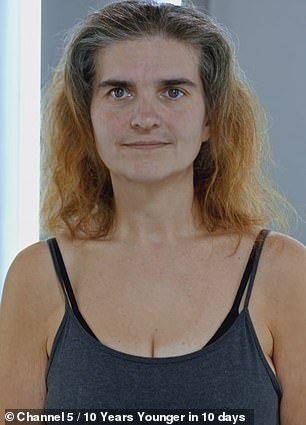 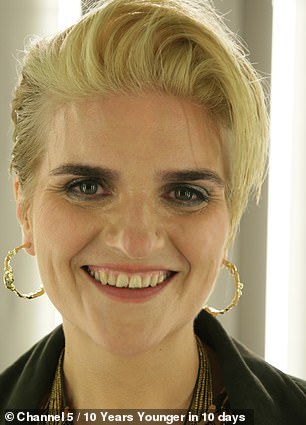 Before her makeover, left, mother Sam, 48, struggled to accept her new body image as a thin person after years of being ;big and bubble’. After her makeover, right, she found her confidence back

Hollie, Sam’s daughter, said that her mother was spending more time with animals than with humans, and needed a confidence boost, while her husband Shaun agreed his wife had lost her self-esteem.

Sam’s husband Shaun admitted his wife had lost her self-esteem as well.

‘Since I’ve lost my weight, the ageing process has sped up, I look old and tired. Like I don’t care, which is really difficult, because I do, but I’ don’t know what I’m doing,’ Sam told the camera.

Before the makeover began, people put Sam’s age at 54, six years older than her actual age. 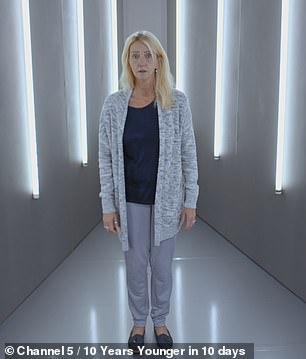 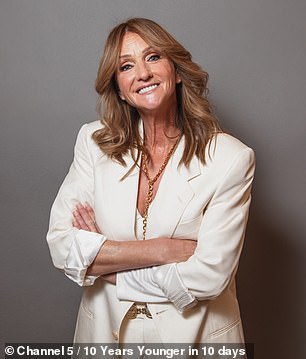 Amanda revealed she had to overcome a lot in life and often felt ‘sad’ about her tired looks and ‘sunken face’ (left). However,  After the makekover, right, Amanda radiated confidence and couldn’t stop twirling and laughing in front of the mirror

Her first stop was at the practice of Skin Specialist Nilam Holmes, who treated her facial hair with laser.

Sam was self-conscious of her eye-brows, which she didn’t know how to pluck, and the hair on her top lip, which she felt was too prominent.

Nilam promised half the hair treated on the first appointment would not grow back and Sam left already feeling lighter.

She then met with stylist Gemma Sheppard, where she admitted to only wearing  black workout clothes and never having a bra fitting.

Gemma took her back to the basics with shaping underwear that highlighted her petite figure. 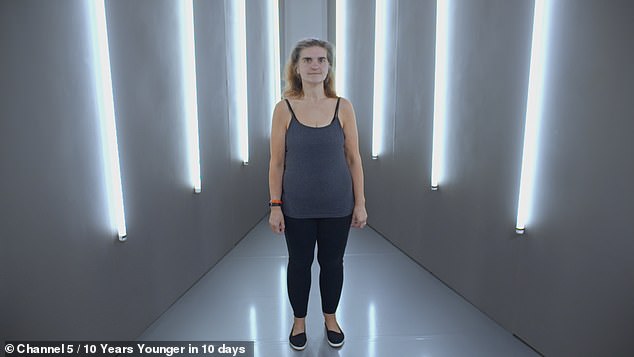 Sam didn’t know how to dress her slimmer body and always opted for gym clothes and unflattering tops , pictured 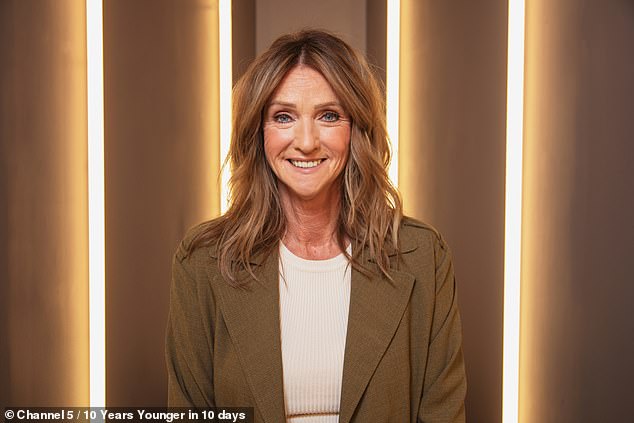 After the makeover, pictured, Amanda felt confident and said this new version of her was ‘staying’

After trying on a few styles, Sam felt more confident in her looks and was ready to entre the next stage of her makeover.

She met with make-up artist Hannah Martin, who taught her how to apply tinted moisturiser and cream concealers and eyeshadows, which are easier to put on and work well with ageing skin.

She also had her hair styled by John Vial, who talked her into going for a shorter cut.

At the end of the week, Sam was ready to see her new look, which she said was ‘amazing.’

Fans said they loved to see how confident Amanda and Sam felt after their makeover, with some saying Cherry was the ‘perfect host’

Gemma had put her in a glitzy ochre dress, paired with a modern jacket and gold accessories.

John cut her hair in an edgy blonde mohawk with shorter sides, which Sam admitted she’d never have gone for, but loved on herself.

‘It’s been so long staring at something I didn’t like,’ she said. ‘It’s the best thing ever.’

‘I’m vibrating inside because I’m so happy,’ she told Cherry Healey.

Meanwhile, Amanda came on the show haunted by the ghosts of past abuse, which had impacted her physically as well as mentally.

‘I think I’ve aged way before my time,’ Amanda said at the start of the show.

‘I thought it was normal for someone to abuse me. It took me longer to get over that mindset of “I don’t deserve this” and I’ve striven to get away from that.’

Amanda rebuilt her life with her partner John, but two years ago, illness struck and knocked her confidence back down.

‘Because I look the way I look, it makes those insecurities come back

John said he was ‘worried’ for Amanda, and wanted to ‘support her’ and ‘make her see that she is a beautiful person’.

At the start of the makeover, people thought Amanda looked 64, eight years older than her actual age.

‘Two years ago, I was vibrant, I could walk into a place with my head held high, and feel proud of who I am,’ she told Cherry.

‘Amanda is so ready to step into a new phase of her life and let go of the past,’ Cherry said.

Amanda’s first stop was at the practice of cosmetic dentist Dr Unchenna Okoye, who fitted her with new dentures.

‘When I was 11, my life totally changed from a happy schoolgirl loving life to dramatic horrific things happening. I have suffered a lot of abuse, some psychical,’ she explained, prior to the appointment.

‘When I was 17, my bottom teeth got knocked out, I was ashamed to have dentures at 17-years-old.

‘And that has stayed with me all my life,’ she said.

‘Every time I see the damage to my teeth, I get reminded of past traumas.’

Amanda was moved to tears by the temporary dentures Dr Uchenna fitted her with. She was to be fitted with a more permanent pair before the big reveal.

But there was another crutch holding Amanda back. She admitted she had been smoking for more than 40 years, having started at a very young age.

Dr Tapan Patel agreed that her smoking had accelerated Amanda’s ageing and said she had ‘far more wrinkles to what we’d expect if she hadn’t smoked.

He treated her skin with dermafillers and Botox in order to replump her loose skin.

Amanda was so impressed with the result, she wowed to quit smoking on the spot, to Cherry’s delight.

Amanda went on to meet with Gemma, admitting there was nothing she liked about her body.

Gemma introduced her to sharp tailored suit to bring some structure to her silhouette, which helped her stand a couple inches taller.

When time came to see her reveal, Amanda was left speechless.

‘Shut the front door. Oh my god,’ she said, tearing up.

John Vial had given her tired blonde hair a new lease of life with a honey colour and a wavy blow-dry.

Cream makeup had been applied to highlight her fabulous bone structure.

Gemma had picked a immaculate pantsuits with a white tank top and a gold chain underneath, which showed off her tan.

‘You look like you own a yacht,’ Cherry said.

‘This is the woman that’s staying,’ Amanda said, looking at herself in the mirror.

‘I honestly can’t remember the last time I stood tall and proud,’ she said.

‘My future is going to be so much brighter,’ Amanda said.

Viewers loved the episode and some saluted Cherry’s empathy towards Amanda and Sam.

‘I’m going to bed happier because the two ladies on were living their best lives. I love soaking up other peoples joy because I feel like I borrow some in their process. I’m a secret joy thief,’ one said.

‘I feel like TV shows are a lot more feel good now. Considering how bleak this last year has been, it’s nice watching shows full of warmth #10yearsyounger,’ said another.

‘Well both women look beautiful and the confidence is radiating from them both. Good for them,’ one said.

‘Love Cheery Healey on this new format of #10YearsYounger! Perfect host, funny, empathetic & genuinely rooting for the ladies on the show,’ one wrote.

10 Years Younger in 10 Days airs on Thursdays at 9pm on Channel 5 and is available on My5.