These maze markings are driving motorists round the twist: Residents slam scheme to encourage walking and cycling and predict ‘confusing’ layouts will cause an accident

By Liz Hull for the Daily Mail

It was designed to get road users on their bikes – but this bizarre junction has simply made drivers’ heads spin.

The maze-like markings were added by a council as part of a £3.2million scheme to encourage walking and cycling.

The idea is for drivers and cyclists to slow down or stop before reaching the ‘no-priority’ junction. 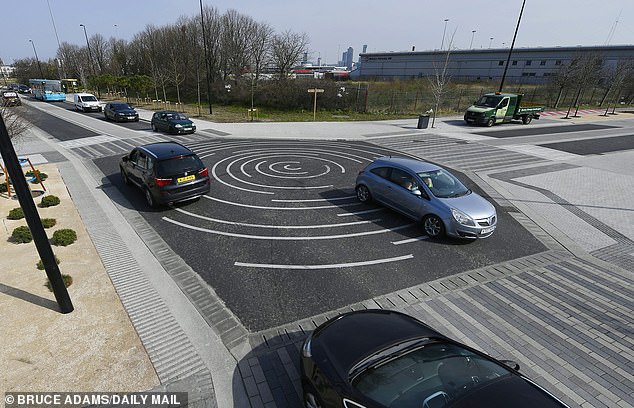 This junction in Birkenhead, Merseyside, has left road users confused over who has right of way with some treating it like a roundabout while others ignore it and drive straight over it

They must then work out how to cross – as there is no right of way.

But motorists in Birkenhead, Merseyside, say it is an accident waiting to happen, with some using the system as a roundabout and others simply crossing it.

One posted online: ‘I had a near-miss. I went around and someone behind went straight across – so confusing.’

Wirral Council was unable to explain the thinking behind the spiral markings yesterday.

A spokesman said they ‘operate on the basis of all users reducing speed or stopping in order to negotiate the junction safely’.

Pavements have been widened, new walking and cycling routes installed and 130 trees planted as part of the scheme, which aims to give the area a greener, ‘European square’ feel. 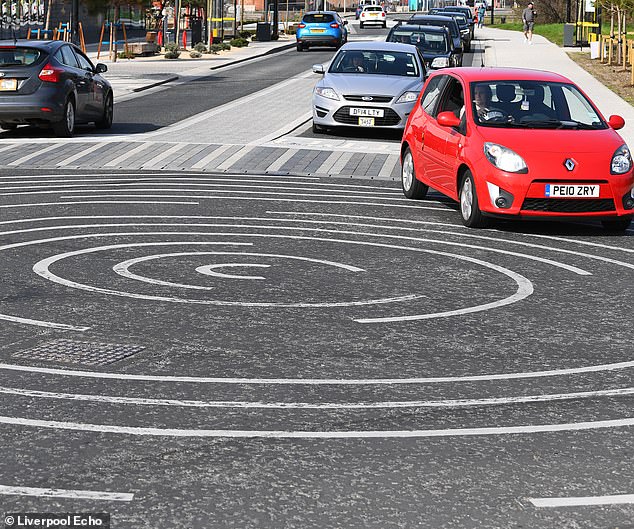 The carriageway has also been narrowed to single lanes both ways, in a bid to slow down cars, HGVs and other vehicles which use the route.

A spokesman for the Wirral Waters project, which is being carried out by Wirral Council in conjunction with developer Peel, said plans were also afoot to reduce the speed limit along the 30mph road.

‘The scheme has been designed to slow all vehicles right down, to be a more open shared space,’ he said.

‘At the moment, partly because of lockdown and partly because the street scape is a little ahead of other regeneration in the area, it looks a bit funny because people are going through at quite a speed.

‘The idea is that it will eventually work like a European square type space, rather than somewhere people rattle through at 30mph.’