The death toll in Myanmar’s military crackdown has passed 500 – prompting rebel groups to threaten they will shoot back at the junta if the bloodshed does not come to a stop, raising fears of a civil war.

Daily rallies since the military seized power on February 1 have been met with tear gas, rubber bullets and live rounds in a bloody crackdown by the generals.

The Assistance Association for Political Prisoners (AAPP) said it had confirmed a total of 510 civilian deaths but warned the true toll was probably significantly higher.

Three of the country’s armed insurgent groups – the Ta’ang National Liberation Army, the Myanmar Nationalities Democratic Alliance Army and the Arakan Army (AA) – have warned they will fight alongside protesters if the violence is not reined in. 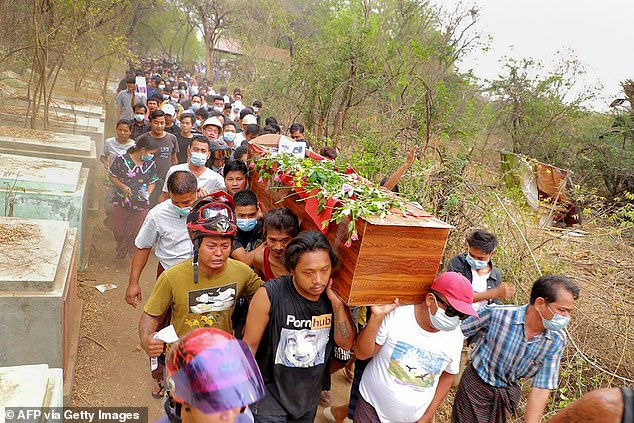 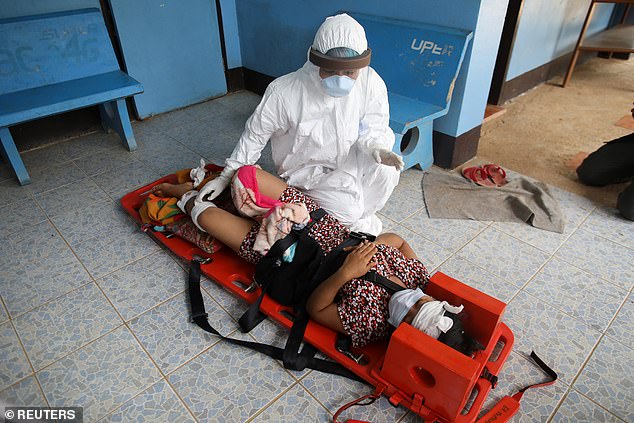 World powers have ramped up their condemnation of the campaign against protesters, who are demanding the restoration of the elected government and the release of civilian leader Aung San Suu Kyi.

The US suspended a trade pact with Myanmar and UN chief Antonio Guterres called for a united front to pressure the junta after more than 100 deaths in one weekend.

Adding to that campaign, the trio of ethnic rebel groups issued a joint statement on Tuesday threatening to weigh in with more violence.

‘If they do not stop, and continue to kill the people, we will cooperate with the protesters and fight back,’ the statement said.

Debbie Stothard at the International Federation for Human Rights (FIDH) warned that the situation could degenerate towards civil war if such groups take up arms.

The military has sought to cut deals with some armed groups and earlier this month took the AA off the list of terrorist organisations.

But over the weekend it launched airstrikes in eastern Karen state – the first such strikes in 20 years – targeting the Fifth Brigade of the Karen National Union (KNU) after the group seized a military base. 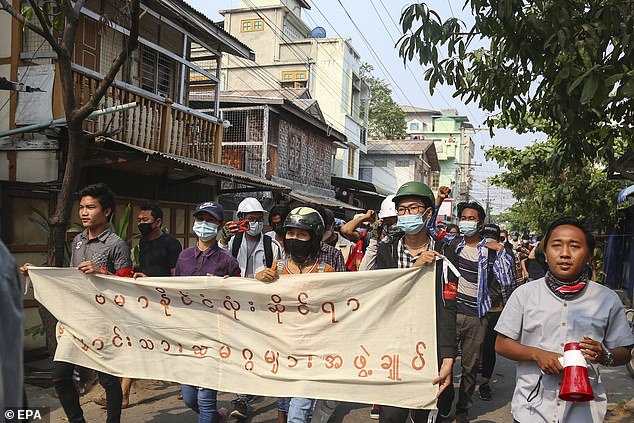 An estimated 3,000 people have fled through the jungle to seek safety across the border in Thailand, according to local groups.

Hsa Moo, a Karen human rights activist, said Thai authorities had pushed the refugees back and accused them of blocking UN refugee officials from the area.

‘The Thai authorities will continue to look after those on the Thai side while assessing the evolving situation and the needs on the ground,’ he said.

Thai police said they had intercepted 10 parcels containing 112 grenades and 6,000 rounds of ammunition in northern Chiang Rai province that had been destined for Myanmar’s notorious border town Tachileik. 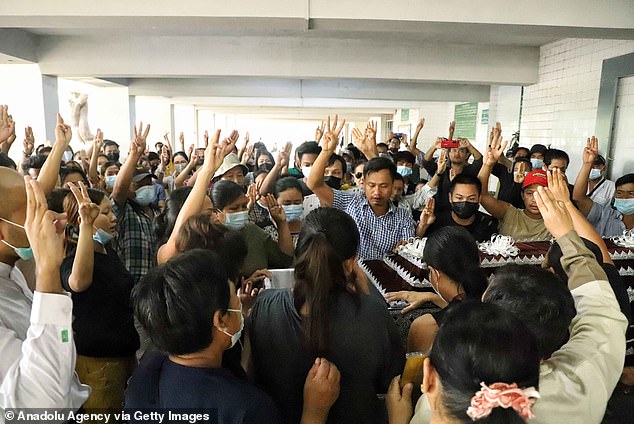 ‘It is absolutely unacceptable to see violence against people at such high levels, so many people killed,’ Guterres told a news conference.

‘We need more unity… (and) more commitment from the international community to put pressure in order to make sure that the situation is reversed,’ he said.

The Biden administration announced on Monday that the 2013 Trade and Investment Framework Agreement, which laid out ways to boost business but was not a fully-fledged deal, would remain suspended until democracy is restored.

The UN Security Council will meet on Wednesday to discuss the situation, diplomatic sources said, after Britain called for emergency talks.

France condemned the violence as ‘blind and deadly’ and China added its voice to a chorus of international concern on Monday, calling for restraint from all sides.

The Kremlin said it was ‘very concerned’ by growing civilian casualties, despite acknowledging it was building ties with the military authorities.

The US, Britain and the EU have all imposed sanctions in response to the coup and crackdown, but so far the pressure has not persuaded the generals to ease off.