NASA has shared footage of an ‘incredibly rare’ brown dwarf that could be up to 13 billion years old, named ‘The Accident’ after being discovered by chance.

A brown dwarf is a mysterious object that sits somewhere between a gas giant planet and a small star, but without the size to fuse hydrogen like a star would.

There might be more of these unusual ‘stars’ lurking in our galaxy than previously thought, according to a study by astronomers at Caltech in Pasadena, California.

It is faint in some wavelengths of light, bright in others, and hurtling around the Milky Way at half a million miles per hour – faster than any other local brown dwarf.

The unusual light make-up and speed helped the team determine it is between 10 and 13 billion years old – double the average age of other known brown dwarfs and dating to when the Milky Way was very young and had a different chemical makeup.

This suggests they have been around in the Milky Way since the earliest days and meaning there could be more than first thought, with a hidden population of up to 100 billion brown dwarfs floating in interstellar space. 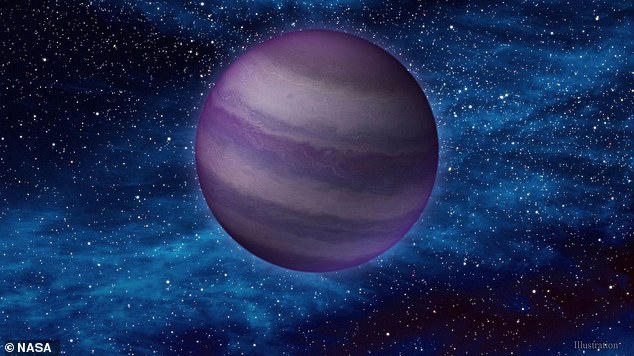 NASA has shared footage of an ‘incredibly rare’ brown dwarf that could be up to 13 billion years old, named ‘The Accident’ after being discovered by chance. Pictured is an artist’s impression

WISE 1534–1043, also known as ‘The Accident’ was discovered accidentally in data gathered by NEOWISE.

Citizen scientist Dan Caselden was using a program he built to look for brown dwarf-like objects in the infrared images captured by the NASA space telescope.

He was looking at an object that met the description when he spotted ‘The Accident’ in the background.

Later follow up studies confirmed it was a brown dwarf about 50 light years from the Earth – but unusual.

It gave off hot signals in some light wavelengths and cold in others.

The ‘star’ was also travelling at about half a million miles per hour – much faster than any previously discovered local brown dwarf.

It was confirmed to be a Class Y brown dwarf, the coolest type.

This, with the speed that suggests it has had a long time to build momentum through gravitational encounters, means it is very old.

It has a surface temperature of about 450 Kelvin, or about 350 degrees Fahrenheit.

The brown dwarf was accidentally discovered via the Wide-field Infrared Survey Explorer (NEOWISE) by citizen scientist Dan Caselden, who was using an online program he built to find these objects in data gathered by the telescope.

They are between 13 and 80 times more massive than Jupiter but they’re not large enough to fuse elements like hydrogen into helium the way a star does.

While brown dwarfs sometimes defy characterisation, astronomers have a good grasp on their general characteristics, or they did until ‘The Accident’.

As brown dwarfs age, they cool off, and their brightness in different wavelengths of light changes, similar to the way heated metals go from white to red as they cool.

The Accident confused scientists because it was faint in some key wavelengths, suggesting it was very cold, but bright in others, indicating a higher temperature.

‘This object defied all our expectations,’ said Davy Kirkpatrick, an astrophysicist at IPAC at Caltech in Pasadena, California.

He said the 10-13 billion year age of The Accident means it would have formed when our galaxy was much younger and had a different chemical makeup.

‘If that’s the case, there are likely many more of these ancient brown dwarfs lurking in our galactic neighbourhood,’ the researcher explained.

To find out why it had contradictory properties – some suggesting it was cold, others warmer – astronomers turned to the Keck Observatory in Hawaii.

They used the telescope to observe the object in a wider range of wavelengths of light, particularly infrared, but it was so faint it couldn’t be detected at all.

This confirmed the suggestion it was very cold, meaning that it was also likely old.

They next set out to determine if the dimness resulted from The Accident being farther than expected from Earth. But that wasn’t the case, according to precise distance measurements by NASA’s Hubble and Spitzer Space Telescopes.

Having determined the object’s distance – about 50 light-years from Earth – the team realised that it is moving fast – about half a million miles per hour.

That’s much faster than all other brown dwarfs known to be at this distance from Earth, which means it has probably been careening around the galaxy for a long time, encountering massive objects that accelerate it with their gravity.

Known it was extremely old meant the unusual wavelength properties made more sense, according to the NASA-backed team. 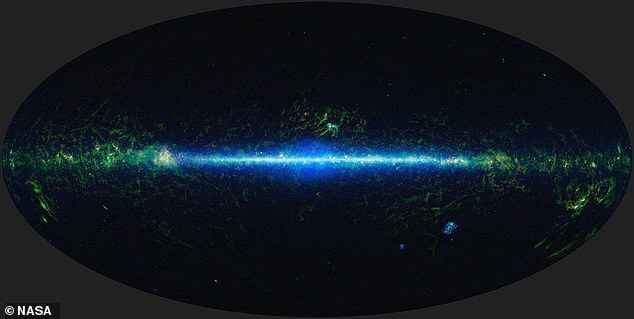 This mosaic shows the entire sky imaged by the Wide-field Infrared Survey Explorer (WISE). Within the data that made up this image was evidence of ‘The Accident’ brown dwarf 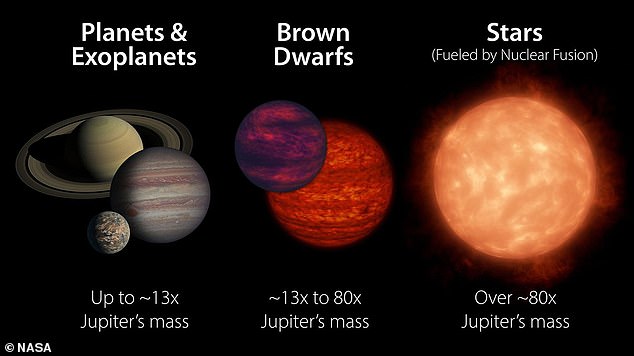 A brown dwarf is a mysterious object that sits somewhere between a gas giant planet and a small star, but without the size to fuse hydrogen like a star would

It was originally active from December 2009 to February 2011 and later extended with a new name.

In September 2013 the spacecraft was assigned a new mission and renamed as NEOWISE and is still operating.

It was re-activated to help search for comets and asteroids near Earth.

As of March 2021, the mission has made 1,130,000 confirmed infrared observations of approximately 39,100 objects throughout the solar system since its restart in 2013.

Mission data is shared freely by the IPAC/Caltech-led archive and the data has contributed to over 1,600 peer-reviewed studies.

“NEOWISE provides a unique and critical capability in our global mission of planetary defence, by allowing us to rapidly measure the infrared emission and more accurately estimate the size of hazardous asteroids as they are discovered,” said Lindley Johnson, NASA’s Planetary Defense Officer

Among its many accomplishments after its reactivation, NEOWISE also discovered Comet NEOWISE, which was named after the mission and dazzled observers worldwide in 2020.

Its data has also helped astronomers in the search for faint brown dwarf stars.

NEOWISE’s replacement, the next-generation NEO Surveyor, is currently scheduled to launch in 2026.

When the Milky Way formed about 13.6 billion years ago, it was composed almost entirely of hydrogen and helium.

Other elements, like carbon, formed inside stars; when the most massive stars exploded as supernovae, they scattered the elements throughout the galaxy.

Methane, composed of hydrogen and carbon, is common in most brown dwarfs that have a temperature similar to The Accident.

Like all molecules, methane absorbs specific wavelengths of light, so a methane-rich brown dwarf would be dim in those wavelengths.

The Accident, by contrast, is bright in those wavelengths, which could indicate low levels of methane.

Thus, the light profile of The Accident could match that of a very old brown dwarf that formed when the galaxy was still carbon poor – as very little carbon at formation means very little methane in its atmosphere today.

‘It’s not a surprise to find a brown dwarf this old, but it is a surprise to find one in our backyard,’ said Federico Marocco, an astrophysicist at IPAC at Caltech who led the new observations using the Keck and Hubble telescopes.

‘We expected that brown dwarfs this old exist, but we also expected them to be incredibly rare. The chance of finding one so close to the solar system could be a lucky coincidence, or it tells us that they’re more common than we thought.’

The program developed by Caselden, that led to the discovery of The Accident, attempted to remove the stationary infrared objects, like distant stars, from the data, and highlight moving objects similar to known brown dwarfs.

He was looking at one such brown dwarf candidate when he spotted The Accident, which was a much fainter object moving quickly across the screen.

It hadn’t been highlighted because it did not match the program’s profile of a brown dwarf. Caselden caught it by accident.

‘This discovery is telling us that there’s more variety in brown dwarf compositions than we’ve seen so far,’ said Kirkpatrick. ‘There are likely more weird ones out there, and we need to think about how to look for them.’

The findings have been published in the Astrophysical Journal Letters.

BROWN DWARF: AT LEAST 13 TIMES LARGER THAN JUPITER BUT NOT LARGE ENOUGH TO START FUSION

Brown dwarfs are thought to be the missing link between planets and stars, with masses between 13 and 80 times that of Jupiter.

But their centres are not hot or dense enough to generate energy through nuclear fusion, from hydrogen into helium, the way main sequence stars do. 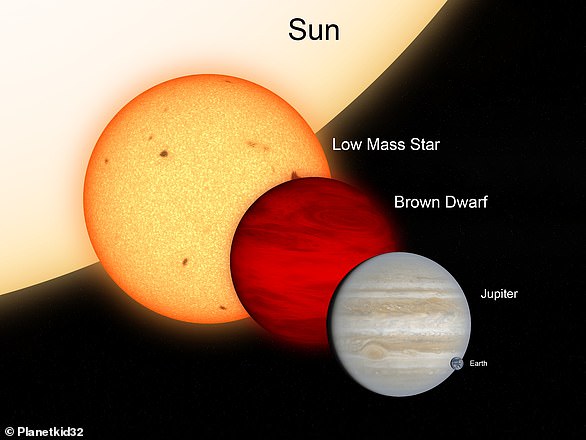 While they can’t sustain traditional fusion, unlike a giant plant, they are able to fuse a heavy isotope of hydrogen, called deuterium, into helium.

It is thought that a galaxy the size of the Milky Way could have as many as 100 billion brown dwarf stars, with many wandering in interstellar space.

Self-luminous objects, like stars, are given a letter category based on their surface temperature – with 0 the brightest and hottest, going through B, A, F, G, K and on to, M the coolest of Main Sequence Stars.

Astronomers also added L, T and Y for Red Dwarf and Brown Dwarf type stars, as well as a range of other classifications for unusual star types.

Over the course of their life, a brown dwarf star will go through M, L, T and Y as they don’t go through stable fusion, so cool down over time.

To the naked eye they would appear a variety of different colours depending on the stage they are at in their evolution.

The warmest could appear orange or red and the coolest magenta, and could have layers like Jupiter or be uniform in appearance.