Newly uncovered, intimate photos show the Queen sitting for a portrait with a man on the run from Interpol for kidnapping his son, failing to pay child support and accused of swindling his patrons.

Photo slides obtained by DailyMailTV show Queen Elizabeth in a formal gown, sat in her throne while the fugitive artist Curtis Hooper took pictures of her from every angle to use as a reference for painting his royal portrait.

The monarch even left him with a lipstick kiss on a handkerchief so that he could get her coloring correct.

It is unclear from the intimate setting of the photos whether the Queen was left alone with Hooper – who had a warrant out for his arrest at the time, and was a prolific swindler and philanderer, DailyMailTV can reveal.

But a friend says Hooper, who died last year, told him he even dined privately with the royals after presenting the finished portrait, and was asked to do a second piece around 2018. 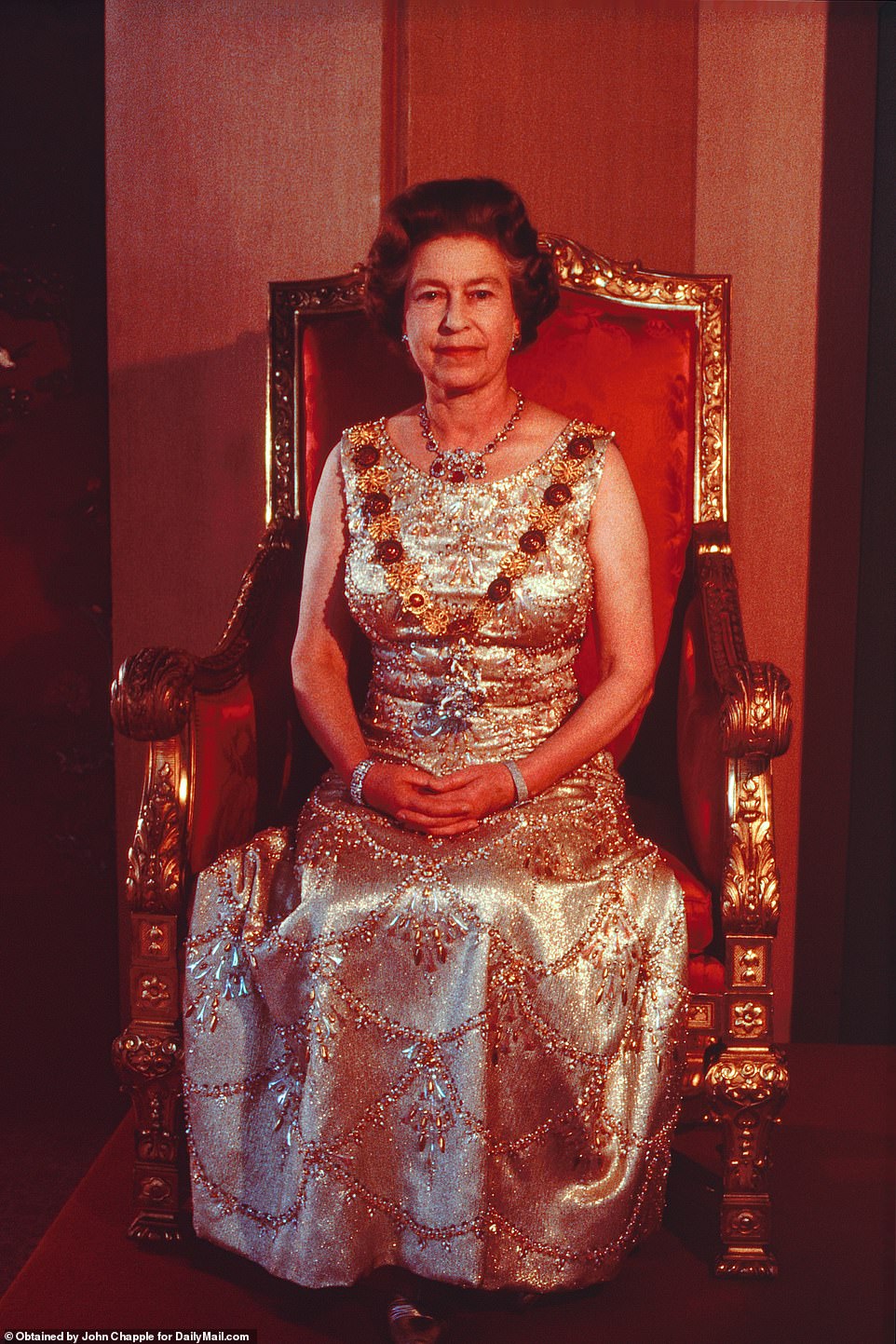 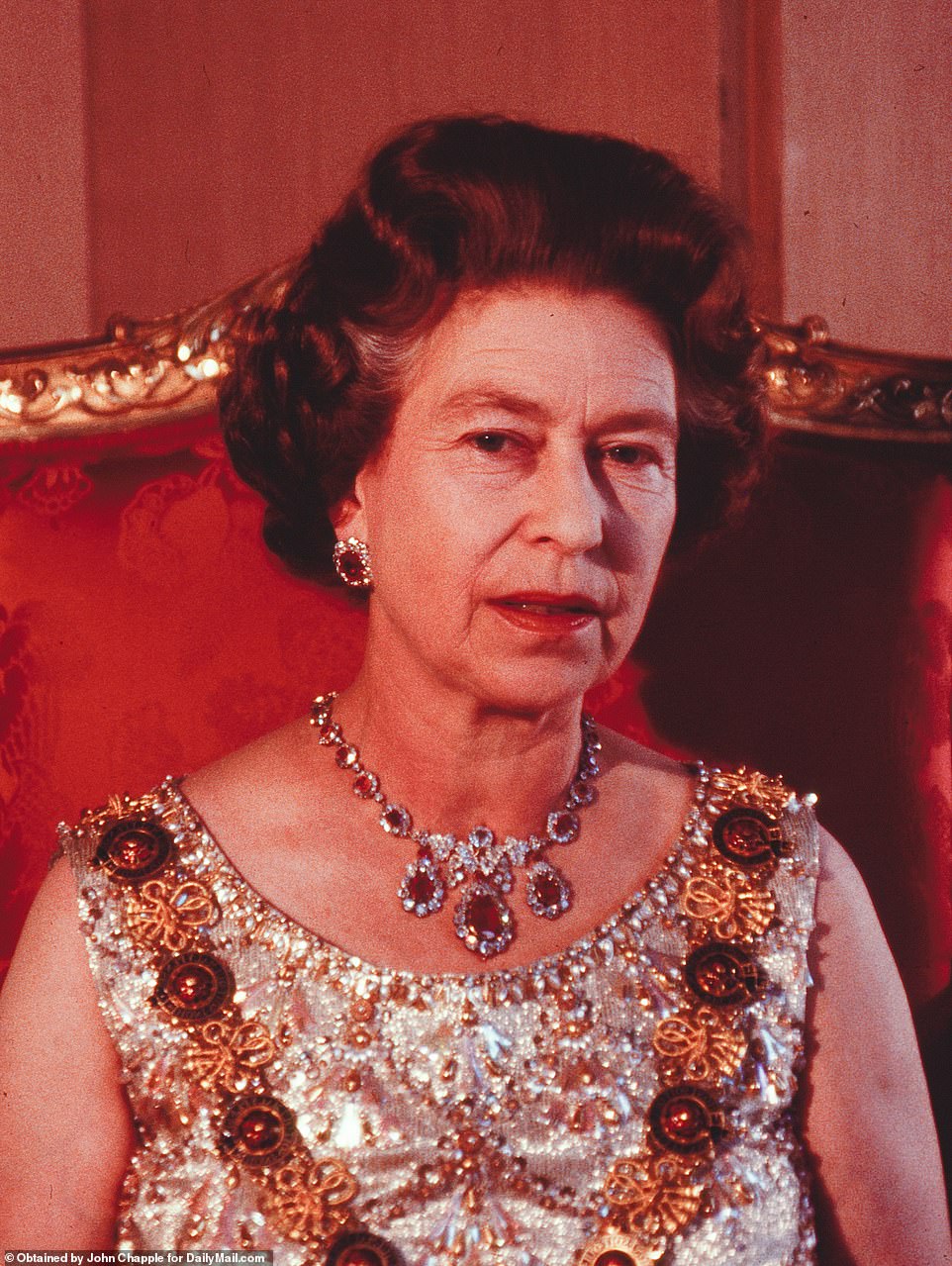 The never-before-seen photos, which were taken as a reference for the artist’s painting, were discovered this month in a trove of Hooper’s photographs, artwork, documents, and newspaper clippings that had been stashed in a storage unit in Sebring, Florida 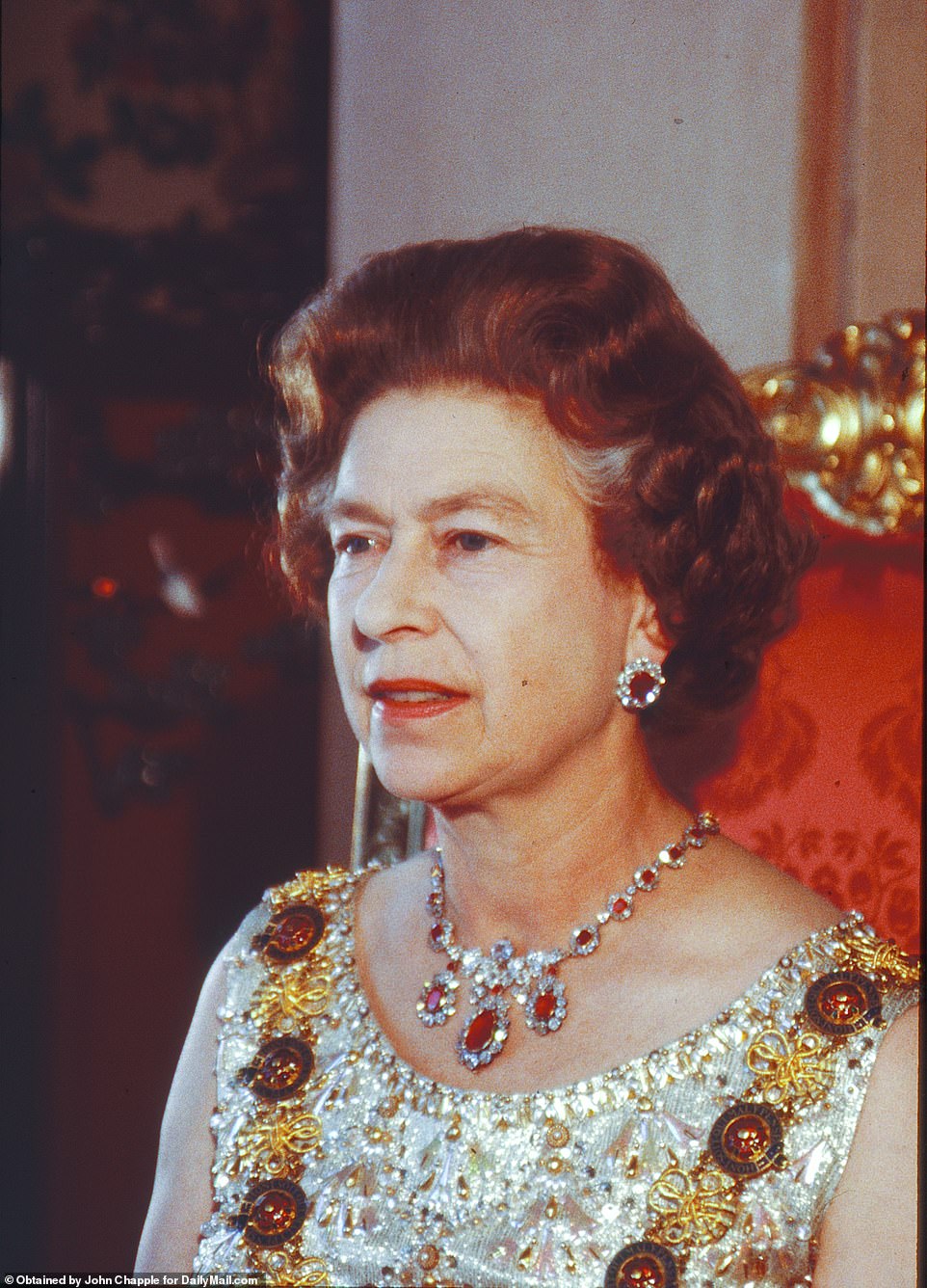 The Queen’s private secretary, Robert Fellowes, hired Hooper, who died last March at the age of 75, to paint the monarch at Buckingham Palace for a portrait he had proposed for City Hall in Hamilton, Bermuda 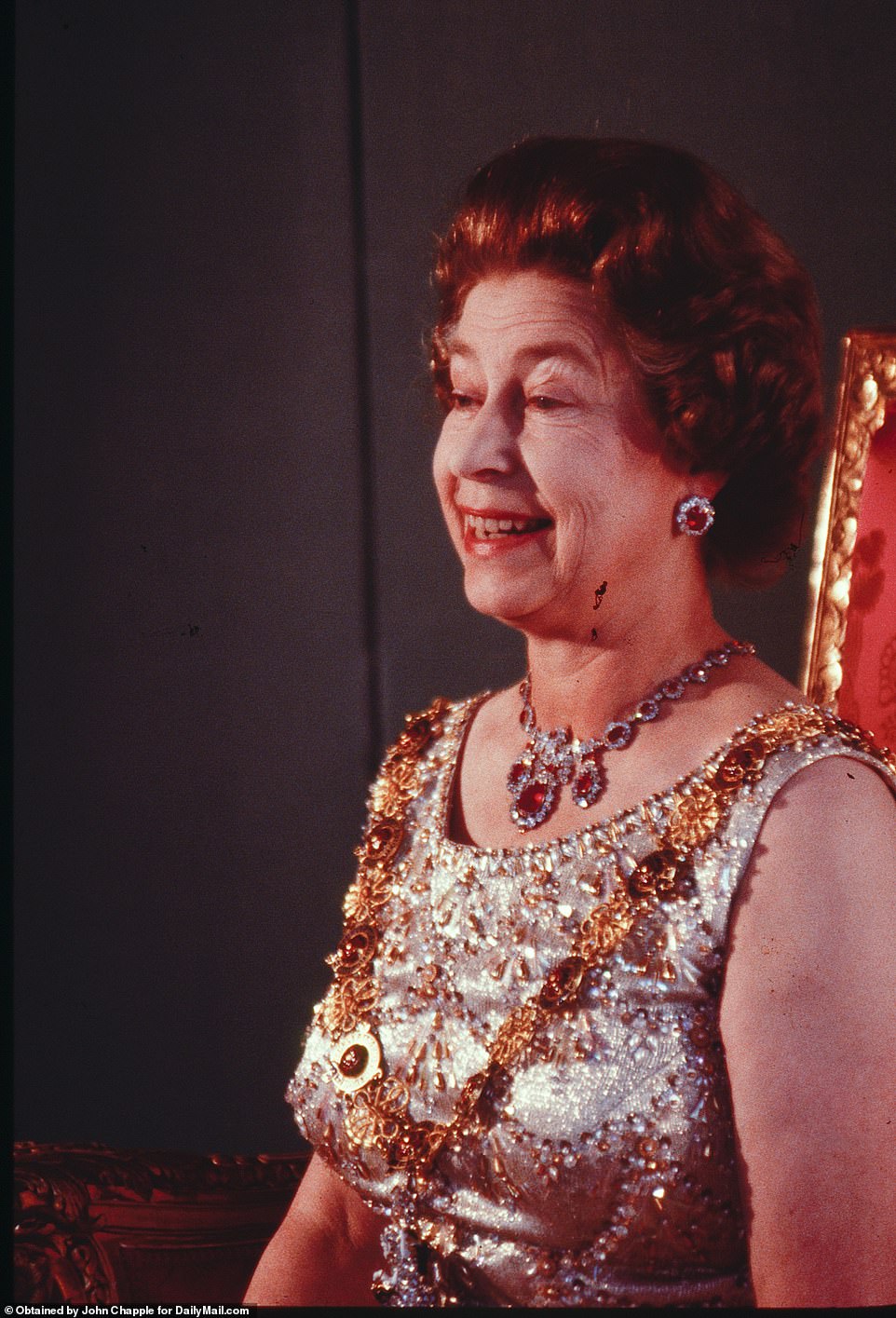 The photos offer an extraordinary glimpse of the Queen, then 59, in a relatively intimate occasion as she was photographed from nearly every angle, including her profile, her breasts, her hands, as well as her throne

The renowned stockbroker-turned-artist was given the rare privilege of painting the British monarch over two sittings in 1986, as well as Winston Churchill, Saudi King Faisal, Peter Sellers, Salvador Dali and even Christ himself, after he was allowed to study the Turin Shroud.

Years before his sitting with the Queen, Hooper kidnapped his son Jason from his Toronto, Canada, home in the 1970s.

He took the toddler and his mistress Teri on the run from law enforcement for more than two years, until Interpol managed to catch up with Teri and had her fly Jason home to Hooper’s distraught wife.

Though police recovered the child, the artist evaded capture and was still being pursued by Interpol for kidnap and failure to pay child support more than a decade later when he painted the monarch in Buckingham Palace – and was paid $260,000 for the job.

Speaking to DailyMailTV, Jason revealed his cheating father had a prolific string of affairs, even seducing a senior judge and swindling more than $50,000 from her husband, along with other victims of his scams.

The 50-year-old said his absentee father told friends he didn’t have children, and failed to show up to his daughter’s funeral.

Though Hooper’s collection has been assessed at millions of dollars, Jason’s mother Carol says she ‘never saw a dime’ of the money despite winning multiple court judgments against her ex-husband, who she said started cheating on her just three weeks into their marriage. 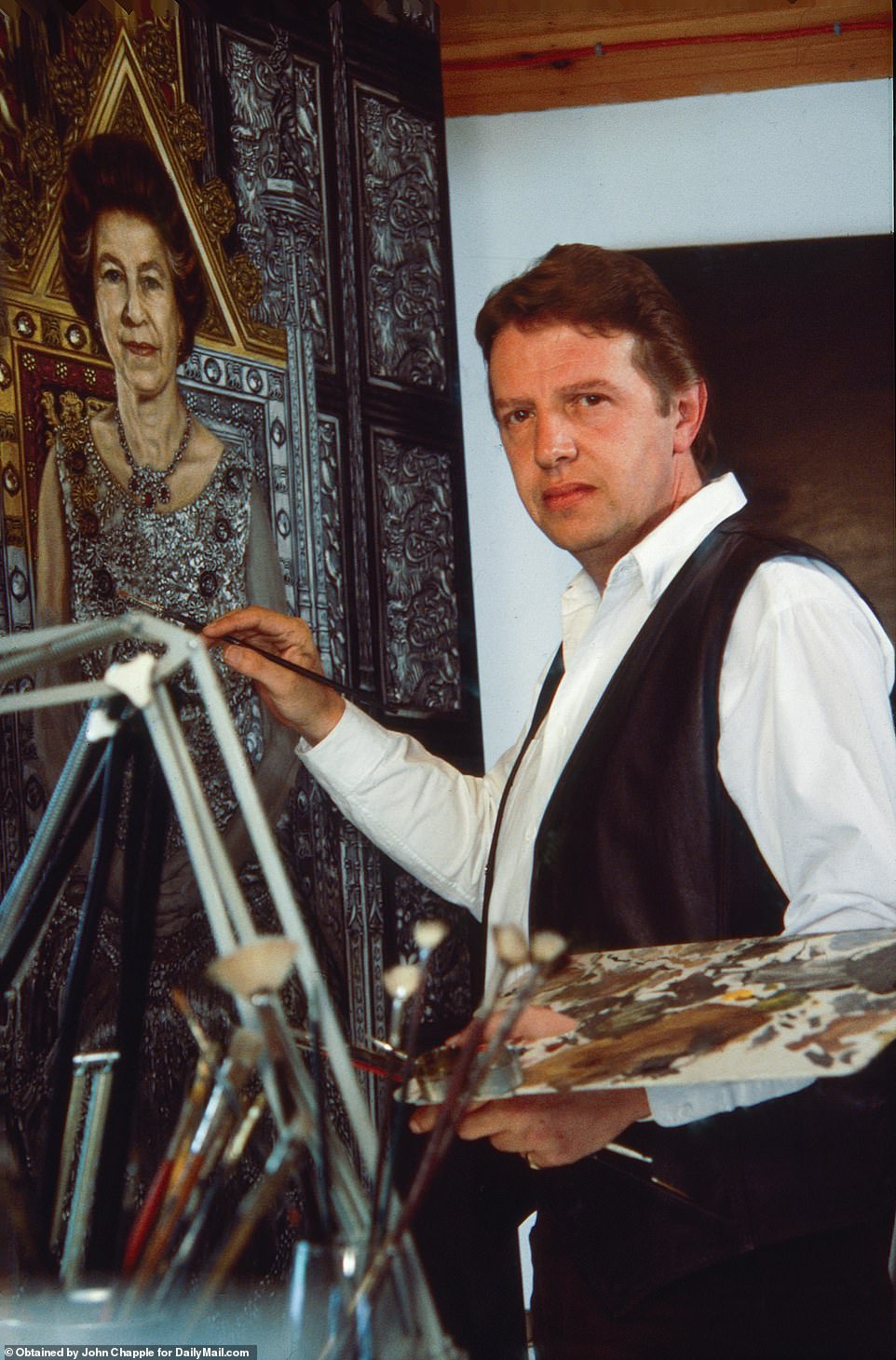 But the photos also tell an interesting, and rather dark, tale about the man who painted the British monarch. Hooper, who was known for his paintings of other dignitaries including Winston Churchill and Saudi King Faisal, was also known to Interpol authorities who had been seeking him 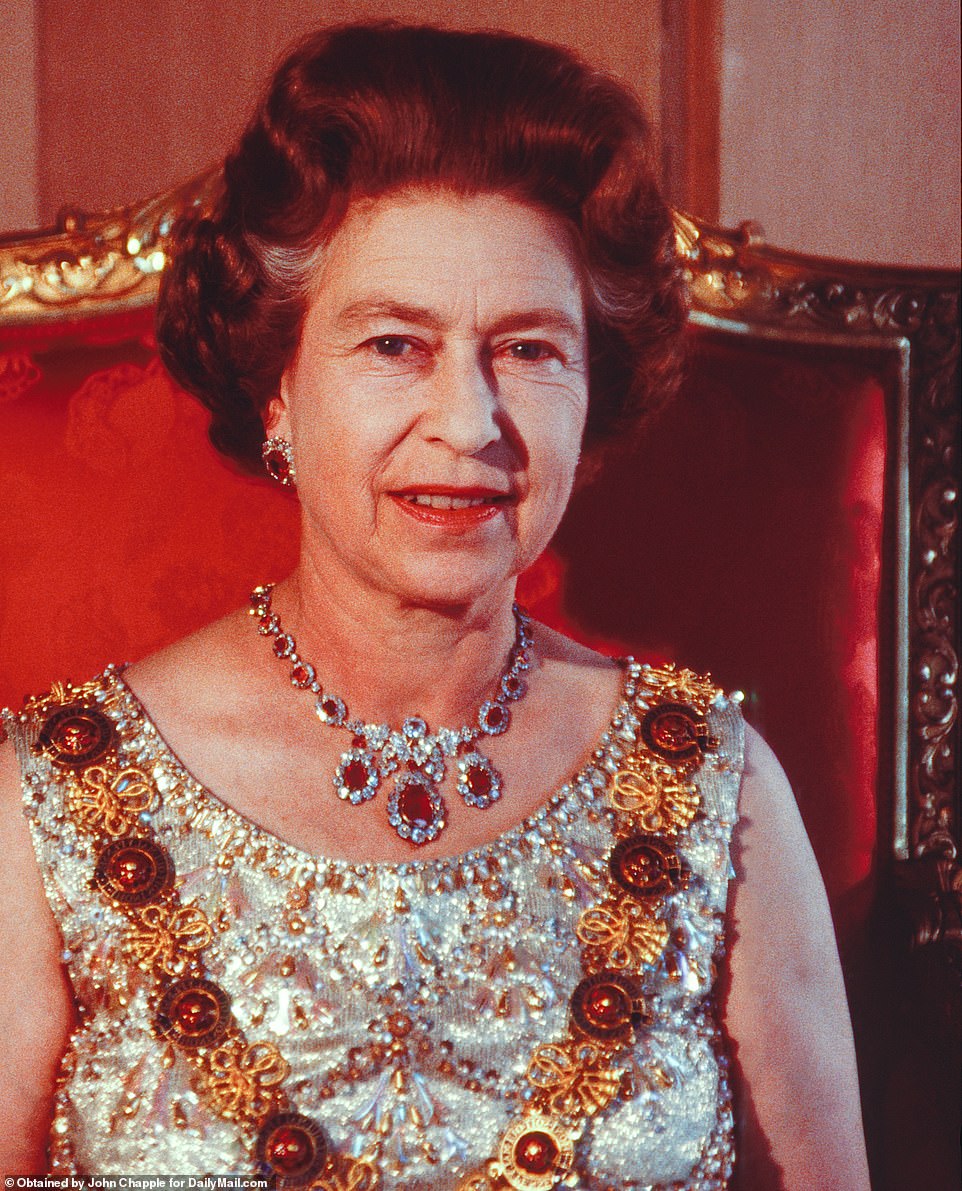 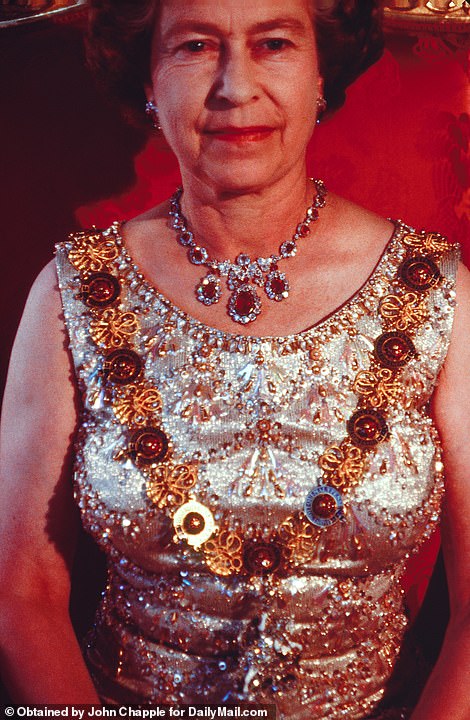 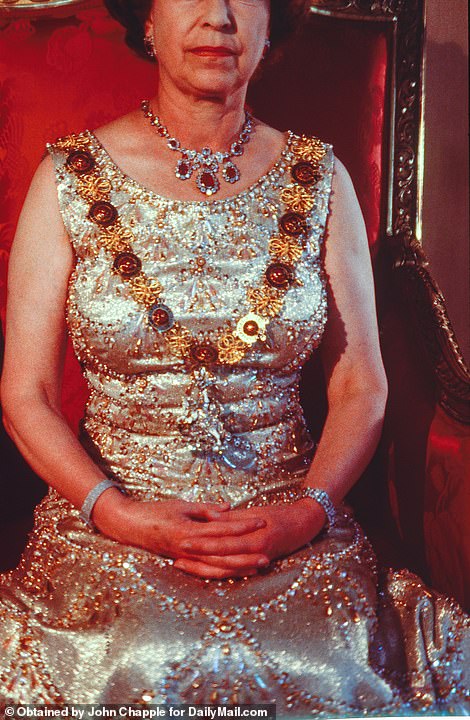 Hooper snapped several photos in hopes of capturing every ornate detail of his subject. But his estranged son, Jason Hooper, has questioned how his prolific swindler father, who was wanted for kidnapping at the time, was even granted such a privilege by the royals 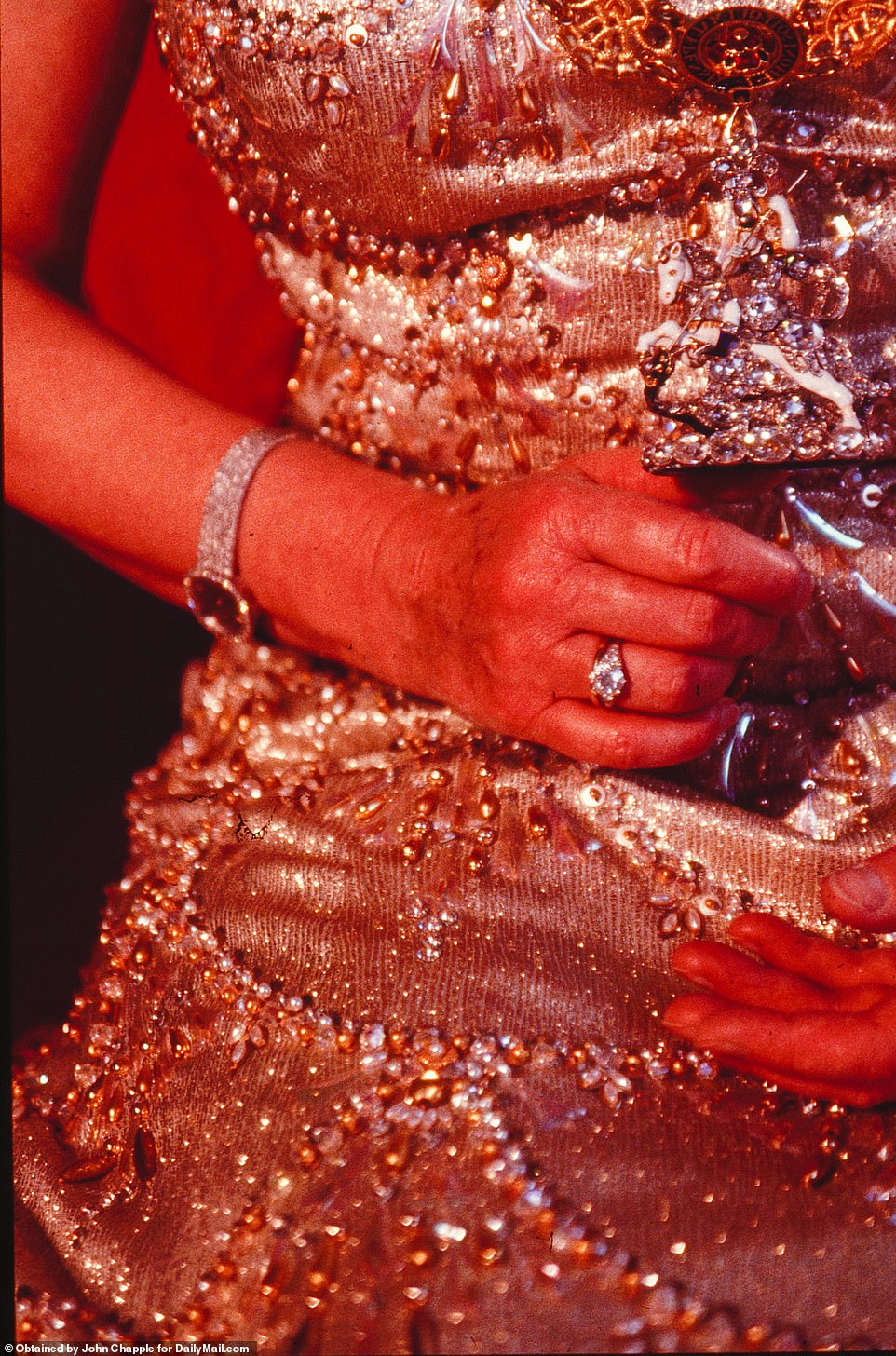 The renowned stockbroker-turned-artist got up close and personal with Elizabeth, capturing the intricate details of her dress as well as her jewels 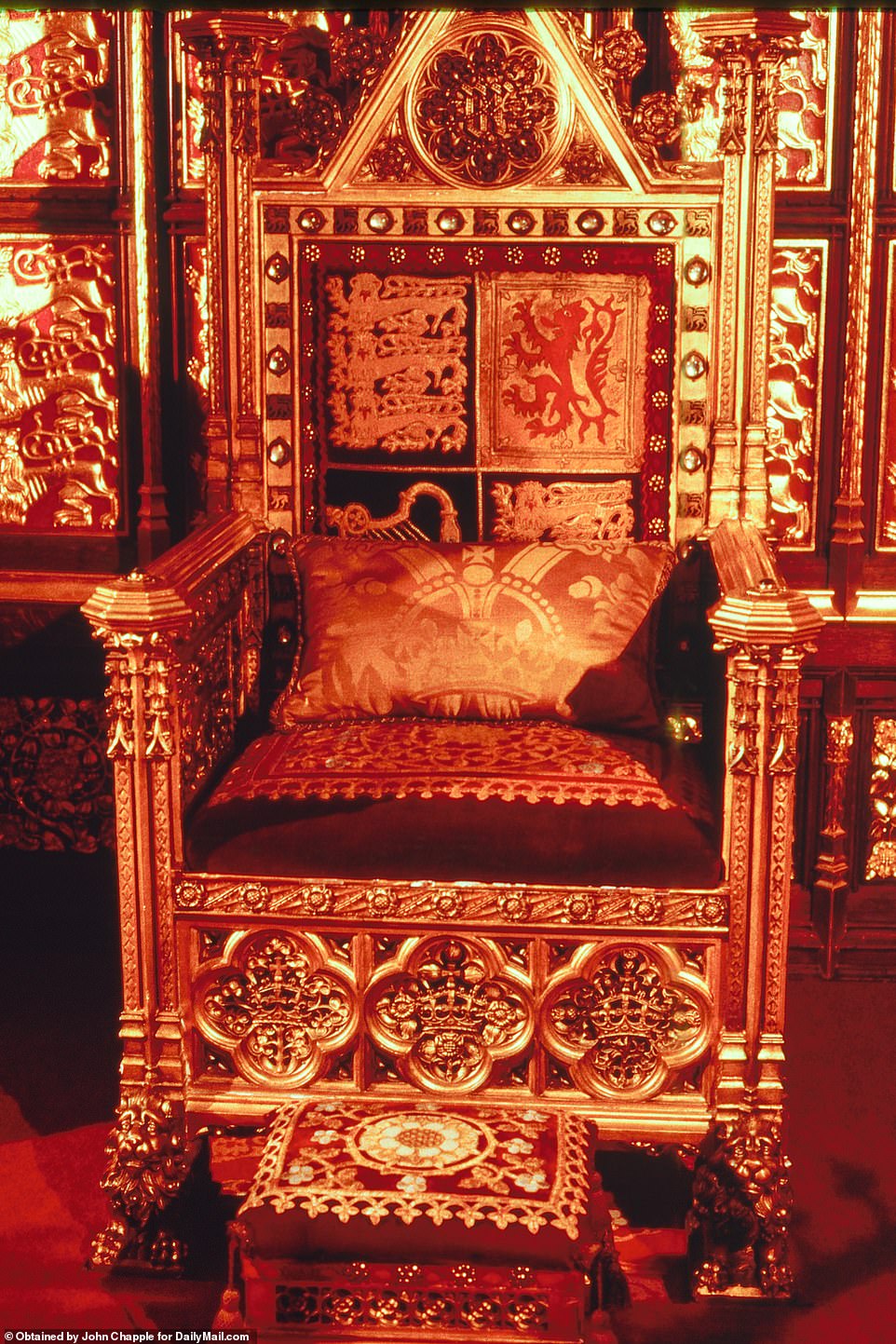 He also took reference pictures of her throne 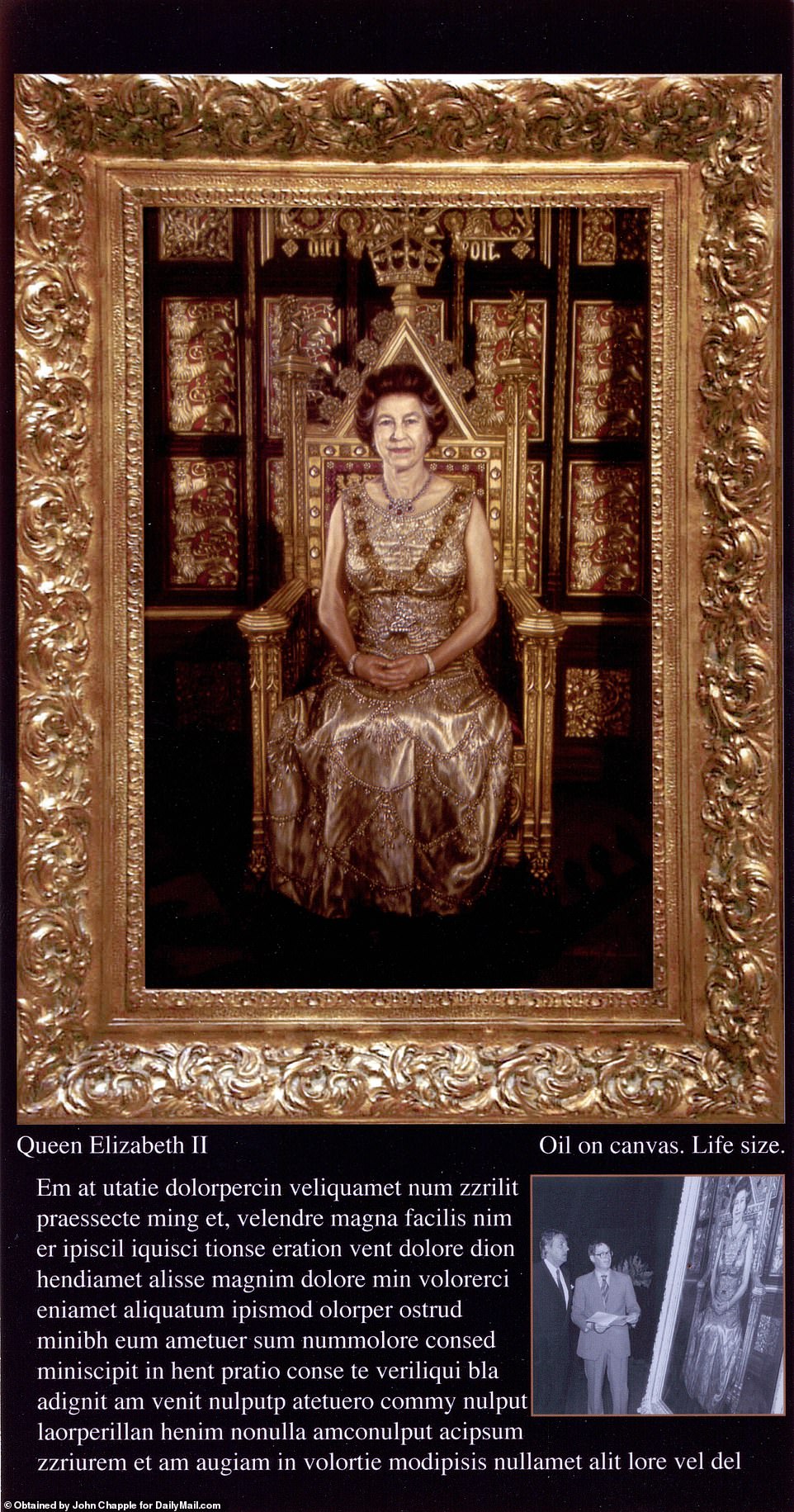 Hooper was ultimately paid $260,000 by the palace for his painting of the Queen. Friends say he even boasted of dining with the royal family privately after presenting the finished portrait

When Hooper died last March age 75, Jason – a former rock star who was once featured in Rolling Stone Magazine – began investigating his father’s checkered history himself, speaking to family, friends, colleagues, enemies and lovers, and finally, this month, uncovering a treasure trove in a Florida storage unit.

After his abduction, the last time Jason saw his father was a two-week visit when he was 10. So he was overwhelmed this month to stumble across a treasure trove of his photographs, paintings, documents and newspaper clippings recovered from the storage unit in Sebring, Florida.

Among the stash were his father’s photo slides of the Queen, pictures of Hooper with brush in hand painting the royal portrait, and a picture from a balcony overlooking Buckingham Palace’s courtyard where royals would wave to their subjects on special occasions.

‘It was an artist’s study, so he took a picture of the side of her face, of her breasts, of her hands, of the throne. Everything,’ Jason told DailyMailTV.

‘How did my father get into Buckingham Palace when he was wanted for kidnapping and child support? Wouldn’t they investigate that, who was sitting alone with the Queen in Buckingham Palace taking photos of her?’ 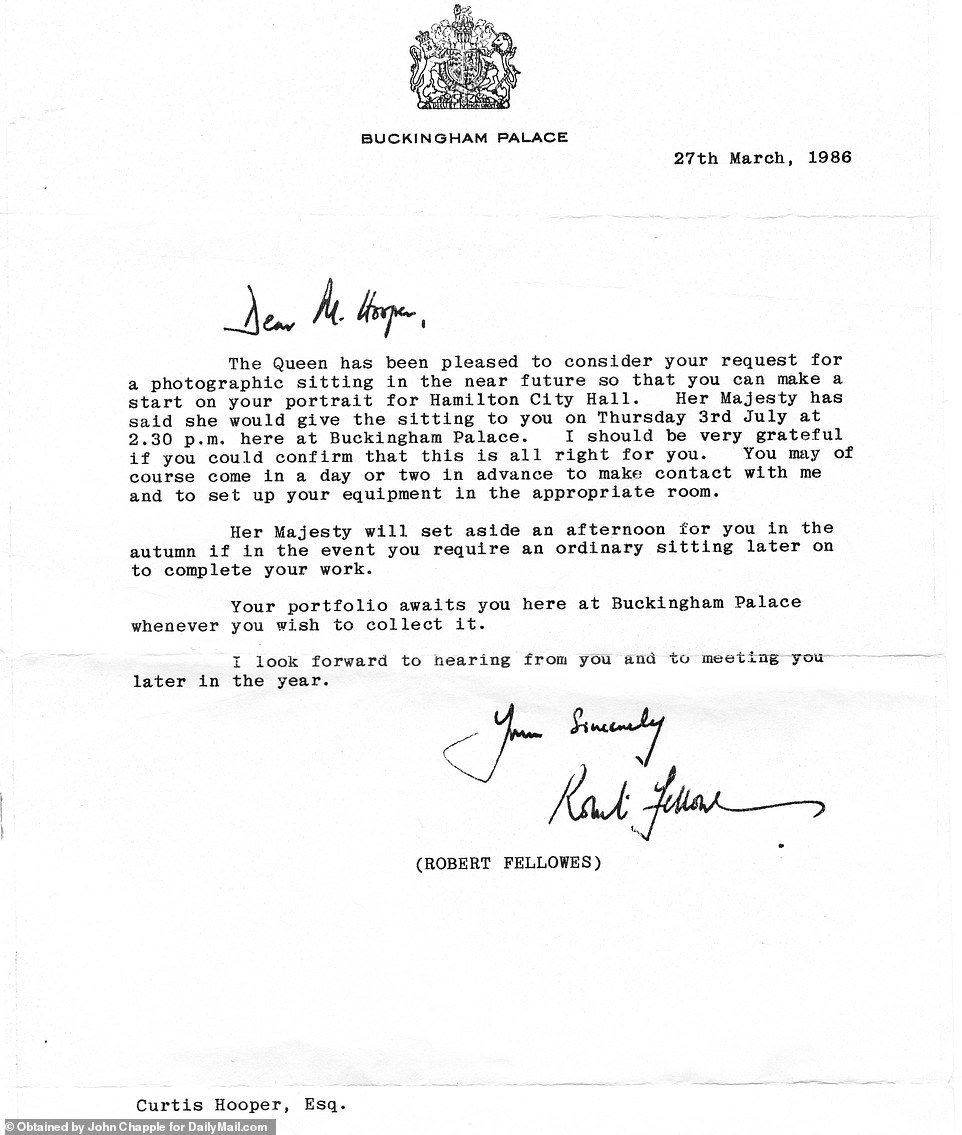 A letter from the Queen’s private secretary Robert Fellowes dated March 27, 1986 invited Hooper to his first sitting with the monarch 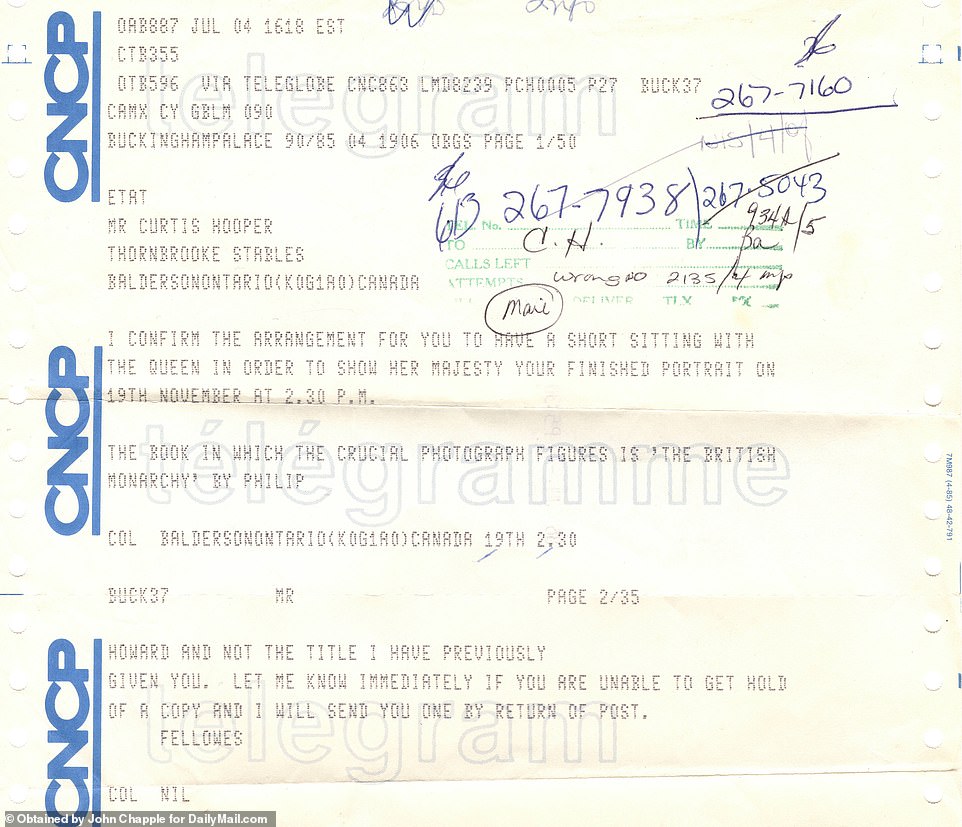 A telegram from Fellowes sent the next day arranged a second meeting between the artist and Elizabeth, giving him a strict deadline and a recommendation of a 1977 book on the royal family for inspiration or guidance 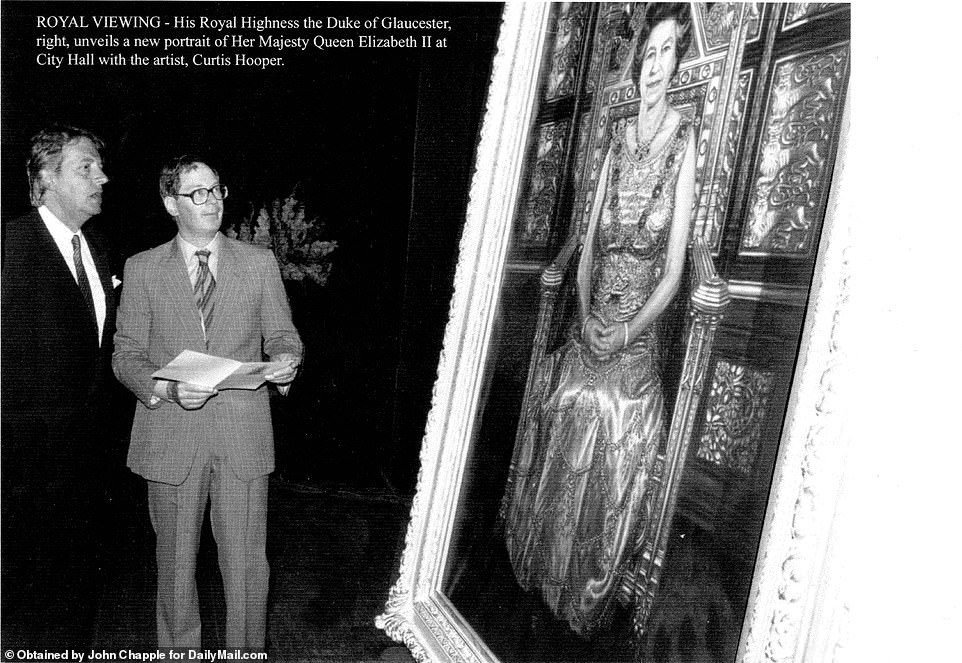 The 71 inch by 47 inch oil on canvas painting is set in a ‘heavy ornate carved and cast gilt’ frame in the City Hall foyer in Hamilton, Bermuda today 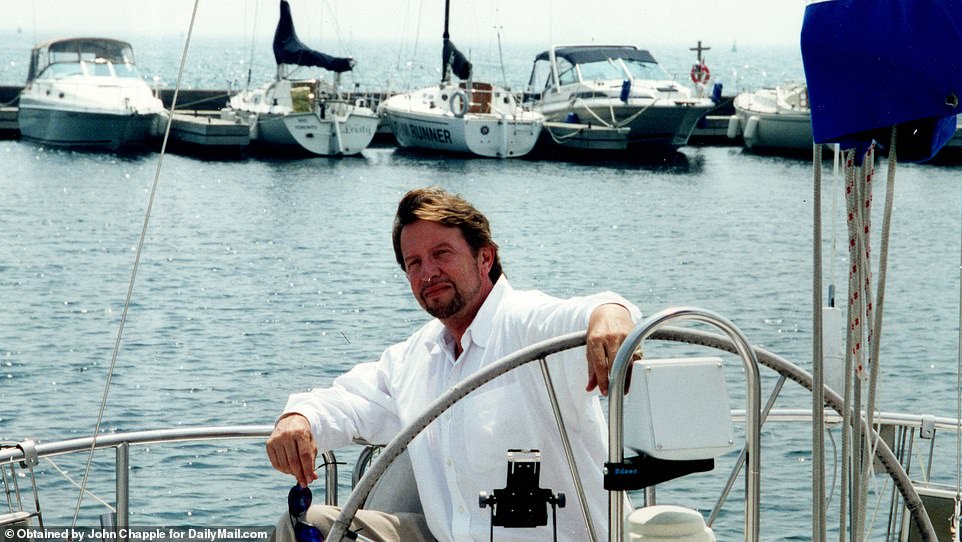 Hooper was a talented artist but a lousy father, according to Jason, who was kidnapped by his dad from his Toronto home as a child 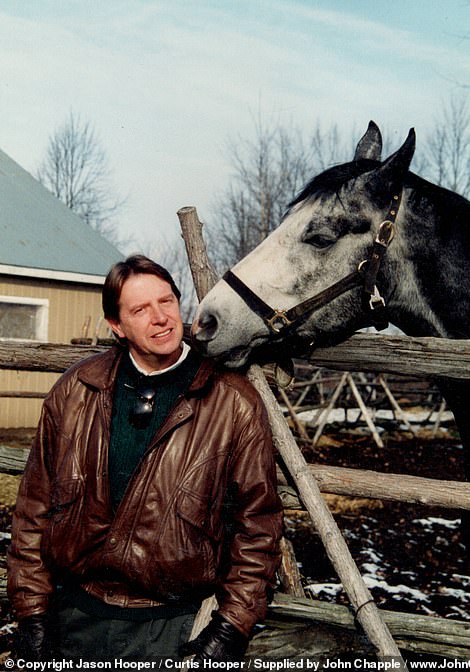 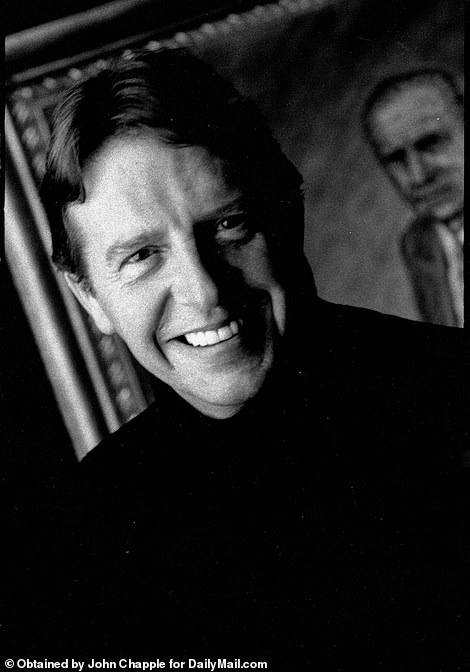 While Jason acknowledges his father was an ‘astonishingly talented artist’ who was ‘charming and charismatic with everybody,’ he says there was another side of him that ‘was not a good man at all’

Jason said he tried contacting British embassies, the palace, and even the Queen’s private secretary after he found the photos, but received no response.

‘My father was a remarkably and astonishingly talented artist. He was also charming and charismatic with everybody. But on the other side he was not a good man at all,’ he said.

‘I am disturbed about all of this,’ he added. ‘I really want to find out why they didn’t investigate my father.’ 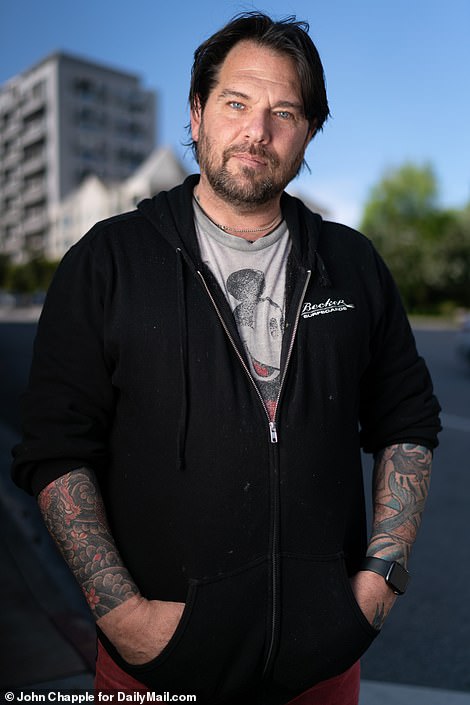 Jason, 50, a former rock star who was once featured in Rolling Stone Magazine, says he still believes the world deserves to see his absentee father’s stunning artwork, regardless of his checkered past

A letter from the Queen’s private secretary Robert Fellowes dated March 27, 1986 invited Hooper to his first sitting with the monarch for a portrait of her he had proposed for the City Hall in Hamilton, Bermuda.

‘The Queen has been pleased to consider your request for a photographic sitting in the near future so that you can make a start on your portrait for Hamilton City Hall,’ Fellowes wrote.

‘Her Majesty has said she would give the sitting to you on Thursday 3rd July at 2.30p.m. here at Buckingham Palace.’

After meeting with the Queen, Hooper went to dinner with friends and revealed he had kept a unique souvenir from the meeting.

‘We had dinner after he had been painting HM Queen Elizabeth,’ Hooper’s friend Paul Medlicott, who edited the memoir of Churchill’s daughter Sarah, recalled in an email to Jason after Hooper’s death.

‘HM had commented that he wasn’t quite accurate with the colour of her lipstick – she always wore the same shade. She called for a tissue and firmly imprinted it with both lips.

‘And then across the dinner table from us Curtis, with a nice flourish, produced the very tissue from his sketch pad.’

A telegram from Fellowes sent the next day arranged a second meeting between the artist and Elizabeth, giving him a strict deadline and a recommendation of a 1977 book on the royal family for inspiration or guidance.

‘I confirm the arrangement for you to have a short sitting with the Queen in order to show her Majesty your finished portrait on 19th November at 2.30 p.m.’ the letter said. 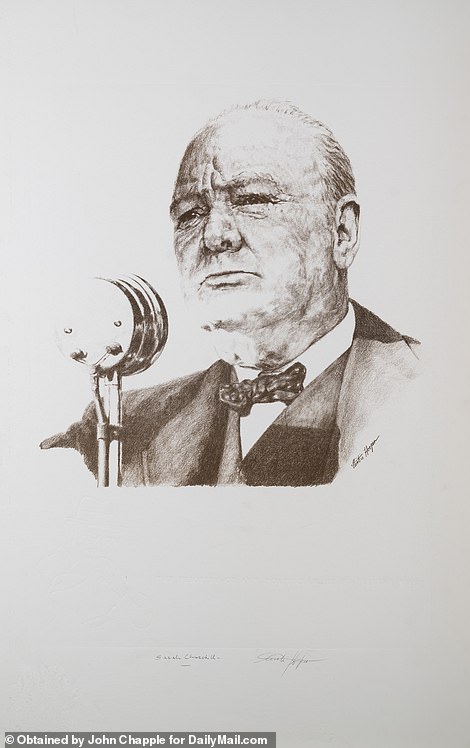 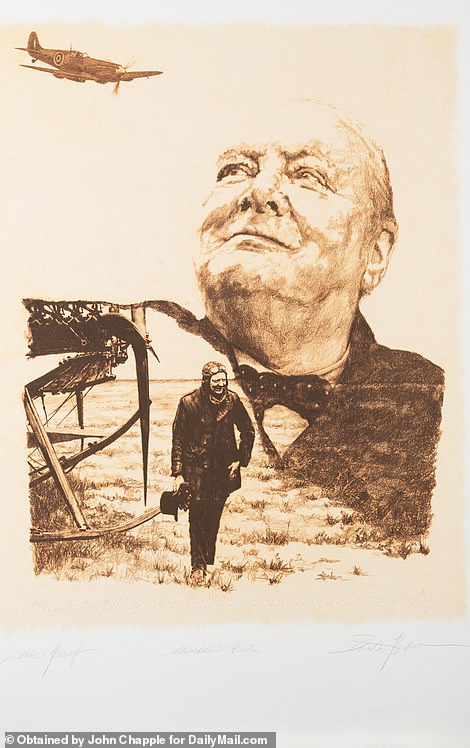 During his career, Hooper also had the privilege of painting British Prime Minister Winston Churchill (pictured) 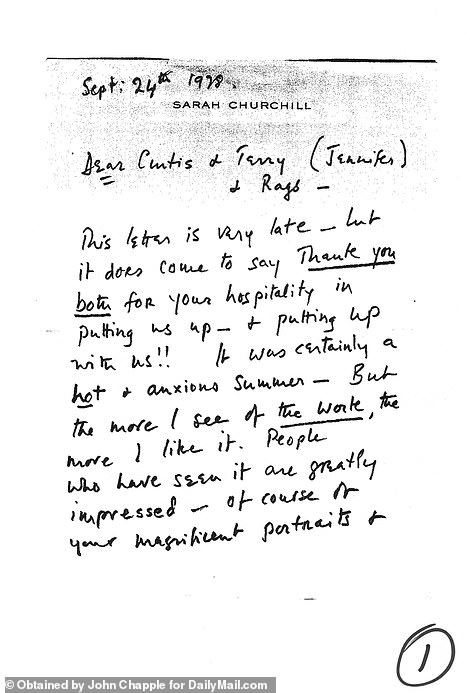 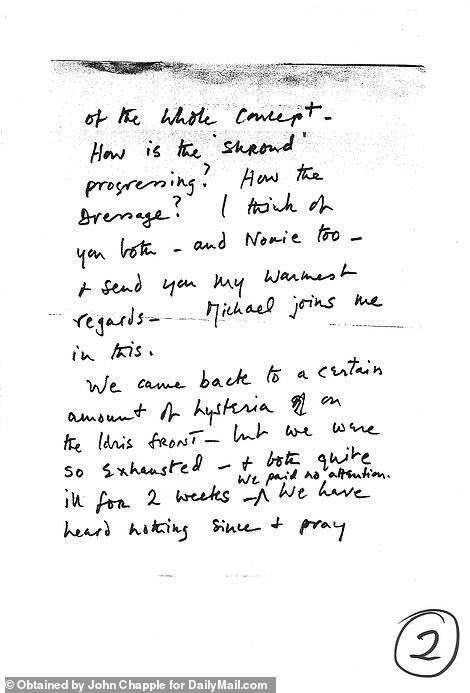 Hooper kept letters from Churchill’s daughter Sarah Churchill. In a letter dated September 24, 1978, she thanked the artist for his ‘magnificent’ work 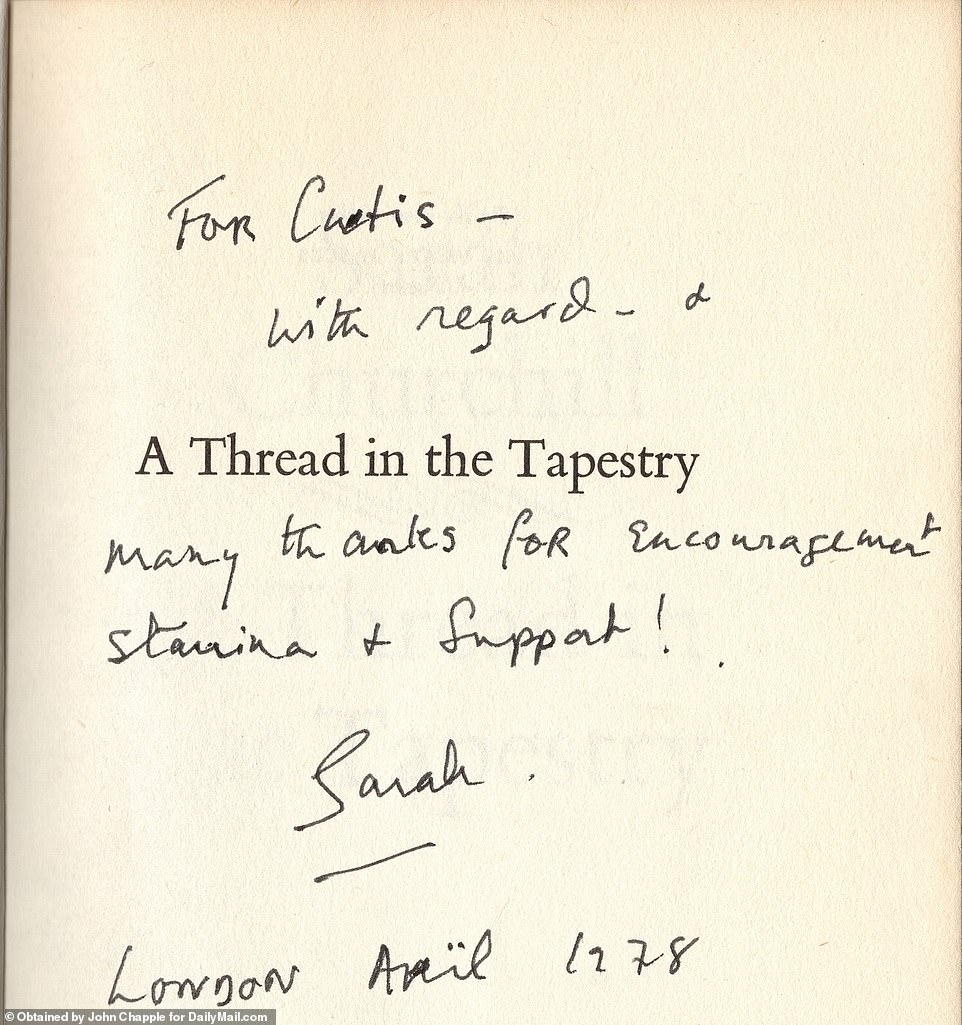 Sarah Churchill had also signed a copy of her memoir, A Thread in the Tapestry, for Hooper in April 1978 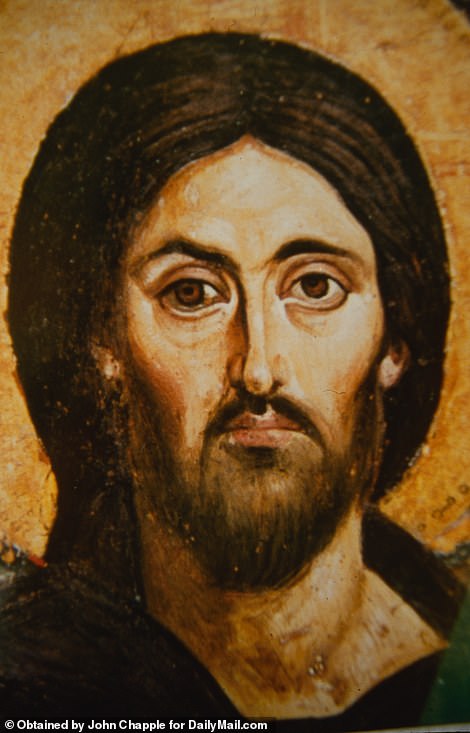 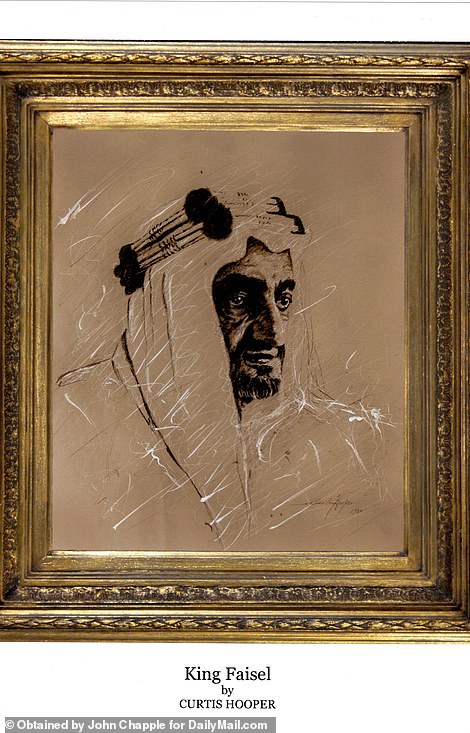 The artist painted portraits of Saudi King Faisal, Peter Sellers, Salvador Dali and even Christ himself, after he was allowed to study the Turin Shroud

‘The book in which the crucial photograph figures is ‘The British Monarchy’ by Philip Howard and not the title I have previously given you. Let me know immediately if you are unable to get hold of a copy and I will send you one by return of post.’

Hooper’s Canadian friend and business partner, Mandeep Singh, told DailyMailTV that Hooper even boasted of dining with the royal family privately after presenting the finished portrait.

‘He said it was a completely amazing experience, having that attention with the Queen. He had one-on-one dinners with the Queen and the royals there,’ Singh said.

‘It was when the painting was complete and he unveiled it for her.

‘He was very proud of it… Fairly recently the Royals reached out to him to paint another picture of the Queen, maybe for her 90th. He mentioned it in 2017 or 2018.’

The 39-year-old Victoria, British Columbia resident said that he was shocked when he discovered after Hooper’s death that the artist had a son.

‘It was really weird. I didn’t ask but my girlfriend at the time did bring it up, ‘what about your children?’ He didn’t mention much about it, he kind of dodged the conversation,’ Singh said. 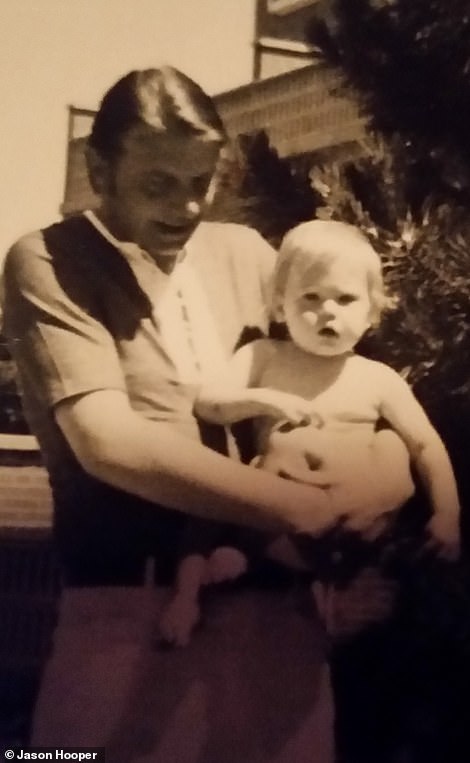 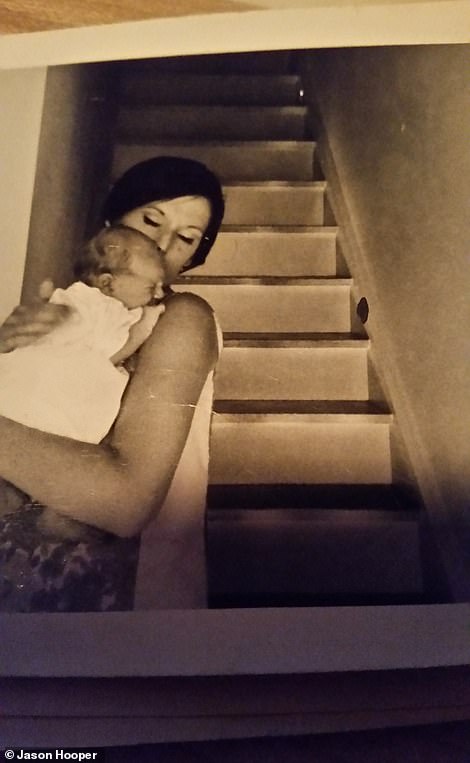 Hooper is seen left in an intimate photo holding his son as a baby. He took the toddler and his mistress Teri on the run from law enforcement for more than two years, until Interpol managed to catch up with Teri and had her fly Jason home to Hooper’s distraught wife Carol (right). 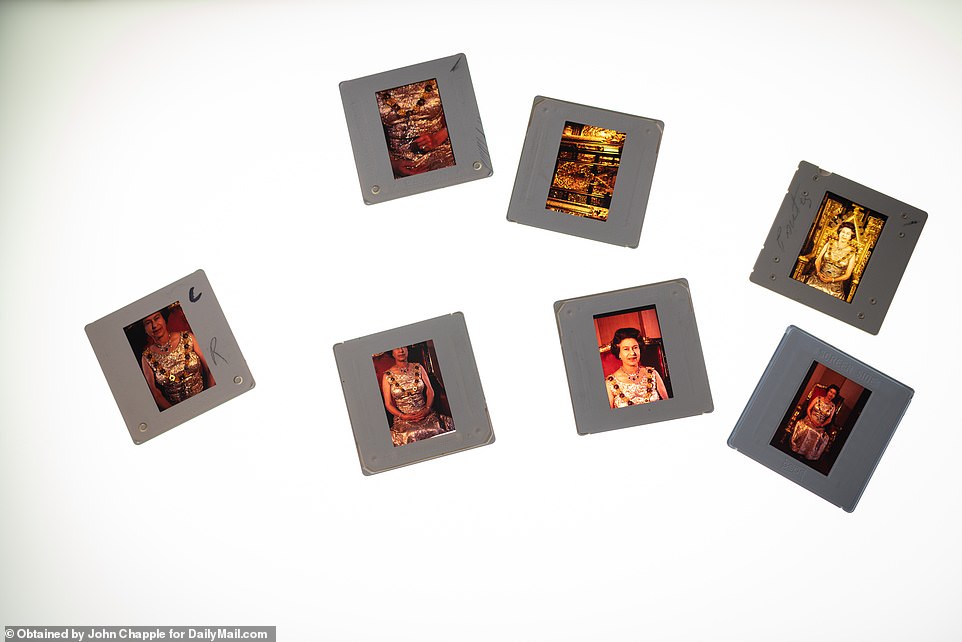 Pictured are some slides of the Queen that Curtis shot during her portrait sitting. Jason said he tried contacting British embassies, the palace, and even the Queen’s private secretary after he found the photos, but received no response

‘He completely denied that he had a son.’

A January 2002 art appraisal by Charles Rosoff of Appraisal Services Associates said Hooper was paid $260,000 by the palace for his portrait of the Queen, and put the total replacement value of his fine art at $1,050,000.

According to a Hamilton city spokeswoman, the oil on canvas painting is set in a ‘heavy ornate carved and cast gilt’ frame in the City Hall foyer.

‘This painting was commissioned by Alderman & Mrs. W.F. ‘Chummy’ Hayward [a late Bermuda philanthropist] and was unveiled in April 1987.’

Jason says though his abandonment has left him livid at his father, he believes the world should see his art.

‘There’s nothing uncommon about my story growing up without a father, or one of your parents being a cheater. I’m not walking around feeling like a victim,’ he said.

‘Learning all of these things about him have stirred and emotionally compromised me. It’s very upsetting. But it’s not like a vendetta.

‘I have all these photos and artwork. I think that the world should see these things.’

According to an archived version of the artist’s now-defunct website, his work is exhibited in the British Prime Minister’s office at Number 10 Downing Street, the New York Met, and the DC National Gallery, among others.

Hooper’s art can soon be viewed at a new website his son is setting up: www.curtishooperart.com.