A year after becoming a global epicenter of the coronavirus pandemic, New York and New Jersey are back atop the list of US states with the highest rates of infection.

Even as the vaccination campaign has ramped up, the number of new infections in New Jersey has crept up by 37 percent in a little more than a month, to about 23,600 every seven days.

About 54,600 people in New York tested positive for the virus in the last week, a number that has begun to inch up recently.

The two states now rank No. 1 and 2 in new infections per capita among US states. New Jersey has been reporting about 647 new cases for every 100,000 residents over the past 14 days. New York has averaged 548.

The situation in New York and New Jersey mirrors a national trend that has seen case numbers inch up in recent days. The US is averaging nearly 62,000 cases a day, up from 54,000 two weeks ago.

Neither state is experiencing anything like what they saw last spring, when hospitals – and morgues – were overflowing. And like the rest of the country, both are in a much better place than in January, at the peak of the pandemic’s winter spike.

But the lack of improvement or even backsliding in recent weeks has raised concerns that the states are opening too quickly and people are letting down their guard too much, just as potentially more contagious variants of the virus are circulating more widely. 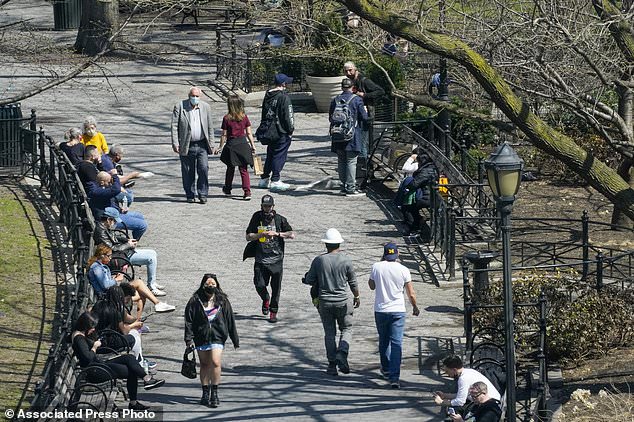 A year after becoming a global epicenter of the coronavirus pandemic, New York and New Jersey are back atop the list of US states with the highest rates of infection. Pictured: People enjoy lunch hour in Manhattan’s Union Square on Friday 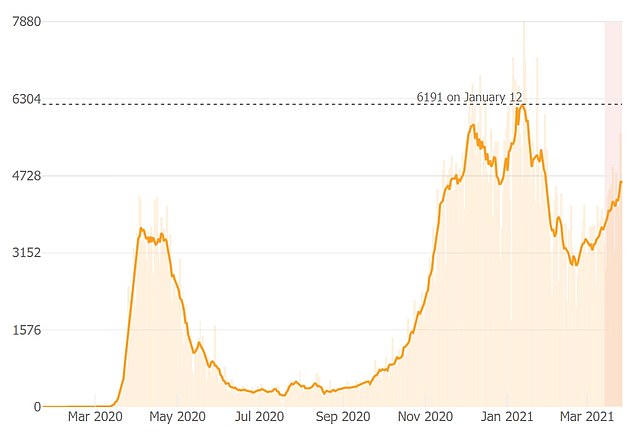 NEW JERSEY: Even as the vaccination campaign has ramped up, the number of new infections in New Jersey has crept up by 37 percent in a little more than a month. Trends for new cases in New Jersey are shown above in a chart from Johns Hopkins University 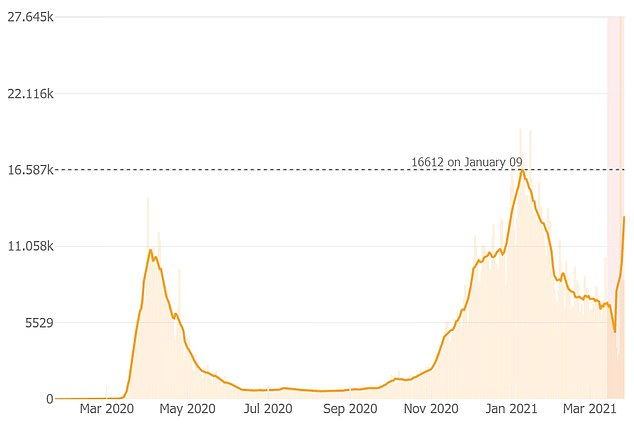 NEW YORK: About 54,600 people in New York tested positive for the virus in the last week, a number that has begun to inch up recently. Trends for new cases in New York are shown above in a chart from Johns Hopkins University

In February, New York Gov Andrew Cuomo allowed the state’s largest stadiums to host sporting events and concerts again, albeit at only 10 percent of normal capacity. New York City movie theaters have been allowed to reopen. Restaurants can now operate at 50 percent capacity in New York City and 75 percent capacity elsewhere in the state. Indoor fitness classes have resumed, too.

New Jersey Gov Phil Murphy has led a similar reopening, with the state’s restaurants also allowed to operate at half capacity and barbers, salons and other personal care businesses resuming trade.

That’s happened in other parts of the country, too.

Utah, Alabama, Arkansas and Indiana will end mask mandates in early April, joining states including Arizona, Texas, Mississippi, Montana and Iowa that have eliminated face covering requirements in recent weeks. Some states are allowing businesses to operate at full capacity.

But in Illinois, the state public health director on Friday emphasized the need to keep wearing masks and socially distancing amid an increase in cases and hospitalizations.

The single-day total of confirmed and probable cases of the illness topped 3,000 Friday for the first time in seven weeks, and hospitalizations have jumped 15 percent in the past five days. 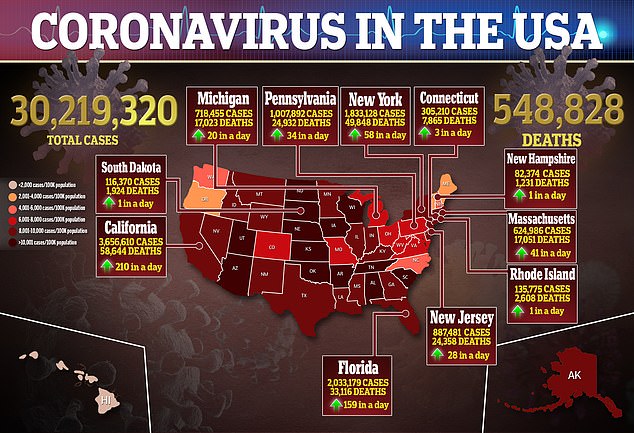 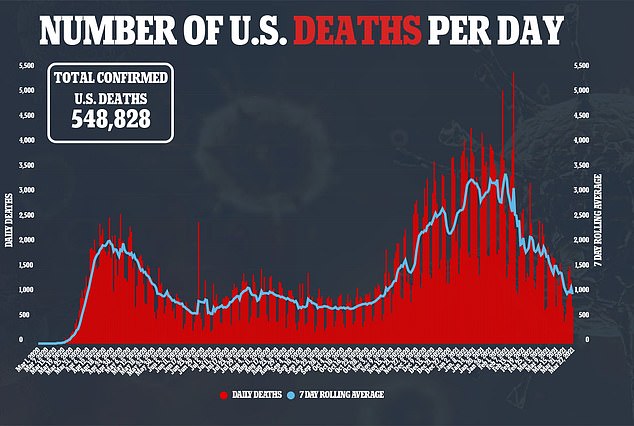 Murphy said in recent days that he is hitting pause on further loosening of the rules because of New Jersey’s resurgence.

The number of people hospitalized with the virus in New York has plateaued around 4,600 since mid-March. New Jersey hospitals are reporting about 2,200 virus patients – up by roughly 300 in the past couple of weeks.

‘They’re spreading more quickly and our vaccination rates are improving every week, but they are certainly not where we want them to be,’ said Bruce Farber, chief of infectious diseases and public health and epidemiology for Northwell Health.

‘Is there something different that’s happening in this part of the country compared to some other parts of the country?’ asked Dr Ed Lifshitz, the medical director of New Jersey’s communicable disease service within the state Health Department. ‘And the answer is probably yes.’ 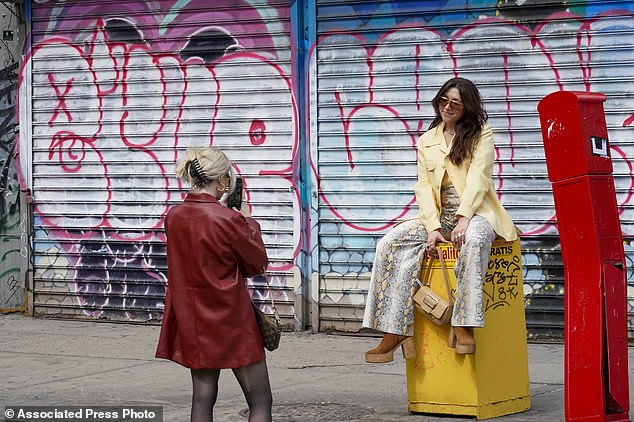 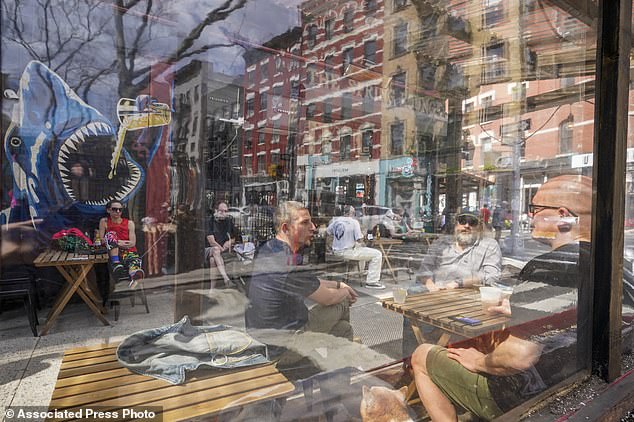 New York City Mayor Bill de Blasio has questioned whether Cuomo is easing restrictions ‘for political reasons,’ despite cause for concern. The governor is facing calls for his resignation over sexual harassment allegations.

But then de Blasio himself announced that 80,000 more city employees would no longer work from home, starting in May.

‘I ask the governor to stick to the science, trust the experts, and pause the planned reopenings now, before they take effect and more are infected,’ Williams said.

Experts worry the public is getting the message that increased vaccination means the state is in the clear, even though only a fraction of the public has completed a full course.

Vaccines lessen the risk of severe illness or death from COVID-19, but scientists are still studying how well they prevent the spread of the virus.

‘To allow larger groups to gather, to give the message to the public that we´re over the worst and that we can go back to normal is a mistake,’ Farber said.

Stony Brook University professor and neuroepidemiologist Sean Clouston said growth in new cases is concentrated in younger people, who can’t get vaccinated in New York unless they have specific health conditions or certain jobs. He said their infection rates could drop once they’re eligible, too. 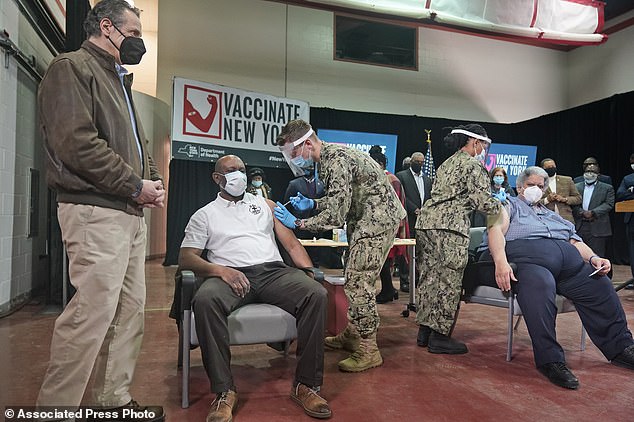 New York Gov Andrew Cuomo (left) watches as Pastor Darryl Frazier (second left) and State Sen. Leroy Comrie get a COVID-19 vaccine before the opening of a mass vaccination site in the Queens borough of New York on February 24 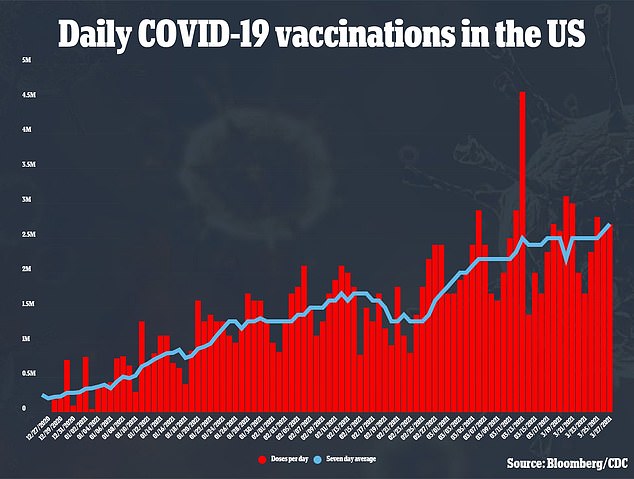 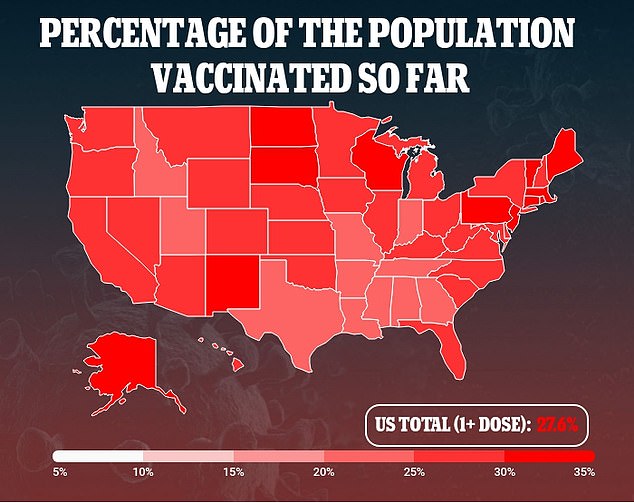