Nicola Sturgeon came under fire last night over her plan to put a divisive independence referendum before the coronavirus recovery.

The SNP leader appeared flustered during the first televised leaders’ debate of the Scottish election campaign.

The First Minister faced an onslaught of dissenting voices as she confirmed that she plans to hold a fresh ballot on her bid to break up the UK within two-and-a-half years.

A rattled Miss Sturgeon even appeared to squirm when she was put on the spot over her plans for another vote, reluctantly committing to holding one in the first half of the next parliament, if elected. 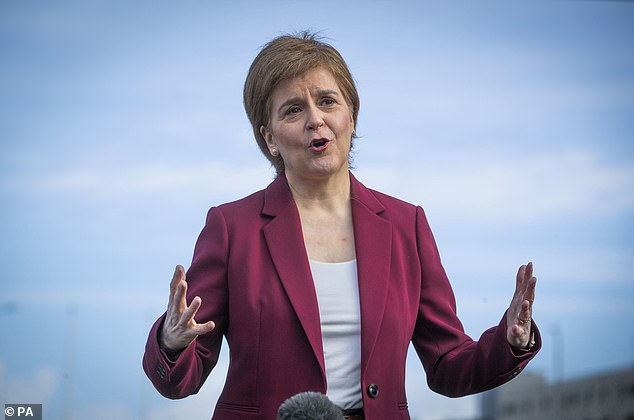 Opponents warned Scotland faces the threat of five years of ‘poisonous’ arguments between Miss Sturgeon and Alex Salmond if the SNP wins the election.

Scottish Tory leader Douglas Ross attacked her for putting issues including education and economic recovery ‘to the side’ in favour of independence.

He said: ‘The final piece of legislation that the SNP laid in front of parliament before the parliament rose for this election was one about independence, because it is their only priority, it is their political priority.

‘We have heard from the studio so far today it’s not the public’s priority and that is why Nicola Sturgeon is wrong and that’s why we can’t have a recovery when the SNP and the Scottish Government are only focused on another referendum.’

Answering questions from members of the public invited to take part virtually in the BBC debate in Edinburgh, Miss Sturgeon found herself on the rack over the constitution.

One audience member, introduced as Selwyn, told her: ‘Nicola Sturgeon said to us she is focused on Covid and all that goes with it. If that’s the case how did she find time to put an independence bill through parliament while we are still suffering Covid? That’s not a focus.’

Another member of the virtual audience at the debate, introduced as Angelica, said: ‘Back in November 2020, Nicola Sturgeon was pushing for another independence referendum.

‘So is the focus really on the Covid recovery or is your focus on a referendum?

Scottish Liberal Democrat leader Willie Rennie said: ‘We will not get through this pandemic, and we will not get a recovery that benefits everyone if we are arguing amongst ourselves all the time.

‘We need to put the division, the exhausting arguments of the past, behind us and focus on the recovery.’ He added: ‘We know it will be a long, divisive argument. We’ve seen the arguments over the last few weeks with Alex Salmond over these issues.

‘I’ve seen a window into the next five years in the last few weeks – arguments over the constitution, strategy about independence; arguments between Nicola Sturgeon and Alex Salmond which have been poisonous and unpleasant. And what we need to do is to put all of that behind us and choose a different future.’

Scottish Labour leader Anas Sarwar was joined by members of other parties in quizzing Miss Sturgeon over her priorities.

‘I will leave other people to judge whether my focus has been on the coronavirus pandemic or not over the past year.

‘People have seen me literally every single day lead the country’s fight against Covid and I have spent literally almost every waking moment doing that, rightly and properly as First Minister.’

The leaders of the five main parties took part in the socially distanced debate, with a virtual audience asking them questions from home.

Other issues included strategy for the coronavirus recovery, education and health. Mr Ross also highlighted a pledge this week by Miss Sturgeon in an election campaign speech that all pupils in Scotland would receive a tablet device or laptop.

He said: ‘Does it really help young people who have been out of school for the last year to offer them a free device at the start of an election campaign rather than the start of a pandemic?’

Mr Sarwar raised concerns about the NHS north of the Border, and referred to a grandmother who has been told that she must travel to London for an operation to treat an aggressive form of cancer because of a ‘backlog’ in Scotland’s health service.

Mary Hudson, 69, was informed that she could not be treated here owing to health service capacity issues caused by a coronavirus backlog, and will instead be forced to endure an eight-hour journey from her home in Glasgow to the NHS Hammersmith Hospital in London.

The Scottish Labour leader said: ‘She [Mrs Hudson] had been diagnosed with ovarian cancer and been told by the NHS in Scotland that due to the backlog of Covid, they are not treating recurring cancers, and would only be treating first time cancers.

‘She has been forced to travel south in order to get that operation.’

People in hysterics at terrible book covers and cringeworthy titles

People in hysterics at terrible book covers and cringeworthy titles

Why is Britain's broadband just not up to speed?