Nissan has showcased its latest concept vehicle – and it’s gone off piste with an electric camper van designed for winter getaways.

With chunky off-road tyres, an elevated ride height and a pair of spotlights for seeing through dense snow storms, this go-anywhere van is ideal for those who like ski and snowboard adventures but are conscious about their carbon footprint.

However, because the Winter Camper concept is based on Nissan’s existing e-NV200 ‘Combi’ MPV, which has a driving range of just 124 miles on a single charge, British winter sports fans should not expect to make it to the Alps without having to stop a few times to replenish its batteries.

It begs the question: are campervans and their long-distance demands ready for the switch to electric power? 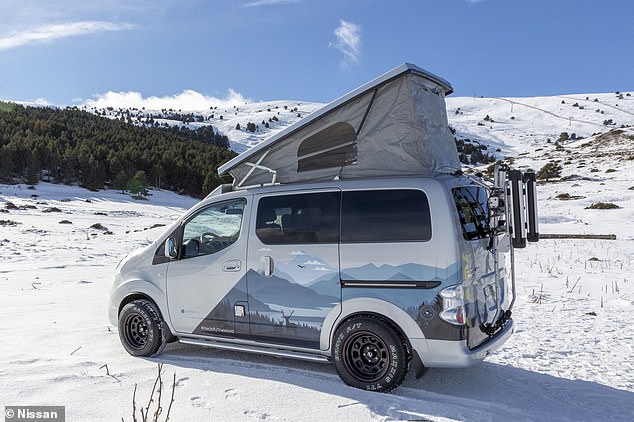 Nissan’s electric campervan concept: The Winter Camper is an alpine-ready van designed for two people to go on holiday

The Japanese brand says that while bracing hikes and fresh-air leisure are currently off the agenda during the pandemic, the e-NV200 Winter Camper ‘looks forward to re-connecting with the marvel of nature and exploring the great outdoors again’.

The van sleeps two people, with the rear bench folding down into one double bed.

There’s also a extending roof compartment for extra headroom once you’ve pulled over at a destination, though this could also provide additional sleeping quarters with the addition of a second mattress.

On the top of the expanding roof section is a solar panel, which is a key feature of the van.

That’s because it charges the on-board 220-volt power pack that runs all the interior equipment.

And there’s plenty built into the vehicle that needs power, not least the heating. 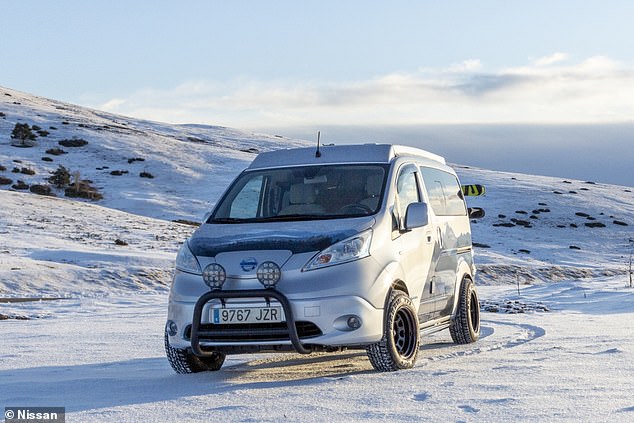 The Winter Camper is based on the existing Nissan e-NV200 MPV – an electric vehicle that costs just under £30,000 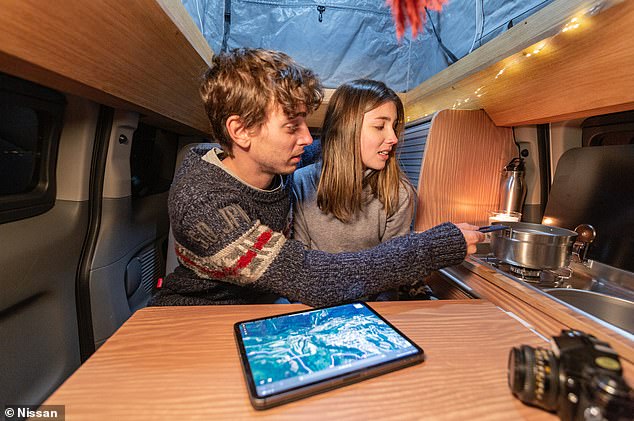 The camper has a fully-functioning kitchen, with a sink, hob and fridge 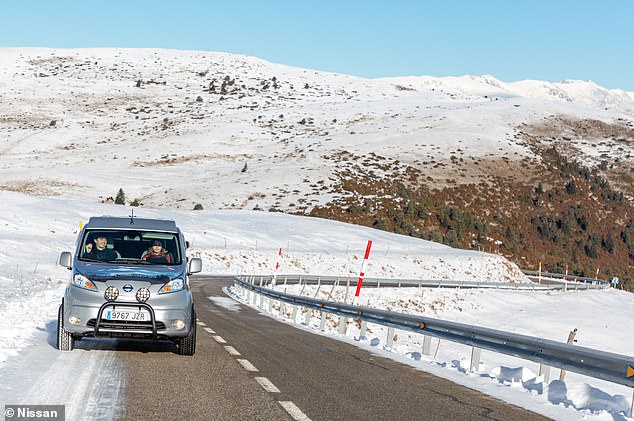 The van includes an integrated kitchen with a fridge, as well as the internal lighting system and plug sockets.

By using the energy harnessed by the solar panel to charges these cabin features means the 40kWh lithium-ion battery pack in the chassis floor only needs to power the vehicle’s drivetrain.

That means the claimed driving range on a full charge – according to official combined figures – is just 124 miles.

So Uk buyers had best hope there are charge points on the way to your ski resort.

If you can locate a rapid charging device, boosting the battery capacity from 20 per cent to 80 per cent takes between 40 minutes and an hour.

Finding one of these on a remote route up the side of a mountain are pretty slim at the moment.

A full charge from a wallbox takes seven and a half hours, and from a mains socket takes the best part of a day (21 hours).

Hopefully by the time Nissan decides to make a Winter Camper a reality, battery development will have come on leaps and bounds and longer driving ranges will be available.

The camper is also fitted with insulated glass – a necessity for a van designed for the holidays in the coldest of climates – and the combination of long-travel suspension, treaded off-road rubber and 5400-Lumens twin-spotlights mounted to the front, mean it should be more than ready for an alpine trek. 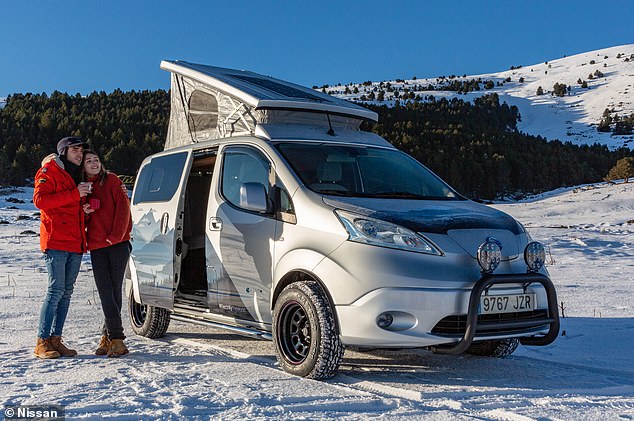 The van sleeps just two people, with the rear bench folding down into a bed. However, there is additional room in the extending roof compartment 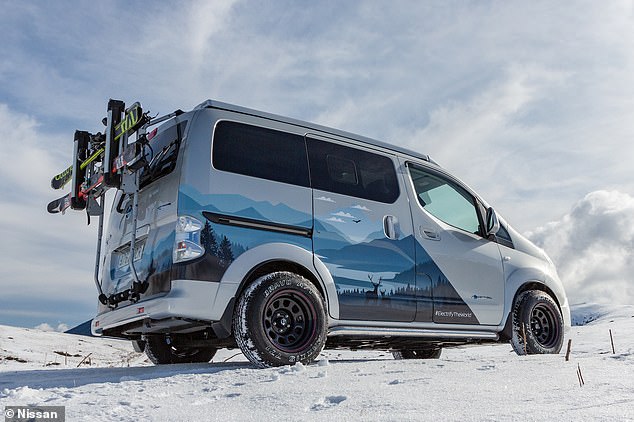 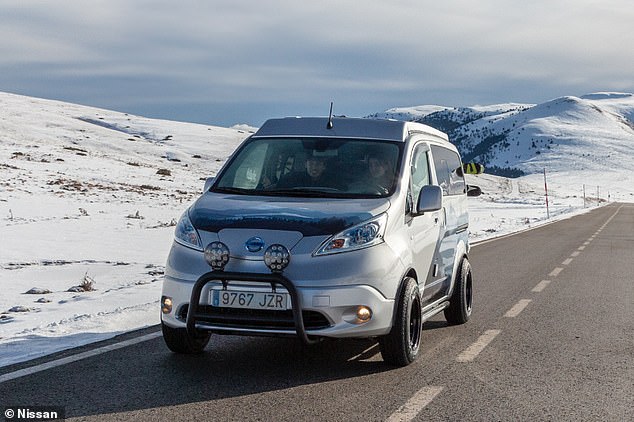 The Winter Camper is only a concept vehicle for now, featuring chunky off-road tyres and high-powered spotlights for when drivers are caught in snow storms

The concept vehicle previewed by Nissan also shows the interior featuring a fold-out table in the rear passenger compartment, though unlike other campers already on the market it doesn’t have swivel front chairs so four can sit around the worktop.

It does, however, have a ski rack that mounts to the boot door to save having to transport them inside the van.

Speaking about the Winter Camper concept, Nissan Europe’s Dmitry Busurkin says some of the features in the concept can be ordered for the e-NV200 on sale today.

‘For Nissan, electric mobility is all about offering an exciting experience behind the wheel – while above all remaining conscious of our impact on the environment,’ he said.

‘Imbued with the essence of adventure and thrilling electrified power, the Nissan e-NV200 Winter Camper concept van is an expression of the future of zero-emissions mobility.

‘This vision, and the innovative set of accessories available with the standard e-NV200 models, will get drivers and outdoor enthusiasts alike excited for the adventures we’re all craving in the future.’ 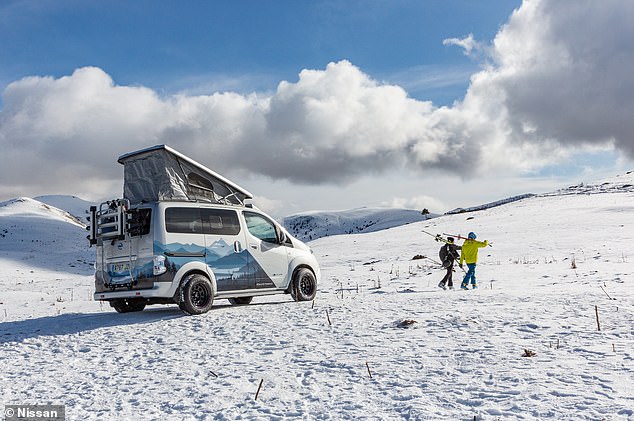 With a range of just 124 miles, campervan enthusiasts will argue that electric powertrains need to come on leaps and bounds before they can be used in these types of vehicles 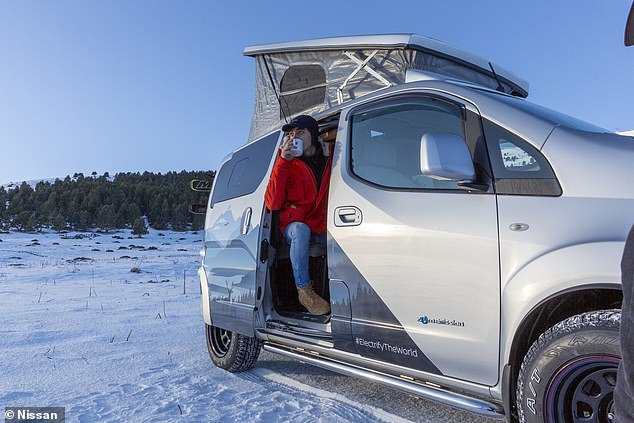 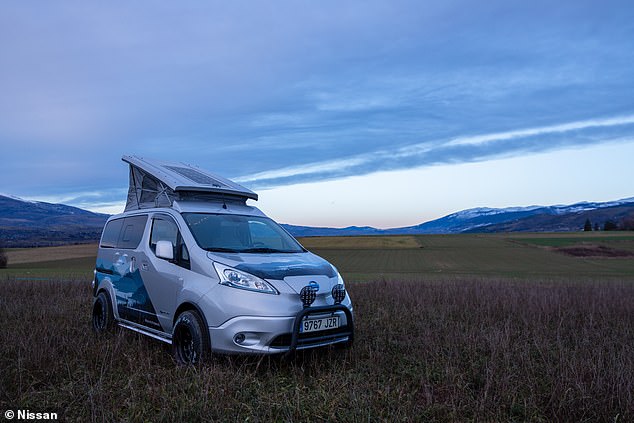 SAVE MONEY ON MOTORING

Out is the new in: It's time to spruce up your outside space

Angelina Jolie is surrounded by security after enjoying dinner with daughter...