Some 321 tankers and cargo vessels are now stuck waiting to transit the Suez Canal which has been blocked for the past five days.

Authorities have so far been unsuccessful in their attempts to dislodge the massive 1,900-ft long Ever Given, which is firmly lodged around 3.7 miles north of the southern entrance of the canal, near the city of Suez.

The head of the Suez Canal Authority said strong winds were ‘not the only cause’ for the Ever Given running aground on Tuesday, appearing to push back against conflicting assessments offered by others. Lt. Gen. Osama Rabei told a news conference Saturday that an investigation was ongoing but did not rule out human or technical error. 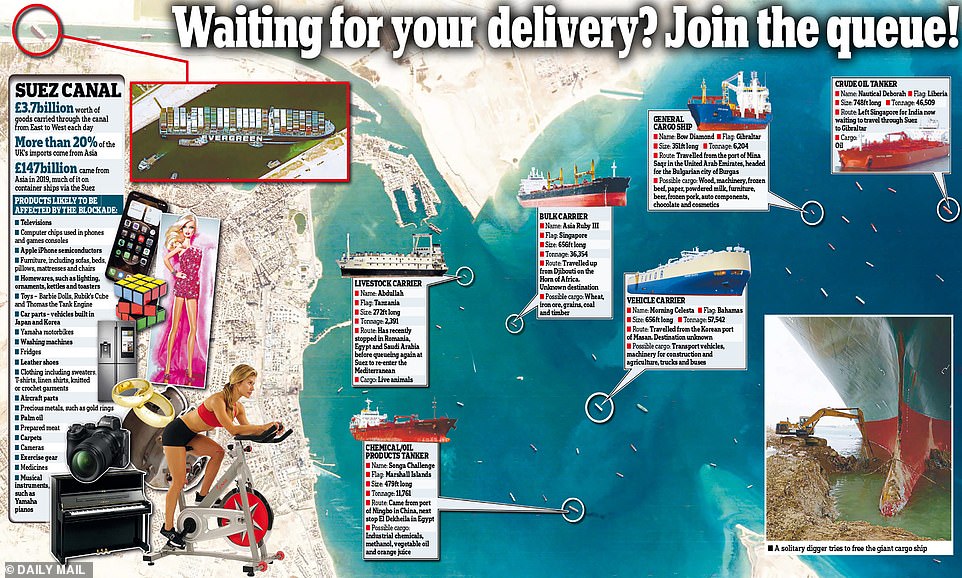 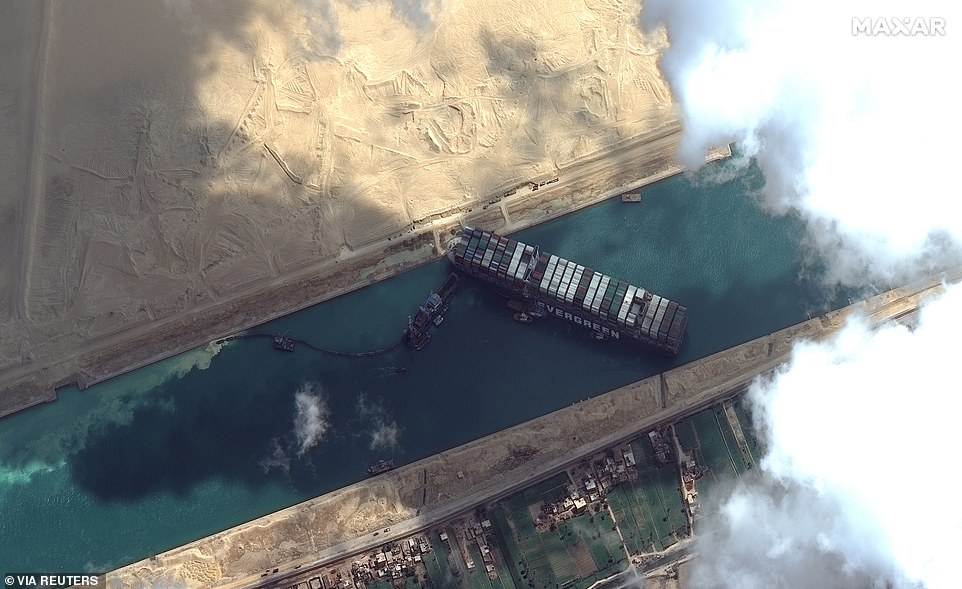 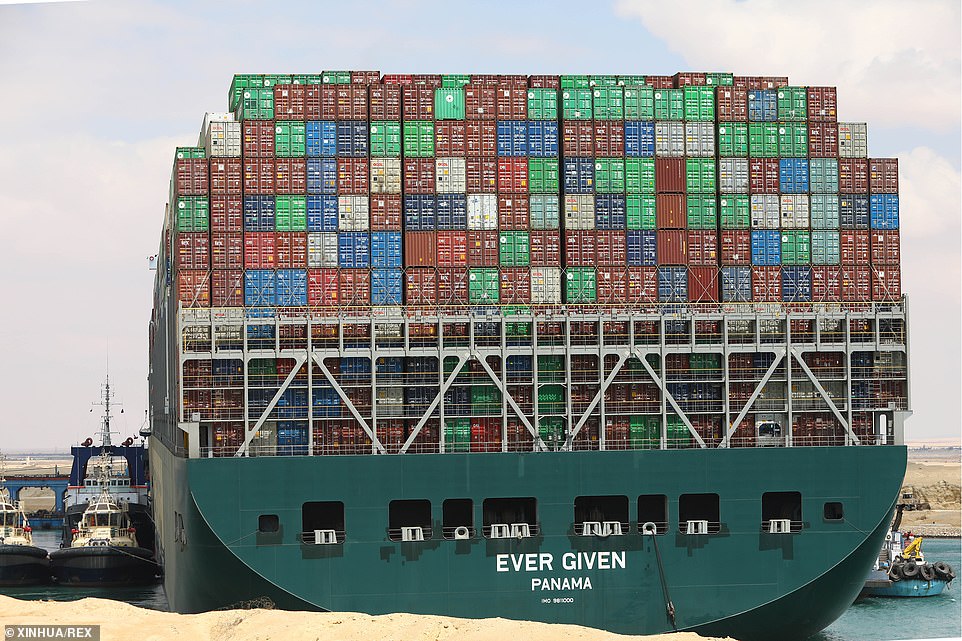 There are fears goods such as washing machines, car parts and toys which are commonly imported from China and other Asian trading partners could be in short supply as cargo ships destined for Europe remain stuck in the bottleneck

Rabei said he could not predict when the ship might be dislodged. A Dutch salvage firm is attempting to refloat the vessel with tugboats and dredgers, taking advantage of high tides.

Rabei said he remains hopeful that dredging could free the ship without having to resort to removing its cargo, but added that ‘we are in a difficult situation, it’s a bad incident.’

Shoei Kisen, the company that owns the vessel, said it was considering removing containers if other refloating efforts fail.

Since the blockage began, a maritime traffic jam has grown to more than 320 vessels waiting on both ends of the Suez Canal and in the Great Bitter Lake in the middle of the waterway.

Peter Berdowski, CEO of Boskalis, the salvage firm hired to extract the Ever Given, said the company hoped to pull the container ship free within days using a combination of heavy tugboats, dredging and high tides.

He told the Dutch current affairs show Nieuwsuur on Friday night that the front of the ship is stuck in sandy clay, but the rear ‘has not been completely pushed into the clay and that is positive because you can use the rear end to pull it free.’

Berdowski said two large tugboats were on their way to the canal and are expected to arrive over the weekend. He said the company aims to harness the power of the tugs, dredging and tides, which he said are expected to be up 20 inches higher Saturday.

‘The combination of the (tug) boats we will have there, more ground dredged away and the high tide, we hope that will be enough to get the ship free somewhere early next week,’ he said.

If that doesn’t work, the company will remove hundreds of containers from the front of the ship to lighten it, effectively lifting the ship to make it easier to pull free, Berdowski said.

A crane was already on its way that can lift the containers off the ship, he said.

The salvage mission was turning its focus to the ship’s lodged bow, after some progress was made towards freeing the ship’s stern, the canal service provider Leth Agencies said Saturday. 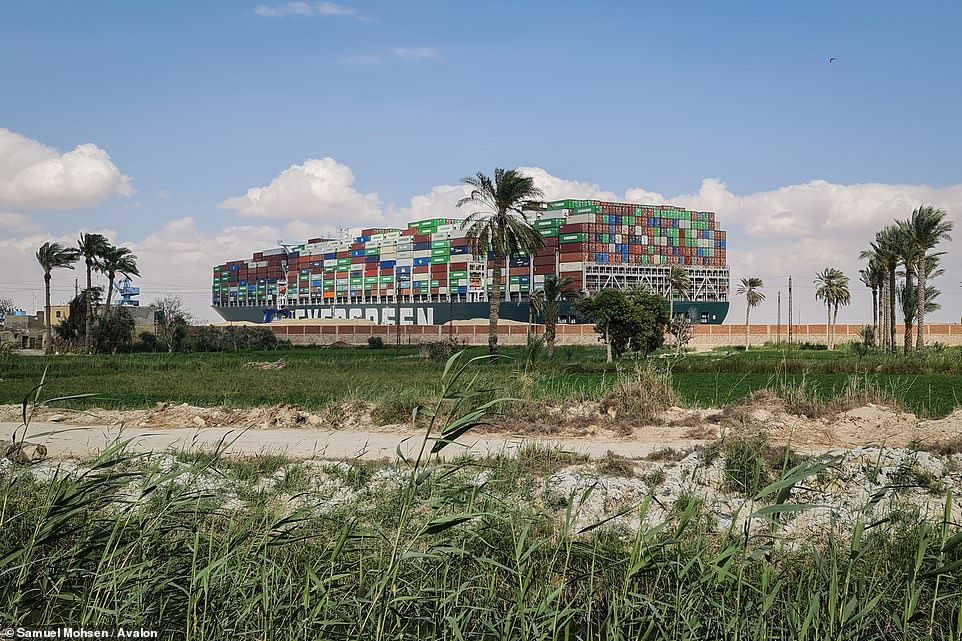 Bernhard Schulte Shipmanagement, the Ever Given’s technical manager, said Friday that its initial investigation showed the vessel ran aground due to strong winds and ruled out mechanical or engine failure. However, Rabei seemed to be pushing back against that assessment Saturday.

A prolonged closure of the crucial waterway would cause delays in the global shipment chain. Some 19,000 vessels passed through the canal last year, according to official figures. About 10% of world trade flows through the canal. The closure could affect oil and gas shipments to Europe from the Middle East.

Some vessels began changing course and dozens of ships were still en route to the waterway, according to the data firm Refinitiv.

It remained unclear how long the blockage would last. Even after reopening the canal that links factories in Asia to consumers in Europe, the waiting containers are likely to arrive at busy ports, forcing them to face additional delays before offloading.

Analysts say an estimated £290million worth of trade is being held up every hour the ship remains wedged across the canal.

More than 200 vessels were caught in the logjam after the Ever Given – which is almost as long as the Empire State Building is high – ran aground on Tuesday amid strong winds and a dust storm sweeping off the Egyptian desert as it sailed from China to the Mediterranean.

As experts warned of ‘major real world consequences’ as a result of the crisis, rescuers admitted they may have to bring in 200ft cranes to unload some of the ship’s 20,000 containers to help refloat it.

The complex operation could cause weeks of disruption – forcing cargo ships at the canal to take a two-week detour around Africa’s Cape of Good Hope.

The blockage has already disrupted global supply chains for everything from grains to baby clothes. Last night the White House said it is seeing the impact of the incident on energy markets and would respond to the situation if required.

And Downing Street has previously warned of the prospect of delays to goods entering the UK.

More than 20 per cent of Britain’s imports – worth more than £147billion – came from Asia in 2019, much of it on container ships using the Suez Canal to enter the Mediterranean.

There are fears goods such as washing machines, car parts and toys which are commonly imported from China and other Asian trading partners could be in short supply as cargo ships destined for Europe remain stuck in the jam.

It is hoped the specialist suction dredger which arrived at the site yesterday could see the ship refloated within days.

Joe Reynolds, of the Maersk Ohio – a US-flagged container ship anchored in the Red Sea on the southern side of the bottleneck, said the gridlock was like ‘a traffic jam on the M5’.

‘Standing outside, as you look, everywhere around you is ships,’ he told Radio 4’s Today programme. ‘It’s going to affect shipping schedules around the world.’

The backlog of vessels is putting additional pressure on European ports and the international supply of containers, which is already strained by the pandemic. ‘Even if the situation is resolved within the next 48 hours, port congestion and further delays to an already constrained supply chain is inevitable,’ ratings agency Moody’s said.