When Ollie Watkins woke up on Friday he would have thought he was still dreaming.

Those are boyhood dreams and the striker fulfilled them within 20 minutes of coming on as second-half substitute during the Three Lions’ 5-0 World Cup qualifying win over San Marino. 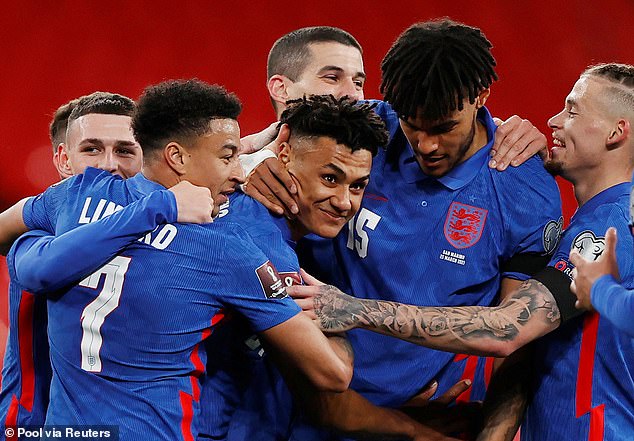 March 25, 2021 will be a day that Ollie Watkins (centre) never forgets after scoring for England 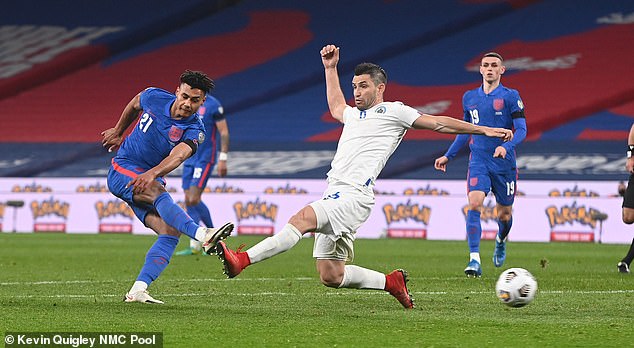 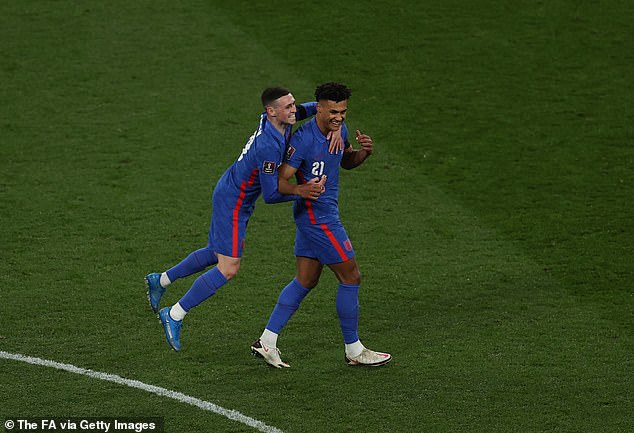 Just over six years ago he was playing in the Conference South for Weston-super-Mare on loan from Exeter City. Now he’s strutting his stuff at the home of English football following a meteoric rise.

The path from non-league to international stardom was brought to the fore most recently and famously by Leicester City talisman Jamie Vardy and Watkins has now followed in those footsteps.

Watkins is a product of Exeter City’s academy – a club which is about 20 miles from where he was born and grew up in Newton Abbot, Devon.

Having initially failed to earn a spot within the club’s youth ranks at Under 9 level in 2003, he eventually did so with the U11s.

‘I joined [Exeter] at U9s,’ Matt Jay, who has come through the Grecians’ ranks to become their star striker and remains Watkins’ closest friend, told the Times.

‘I think the story is that Ollie didn’t make it [was rejected] that year, but came back the next.

‘You could tell he had something, but people develop at different rates. Exeter’s academy was all about technical ability. I’m not saying that Ollie wasn’t blessed with that, but he wasn’t the best player there, for sure. He was very fast but he was a late developer.’

And blossom he truly did. He scored 30 goals for the U18s as they won the League Three South-West Division of the Professional U18 Development League in 2013-14. They pipped Bristol Rovers U18s by better goal difference of six – highlighting the significance of Watkins’ goalscoring ability. 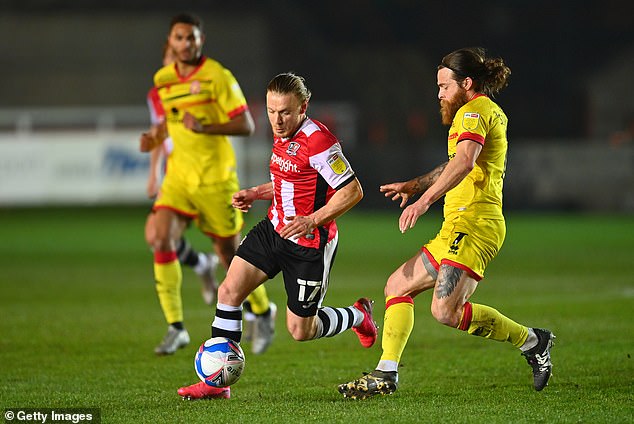 His prowess there saw him rewarded with a two-year professional contract in April 2014 and he soon given his first taste of first-team football when he was named on Exeter’s bench for their season-finale against Hartlepool United.

Leading 2-0 at Hartlepool, Watkins came on as a 77th-minute substitute to cap a memorable campaign for the then-teenager.

The following term saw Watkins drop down two divisions to Weston-super-Mare as he sought regular first-team football. Initially joining on a one-month loan alongside Jay, the pair quickly endeared themselves to the non-league outfit.

‘He came in with Matty Jay and we were all sharing lifts together,’ Weston midfielder Jacob Cane told Bristol Live.

‘Ollie got straight in and bonded with the lads, he hit the ground running, though there were a couple of games he started on the bench and he had to play for his spot.

‘He settled in really well. We had a really good group of funny lads and everyone got on really well and had a laugh, so it was probably the perfect group for him to go into for his first experience of a loan.’ 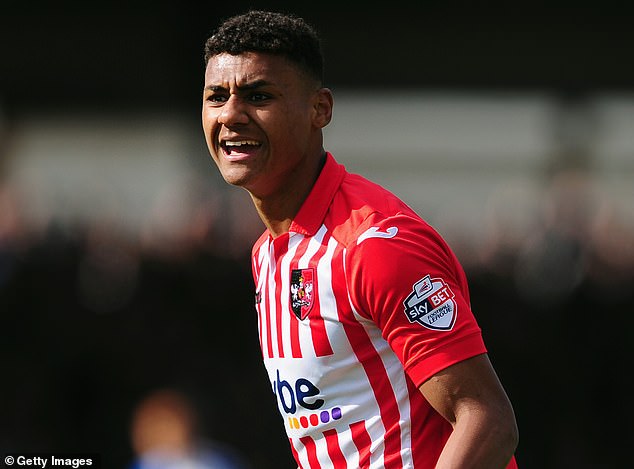 The results of the loan are telling. He scored 10 goals in 25 appearances that season as Weston-super-Mare kept renewing his and Jay’s deals every month eventually until the end of that 2014-15 season.

His contribution was vital as relegation-threatened Weston secured safety before the final day of the season. He played predominately as a left winger then – highlighting his cutting edge in the final third even more.

He scored many a memorable goal that campaign – including the winner in a 1-0 victory at Ebbsfleet alongside strikes against Bishop’s Stortford and Wealdstone – but success hasn’t changed him.

‘He’s exactly the same bloke,’ Cane continued. ‘So grounded, such a good lad. I watched his England live interview the other day and he said he wants to do it for his family. He’s got such a good family and I’m really happy for all of them, because he works so hard and he deserves it. He never settles and he always wants the next best thing, that’s his mindset.

‘He’s not changed one bit. At Weston he’d be so disappointed if he didn’t have a great game. If there was ever a step back it was followed by three or four steps forward.’ 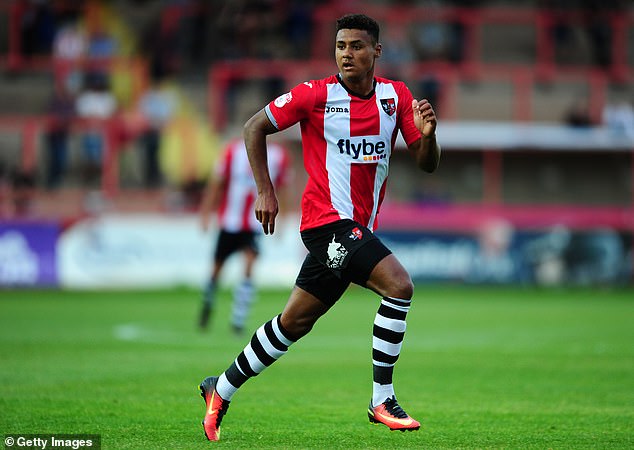 And those steps forward continued upon his return to Exeter for the 2015-16 season.

After failing to make a first-team squad in the opening two months of the campaign, by the end of it he had established himself as a member of the starting XI. He finished the term with nine goals in 22 appearances – including two as Exeter came from behind to beat bitter rivals Plymouth in the Devon derby. His winner was subsequently voted as the Grecians’ Goal of the Season.

His appearances and goalscoring numbers increased the following campaign as he scored 16 goals in 52 appearances for the club. However, that season ended in heart-breaking fashion as Exeter lost the League Two Play-off Final 2-1 to Blackpool at Wembley.

That was to be the final match for Watkins at Exeter, who was named the EFL Young Player of the Year that season, as he joined Brentford for an undisclosed fee.

‘The fans still sing “he’s one of our own”. They loved Ollie and he loved being here,’ reflected Exeter City’s president Julian Tagg to BBC Sport. 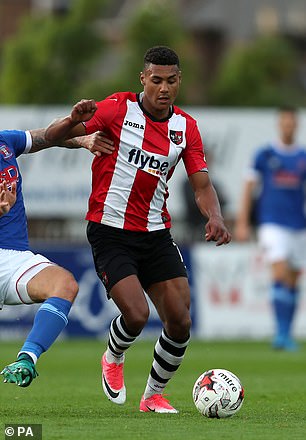 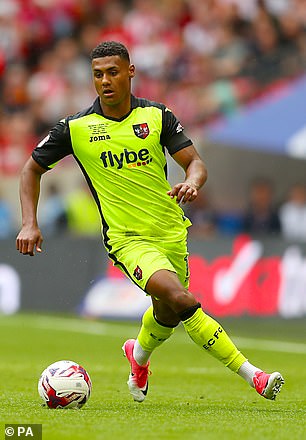 He made a name for himself at Brentford too as he took the Championship by storm.

Signed by Dean Smith, now his manager at Villa, Watkins would go on to score 49 goals in 143 appearances for the west London outfit. Seasons 2017-18 and 18-19 saw the Bees buzz around mid-table in the Championship but they and Watkins stung most of the division last year.

They finished third, missing out on the second automatic spot by two points to West Bromwich Albion, before losing the play-off final 2-1 to local rivals Fulham in extra-time.

It was Watkins’ second Wembley woe in four seasons but he had enjoyed a fine individual campaign at Griffin Park – scoring 26 times to finish as their top goalscorer.

His feats in west London earned a move to the Premier League last summer, and a reunion with Smith, as Villa splashed a club-record £28million fee – which could rise to £33m – to acquire his services. 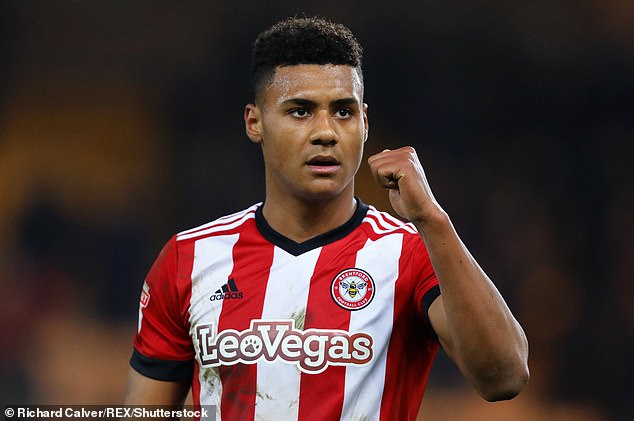 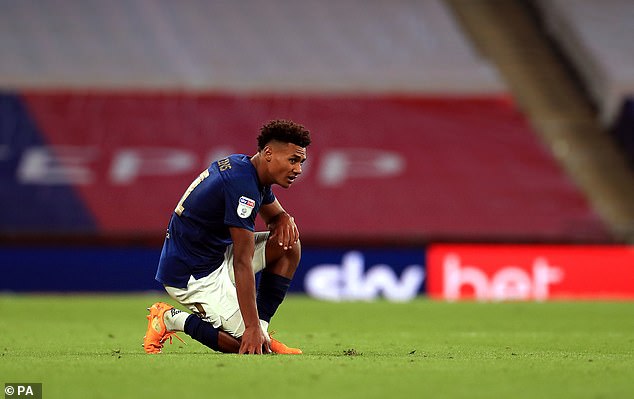 ‘An absolute class act on and off the pitch,’ wrote a Brentford fan on The Griffin Park Grapevine fan forum. ‘Gave absolutely everything had a stunning season last year.

‘Deserves everything he’s got coming to him and should get an England call up now too. Good luck young man.’

Smith was delighted with the signing of Smith as he said: ‘Ollie has developed into one of the most sought-after strikers in the country.

‘We are looking forward to seeing him show his great qualities in an Aston Villa shirt.

‘He is a hugely determined character who has both the ability and personality to succeed at the highest level.’ 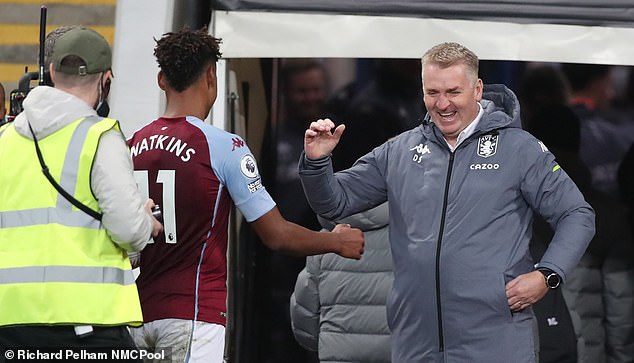 And succeed he has so far at Villa Park. He has 12 goals in 31 appearances for the Villans this season – including a memorable hat-trick in a 7-2 win against champions Liverpool on October 4, 2020.

‘It’s just a sign of his mindset, the way he works and the way he thinks. He is always looking to progress and I believe we are a progressive club and we sold that to him when he was deciding to come.

‘He has always wanted to keep getting better and England was in his mind, and he has earned that right by putting the performances in.

‘He’s one of the most hard-working individuals I’ve worked with. The biggest thing has always been his attitude and selfless nature to the team.’ 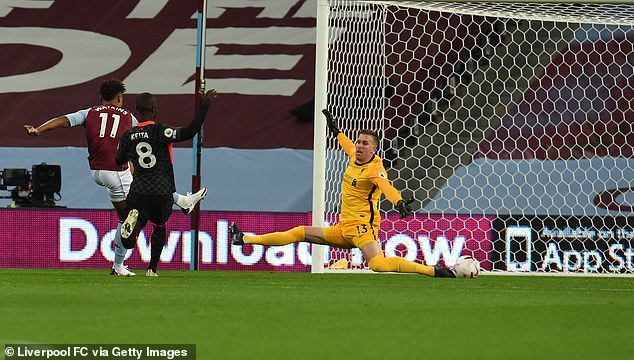 Watkins scored a hat-trick vs Liverpool for Villa in an emphatic 7-2 win on October 4, 2020

Smith’s sentiments have been endorsed by his team-mates and coaching staff this season. On Thursday, assistant manager John Terry showed his support for the 25-year-old on his Instagram story, while watching the England game.

‘It’s unbelievable, it’s what I’ve dreamt about, being in the hotel today,’ Watkins said on Thursday night after his England debut.

‘I’ve just been hoping to get the chance and enjoy it, to get an opportunity to score and I didn’t think it would happen, I’m speechless to be honest.

‘I just feel honoured to come here and put on this shirt and play with these players, and to score on my debut, you couldn’t write. I’m just over the moon. I’m 100 per cent getting the shirt signed and framing it.

‘I didn’t put that pressure on myself, I just wanted to get on the pitch. I have had the chance and I can’t believe it.’ 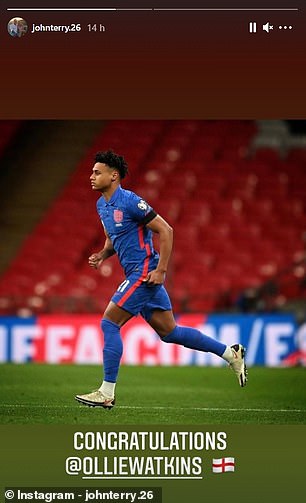 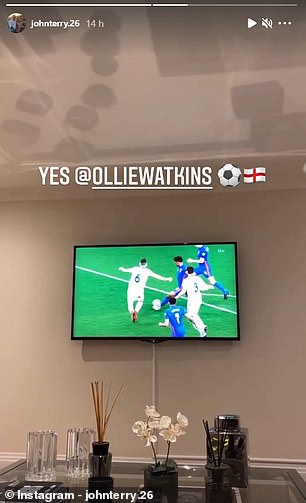 On his chances of gatecrashing England manager Gareth Southgate’s Euros squad, he added: ‘I’ve just got to take each game as it comes, focus on club form, play consistently for Villa.

‘Help my team push up table and get into Europe.’

Southgate said: ‘The reaction to his goal told you a lot about this squad – they were so pleased for him they make it easy for young players to bed in.’

According to The Athletic, Exeter and Brentford are due to cash in on their former star’s international honours.

The publication reports that Brentford inserted a clause into his deal with Villa that sees them earn £1m every time he plays for England, up to a small number of caps. Then of that fee, Exeter are entitled to a 15 per cent cut – totalling £150,000. Watkins will be walking on cloud nine on Friday but those who know him best say it won’t change his demeanour one bit.

‘Oliver is a man of very few words,’ his mum, Delsi-May told the Times.

‘We’ve got a family group chat, and he never brags or anything, we literally have to draw everything out of him. He’s so humble and I love that about him.

‘He’s quite nonchalant about the fact that he’s doing something he loves. He assumes it’s the norm, but it’s not. I’m immensely proud.’

His mother’s pride will be matched by Weston-super-Mare, Exeter, Brentford and Villa too. After having a taste of international football, he’ll be hoping to kick-on and feature against Albania and Poland next with the aim of being part of England’s Euros squad. 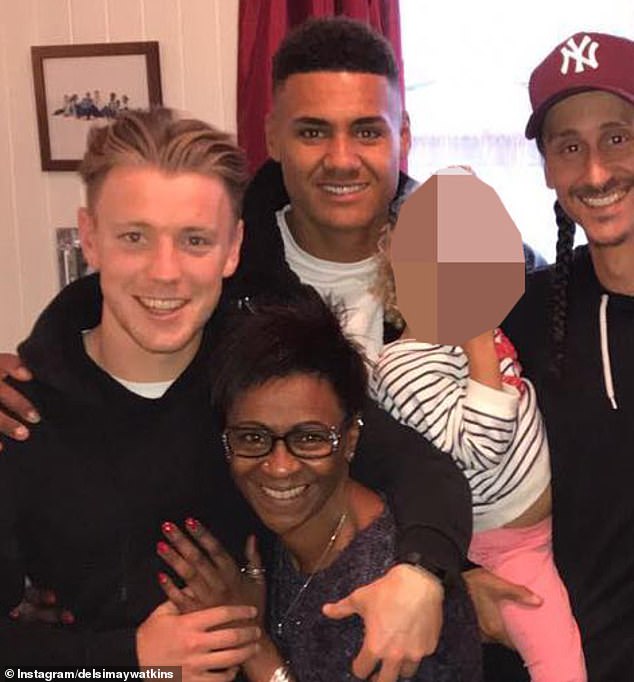