Marley is magic but the drama needs some redemption: PATRICK MARMION reviews the first night of Get Up, Stand Up!

By Patrick Marmion for the Daily Mail

The story of Bob Marley has long been crying out to be made into a stage show. Now at last, 40 years since the great man died, he’s finally set Shaftesbury Avenue throbbing with his deep reggae beats.

But, much as I love Marley and his music, this version, written by Lee Hall (best known for the Billy Elliot and Rocketman screenplays) left me slightly cold and faintly baffled.

And yet it’s such a great story…

Born Robert Nesta Marley in 1945, he rose from the slums of Kingston, Jamaica, abandoned first by his white father and then by his black mother, only to assert himself in the rigged music scene of his country – before literally getting caught in the crossfire of political feuds in the 1970s. 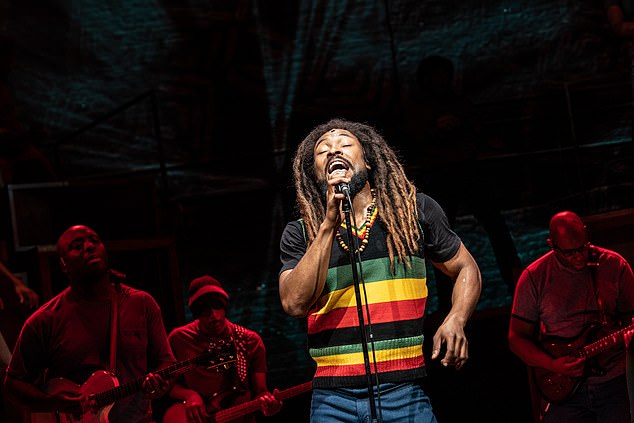 Star turns: Arinze Kene is an energetic Bob Marley. Kene has a luminous smile, an energetic stage presence and a wonderful, soulful voice which he pours into a rousing solo rendition of Redemption Song

All that and more is wedged into Hall’s plot without shedding much light on any of it or gathering much dramatic momentum in the process. At times (God forbid) it’s even a tiny bit dull.

Does it matter, though? Maybe not. There’s always the music and, in Arinze Kene, they have an energetic, boyish, passionate and charismatic embodiment of Bob, a man driven by strong Rastafarian beliefs.

All the greatest hits are here too, kicking off with Lively Up Yourself and Could You Be Loved. They are martialled into a somewhat corny attempt to illustrate the singer’s life – as when Jamaica’s Miss World Cindy Breakspeare (Shanay Holmes) sings Waiting In Vain while fighting for Bob’s love.

Yet Marley’s life was too complex and too troubled to suit the Mamma Mia! approach of simply ticking off the hits.

Instead, let’s be honest, the real reason we’re here is to do exactly as we’re told by the title. But it’s not until we hit Jamming, just before the interval, that actually happens.

And although proceedings do lively up themselves in the second half, with a bit more ‘fire in Babylon’, it wasn’t until the finale – with a reprise of Could You Be Loved and Get Up Stand Up – that we were back on our feet again. 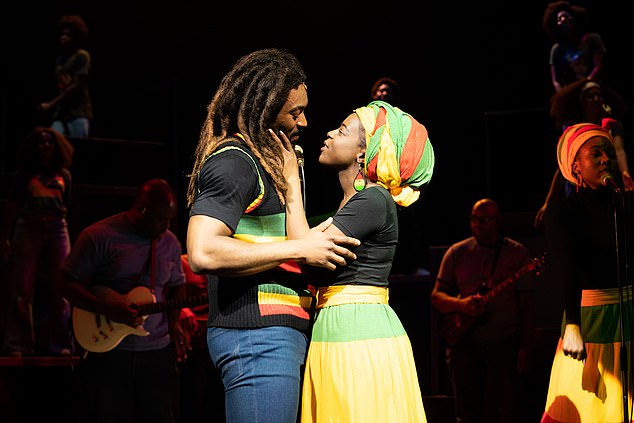 Kene has a luminous smile, an energetic stage presence and a wonderful, soulful voice which he pours into a rousing solo rendition of Redemption Song. Tears mingle with the sweat from his brow as he laments the injustice and agonies of black history.

Yet director Clint Dyer has him collapse at the end of this stunning performance before the audience can get up, stand up and applaud what should be his finest, showstopping moment.

Among the other characters only Gabrielle Brooks as Bob’s long-suffering wife Rita really stands out.

Although his infidelity and mistreatment of her are soft-pedalled, she turns her rebuke, in No Woman, No Cry, into a blast of Biblical wrath.

Dyer’s production is otherwise a bit tame. Shelley Maxwell’s choreography is mostly rudimentary skanking and jiving while Chloe Lamford’s set design is little more than two walls of pine speakers that roll back and forth. The sound that comes out of those speakers, though, is something else.

And even if so much more could have been made of Marley’s short but extraordinary life, there will never be a time when I don’t want to hear his sweet reggae music.