Patti Newton said her husband Bert never fully recovered from the surgery on his leg.

‘It was complications with everything,’ she told Daily Mail Australia on Monday, two days after the legendary entertainer died at age 83.

‘When you have a leg amputated you have to be on a lot of painkillers and Bert had had, just this year alone, he’s had eight procedures, which all involved anaesthetics and that effects you pretty badly,’ said the 76-year-old entertainer. 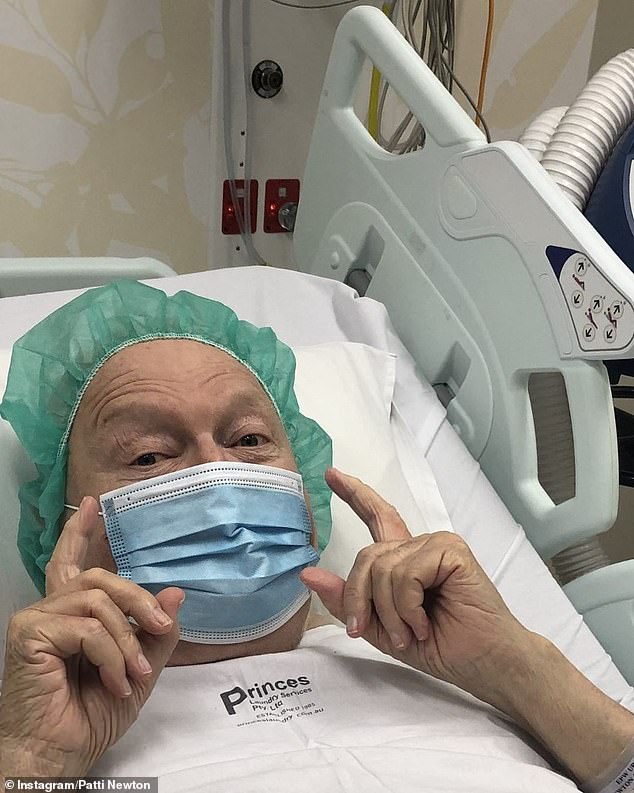 ‘Your whole system and just everything closes down really. That was all.’

Patti also hit out at cruel reports Bert was estranged from their son Matthew when he died.

The mother-of-two confirmed her 44-year old son would not return to Melbourne from his home in New York to attend the funeral of his TV legend father.

‘The press are just desperate to find a little glitch into (their relationship),’ Patti said. 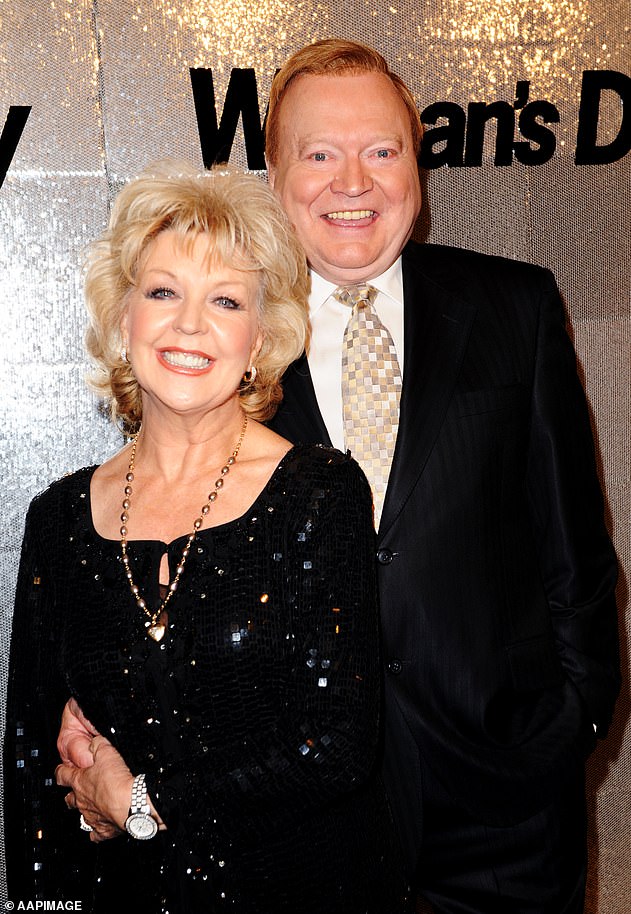 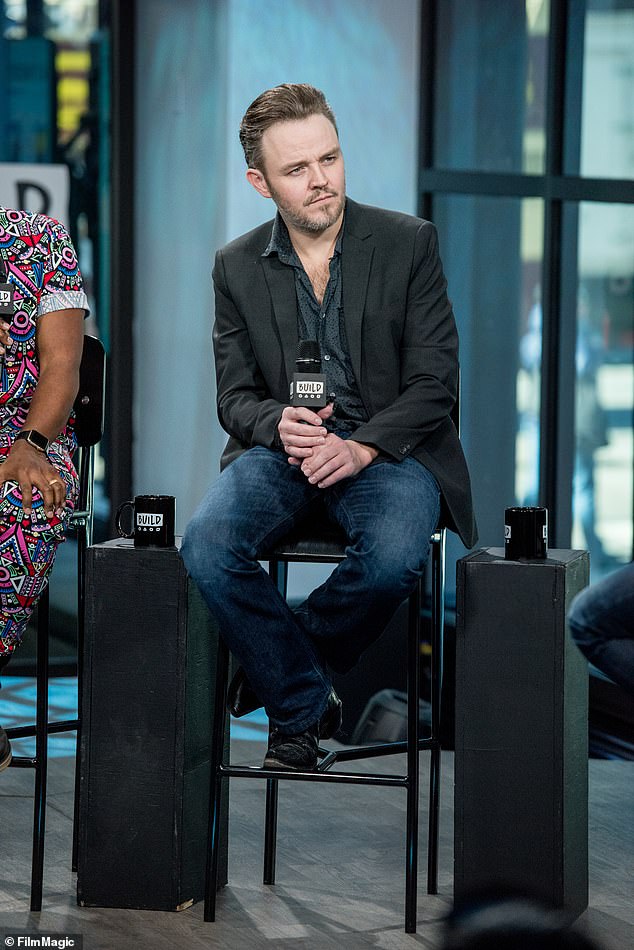 Matthew Newton in 2017. Little has been seen of him in recent years. His mum Patti has dismissed suggestions he had a rift with his famous father Bert

‘He won’t be coming. For no reason. I don’t know, I mean maybe he needs to put a statement out to stop everybody thinking that there’s a rift or something.’

Bert died aged 83 on Saturday after a well publicised battle with illness over recent months.

Such was his regard in his hometown of Melbourne, he will be farewelled in a state funeral in the coming days.

Patti lashed out at media reports that continue to suggest her son had been estranged from his father in the years before his death.

‘There was no rift. He’s had many long conversations with Bert in the hospital and that was all fine,’ she said.

The beloved singer, who is 76, said Matthew would be held-up by the Covid-19 pandemic, which continues to cause havoc across the United States. 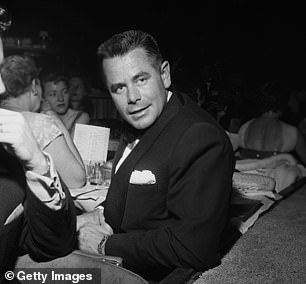 ‘It’s just the logistics of it all, and with Covid, and with everything else,’ she said.

Patti revealed Matthew was able to see his father regularly while he was alive via video calls.

‘But he didn’t personally, so I would find that a bit sad if the time that he saw him was when he wasn’t really alive.’

Patti said Matthew had spoken to Bert in his final days via video conference where they would discuss his famous father’s relationships with some of Hollywood’s hottest stars of his era.

‘He had the best conversations. They’re both into movies and things, so they talked about old movies and I think the height of the conversation was about Glenn Ford because Bert was the only one that Glenn Ford would speak to and Matthew had heard the story and he wanted to hear it again,’ she said.

Ford, known largely for his roles in famous Westerns of the era, had appeared alongside Bert at the Logies back in 1973.

‘The thing is Matthew and Bert were very talented in different areas,’ Patti said. 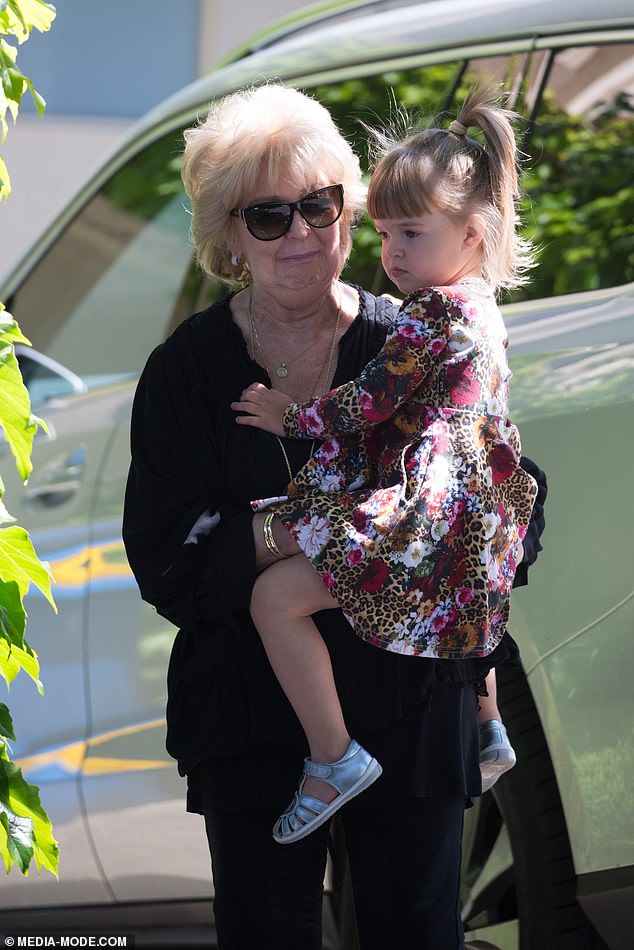 Speaking for the first time since the TV legend’s death, Patti said she was notified of his passing shortly after leaving his bedside 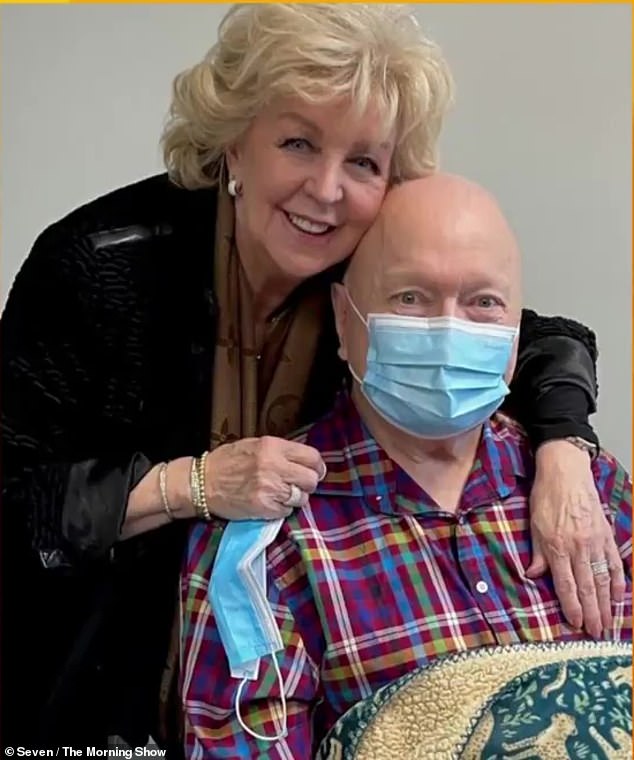 WHO IS MATTHEW NEWTON

Little has been seen of Matthew since he settled down in New York with Catherine Schneiderman following a series of scandals.

Matthew was also arrested twice in Miami, Florida, in 2012 – the first for trespassing and resisting officers, while a second incident saw him charged with battery and resisting arrest after he attacked a hotel receptionist.

Following the charges, Matthew checked into the Betty Ford Center in California for 90 days of alcohol and drug treatment.

He had starred in a range of successful Australian television shows before moving overseas.

Patti had just hung-up the phone from Matthew when she spoke to Daily Mail Australia from her home just outside of Melbourne’s CBD.

‘I’ve had so many conversations with him. We had a conversation last night and all the family were here. (The media) want to make it a rift, but there was no rift. There was never a rift with Bert,’ she said.

‘All that baloney about Matthew’s devastating childhood – I mean, I have two children, Lauren and Matthew both had the same childhood. They both had a wonderful childhood.’

Lauren and her two children were seen arriving at the family home to comfort Patti on Sunday.

‘Lauren was more placid and easier to get along with, but there was never any major dramas or anything,’ she said.

Patti said she and Bert had stood firmly behind Matthew during his darkest days in 2006 when he was charged over an assault on his then girlfriend Australian actresses Brooke Satchwell.

‘The major dramas were when Matthew was in Sydney and he had his major dramas, but it was really nothing to do with us and as most parents say: ‘you can only be there for your children’. And we’ve always been around,’ Patti said.

‘And Bert more than me really. He was always saying ‘have we spoken to Matthew, have we done enough and have we said enough’.’

Patti said she flew to Sydney to support Matthew during his various court appearances. 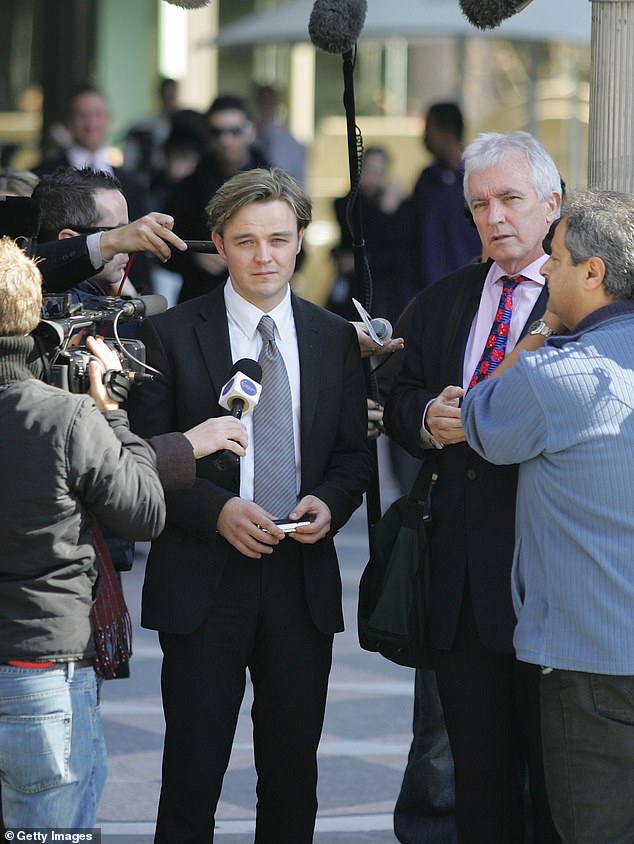 Matthew Newton and his lawyer Chris Murphy leave court after facing assault charges at the Downing Centre Local Court on June 12, 2007 in Sydney

She told Daily Mail Australia her family had been devastated by Bert’s passing despite his long battle with illness.

‘I just think it will be really sad if that’s what this is going to be all about. It’s about this wonderful life of Bert’s and how he fought so hard to be around and stay here – mainly because he loves his grand kids so much, but also because he loved what he did, he loved the industry and he loved having great friends,’ she said.

Patti said she had watched a tribute to her late husband on Channel 9 on Sunday night which flooded her with fond memories.

‘Even me as his wife, and having been with him for 50 years, I forget that he was so talented and had so many different avenues … that show was fabulous, the only sad bit was that Bert didn’t get to see it. He would have loved it more than anybody.’

‘We’re just trying to get through until the funeral is over and then we can all fall apart.’

Patti revealed Bert had loved to talk about the past as his illness slowly wore down his body.

‘All we ever talked about was the (Don) Lane show and the (Graham) Kennedy shows and things like the Logies … he loved all that, so to have all that time to reminisce was good,’ she said.

The TV personality is survived by his wife of 47 years Patti, his two children Lauren and Matthew, and six grandchildren 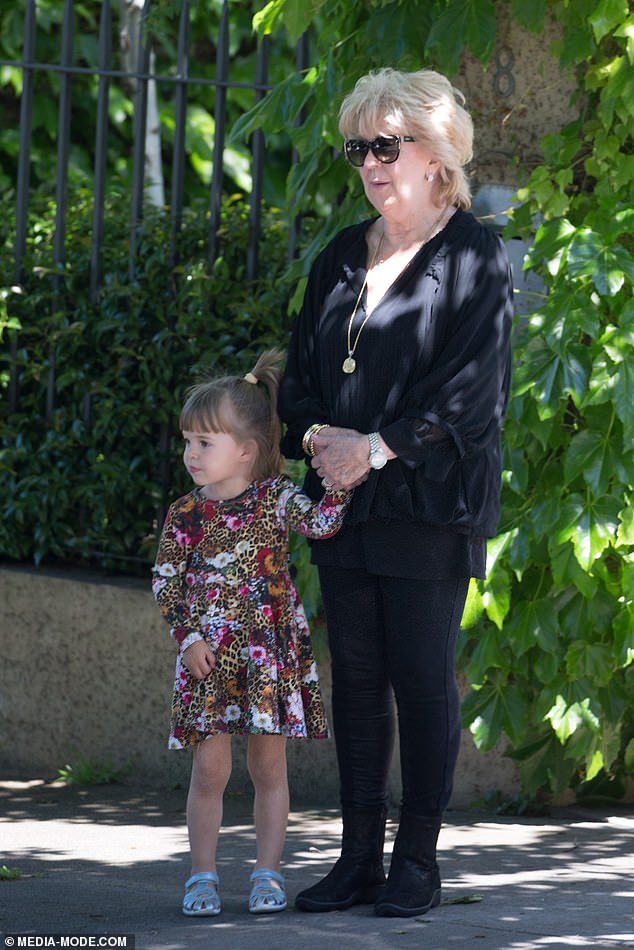 Patti Newton on Sunday with her grand daughter

Bert was hospitalised in March and underwent surgery on his leg in May.

He needed surgery after his toe became infected before Christmas.

The infection was ‘linked to his diabetes’ and was threatening his life with doctors telling him the surgery was a ‘life or death decision’.

Patti said Bert had every intention of coming home alive.

The couple had splashed out on renovating their home in anticipation of Bert moving into the garage where he could access recently installed bathroom facilities.

‘He had no intention of going. He wanted to stay around for a while,’ Patti said.

‘He fought it right to the end. When my mother was very ill, the doctor said to me ‘there are some people that won’t wear any make-up, they don’t want to know, they’re not interested in looking ahead or anything. And then there are others that want to plan a world trip’. He said: ‘with your mum you have a traveller on your hands’. And I had the same with Bert.’

Patti said Bert maintained his fighting spirit up until the very end.

He had been surrounded by family until just minutes before he took his last breath.

‘I feel that in being with him for that whole day that he wouldn’t have wanted me there for that.’

Patti said she held no regrets about the works she did on their home in anticipation of Bert’s return.

Victorian Premier Daniel Andrews announced the TV icon will be honoured with a state funeral, which will most likely be held at Bert’s ‘beloved’ St Pat’s Cathedral in Melbourne. 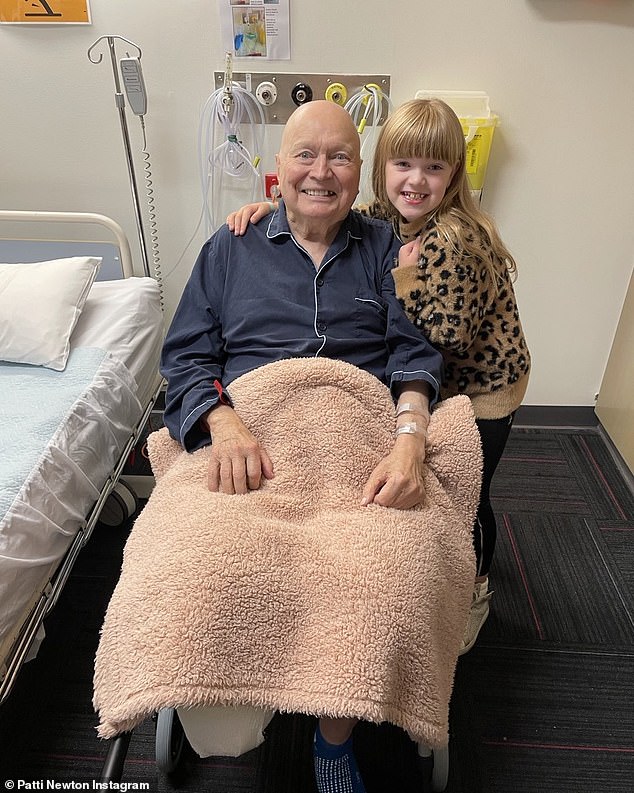 By his side: Bert pictured here in hospital with his granddaughter