There’s nowt so queer as folklore! People share the superstitions and legends famous in their local area from Cornish pasties bringing bad luck to ‘crossing’ soda bread in Ireland (but is YOURS on the list?)

By Monica Greep For Mailonline

Every community has strange traditions, customs and stories that pass down through generations.

And those who have embraced their local legends have shared the various myths and legends famous in their hometown, using #FolkloreThursday on Twitter.

The folktales range from spoon-stirred porridge bringing bad luck in Scotland to the ghost of a witch living in a hollowed out tree in the Midlands and bad fortune after eating an entire Cornish pasty.

Another old Irish tradition suggests the cross on the top of soda bread is to let fairies out of the bread while it rises, while in Cornwall a famous tale involves giants roaming the moors to create their famous granite tor on Stowes hill. 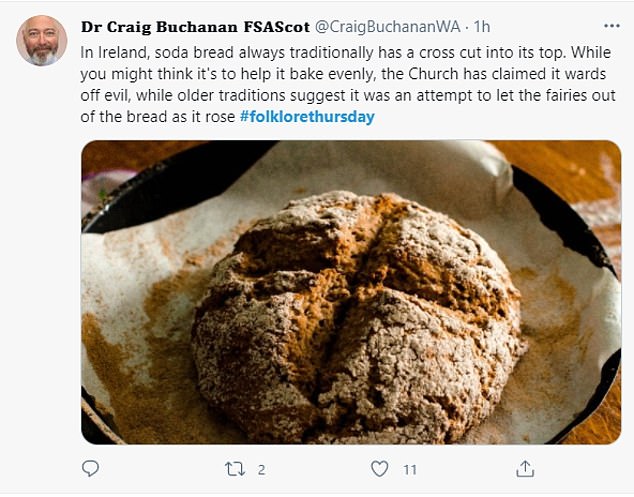 One Scottish user wrote: ‘Porridge stirred with a spurtle which has a ring of wood around it will never stick. Porridge must always be stirred clockwise.’

A user from the Midlands told the story of a murdered woman yet to be identified after her remains were found in 1943 by four children inside an elm tree in Hagley Wood.

A year later, graffiti appeared on the nearby Wychbury Monument reading: ‘Who put Bella in the Wych Elm?’ – prompting locals to speculate that the girl inside could have been a mythical being.

She wrote: ‘Here in the Midlands. During WW2 a female skeleton was discovered in a hollowed out tree by local children. She was nicknamed named Bella. Today mystery & folklore surround her. Who was “Bella”? Was she a witch? A victim of human sacrifice? A Spy? Fascinating.’

The folktales include; spoon-stirred porridge bringing bad luck in Scotland and the ghost of a witch living in a hollowed out tree in the Midlands

An Irish user explained that soda bread always traditionally has a cross cut into its top, but it’s not to help it bake evenly. He claimed the Church once said that the cross was a way of warding off evil, while older traditions suggest it was an attempt to ‘let the fairies out of the bread as it rose’.

Another Twitter user wrote: ‘In Cornish mines it was unlucky to eat the whole of a Cornish pasty. You should instead leave the crust for the Knockers, who were mischievous spirits.

‘Practically this was so miners didn’t eat the crust “handle” of the pasty which got dirty from their hands.’

Another Cornish folktale tells the story of The Cheesewring, a famous landmark in Stowe’s Hill in the parish of Linkinhorne. The Twitter user explained: ‘Cornwall’s biggest and strongest giants roamed the moors. They were challenged to a rock throwing contest with a saint. The granite slabs were piled high forming The Cheesewring.’

Another folklore fanatic wrote: ‘The village of Cheddar in Somerset is, of course, most famous for its cheese! According to legend, a milkmaid forgot her milk pail in one of the Cheddar caves and when she returned, she found it had transformed into the golden cheese we know and love today.’

And a Scottish user added: An ancient Scottish tradition was for a bride, before entering her new husband’s home, to have a currant bun broken over her head on the doorstep by the groom’s closest female relative.

‘This ritual was a wheat blessing to bring fertility and prosperity.’