Peter Egan has revealed his wife of 45 years, actress Myra Frances, has passed away.

The screen star, 74, took to Twitter on Wednesday to share the tragic news about his ‘friend and soulmate’, admitting: ‘My heart is broken’.

The grieving actor said: ‘This is the saddest post I will ever have to make. My wonderful wife Myra, my friend & soulmate lost her battle with cancer at 1.30am on Tuesday.

‘This message is for all her followers on her FB & Twitter ⁦@EganMyra.⁩ She was the most amazing human being. My heart is broken.’ 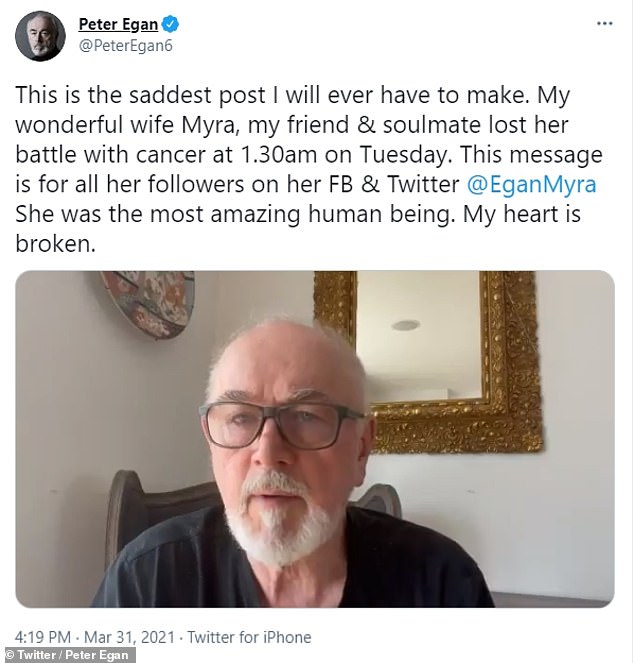 ‘My heart is broken’: Peter Egan has revealed his wife of 45 years, actress Myra Frances, passed away on Tuesday

Peter also recorded an emotional video revealing he’d be taking a break from social media as he came to terms with his wife’s tragic death.

He said: ‘Hi everyone this is probably the hardest video I’ll ever have to make.

‘I’ve been absent from social media quite a lot recently, people asking why and indeed so is my wonderful wife of 49 years Myra, who like me has been a very active campaigner for a long time for all of the animals of the world that we care about.

‘I’m finding it very difficult to say that my wonderful wife died of cancer in the early hours of Tuesday morning at 1.30am, and I’m absolutely devastated and it’s very hard to think straight at the moment.

‘But I wanted to share this message with her followers and all of my followers just to say that I’ll be taking a break from social media while I get myself together and while I arrange things for my wonderful wife Myra. 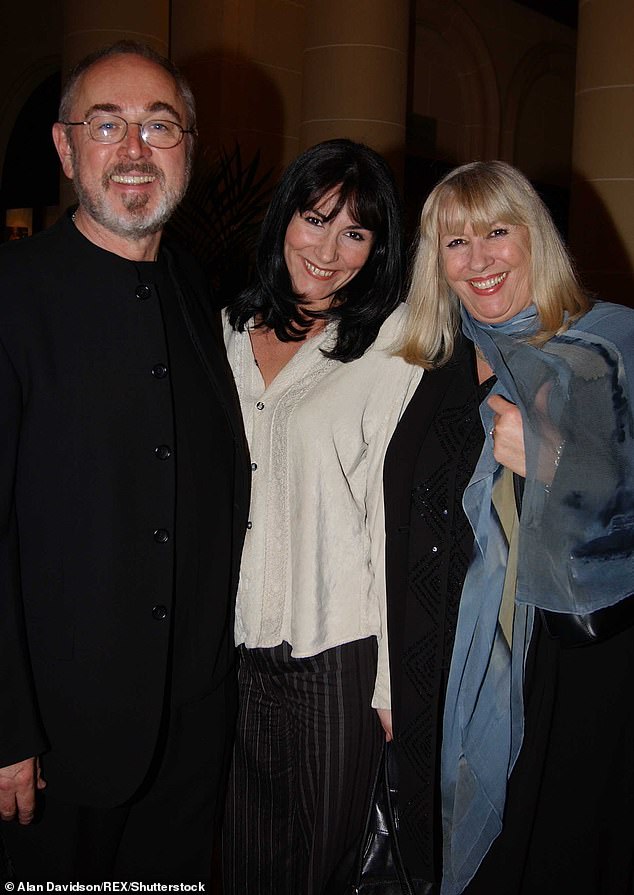 Moving: The actor took to Twitter on Wednesday to share the tragic news about his ‘friend and soulmate’, saying: ‘My heart is broken’ (pictured with their daughter Rebecca in 2003) 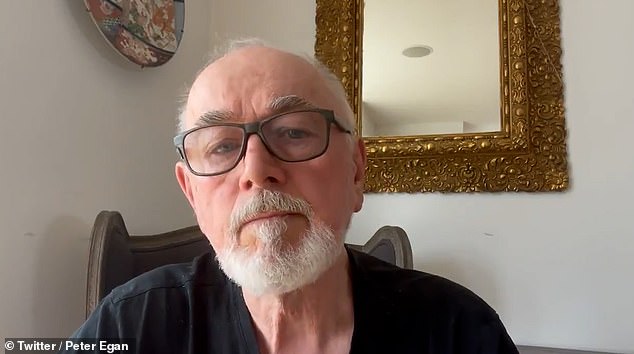 Sad: Peter also recorded an emotional video revealing he’d be taking a break from social media as he came to terms with his wife’s tragic death

‘She was the most amazing woman I’ve ever met, I miss her desperately and I will make a clearer announcement about this later and I will carry on my campaigning because she was the person who taught me to be human, to be compassionate to be kind and empathetic. Goodbye for now, and please everyone be kind.’

Peter met fellow thespian Myra in 1972 when they were both in TV drama The Organization, and they married four years later.

The couple moved from London into their Surrey home in 2016 with their five rescue dogs, and have both campaigned tirelessly for animal welfare. 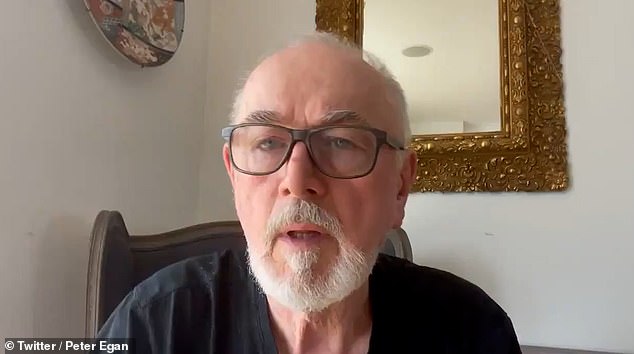 Touching: He said: ‘I miss her desperately… and I will carry on my campaigning because she was the person who taught me to be human

While Peter has had a slew of acting roles in series including Downton Abbey, Hold the Sunset and Afterlife, Myra had been retired for many years.

In an interview with the MailOnline back in 2019, Peter said the most prized possession in his living room was a framed photo of their wedding reception, which took place in 1976.

He said at the time: ‘This photo was taken at our wedding reception in Surrey on Friday 13 February 1976 – fortunately neither of us is superstitious.’ 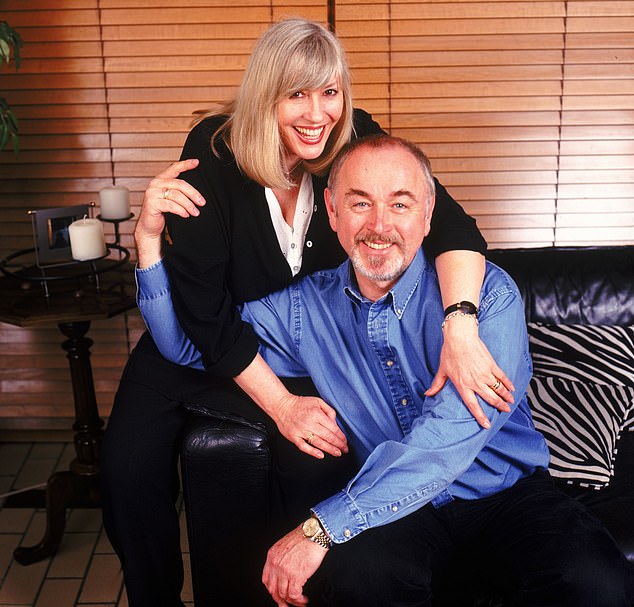 Tragic: Peter met fellow thespian Myra in 1972 when they were both in TV drama The Organization (pictured together in 1999) 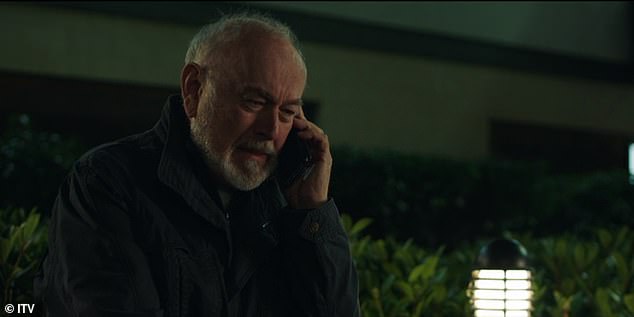 TV star: Peter most recently starred in ITV’s Unforgotten, which saw its fourth series come to an end on Monday night

It comes after Peter appeared in Unforgotten’s heartbreaking series finale on Monday night, before ITV confirmed that show would return for a fifth season.

‘Sobbing’ fans watched as DCI Cassie Stuart (Nicola Walker) lost her fight for life after sustaining fatal injuries in a car crash at the end of the previous episode.

‘Torn to pieces,’ one Twitter user wrote. ‘What heartbreaking TV.’

The departure prompted fans and critics alike to question whether this might be the end of Chris Lang’s crime drama – but ITV has now confirmed the show will return with Sanjeev Bhaskar, who plays DI Sunny Khan, as the lead. 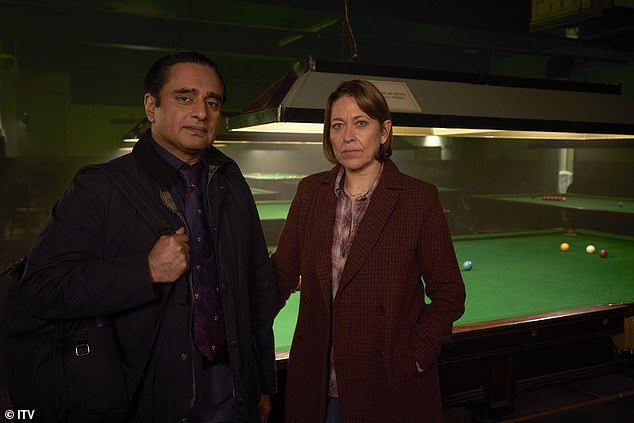 Devastating: It comes after Unforgotten’s heartbreaking series finale aired on Monday night, before ITV confirmed that show would return for a fifth season 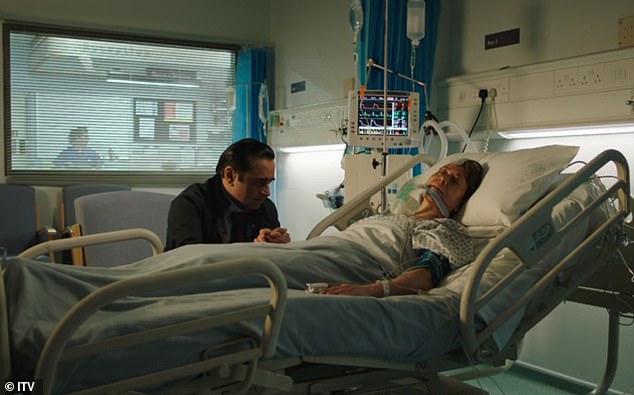 RIP: ‘Sobbing’ fans watched as DCI Cassie Stuart (Nicola Walker) lost her fight for life after sustaining fatal injuries in a car crash at the end of the previous episode 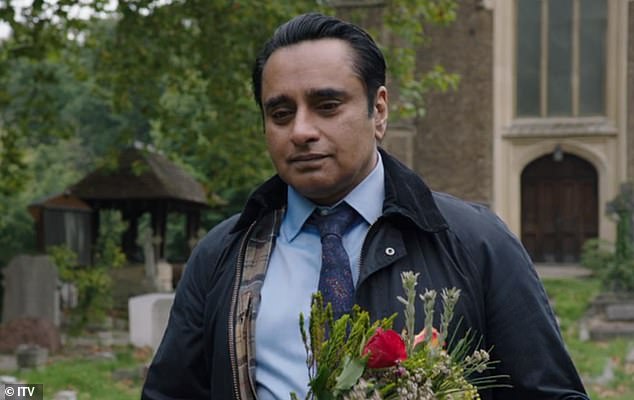 A statement read: ‘ITV would like to thank Nicola Walker for playing the brilliant role of Cassie Stuart in four series of Unforgotten which has become one of the best loved and most critically acclaimed police dramas on TV.

‘Nicola and writer Chris Lang decided that Cassie’s story would come to an end last night, but that Unforgotten would continue, in series 5, with a new case, and a new “Partner in Crime” for DI Sunny Khan.’

Series five, which focused on the 1990 murder of Matthew Walsh, has been a ‘record-breaking’ season for Unforgotten.

Episodes 1-5 attracted an average of 7.5million viewers based on seven day consolidated data, which is up by 1.6million viewers and 26 per cent on the last series.

The identity of Matthew Walsh’s killer was also revealed, thanks to the tireless work of DI Khan and the team who continued with their investigation in the wake of DCI Stuart’s accident.

‘If there’s one thing I can be sure she’d want us to be doing right now is carrying on with our jobs,’ Khan told the deflated team. ‘And doing everything we can to find Matthew’s killer. And as ever, I can see no good reason to go against her wishes.’

Although the most obvious murder suspect was detective Ram Sidhu (Phaldut Sharma), it emerged Dean Barton (Andy Nyman) was actually the man responsible.

He had stabbed Matthew Walsh in the allotment back in 1990 as revenge for the gangland death of his beloved older brother.

Channelling his boss, DI Khan was able to piece together the hitherto unnoticed connection between the two men. They had both been born into families with criminal ties and lived just streets away from each other.

Walsh had killed Dean’s brother, and in turn Dean stabbed him with the fountain pen given to him by his slain brother shortly before his death.

Nicola had put a handwritten note and a framed photograph in his character DI Sunny Khan’s prop bag.

Sharing a photo of the message on Twitter, Bhaskar wrote: ‘The last of this series #sunnysbackpack was unbeknownst to me, packed by #NicolaWalker – with a note she wrote, when I opened it on set. I cracked.’ 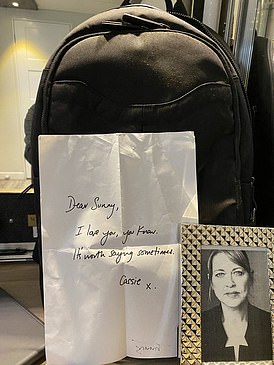 He then convinced the rest of the gang, Sidhu, Fiona Grayson (Liz White) and Liz Baildon (Susan Lynch), it had all been a mistake.

All four members of the group were arrested on various charges. Fiona and Liz got off relatively lightly, while Sidhu faced charges for assisting Barton in the international drug smuggling operation that was touched upon earlier in the series.

All feelings of triumph were soon dwarfed by the death of DCI Stuart.

Her family was brought into a dimly-lit hospital waiting room to be given the devastating news.

‘We knew from our scans she’d had a bleed on her brain,’ the doctor said softly, ‘but when we opened her up it was much worse than we had feared… Someone with that level of damage is, I’m so sorry to say, very unlikely to recover brain function.’

At the same time a jubilant DI Khan was on his way to the hospital to deliver the good news about the case to his boss.

But when he arrived he found Cassie’s boyfriend DCI John Bentley (Alistair MacKenzie) sitting in the corridor alone. ‘No,’ he said, stopping short.

Outside Martin wept on a hospital bench as he listened to the voice message Cassie had left just moments before the crash, in which she apologised to him and told him she loved him.

‘This job has drained me,’ she said. ‘But it’s ten-and-a-bit more weeks and then I’m done. And then I hope we can get back to normal…

‘I will be better, I promise. Then for however many years we will have together, we will try and get back to normal.’

Sobbing, Martin put his phone back up to his ear to listen to the message again.

The final lines of the episode were given to DI Khan, whose eulogy was played over a moving sequence showing him laying flowers at her grave.

‘People like Cass Stuart are extraordinary,’ he said. ‘So we can be sad we lost someone we adored. And who we will miss every day.

‘But we can also be grateful for the time we did have with her, and the impact she had on all our lives. 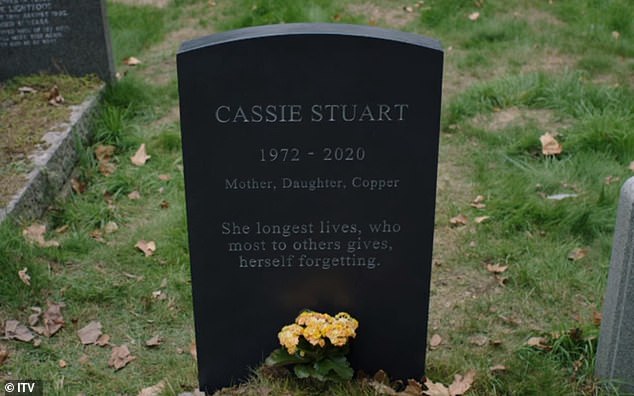 The final lines of the episode were given to DI Khan, whose eulogy was played over a moving sequence showing him laying flowers at her grave