As every dog owner knows, watching your faithful pal bounding in the fresh air is one of life’s great and simple pleasures. For me though — and I’m not alone in this — it has become tainted by the fear they might hurt themselves on a piece of metal or broken glass left behind by some selfish litter-lout.

This week, the RSPCA backed the Great British Spring Clean following thousands of reports of wild animals trapped in litter. But as I know only too well, our pets are also at risk from this scourge of the countryside and the charity Paws on Plastic, which encourages dog owners to work together to make dog walking safe again, has been inundated with stories of dogs who’ve come to harm due to the selfish behaviour of others.

Even discarded food can be a menace, as we discovered when our three-year-old Spinone Angela developed swelling in her neck after a walk last year. The vet said the culprit was most likely a cooked chicken bone — something I’d never let her eat as I know how dangerous they are for dogs, because they splinter. 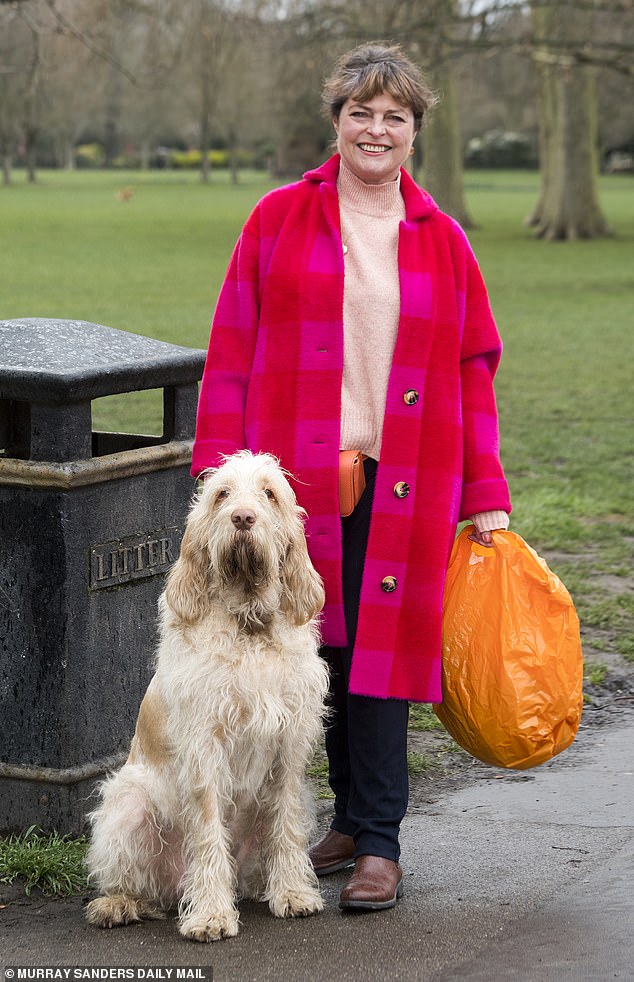 The vet said the culprit was most likely a cooked chicken bone — something I’d never let her eat as I know how dangerous they are for dogs, because they splinter. (Janet Ellis with her Italian Spinone Angela)

I suspect she found the remains of a takeaway on a walk and ate it when my back was turned. She needed antibiotics and seemed uncomfortable for a week.

These days, with everyone seeming to care about the environment, you’d hope there’d be less litter.

Instead, there seems to be more if the trail of packets, bottles and wrappers I find are anything to go by. Too many people fail to grasp that caring about the planet starts with them. Dog walks should be pleasurable, not dangerous.

Our first dog, Nancy, another beautiful Italian Spinone, had an injury as she played on a riverbank near our London home. It was low tide and the ring-pull from a can, which had been chucked instead of binned, had wedged itself in the riverbed at the right angle to slice through Nancy’s front paw.

I only realised when I saw a trail of blood behind her. Two months of vet trips followed — she needed antibiotics; the dressing had to be regularly changed and her paw re-bandaged; somehow that wound had to be kept dry, no small undertaking with our weather.

All that because some selfish person couldn’t be bothered to pick up after themselves.

There was a time when I’d spot someone dropping litter and chase after them with it. I’d be polite when I caught up with them, saying: ‘Oh dear, you dropped this’ as I handed it over. They’d thank me, making out they hadn’t realised they’d done it. But they knew, and I knew, what had gone on.

That stopped when my kids hit their teens and they worried someone could turn nasty. And so now I fume quietly as I pick up after those who ought to know better.

How It Was by Janet Ellis is published by Two Roads and available at Waterstones, £8.99. 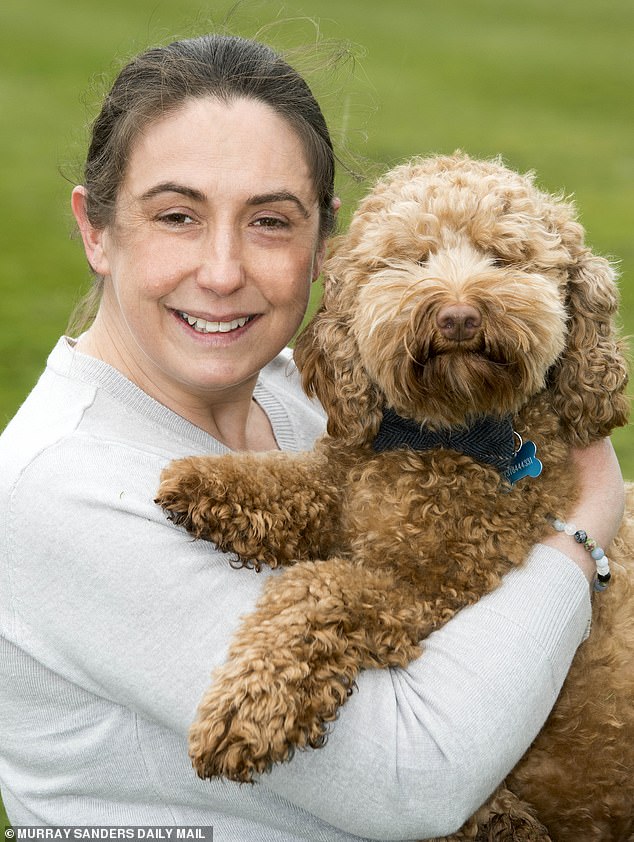 The bill topped £2,800 and even now, one year later, Snooba still isn’t right. His stomach gurgles and he burps when he’s eating. He’s also developed a phobia of vets

Angela Harding, 43, is a full-time mum who lives in Portland, Dorset, with her son Alden, nine, and their two-year-old Australian labradoodle, Snooba. Angela says:

We live by the sea and, last Easter, the hordes of crowds descended.

The rubbish was bursting out of the bins in the National Trust car park near our home and I wasn’t quick enough to stop our dog, Snooba, grabbing what looked like a plastic sandwich bag from the floor. He swallowed it before I could wrench it out of his mouth.

I was relieved when he passed it the next day, but he went off his food and became mopey, crying to be let out every ten minutes, and then, he started passing blood. We took him to the vet and when an X-ray couldn’t locate the blockage, Snooba stayed in for surgery.

Nothing could have prepared us for what we saw when we collected him. I was expecting a small scar, but he had a wound the length of his body, held together with 20 staples. There had been a piece of silver foil in the sandwich bag which had shredded the lining of Snooba’s gut as it passed through.

The next two weeks were a nightmare. I slept on an air bed with him to stop him jumping or pulling at the wound, and he cried all day and most of the night. He was only comforted if I held his paw, or if we put David Attenborough on the TV.

Luckily, I’d been furloughed so I could spend time with him. Each day we had to make him swallow eight tablets (anti-sickness, antibiotics, antacids) and carry him up and down the stairs to our flat so he could go to the toilet.

I spent much of that time furious with the people leaving their litter in the car park, and with the council for not emptying the bins regularly. Before this lockdown, Alden and I would go litter picking, but it feels like a drop in the ocean.

The bill topped £2,800 and even now, one year later, Snooba still isn’t right. His stomach gurgles and he burps when he’s eating. He’s also developed a phobia of vets.

Unfortunately, he hasn’t learned his lesson and still scavenges around bins if he gets the chance, so I have to be careful. 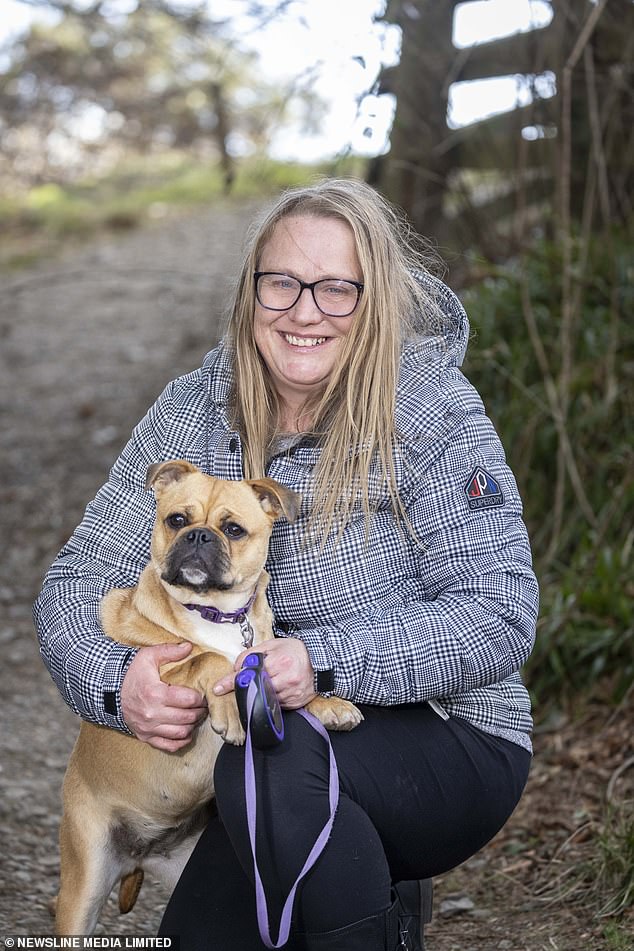 Nala normally keeps away from the rubbish-strewn areas but, last October, when she was just five months old, she was running around with another dog and she must have stepped on some broken glass

Ally Cummins, 50, is a pupil support assistant at a school close to her home in Stonehaven, near Aberdeen. She and her husband, Timothy, also 50, have two grown up children and their year-old pug/bulldog cross, Nala.

The beautiful wooded areas where we walk our dog are unfortunately popular with some irresponsible teenagers who hang out there in the evenings.

I take Nala on a walk along the river near that area every day and I always come back with two carrier bags full of drinks cans, food packaging, cigarette ends and broken bottles.

Nala normally keeps away from the rubbish-strewn areas but, last October, when she was just five months old, she was running around with another dog and she must have stepped on some broken glass.

We noticed the blood first, then we saw the chunk of glass embedded in her paw.

I took her straight to the vet, who stitched the wound. Poor little thing had to wear a cone for ten days. The vet bill was £200.

Nala is thankfully fully recovered now, but it does still make me angry. It’s so thoughtless.

PPE could have killed my husky 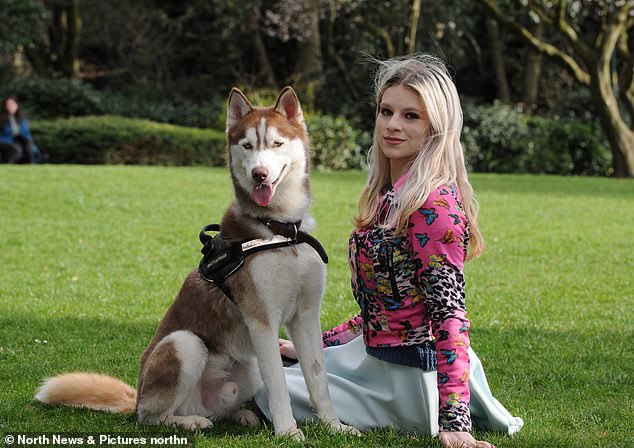 In January, Mylo grabbed a mask and wouldn’t let it go. Other dog walkers came to help and four of us tugged at it, but we only managed to pull off one of the strings before he swallowed it

Louise McCoy, 25, lives in Gateshead, Tyne and Wear, with her three-year-old daughter, Alyxandria and her rescue husky, Mylo, one.

Discarded PPE is a big problem in the park where I walk my dog. There are masks and gloves on the paths and in the bushes.

In January, Mylo grabbed a mask and wouldn’t let it go. Other dog walkers came to help and four of us tugged at it, but we only managed to pull off one of the strings before he swallowed it.

I was scared the metal strip that goes over your nose could pierce his gut, or the string would strangle his intestines. I’m lucky we live near an animal hospital run by the charity PDSA.

The vet said surgery was probable but that he’d like to try an injection to make Mylo vomit. It worked and the mask emerged intact, but it seems Mylo may have gut problems. He’s off his food, and I have to feed him probiotic paste to improve his energy.

I get angry with people who throw their PPE on the floor. If Mylo was off the lead, I wouldn’t have known what he swallowed and may have got to the vet too late. I’ve upped my litter picking, and grab as many masks and gloves as I can — at least ten every day.

I saw a trail of blood in the snow 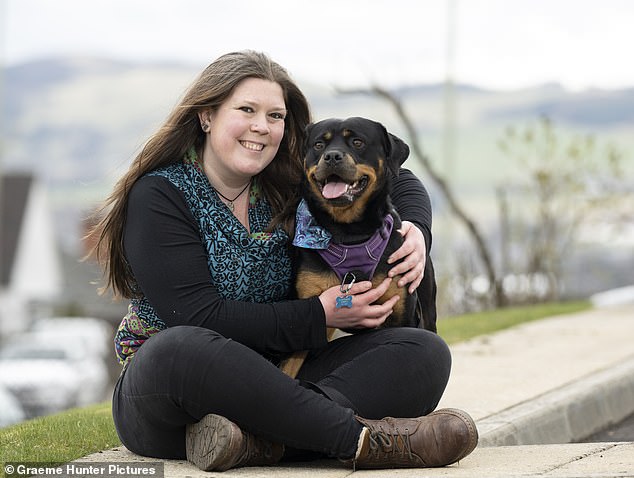 When I got home, one of Coco’s paws was bleeding so much I phoned the emergency vet and was told to apply a pressure bandage overnight

Amy Bastow, 29, works as a dog trainer. She lives in Perth, Scotland, with her partner Sam and their four-year-old rescue rottweiler, Coco.

Most evenings, I take Coco for a run in the park before bed. The night she was injured there was snow on the ground, so I couldn’t see what was underneath and I was horrified when there was blood splattered everywhere.

When I got home, one of Coco’s paws was bleeding so much I phoned the emergency vet and was told to apply a pressure bandage overnight. At the vet the next day, we found out she’d nicked a blood vessel and needed surgery.

The cut, about 5 cm up from her front paw, was deep. For the next three weeks, Coco couldn’t go for walks. She had to take antibiotics and painkillers and she skulked around the home in her cone of shame, thoroughly miserable.

She became clingy and insisted on joining us in bed — it was a tight squeeze! When the snow thawed I went to the park and spotted metal cans and broken glass where we’d been walking. It makes me angry to see litter. I’m a keen member of the local Paws on Plastic group and we pick up as much as we can. But we don’t go to that park now.

The vet bill was £450 — luckily I’m insured — but we had to pay the excess. If people didn’t drop litter it wouldn’t have happened.