Pregnant women who drink even just a moderate amount of caffeine risk giving birth to a small baby, US researchers reveal.

Expectant women who consumed the caffeine equivalent of as little as half a cup of coffee a day on average had slightly smaller babies than pregnant women who did not consume caffeinated beverages, they found.

The experts advise pregnant women to steer clear completely from caffeinated beverages such as coffee, tea and fizzy energy drinks like Red Bull. 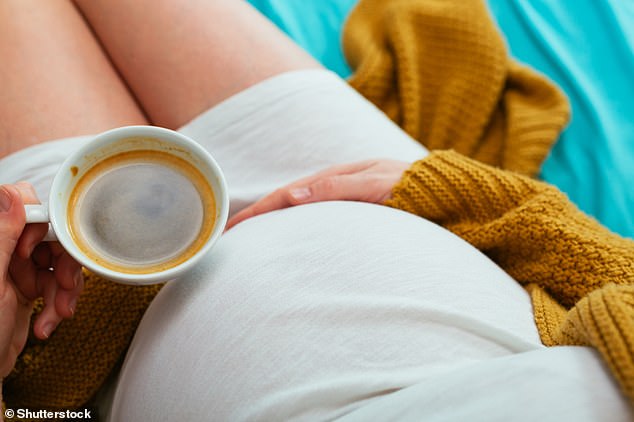 Even moderate daily caffeine intake during pregnancy may lead to giving birth to a smaller baby, the new US study reveals

How much caffeine is in your drink or snack – and what does the NHS say about its risks?

The NHS advises pregnant women to limit their daily intake of caffeine to 200 milligrams, which is roughly equivalent to two mugs of instant coffee.

The health service’s website warns: ‘High levels of caffeine in pregnancy can result in babies having a low birthweight, which can increase the risk of health problems in later life. Too much caffeine can also cause a miscarriage.’

It also offers a guide to the average amount of caffeine in products:

One mug of instant coffee: 100mg

One mug of filter coffee: 140mg

The NHS says pregnant women can drink caffeine, but no more than 200 milligrams (mg) per day, which is about the caffeine you’d get in two mugs of instant coffee.

But the team found reductions in size and lean body mass for infants whose mothers consumed below this amount.

Caffeine is believed to cause blood vessels in the uterus and placenta to constrict, which could reduce the blood supply to the fetus and inhibit growth.

The researchers were led by Katherine L. Grantz at the US’s Eunice Kennedy Shriver National Institute of Child Health and Human Development.

‘Until we learn more, our results suggest it might be prudent to limit or forego caffeine-containing beverages during pregnancy,’ Dr Grantz said.

‘It’s also a good idea for women to consult their physicians about caffeine consumption during pregnancy.’

Previous studies have linked high caffeine consumption (more than 200 mg of caffeine per day) during pregnancy to infants being small for their gestational age (at a particular stage of the pregnancy).

High caffeine intake has also been linked to the risk of intrauterine growth restriction (IUGR) – when the fetus does not grow as expected – in a previous study.

However, studies on moderate daily caffeine consumption (200 mg or less) during pregnancy have produced mixed results.

Some have found similar elevated risks for low birth weight and other poor birth outcomes, while others have found no such links.

The current study authors noted that many of the earlier studies did not account for other factors that could influence infant birth size, such as variation in caffeine content of different beverages and maternal smoking during pregnancy.

For their study, the authors analysed data on more than 2,000 racially and ethnically diverse women at 12 clinical sites who were enrolled from 8 to 13 weeks of pregnancy.

The women were non-smokers and did not have any health problems before pregnancy.

From weeks 10 to 13 of pregnancy, the women provided a blood sample that was later analysed for caffeine and paraxanthine, a compound produced when caffeine is broken down in the body.

They also reported their daily consumption of caffeinated beverages (coffee, tea, soda and energy drinks) for the past week – once when they enrolled and periodically throughout their pregnancies.

Based on the women’s own estimates of the beverages they drank, those who consumed about 50 mg of caffeine a day (equal to a half cup of coffee) had infants 66 grams (about 2.3 ounces) lighter than infants born to non-caffeine consumers.

‘Our results suggest that caffeine consumption during pregnancy, even at levels much lower than the recommended 200 mg per day of caffeine may be associated with decreased fetal growth,’ the team say in their paper, published in JAMA Network Open.

Last August, experts concluded that pregnant women should avoid caffeine altogether for the sake of their baby’s health. 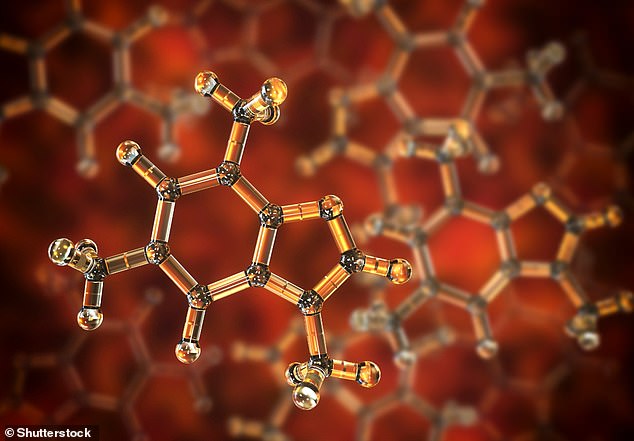 3D illustration of a caffeine molecule. Caffeine consumption during pregnancy has been an ongoing topic of debate

Based on 48 studies over 20 years, their research, by a professor at Reykjavik University in Iceland, concluded that even minimal caffeine intake raised the risk of miscarriage, stillbirth or low birth weight.

Just like the NHS, the Royal College of Obstetricians and Gynaecologists (RCOG) says pregnant women should consume no more than 200mg a day – and it insisted it would not change this advice based on the study.

‘Other – and potentially more reliable – research has found that pregnant women do not need to cut caffeine out entirely because these risks are extremely small, even if the recommended caffeine limits are exceeded,’ said Dr Daghni Rajasingam, RCOG spokesman, at the time.

Dr Luke Grzeskowiak, of the University of Adelaide in Australia, who was also not involved with the research, added: ‘The author’s conclusion that all pregnant women and women contemplating pregnancy should avoid caffeine is overly alarmist and inconsistent with the evidence.’

Just one cup of coffee a day during pregnancy may raise the risk of stillbirth, research suggests

Just one daily cup of coffee during pregnancy may raise the risk of stillbirth, research published in 2020 suggests.

The British study of more than 1,000 pregnant women, including 290 who had a stillbirth, looked at daily caffeine intake.

Every 100mg of caffeine per day during pregnancy – the equivalent of one mug of filter coffee – was linked to a 27 per cent higher risk of a stillbirth.

Caffeine is believed to constrict the blood vessels of the placenta, which can reduce the oxygen reaching an unborn baby.

Babies in the womb clear caffeine about a third as fast as their mothers, and it can result in an irregular heartbeat.

Professor Alexander Heazell, first author of the study and Director of Tommy’s Maternal and Fetal Health Research Centre at Manchester University, said: ‘This is a relatively small risk, so people shouldn’t be worried about the occasional cup of coffee.

‘But our study has found even a fairly small amount of daily caffeine is linked to a greater risk of stillbirth.’