Public concern about coronavirus has fallen sharply in the past month in a sign that the nation’s mood towards the disease is changing as the vaccination drive continues.

A new survey conducted by Ipsos MORI revealed 49 per cent of people view Covid-19 as one of the biggest issues facing the UK.

But that number is down 23 per cent on what was recorded in February – the first significant drop in levels of concern about the disease since June 2020.

The polling firm said the figures suggested the ‘public may feel the end of the pandemic is in sight’.

However, despite the fall in concern levels, coronavirus still ranks as the biggest issue facing the UK, above other things like Brexit, education and housing. 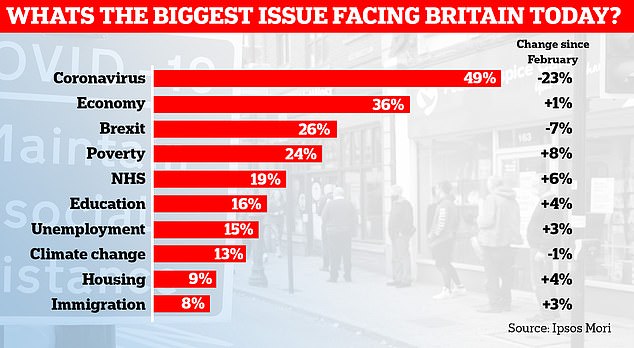 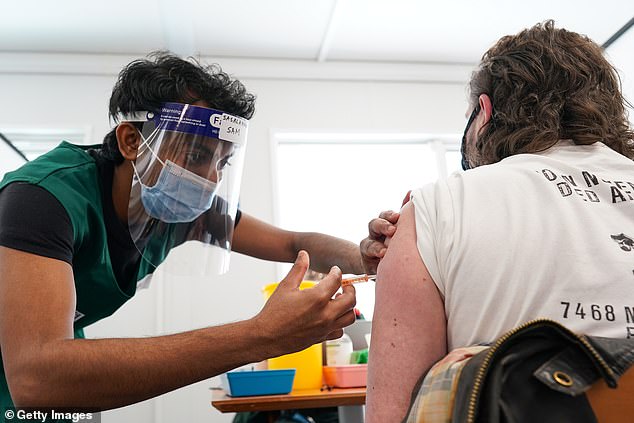 A patient is vaccinated as he attends the Riverside Stadium Vaccination Centre on March 22, 2021 in Middlesbrough, England 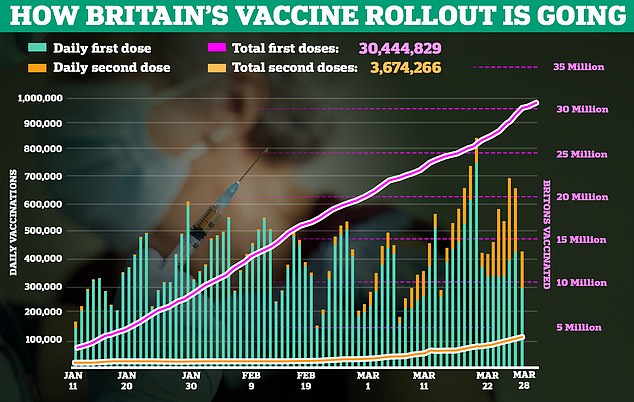 February’s edition of the Ipsos MORI Issues Index revealed that 72 per cent of people named the coronavirus as a big issue for the country.

That number fell to 49 per cent in March while one third (34 per cent) said they viewed the pandemic as the single biggest issue for the UK, down from 57 per cent last month.

The numbers also showed there is an age split on how the disease is viewed with older and younger Britons now less concerned than those in the middle age brackets.

Ipsos MORI said: ‘The proportion mentioning the pandemic as an issue stands at 44 per cent among 18-34s, 59 per cent among 35-54 year olds, and 43 per cent among the over 55s. By contrast, in February these figures were 70 per cent, 76 per cent and 72 per cent respectively.

‘Those aged 65 and over are among the least likely to mention the pandemic as a big issue; 39 per cent do so, meaning it is their joint-top concern alongside the economy (also 39 per cent).’

Away from coronavirus, the poll showed that concern about Brexit has also fallen with one quarter now mentioning it as a worry (26 per cent), down from 33 per cent in February, 35 per cent in January, and 60 per cent in December.

However, there have been some increases in the proportion of the public who are worried about other issues like the NHS, education and housing.

The survey showed there has been an eight per cent increase in mentions of the NHS as a big concern, with 24 per cent of respondents mentioning the issue.

Mike Clemence, associate research director at Ipsos MORI, said: ‘This month’s issues index suggests the public may feel the end of the pandemic is in sight. While half still see Covid-19 as a big issue for the country, this is significantly lower than last month, when three quarters felt the same way.

‘Concern is notably lower among older age groups, which may suggest the vaccination campaign is having an impact on public perceptions – although worries are also lower among the youngest Britons who will not yet have been vaccinated.

‘Yet as concern about Covid falls we also see other worries begin to rise. We have recorded significant increases this month in worries about the NHS, poverty, education and housing.’