By Mark Nicol Defence Editor For The Daily Mail

A senior RAF officer has raised concerns about pilot safety just days after a Hawk jet crashed in Cornwall.

The squadron leader claims exhausted, ‘emotionally distressed’ instructors are flying too many hours while trainees are flying solo before they are ready.

He fears a fatal crash is inevitable unless serious issues at a flying school for Britain’s next generation of military ‘Top Guns’ are addressed. 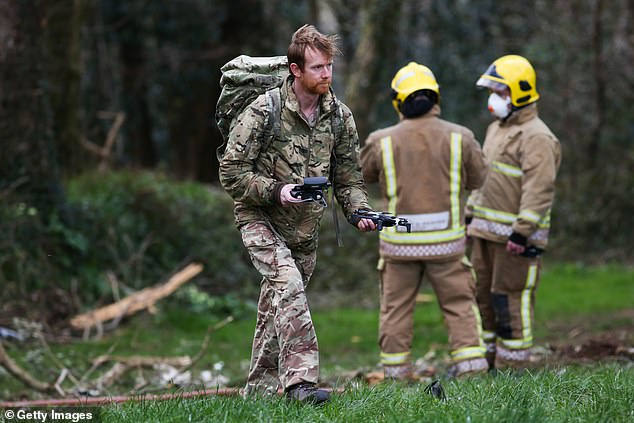 A senior RAF officer has raised concerns about pilot safety just days after a Hawk jet crashed in Cornwall (pictured, RAF personnel at the scene of the crash)

The officer also revealed there was a chronic shortage of aircraft, safety guidelines are being ignored and fed-up pilots are threatening to quit.

The claims – in a bombshell document obtained by the Daily Mail – come after two pilots were forced to eject from a Royal Navy jet before it burst into flames last Friday.

The crash prompted the senior instructor from 72 (Fighter) Squadron based at RAF Valley in North Wales to turn whistleblower.

He told top brass: ‘I am gravely concerned for the flight safety and personal wellbeing of members of 72 (F) Squadron.’ He predicted accidents caused through fatigue or a lack of recent practice.

The RAF said it was addressing the issues raised by the officer.

His squadron is responsible for delivering Basic Fast Jet Training (BFJT) to RAF and Royal Navy pilots who will go on to fly state-of-the-art F-35 and Tempest aircraft stationed on Britain’s new aircraft carriers, HMS Queen Elizabeth and HMS Prince of Wales. 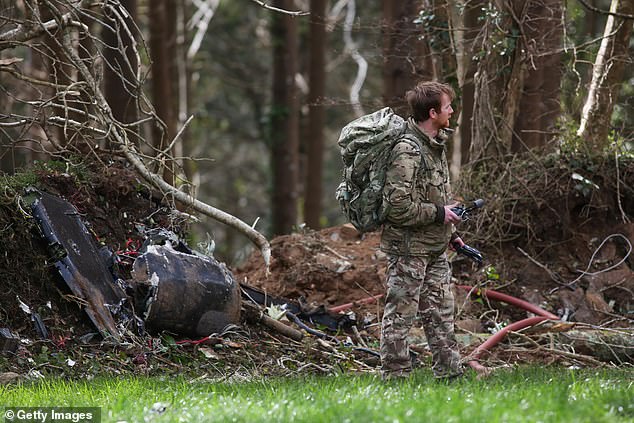 The officer added: ‘I think we are days away from several staff being unable to continue flying. Yet senior officers on the station appear utterly powerless to fix the problems.’

‘Some students are flying accompanied only twice a month. Flying solo with that little recency is a safety risk.

‘Qualified Flying Instructors (QFIs) are working long hours in a very inefficient system. This has resulted in rest limits being compromised and duty day limits being exceeded.

‘The schedulers do not respect the regulations – and see instructors as an expendable resource – so we don’t get enough time to train ourselves and thereby prevent skill fade.

‘There is also chronic shortage of aircraft and a backlog of students.’ 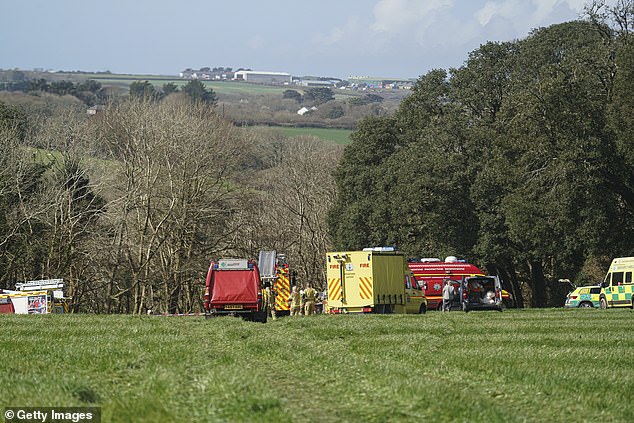 The huge backlog of students on the course is causing friction among trainee pilots at the air station – because as new officers arrive to begin training those who have been there a long time, and are behind schedule, realise they face even greater competition to secure aircraft time and to achieve their flying qualifications.

As well as teaching the students the flying instructors must also train themselves – known as Staff Continuation Training (SCT) – in order to maintain their skill levels.

The squadron leader said in his report it was a struggle to get scheduled for enough routine flying training.

Last night the RAF confirmed it was seeking to address the issues raised by the senior officer.

An RAF spokesman said: ‘The RAF encourages an open and honest safety culture and all personnel are encouraged to report any concerns.

‘A report from 72 Squadron led to improvements being identified and implemented to ensure the safety, morale and performance of the Squadron, the effectiveness of these measures will be closely monitored.’