‘RIP SN11’: SpaceX’s Starship rocket EXPLODES on the launch pad that may have been caused by a failed belly flop maneuver during its first high altitude flight test

SpaceX has lost its fourth Starship prototype following the launch of Serial Number 11 (SN11) that saw the rocket take off, disappear into a thick blanked of fog and crash down on the launch pad.

SN11 launched from the firm’s testing facility in Boca Chica, Texas around 9:15am ET, but 2.5 minutes into its first high altitude test the livestream froze and a commenter said: ‘Starship 11 is not coming back, don’t wait for the landing.’

‘We do appear to have lost all the data from the vehicle.’

At the time of the announcement, SN11 was still soaring through the sky, but came crashing down moments later.

CEO Elon Musk released a statement on Twitter shortly after the incident saying ‘engine 2 had issues on ascent & didn’t reach operating chamber pressure during landing burn, but, in theory, it wasn’t needed.

‘Something significant happened shortly after landing burn start. Should know what it was once we can examine the bits later today.’

NASASpaceFlight captured the event from cameras sitting near the launch pad, which saw Starship SN11 ‘come down hard’ and debris ‘came flying past the camera near the pad.’

Sources at the site say the rocket appeared to have been rotating on its axis more than previous flights, suggesting SN11 may have struggled during the belly flop maneuver. 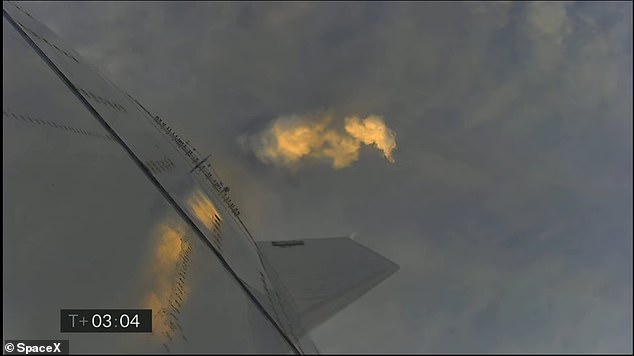 SpaceX has lost its fourth Starship prototype following the launch of Serial Number 11 (SN11) that saw the rocket take off, disappear into a thick blanked of fog and crash upon landing

SpaceX was set to launch SN11 Friday, but scrubbed the mission late in the afternoon due to dense fog covering the Boca Chica area.

However, the firm pushed ahead Tuesday even though weather appeared to be exactly the same.

Fog covered the massive rocket as it stood tall on the launch pad, only revealing itself when it ignited its three Raptor engines that sent streams of fire flowing out from the base.

SN11 took off, soaring above the testing facility as it attempted to reach a goal of six miles into the sky.

However, 2.5 minutes into its flight, SpaceX’s livestream froze – leaving the ground team and world in the dark.