She’s never one to shy away from taking risks when it comes to her wardrobe.

And Rita Ora got creative when it came to her accessories as she rocked up the MTV VMAs in New York City on Sunday night wearing personalised jewels on her teeth.

The singer, 30, turned heads on her arrival to the star-studded awards and no doubt had onlookers doing a double take as she smiled, with a gold cap and diamond-studded ‘R’ jewel sitting pretty on her pearly whites. 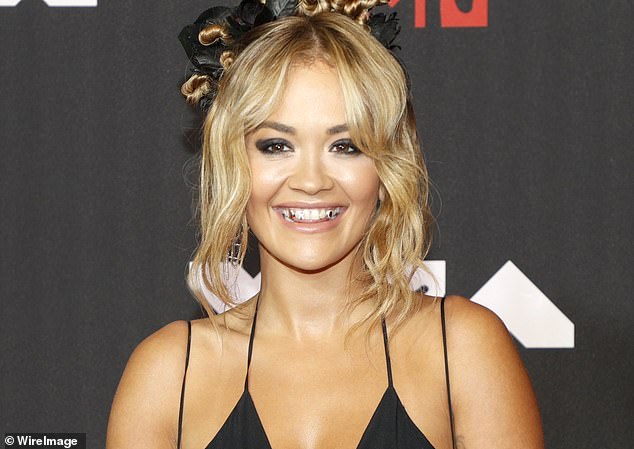 Bling: Rita Ora, 30, turned heads on her arrival to the MTV VMAs in New York on Thursday night as she flashed a slew of bling on her teeth, including a gold cap and personalised jewels

Alongside the initial was a small lightening bolt that sat in between two of her teeth, while a huge round-shaped black gem covered another tooth to the side of her mouth.

Rita, who is no stranger to rocking grills on her teeth from time to time, made sure to show off her decorative mouth as she beamed from ear-to-ear on her dramatic arrival to the red carpet.

The I Will Never Let You Down hit-maker stunned in all-black chemise top that came with a lengthy statement cape.

Her impressive ensemble boasted cold-shoulders, a plunging neckline and a split-front hemline to showcase her enviable abs. 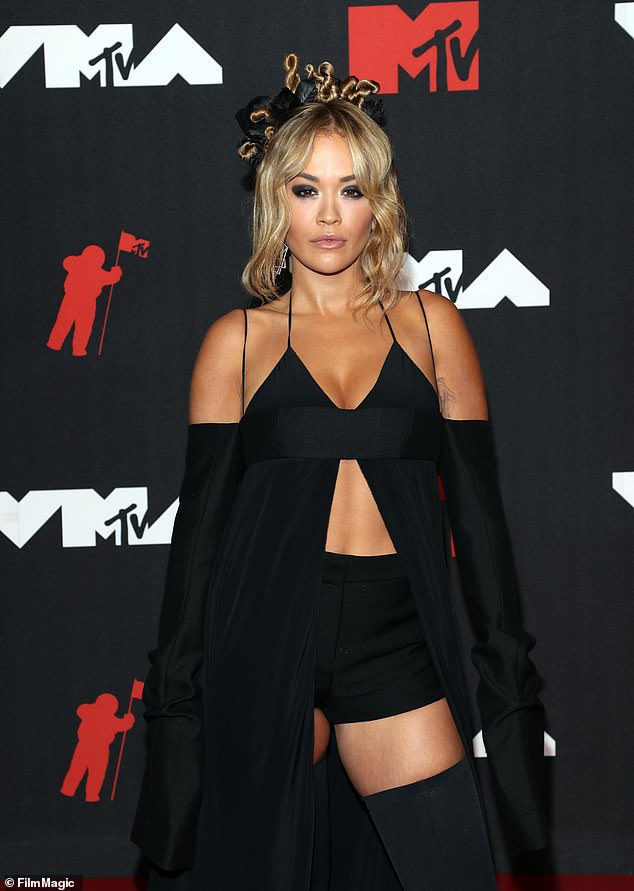 Stunning: The singer, 30, looked incredible in her provocative getup that paired together a lengthy black cape and thigh-high platform boots

Wearing a tiny pair of high-waisted black shorts, Rita added a dose of extra sass to her getup as she stepped out in daring thigh-high platform boots that left little to the imagination.

Commanding attention on the beauty front too, the vocal talent wore her blonde locks up in an edgy-looking knotted style, while leaving the front section of her tousled mane down to frame her face.

Rita completed her statement look with a pair of silver abstract earrings and a bold make-up look. 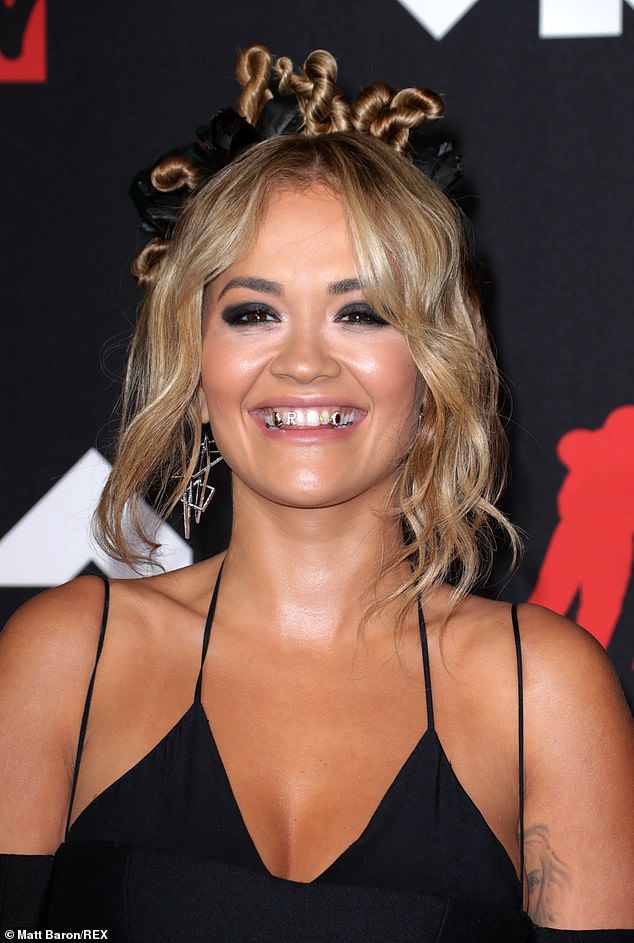 Wild: If that wasn’t enough, Rita added to her wild outfit with gold grills on her teeth – including a diamond-encrusted ‘R’ 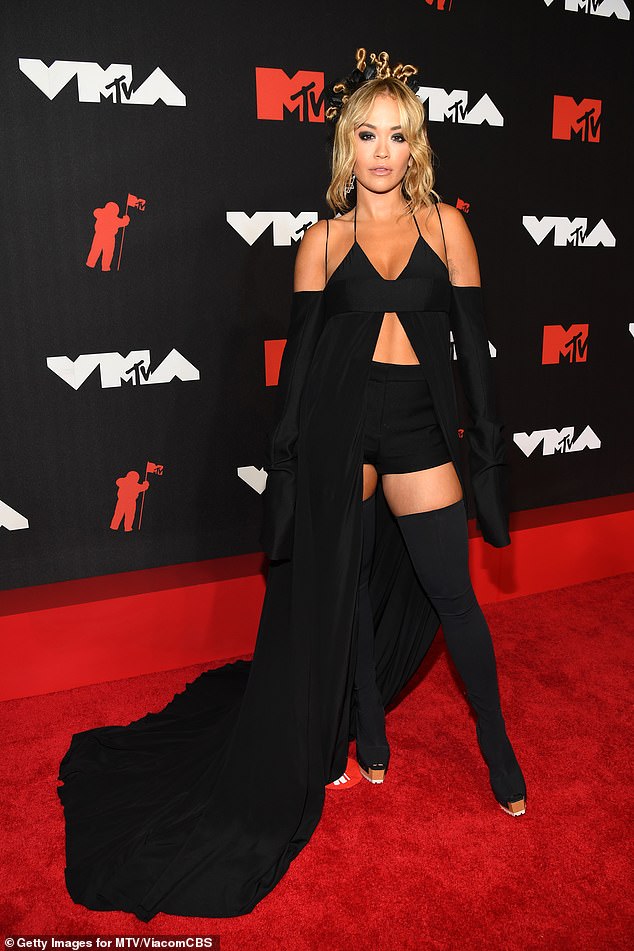 Wow! Rita slipped into something a little more dramatic for her red carpet arrival 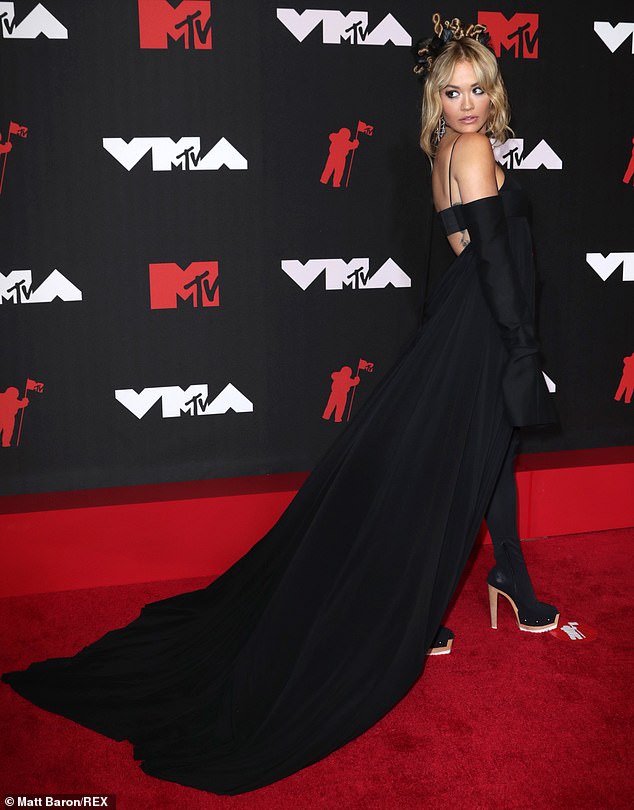 Drama: The singer wowed in an all-black chemise top and lengthy cape before hitting up the red carpet of the Barclays Center in Brooklyn, New York

The beauty opted for a dark smokey eye and paired the look with a more natural base, that included dewy skin and a nude-coloured lip.

On her arrival to the VMAs, held at the Barclays Centre in NYC, Rita made sure to work all her best angles and showcase her provocative ensemble on the red carpet ahead of the event.

During the show, Rita was seen up on stage introducing her close friend and fellow artist Ed Sheeran, who performed his new single Shivers on the night.

Ed was nominated for three awards on the night, including Video of the Year, Best Choreography and Best Art Direction. 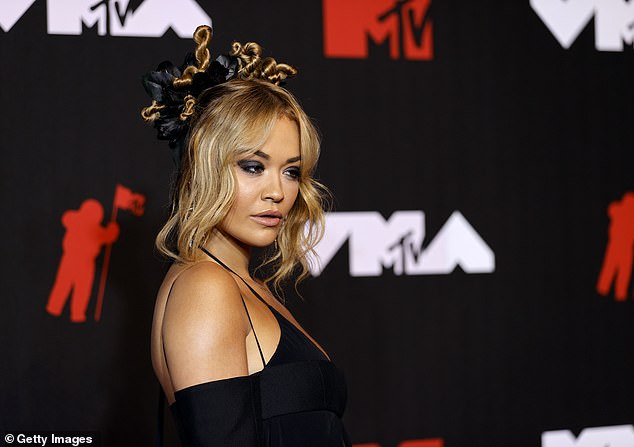 Stunning: Rita opted for a smoky eye makeup look, pairing the bold eye with a more natural base

Daring: The R.I.P hitmaker also sported a pair of black shorts while she added height to her frame with daring thigh-high platform boots

Rita, meanwhile, wasn’t the only one causing a stir on the red carpet, as a slew of stars were seen indulging in outrageous wardrobe moments.

Doja Cat – who was hosting the evening’s affair – was the star of the evening, strutting down the red carpet wearing a toga-inspired look with a black bustier and drapey plum fabric. 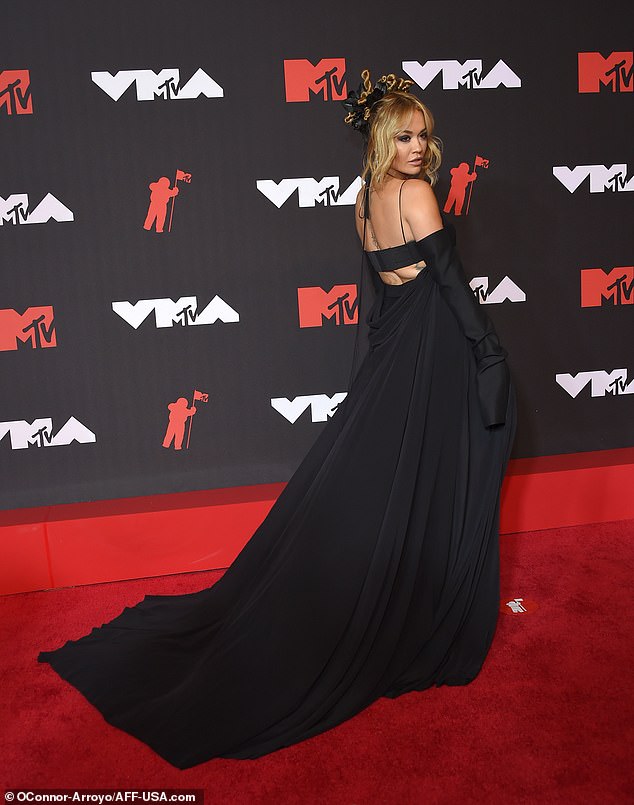 Outrageous: Rita brought all the drama to the VMAs, which has already seen a slew of stars indulging in outrageous outfit moments 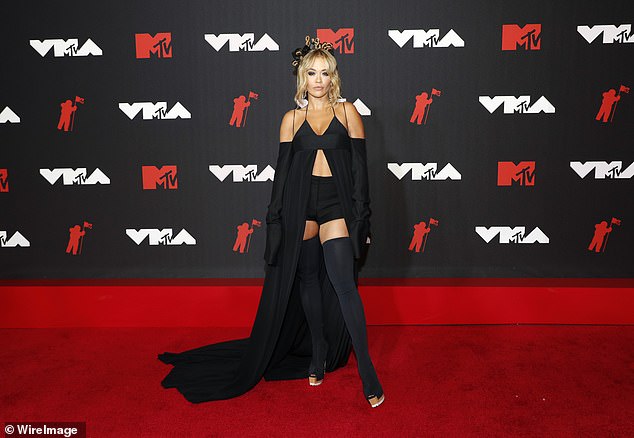 Goddess: The star exuded goddess-like vibes in the edgy outfit

The Montero (Call Me By Your Name) singer Lil Nas was electric as he arrived wearing a gorgeous lavender suit with an elegant and plenty of inspiration from Prince.

Justin Bieber led the list of nominees with seven nominations including top honour Video of the Year and Best Direction for POPSTAR.

He was also nominate for Artist of the Year, Best Cinematography for Holy and Best Pop Song, Best Editing and Best Collaboration for Peaches.

He scooped two of the seven nods, picking up the awards for Artist of the Year and Best Pop Song. 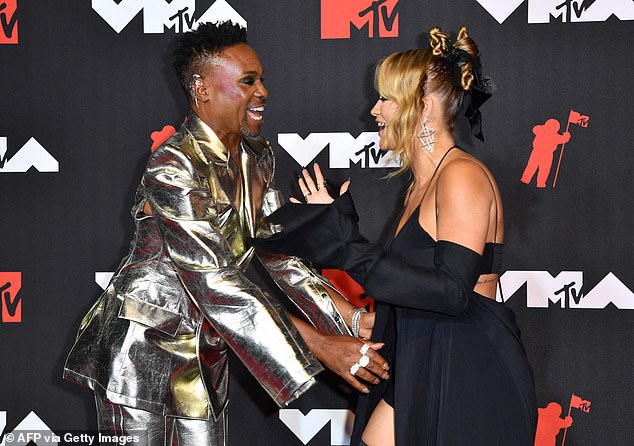 Return to New York: This year’s VMAs are taking place at the Barclays Center in Brooklyn, New York for the first time in eight years. Pictured left: Billy Porter

The Foo Fighters, meanwhile, received the first-ever VMAs Global Icon award to be handed out this year and the band performed at the show for the first time since 2007.

One act that wasn’t seen at the event was Lorde as she dropped out from the list of performers on Friday. The move was announced on the production’s official Twitter account.

Anticipation: No doubt the musical performances during the event are highly-anticipated as Bieber will take the stage at the VMAs for the first time in six years 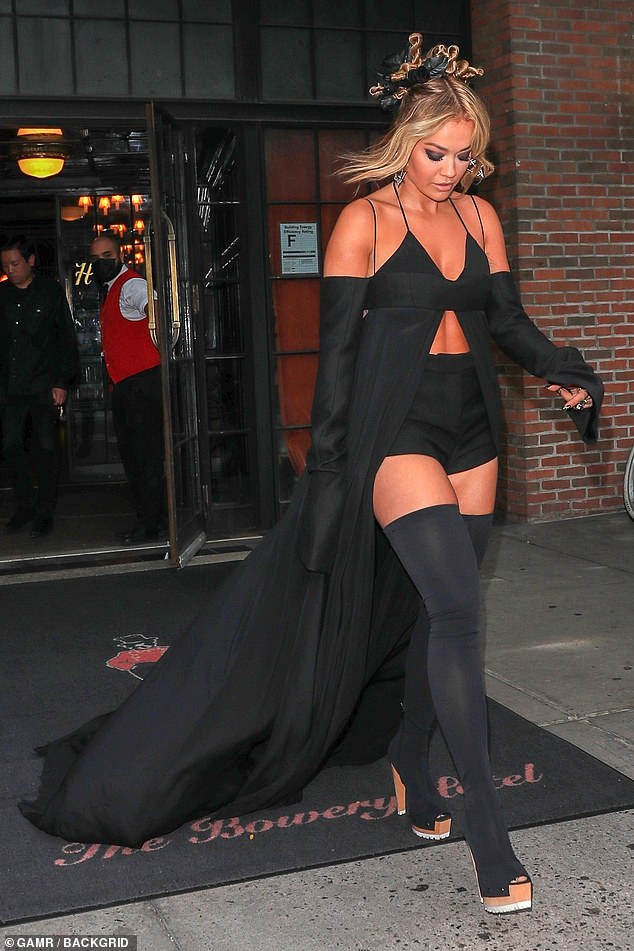 Angles: The star worked all her best angles on the red carpet for the event, showing off her glamorous look

The Walking Dead: World Beyond: Iris Bennett welcomes sister Hope but refuses to leave with her

SNP torn apart for 'bringing Scotland to its knees' as business...

Stroke: The worst drink for increasing your risk by a staggering...