Although Jupiter’s moon Europa may be one of the places in the solar system to look for life due to its ocean, robots could have to dig further than previously thought to find it, a new study suggests.

According to the research, any robot landers that enter Europa’s atmosphere will have to dig at least 12 inches down.

This is a result of the ice moon being hit with ‘impact gardening,’ a phenomenon that is the result of space radiation hitting molecules and bringing some of them to the surface, while pushing other parts down, mixing with the subsurface.

‘If we hope to find pristine, chemical biosignatures, we will have to look below the zone where impacts have been gardening,’ said the study’s lead author, University of Hawaii at Manoa planetary research scientist Emily Costello in a statement. 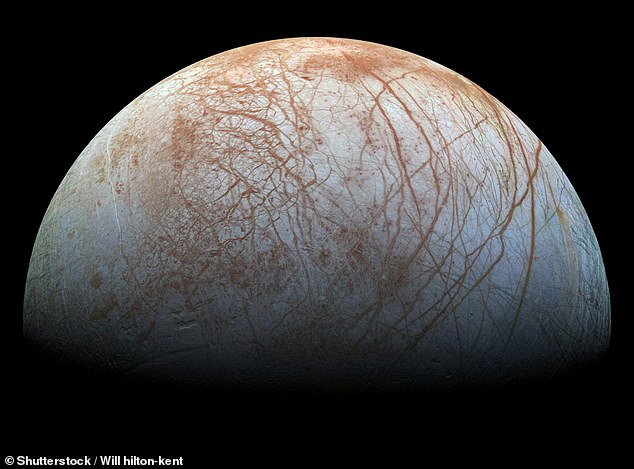 Jupiter’s moon Europa may be one of the places in the solar system to look for life due to its ocean, but robots could have to dig further than previously thought to find it, a new study suggests 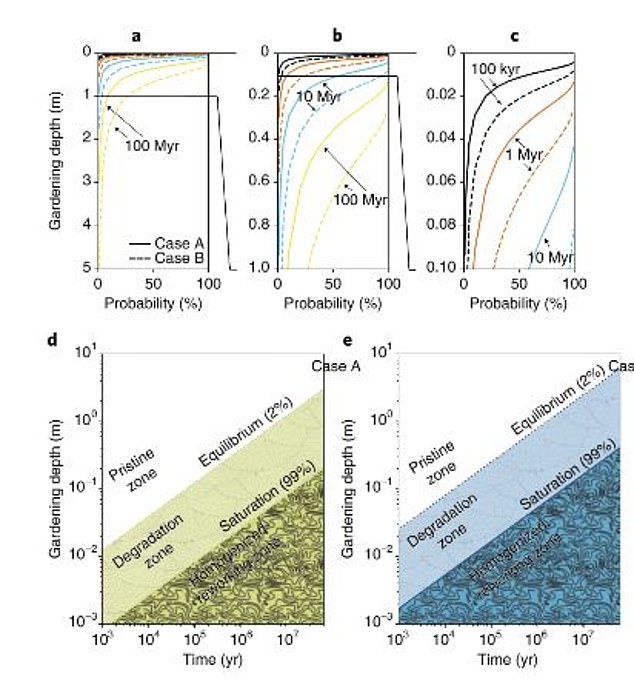 According to the research, any robot landers that enter Europa’s atmosphere will have to dig at least 12 inches down as the ice moon is hit with ‘impact gardening.’ This is a phenomenon that is the result of space radiation hitting molecules and bringing some of that to the surface, while pushing other parts down, mixing with the subsurface 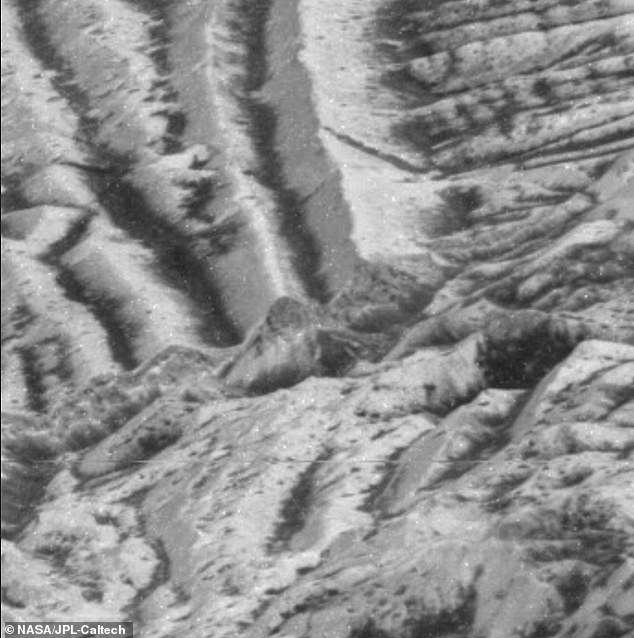 In this zoomed-in image of Europa’s surface, captured by NASA’s Galileo mission, the thin, bright layer, visible atop a cliff in the center shows the kind of areas churned by impact gardening

‘Chemical biosignatures in areas shallower than that zone may have been exposed to destructive radiation.’

Previous research has suggested that any potential landers would have to dig through 8 inches of ice in an effort to find evidence of biosignatures.

The concept of impact gardening on Europa – or other airless bodies in the solar system – is not new, but this research takes into account how it’s being impacted by radiation from space and if it impacts the global ocean that Europa is widely believed to have.

POCKETS OF WATER IN THE EUROPA ICE

Jupiter’s fourth largest moon Europa has pockets of ice a mile beneath the surface of its frozen outer shell.

These pockets were spotted by NASA scientists reviewing images captured by the Galileo spacecraft in the 1990s.

There are several pockets with dark spots that are thought to be saline solutions that slow the freezing.

There is evidence that these pockets of liquid water last 10,000 years and could house microbial life.

‘This work broadens our understanding of the fundamental processes on surfaces across the solar system,’ the study’s co-author, Cynthia Phillips, a Europa scientist at NASA JPL added.

Europa’s ocean, which likely contains pockets of water that could last for about 10,000 years according to a previous study, likely comes in contact with the moon’s rocky core.

If it does, it could create a range of chemical reactions and perhaps, chemical signs of life.

The research has been published in in the journal Nature Astronomy.

The findings are of interest to NASA and its upcoming 2024 Europa Clipper mission, a trek that could answer whether the icy celestial body is habitable for humans and capable of supporting life.

In addition, it will look for potential areas on the moon for a lander to touchdown.

The spacecraft will arrive at the moon in 2030 and use radar to look beneath the surface and an analyzer to study dust coming from the world in plumes. 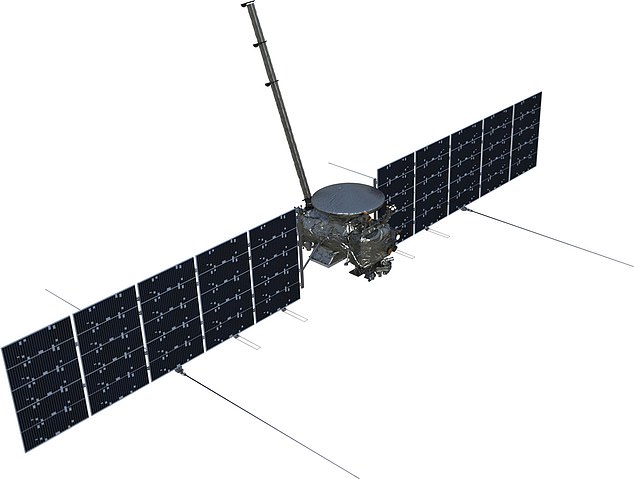 The upcoming NASA Europa Clipper mission (pictured), a trek that could launch as early as 2024 to answer whether Europa is habitable for humans and capable of supporting life 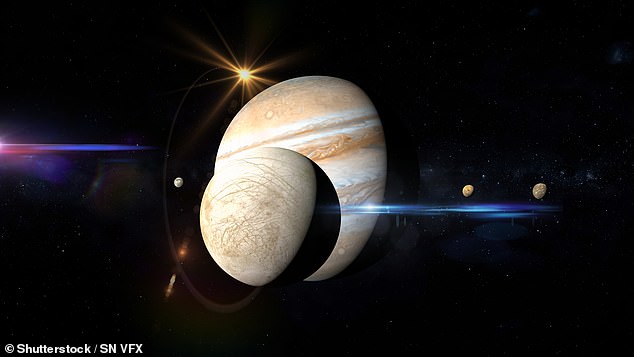 The Europa Clipper will orbit Jupiter and study the fourth-largest of the planet’s 79 moons, as well as its ocean

The Europa Clipper will orbit Jupiter and study the fourth-largest of the planet’s 79 moons, as well as its ocean, according to the US space agency.

In addition, it will look for potential areas on the moon, the sixth-largest in the solar system, for a lander to touchdown.

In 2016, Hubble uncovered tantalizing evidence that plumes of water vapor were erupting from Europa’s surface.

Two years later, after reexamining dating from the Galileo mission, scientists said the Galileo spacecraft may have flown through a giant plume of water that originated on Europa.

In February 2020, a British scientist said it is ‘almost a racing certain’ that Jupiter’s moon Europa is home to alien life, adding they could be ‘octopus’ like creatures.

In November 2020, a study found that Europa may ‘glow in the dark’ as the far side of the moon is being bombarded with radiation from Jupiter.

WHAT DO WE KNOW ABOUT EUROPA AND WHY IS IT SO SPECIAL?

Europa orbits Jupiter every 3.5 days and is tidally locked – just like Earth’s Moon – so that the same side of Europa faces Jupiter at all times.

It is thought to have an iron core, a rocky mantle and a surface ocean of salty water, like Earth.

Unlike on Earth, however, this ocean is deep enough to cover the whole surface of Europa, and being far from the sun, the ocean surface is globally frozen over.

Many experts believe the hidden ocean surrounding Europa, warmed by powerful tidal forces caused by Jupiter’s gravity, may have conditions favourable for life.

Nasa scientists are on the verge of exploring Jupiter’s ocean moon Europa for signs of alien life.

Europa is our best shot of finding biological life in the solar system, researchers say.

The space agency is priming two probes, including one that will land on its surface, to explore the distant moon in detail within the next decade, the agency says.