As the mother of a 17-year-old girl at a central London sixth form, I can’t say the revelations over the past few days about a toxic culture of sexual abuse in schools have come as much of a surprise. In fact, if anything, I’m amazed it’s taken this long.

Over 8,000 testimonies detailing incidents of sexual abuse have now been posted on the website Everyone’s Invited, founded by a young graduate called Soma Sara as a way of turning the spotlight on this problem. They range in severity from verbal harassment to sexual coercion to allegations of rape.

The Department of Education has responded by saying it will work with the police to establish the facts, and one of the country’s most senior officers, Chief Constable Simon Bailey, is now heading up a task force to investigate. A national hotline has been set up to encourage victims to come forward. 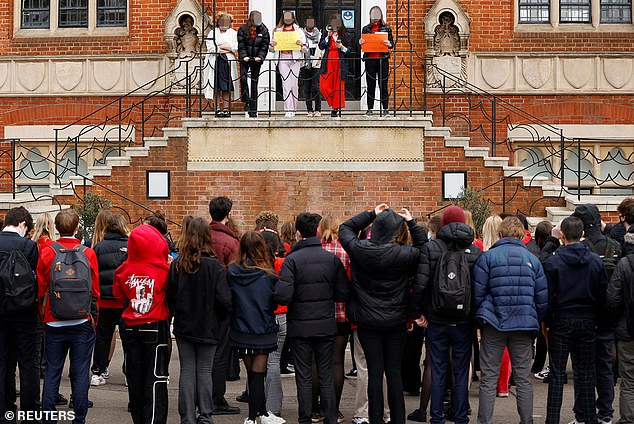 Over 8,000 testimonies detailing incidents of sexual abuse have now been posted on the website Everyone’s Invited (Pupils stage a protest against rape culture at Highgate School in London) 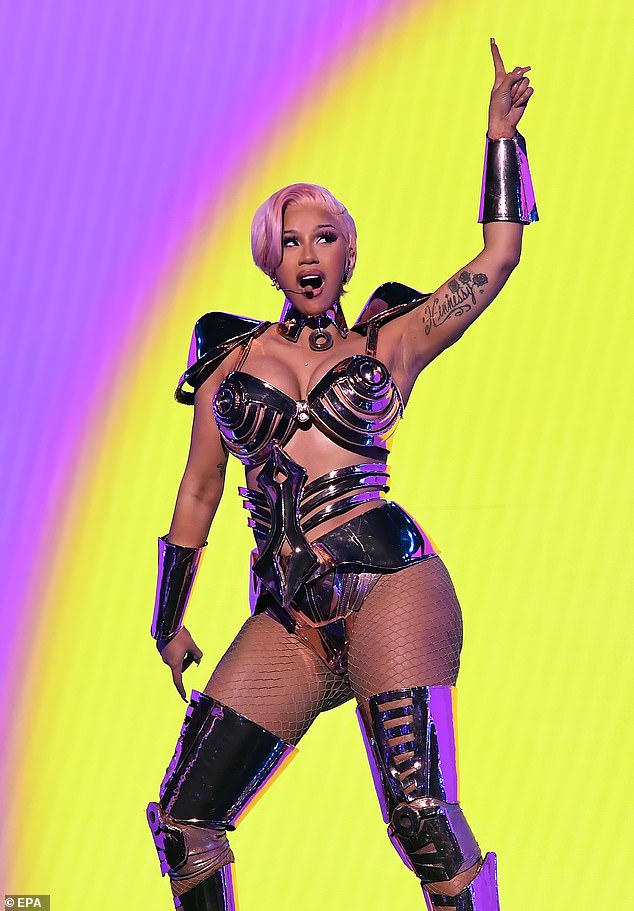 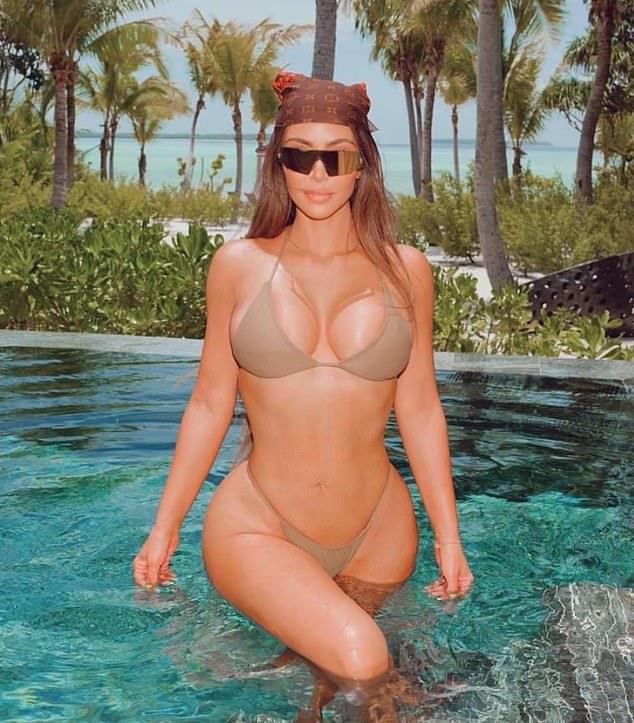 And so you have the perfect storm: boys who have grown up watching women being humiliated and abused online; and girls who feel it’s incumbent on them to dress like Kim Kardashian and writhe around like Cardi B at parties. (Pictured, Kim Kardashian)

It is a daunting task. Girls and young women sharing their experiences is one thing; it’s quite another to establish how many of these events actually took place.

Yes, victims of sexual violence should be believed, but then again people don’t always tell the truth, and teenagers in particular can be particularly unreliable in this respect especially when there are other factors – parents, teachers, peer pressure – at play.

It will be incumbent on the police to protect the innocent as well as prosecute the guilty and, in the current climate of hysteria, that’s going to be a tricky path to navigate.

In particular, it is vitally important that we don’t succumb to the notion, already taking hold in some circles, that all teenage boys are abusers. Most of them are frightened and confused by these reports, paralysed by fear that they will somehow, inadvertently, get themselves accused of something awful, worried that they will never even be able to speak to a girl again without risking arrest.

At Dulwich College – one of the schools named on the website – innocent boys are being abused online and at the school gates simply by association. That is not justice, it is simple pitchforkery, and it must not be tolerated. I certainly don’t envy Mr Bailey his job.

That said, I really think this is more than just another one of those moments of collective internet-driven hysteria that seem to characterise life at the moment. I’ve read those testimonies on Everyone’s Invited, and I’m sad to say that many of the incidents described chime with what I’ve heard, anecdotally, over the past few years from my daughter and her friends.

Particularly familiar are the accounts of explicit images being shared, of girls being filmed without their consent and also certain recurring themes, such as pressure to perform specific types of sex acts, many of a particularly humiliating nature. Casual misogyny is another common theme, along with acts of sexual revenge and drug and alcohol abuse.

It all adds up to a sad and depressing picture of a generation for whom sex appears to have become less an intimate and private journey of personal discovery and more a source of unhappiness. There is no doubt in my mind that there is something very worrying going on, something that is not only deeply damaging for girls, but also boys.

Of course sexual harassment in schools is nothing new. Even in my day it existed, although we would probably not have called it that. There was always that one boy who took everything too far, the kind who would make it his mission to importune as many girls as he could, who would whip up your skirt in PE, make obscene suggestions and lurid gestures, overstep the mark at parties.

As young women, dealing with these types was part of growing up. We found safety in numbers, practised withering put-down lines. But in truth most boys were actually quite respectful of girls, certainly once you managed to get them away from their mates. Sure, they had urges, as teenage boys have had from time immemorial. But they had very little sense of what to do with those urges, and even less expectation of being allowed to act on them.

This murky world – once confined to the back-alleys of the adult mind – has stepped out from the shadows and into the mainstream, and it has infected the minds of the most vulnerable and impressionable in society: our children. We now have a generation whose formative sexual experiences come not from the gentle awakenings of teenage desires but from the brutal humiliation of women for profit and the more depraved fantasies of men. 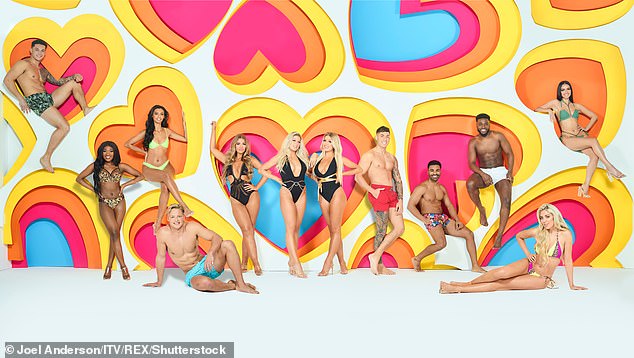 From on-camera copulation in shows like Big Brother and Love Island to mainstream TV programmes like Naked Attraction… which reduce people to nothing more than their genitals. (Pictured, Love Island contestants from Series 6) 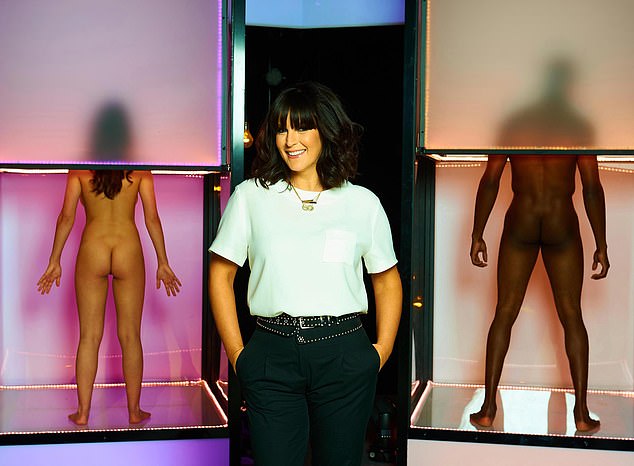 The assumption, for example, that we are all secretly desperate for ‘it’; the idea of group sex as standard; the obsession with certain types of acts designed to humiliate; the fetishisation of rape. It’s clear from these testimonies that the depraved values of an industry that thrives on the abuse of women have penetrated the minds of young people and effectively normalised them at a crucially formative age.

And they are values that popular culture only reinforces. From on-camera copulation in shows like Big Brother and Love Island to mainstream TV programmes like Naked Attraction, which reduce people to nothing more than their genitals, to celebrity sex tapes featuring the likes of Paris Hilton and Kim Kardashian and beyond, to the pop-porn videos and lyrics of global stars like Cardi B and Meghan Thee Stallion, sexuality – and particularly if it’s female – is projected as nothing more than a commodity.

And like all commodities that are widely available, its value has plummeted. What used to be rather special and a little bit mysterious is now about as commonplace as a £2.99 pack of chicken thighs in Tesco. And worthy of about as much respect.

And so you have the perfect storm: boys who have grown up watching women being humiliated and abused online; and girls who feel it’s incumbent on them to dress like Kim Kardashian and writhe around like Cardi B at parties. An explosive, toxic mixture of assumptions and misunderstanding compounded by youth, inexperience, hormones and the feverish atmosphere of social media.

How we unpick this mess is anyone’s guess. Education is important, of course, and as parents it is important that we speak to our children about these issues. I’ve certainly had some long conversations with both of mine. I wouldn’t say they have been enjoyable (no parent really wants to discuss these things with their child) but they have been constructive and, I think, necessary.