Artificial lightning has been developed by scientists, who say it fires a bolt of plasma at slurry, breaking up 99 per cent of methane before it can enter the atmosphere.

The technology is designed to strip pollutants from animal waste, according to the firm behind the system being tested in the UK, N2 Applied from Oslo, Norway.

Independent consultants, ADAS, were bought in to test it out on a farm in Buckinghamshire, finding it had a notable impact on harmful waste gasses.

They discovered that it reduced ammonia in slurry by 90 per cent and cut the amount of methane from the waste product almost completely, by 99 per cent. 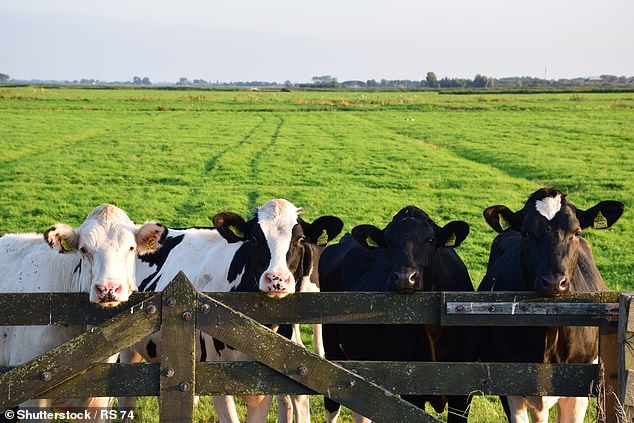 Artificial lightning has been developed by scientists, who say it fires a bolt of plasma at slurry, breaking up 99 per cent of methane before it can enter the atmosphere

They discovered that it reduced ammonia in slurry by 90 per cent and cut the amount of methane from the waste product almost completely, by 99 per cent

Using a scientific technique that applies just air and electricity to slurry, they do a ‘plasma conversion’.

Plasma is a hot form of matter where electrons are ripped from atoms and molecules break down.

The conversion ‘locks in’ both methane and ammonia to the liquid waste material, producing a sustainable nitrogen-rich fertiliser.

Treated slurry produced on-farm has the potential to reduce the need for chemical fertiliser.

This in turn can further reduce the greenhouse gas emissions from the production of fertiliser.

Known as the N2 Unit, it can process liquid material like cow or pig slurry and turn it into Nitrogen Enriched Organic fertiliser (NEO).

As long as it is liquid organic material, the N2 unit can treat it, they said.

Besides cow or pig slurry this can be digestate from an Anaerobic Digestion (biogas) plant or other organic waste streams.

It works by generating plasma, which is a stream of extremely heated matter.

Plasma is so hot that electrons are ripped from atoms and this leads to the point where the molecules break down.

N2 smash that ultra hot stream into ammonia molecules to produce pure nitrogen, which is then absorbed into the slurry.

This is useful to the farmer, as nitrogen applied to slurry is an essential component of fertiliser, so can further help growth of crops, saving the farm money.

If final versions of the technology prove affordable for general use, it could tackle climate change and improve the smell of the countryside, N2 told the BBC.

The smell improvements come from the removal of the methane and ammonia, which could in turn improve the quality of air in cities.

Clouds of farmyard ammonia often find their way into cities, and when there they combine with chemicals in pollution, forming tiny particles breathed into the lungs.

These particulates contain chemicals from vehicle exhausts, gas boilers, paint, cleaning fluids and even plastics from tyres and breaks, according to a BBC report.

Eliminating ammonia from the pollution mixture, ending the harmful reactions, could help reduce the risk it poses to human health.

Farmer Neil Dyson told the BBC he saw this as a triple win that ‘ticks lots of boxes,’ including cutting the carbon footprint of the farm by reducing methane emissions.

‘It will help the Clean Air Act by removing ammonia,’ Dyson said, and ‘by locking nitrogen intro the slurry it improves the quality of the slurry so it should allow us to reduce our need for artificial fertiliser.’

N2 Applied said their technology could play an important part in the drive to cut carbon emissions from the farming and wider agricultural sector.

‘The UK has legally binding ammonia reduction commitments and the projections are that the target reductions will not be met,’ Dr Rachel Thorman from ADAS told BBC News.

However, it isn’t clear what the final production will cost, particularly the cost of electricity that is needed to produce the bolt of plasma.

‘It is our ambition to improve global food production by increasing yield and reducing emission at the same time,’ N2 Applied said on its website.

‘In essence, we change the current practice of an inefficient and polluting linear chemical fertiliser chain into an improved circular future practice on the farm.

It works by generating plasma, which is a stream of extremely heated matter, and firing it at slurry, to force the absorption of ammonia and methane – producing nitrogen 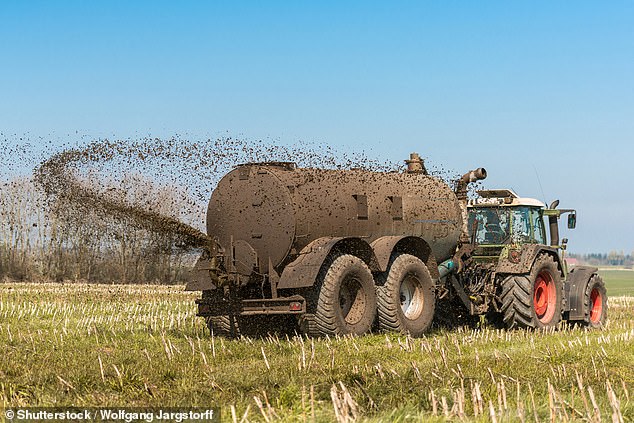 Independent consultants, ADAS, were bought in to test it out on a farm in Buckinghamshire, finding it had a notable impact on harmful waste gasses

The most important effects of treating slurry or biogas digestate in a N2 Unit are:

‘We shift centralised fossil-based production to local on-farm production using renewable energy. And that is a much-needed gamechanger!’

To meet a 2050 net zero carbon target in the UK, the Committee on Climate Change recommended an annual reduction of 18.6 million tonnes CO2 from livestock.

The National Farmers’ Union has set a target of 11.5 million tonnes of CO2 equivalent emissions per year by 2035.

Adopted across the UK dairy herd, N2’s technology could reduce and remove 2.42 million tonnes CO2e per year – 13% of the Committee on Climate Change recommendation, and 21% of the NFU target.

The Intergovernmental Panel on Climate Change (IPCC) has estimated that between 10 and 12 per cent of all anthropogenic emissions derive from agriculture.

‘As the dairy industry moves to counter its environmental impact, it is seeking out practical innovation that can tackle the biggest problems while introducing new farming practices,’ he said.

‘Combined, this supports an approach to sustainable food production that can enable more people to be fed with far-reduced impact on our world,’ he said.

THE ENVIRONMENTAL IMPACT OF FARMING COWS

The livestock animals are notorious for creating large amounts of methane, which is a major contributor to global warming.

Each of the farm animals produces the equivalent of three tonnes of carbon dioxide per year and the amount of the animals is increasing with the growing need to feed a booming population.

Methane is one of the most potent greenhouse gases, trapping 30 times more heat than the same amount of carbon dioxide.

Scientists are investigating how feeding them various diets can make cattle more climate-friendly.

They believe feeding seaweed to dairy cows may help and are also using a herb-rich foodstuff called the Lindhof sample.

Researchers found a cow’s methane emissions were reduced by more than 30 per cent when they ate ocean algae.

In research conducted by the University of California, in August, small amounts of it were mixed into the animals’ feed and sweetened with molasses to disguise the salty taste.

As a result, methane emissions dropped by almost a third.

‘I was extremely surprised when I saw the results,’ said Professor Ermias Kebreab, the animal scientist who led the study.

‘I wasn’t expecting it to be that dramatic with a small amount of seaweed.’

The team now plans to conduct a further six-month study of a seaweed-infused diet in beef cattle, starting this month.