From leopard spots to tiger stripes, fur patterns among cats are some of the most instantly recognisable markings in the animal kingdom.

Now, researchers have identified the gene that is behind these patterns.

Analysis of skin samples from cat embryos at different stages of development helped experts from the HudsonAlpha Institute for Biotechnology in Huntsville, Alabama explore the genetics behind the wide range of cat markings.

After birth, newborn cats, from the humble tabby to the spotted leopard, have the same coat pattern and colour they will have for their entire life.

The team found that the signalling molecule encoded by the gene Dkk4 is behind the decorations of a variety of animals, such as leopards, tiger and cheetahs.

Differences in the expression of the molecule while the embryo is still developing lead to the variety of patterns produced during later hair growth. 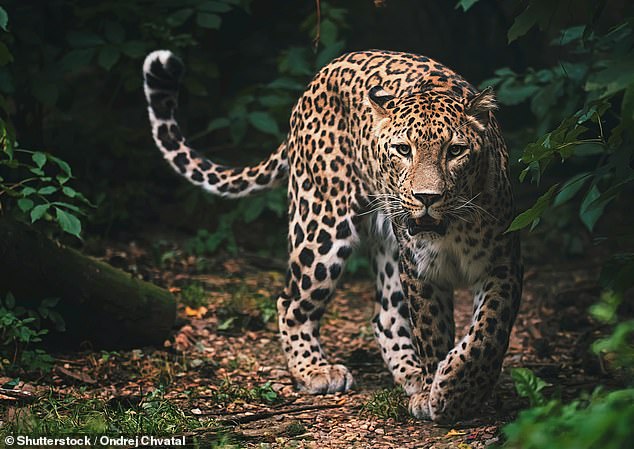 From leopard spots to tiger stripes, fur patterns among cats are some of the most instantly recognisable markings in the animal kingdom 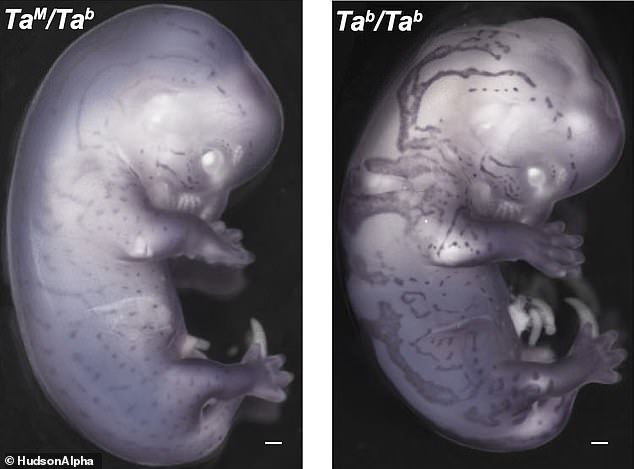 Analysis of skin samples from non-viable cat embryos at different stages of development, helped experts from the HudsonAlpha Institute for Biotechnology in Huntsville, Alabama explore the genetics behind the wide range of cat markings

The leopard (Panthera pardus), is a member of the cat family and famed for its spotty fur.

It is found in sub-Saharan Africa, Western and Central Asia, Southern Russia, and on the Indian subcontinent to Southeast and East Asia.

It is listed as Vulnerable on the IUCN Red List due to the threat of habitat loss and fragmentation keeping different groups apart and reducing breeding opportunities.

The leopard is locally extinct in areas it once roamed freely, including Hong Kong, Singapore, South Korea, Jordan, Morocco, Togo, the United Arab Emirates, and Uzbekistan.

It was also once found in Lebanon, Mauritania, Kuwait, Syria, Libya, Tunisia and most likely in North Korea, Gambia, Laos, Lesotho, Tajikistan, Vietnam and Israel.

In fact, it now only covers about a quarter of the range it once roamed.

It has relatively short legs compared to other wild cats, with a long body and a large skull.

Rather than spots, the fur is actually marked with rosettes.

It is similar to the Jaguar, and one of five remaining members of the Panthera group of cats.

It is unique thanks to its well camouflaged fur for its habitat, opportunistic hunting behaviour, broad diet, strength, and its ability to adapt to a variety of habitats.

These range from rainforest to steppe, including arid and montane areas.

The evolution and process behind the beauty of wild and pet cats has long fascinated scientists, including the author of this new study, Prof Gregory Barsh.

The US-based expert wanted to track the moment these patterns first begin to develop, and found it is while the embryo is still developing.

However, the developmental process that determines whether a hair follicle produces black or yellow melanin remains unclear.

Prof Barsh said: ‘From leopards to giraffes to zebras, the developmental biology of self-organising colour pattern in mammals is an unsolved mystery,’ adding that ‘they come in a variety of sizes and a range of varying fur colours and patterns.

‘Tigers with black stripes on an orange or white background roam the grasslands of Southeast Asia and India.

‘Spotted cheetahs chase antelope through the shrubland in Africa. Jaguars with their rosette patterned coats stalk down prey throughout South and Latin America.

‘And domesticated cats of many coat colours and patterns bask in the sunlight of living rooms across the world.’

Different hues – such as black, brown, yellow or even red – are known to appear when adjacent follicles produce particular melanin pigments.

But the process of determining them remained unclear. In the study, the US team scanned skin samples of unviable embryos from feral cats.

They were at different stages of development and would otherwise have been discarded, with genetic analysis of single cells and proteins in tissue sections finding that the Dkk4 gene played the key role.

The shape and colour of the resulting pattern during hair growth was tracked back to the signalling molecule from this gene.

The breeds, known as Abyssinian or Servaline Savannah, have a salt and pepper coat instead of the traditional stripes or spots.

‘Intricate colour patterns are a defining aspect of morphological diversity in cats,’ said Prof Barsh, adding that ‘early in development, we identify stripe-like alterations in epidermal thickness preceded by a gene expression pre-pattern.’

He added: ‘Our results bring molecular understanding to how the leopard got its spots. They suggest similar mechanisms underlie periodic colour pattern and hair follicle spacing and identify targets for diverse pattern variation in other mammals.’

For example, cheetahs are born with the same number of spots as they will have in adulthood. They just grow in size. 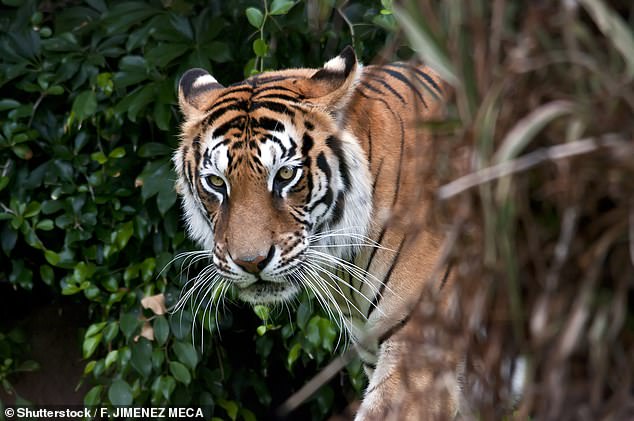 After birth, newborn cats, from the humble tabby to the spotted leopard, or the tiger (pictured) have the same coat pattern and colour they will have for their entire life. Stock image

Intricate colour patterns are a defining aspect of the diversity in the cat family.

To find out why, the team used a technique called single-cell gene expression analysis on the skin of non-viable cat embryos.

They were at different stages of development when studied.

They did this to identify when, where, and how, during foetal development, cat colour patterns are established.

They found that early in development, strip-like alterations appeared in skin thickness, which was preceded by a gene expression pre-pattern.

The secreted Wnt inhibitor encoded by Dickkopf 4 plays a central role in this process, they found.

It is mutated in cats with the ticked pattern type of marking.

‘Our results bring molecular understanding to how the leopard got its spots, suggest that similar mechanisms underlie periodic colour pattern and periodic hair follicle spacing, and identify targets for diverse pattern variation in other mammals,’ the authors wrote.

Complex arrangements of alternating patches of light and dark hair as seen in a cheetah, jaguar or ocelot, are called periodic colour patterns.

They are difficult to study because there is no real counterpart in model organisms.

Prof Barsh, an animal morphology expert, said: ‘The genes that control simple colour variation, like albinism or melanism, are the same in all mammals for the most part.

‘However, the biology underlying mammalian colour pattern has long been a mystery, one in which we have now gained new insight using domestic cats.’

The study in Nature Communications sheds fresh light on the rosette shaped markings on leopards and the stripes on tigers.

‘Several of the molecules, including Dkk4, are known to function coordinately as activators and inhibitors, exactly as Alan Turing predicted 70 years ago.’

Lab member Dr Kelly McGowan said: ‘Our findings suggest even before pigment producing melanocyte cells enter the epidermis, the cells are predestined to signal for a specific fur colour.

‘By understanding the developmental window and cell type in which colour pattern establishment occurs, we were able to dive deeper and discover the molecules involved in pattern development.’

Previous work has shown coat-colour genes are involved in many other important biological pathways, some having relevance to human health.

Added Dr Kaelin: ‘Our findings set the stage for understanding how biodiversity arises on an evolutionary timescale – the genetic differences that are responsible for tiger stripes, cheetah spots and leopard rosettes.

‘As Rudyard Kipling’s work suggests, these basic questions inspire appreciation for natural diversity among a broad audience in a way that discussions of conservation practices do not. ‘

The findings have been published in the journal Nature Communications.