In hindsight Craig Levein was simply a manager ahead of his time. The reign of the former Scotland boss will always be remembered for an infamous defeat to the Czech Republic in Prague when he went with no strikers in his starting eleven. With John McGinn in the team 4-6-0 might have worked like a dream.

Put the Aston Villa midfielder in the dark blue shirt of Scotland and he thinks he’s Harry Kane. A double in this comfortable, satisfying rout of the Group F minnows took the former Hibs player to ten goals in 32 caps. Nine of the ten strikes have come in his last 14 internationals and McGinn has now scored a staggering 41 per cent of the goals scored by Scotland’s national team since Steve Clarke took charge.

Quality service helps, of course. Both McGinn goals came from perfectly judged Kieran Tierney assists, the Arsenal defender notching a personal hat-trick with the pass from which Che Adams put the Scots 3-0 up with his first international goal in three appearances with 20 minutes to play. 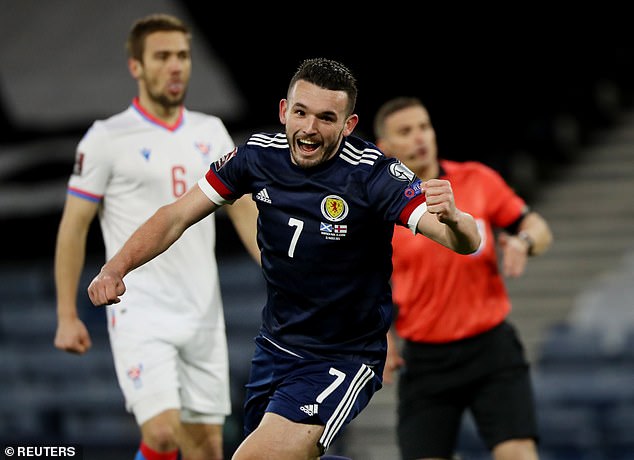 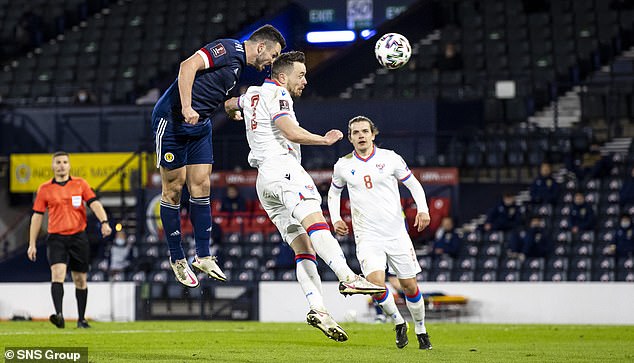 The fourth goal came from a back post header from Ryan Fraser from an Andrew Robertson cross and put a pleasing sheen on the final scoreline. The Newcastle man’s third international goal put the top and tails on a week of World Cup qualifiers when Steve Clarke’s side played three, drew two and won one.

The next competitive fixture at Hampden is the opening game of the delayed Euro 2020 finals against the Czech Republic on June 14. And, while Denmark threaten to run away with the group after a 4-0 win over Austria, evidence is growing of a Scotland team capable of challenging for second.

Callum McGregor threaded the ball to Kieran Tierney, the defender defying his position as a left sided centre back to make the kind of overlapping run fans of Arsenal and Celtic know well. His performance here showed once again that he’s a fine footballer wherever he plays. A perfectly judged cut-back provided the opportunity for McGinn to sweep the Scotland opener low into the net with his left foot.

The capacity of Hampden Park is almost the same as the entire population of the Faroe Islands and, unbeaten in nine previous meetings, Scots everywhere settled back in their armchairs in anticipation of a turkey shoot. Despite their lowly ranking of 107 in the world, however, the visitors proved a tougher nut to crack than expected.

Never quite in the same category as a San Marino or an Andorra the Faroes embarrassed the Scots with draws in infamous Euro qualifiers in 1999 and 2002 and their strength and athleticism was obvious from the start. In central defender Sonni Nattestad they had a player who would fancy his chances in an arm wrestling contest with Tyson Fury.

Against Austria in Vienna on Sunday they took the lead after five minutes before losing 3-1. Here, again, they could have shocked their more fancied hosts in the early stages.

A heavy touch let Meinhard Olsen down when he sprinted in behind the Scotland defence in the first attack of the match. Earning his 56th cap as a replacement for David Marshall, Hearts keeper Craig Gordon produced a quite stunning fingertip save to push Brandur Hendriksson’s thumping left foot strike at goal from 20 yards as Scotland stood off after 16 minutes.

Where Marshall was criticised for failing to stop a long range strike from Dor Peretz in Scotland’s 1-1 draw is Israel, Gordon was equal to this one. Just as well, was the cry. 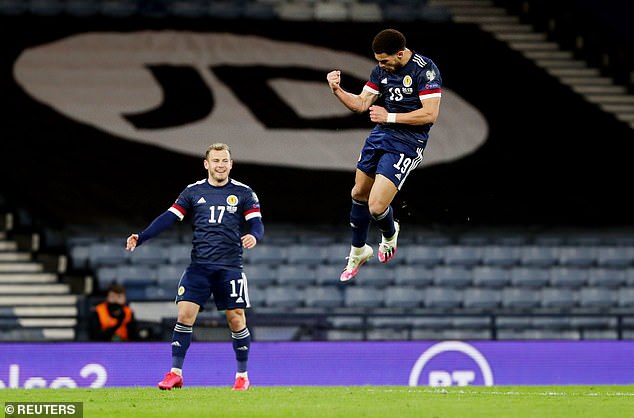 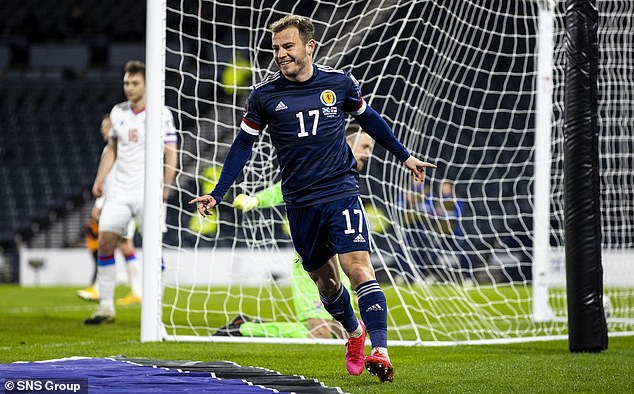 Thereafter it never felt as if Scotland were in danger, exactly. Yet, on an unseasonally chilly night in Glasgow they just struggled to work up a head of steam in front of goal until after the break.

The closest the Scots came to a second goal before half-time was when Scott McTominay – restored to the right side of a three man backline – glanced Fraser’s enticing free kick into a crowded area inches wide of the upright.

There was no cause for panic. A goal to the good, patience was always likely to be a asset.

And yet. The Faroes came close to the next goal in the second minute of the second half with a heart-stopping moment for the Scots.

Hallur Hansson’s swirling cross was dropped by Gordon at the feet of striker Joan Edmundsson. More surprised than anyone by the opportunity the striker fluffed a terrific chance to draw the Faroes level from 12 yards, Gordon gratefully flopping the ball at the second attempt with a rueful grin. He might have been the only Scot in the stadium smiling.

Fears of another night of humiliation at the hands of one of Europe’s minnows proved mercifully short-lived. 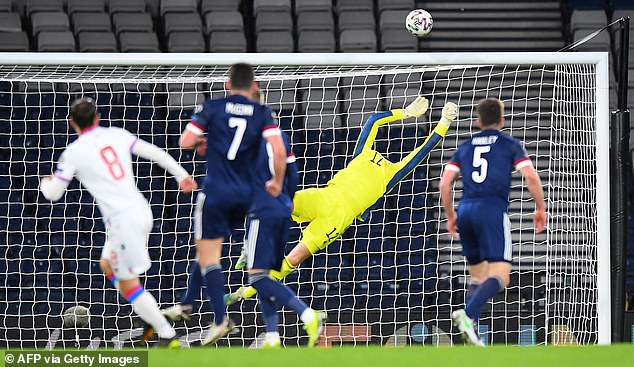 McGinn claimed his – and Scotland’s – second goal eight minutes into the second half with a terrific downward header from a peerless Tierney cross. For a little guy the midfielder gained impressive spring, the ball heading in from the minute it left his head.

Scotland could relax now. The dam was now well and truly burst.

A highly successful induction to international football for Che Adams was marked with the goal his intelligence and poaching deserved after an hour. The assist came from – who else? – Tierney, a piercing pass to the Southampton man granting time to turn his man 20 yards from goal and smash a low spearing right foot shot beyond the despairing dive of Nielsen for 3-0.

The game won, Steve Clarke had the luxury of making changes. In an emotional moment after the recent loss of his father, Hibs striker Kevin Nisbet was handed his international debut as a replacement for Lyndon Dykes.

Oli McBurnie, John Fleck, Scott McKenna and Liam Palmer also took to the field moments after Ryan Fraser ghosted in at the back post to score Scotland’s fourth goal with a downward header.

The winger’s third goal in his last three starts added to a growing air of optimism around Clarke’s attacking options. Ahead of a first major finals in 23 years this summer, it’s nice to have options.