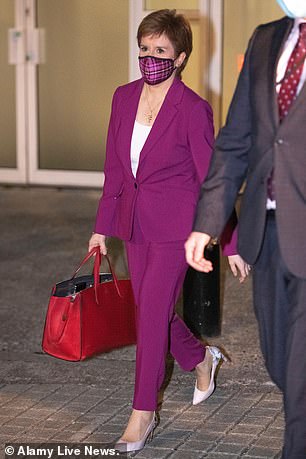 The Scottish government is spending 30 per cent more on public services per person than England thanks to its generous funding deal from Westminster.

The extraordinary gap has been highlighted in a report by a respected think-tank – despite Nicola Sturgeon moaning that Boris Johnson wants to deny her cash as she steps up her push to split the UK.

Ms Sturgeon unveiled a 4 per cent pay rise for NHS staff last week trolling ministers for saying that 1 per cent is the most that can be afforded after coronavirus wreaked havoc on the economy.

But a study by the Institute of Fiscal Studies (IFS) pointed out the huge gulf between funding levels with England.

For every £1 per person available for public services south of the border this year, there is £1.30 allocated north of the border – with the difference almost all explained by the Barnett formula used in the calculation.

The IFS also said the Scottish Government has chosen to use some of its temporary coronavirus funding to pay for permanent spending commitments – raising concerns that will cause problems when the crisis eases.

The briefing note said the Holyrood administration had received an additional £9.5billion from the UK Government in Covid-related funding. 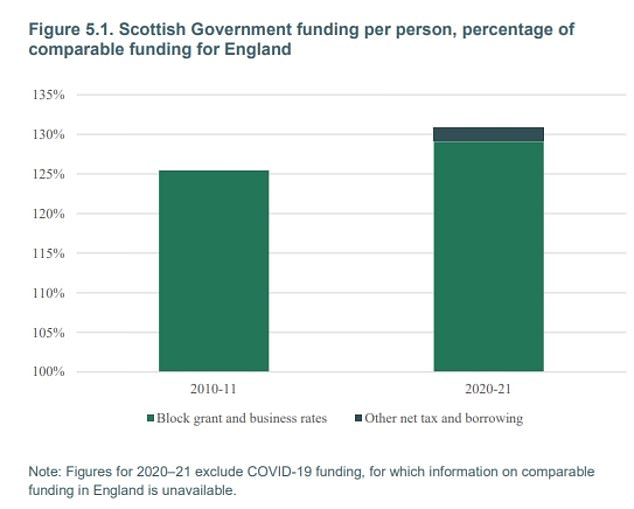 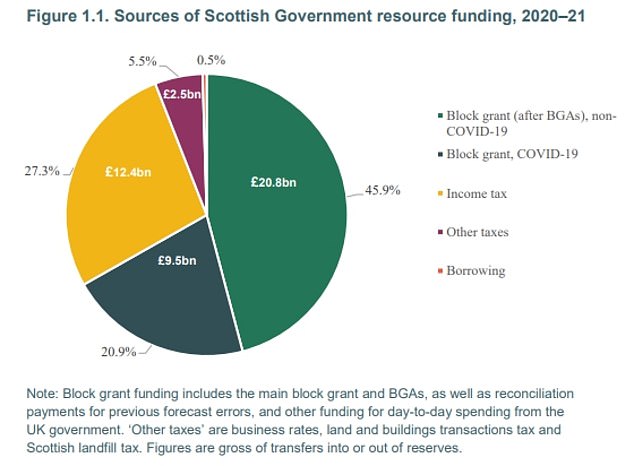 The IFS said that the overwhelming majority of Holyrood revenue comes from the block grant from Westminster, with efforts to raise more taxes from Scots only having limited effect

What is the Barnett Formula?

It is a system used by the UK Government to figure out how much funding should be given to the other home nations when it decides to spend more or less on something in England.

It was devised by the former Labour Chief Secretary to the Treasury Joel Barnett back in 1978.

While it has no standing in law it has now been used by the Treasury for more than 40 years to calculate funding figures.

Why is it so controversial?

The amount of money handed out to Scotland, Wales and Northern Ireland in the form of a block grant from Westminster is calculated based on population and what powers have been devolved from Whitehall.

In theory this should mean that spending should go up and down equally.

But the calculations are complicated and Scotland started with higher spending per head when the formula was first used which means that discrepancy is baked into the system.

The formula was only ever supposed to be temporary and even its architect said in 2014 that it was ‘unfair and should be stopped’.

Combined with a special funding guarantee, it said per capita coronavirus funding was likely to be higher in Scotland than in England for the next fiscal year.

But the IFS said not all of the extra funding was going to Covid-related spending, with some used to extend free school meals and free bus travel.

It warned that these would have to be funded from the core budget in 2022/23 and beyond, where money is likely to be ‘tight’.

About two-thirds of Scottish Government funding comes from the block grant it receives from the UK Government, but Scottish income tax will contribute 27 per cent and other Scottish taxes 5.5 per cent, with borrowing contributing the remaining 0.5 per cent.

The IFS found that the Scottish Government’s devolved taxes were contributing a modest but growing sum to its funding.

Plans suggest core funding will be about 3 per cent higher in 2021–22 than in 2010, but population growth means this is around 2 per cent lower per person.

The think tank has published its first briefing note ahead of the Holyrood election campaign, focussing on how funding has changed in recent years.

David Phillips, associate director at the IFS and author of the report said: ‘Excluding temporary Covid-19 funding, the Scottish Government has over £1.30 per person to spend on public services this year for every £1 of spending per person on comparable services in England.

‘This is almost entirely due to funding received from the UK Government via the Barnett formula, with less than 2p of the gap due to the Scottish Government’s borrowing and higher income taxes.

‘Indeed, the relatively weak performance of the Scottish economy means that the net revenues received from income tax have only increased slightly, despite tax increases in Scotland.’

‘They would have fallen relative to a world without tax devolution had those tax rises not been implemented, reminding us that devolution brings risks as well as opportunities.’

He continued: ‘Likely tight spending plans in Westminster could mean the next Holyrood administration will have to consider tax increases or cuts to some services – not least to pay for long-term policies on free school meals, public transport, council tax and mental health services, that this year will be paid for using temporary Covid-19 funding.’

Scottish Conservative economy spokesman Maurice Golden said: ‘The extra money Scotland gets through the Barnett formula in the months and years ahead will be key to saving jobs, supporting businesses, growing the economy and offering high-quality workforce training.

‘There is a risk though, the SNP’s divisive and unnecessary plan to hold another independence referendum this year would place a stake through the heart of Scotland’s economic recovery.’

However, SNP Finance Secretary Kate Forbes said: ‘While the Barnett formula does provide Scotland with slightly higher public spending per head than in England, it is already under attack by the Tories at Westminster, who have cut our capital budget by 5 per cent and stripped the Scottish Parliament of powers so they can engage in ‘pork-barrel’ spending through the so-called levelling up fund.’

Nicola Sturgeon came under fire last night over her plan to put a divisive independence referendum before the coronavirus recovery.

The SNP leader appeared flustered during the first televised leaders’ debate of the Scottish election campaign.

The First Minister faced an onslaught of dissenting voices as she confirmed that she plans to hold a fresh ballot on her bid to break up the UK within two-and-a-half years.

A rattled Miss Sturgeon even appeared to squirm when she was put on the spot over her plans for another vote, reluctantly committing to holding one in the first half of the next parliament, if elected. 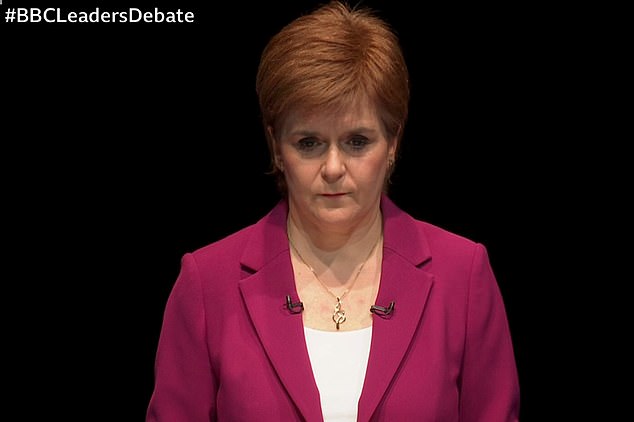 Opponents warned Scotland faces the threat of five years of ‘poisonous’ arguments between Miss Sturgeon and Alex Salmond if the SNP wins the election.

Scottish Tory leader Douglas Ross attacked her for putting issues including education and economic recovery ‘to the side’ in favour of independence.

He said: ‘The final piece of legislation that the SNP laid in front of parliament before the parliament rose for this election was one about independence, because it is their only priority, it is their political priority.

‘We have heard from the studio so far today it’s not the public’s priority and that is why Nicola Sturgeon is wrong and that’s why we can’t have a recovery when the SNP and the Scottish Government are only focused on another referendum.’

Answering questions from members of the public invited to take part virtually in the BBC debate in Edinburgh, Miss Sturgeon found herself on the rack over the constitution.

Nicola Sturgeon sparked fury last night after confirming she will push to hold a second independence referendum within the next two-and-a-half years.

The First Minister was challenged by voters on whether her focus was on the pandemic or on breaking up the United Kingdom.

While she said this was something the public should ‘judge’ for themselves, the SNP leader confirmed she will seek a divisive referendum in the first half of the next five-year Holyrood term – ‘assuming the crisis has passed’.

The First Minister added: ‘I’ll leave other people to judge if my focus has been on the pandemic or not over the past year.’ Scottish Greens co-leader Lorna Slater said her party would commit to a referendum in the next Holyrood term in its manifesto.

But Scottish Tory leader Douglas Ross launched a furious attack on Miss Sturgeon. He said: ‘Nicola Sturgeon has confirmed she would want a referendum in the next two years, when we are still dealing with this health pandemic. When we’re still trying to recover our economy, Nicola Sturgeon has confirmed to everyone tonight that the SNP will take us forward into another independence referendum if they get that majority.’

Scottish Labour leader Anas Sarwar said he wanted to ‘focus on what unites us as a country, not what divides us’.

One audience member, introduced as Selwyn, told her: ‘Nicola Sturgeon said to us she is focused on Covid and all that goes with it. If that’s the case how did she find time to put an independence bill through parliament while we are still suffering Covid? That’s not a focus.’

Another member of the virtual audience at the debate, introduced as Angelica, said: ‘Back in November 2020, Nicola Sturgeon was pushing for another independence referendum.

‘So is the focus really on the Covid recovery or is your focus on a referendum?

Scottish Liberal Democrat leader Willie Rennie said: ‘We will not get through this pandemic, and we will not get a recovery that benefits everyone if we are arguing amongst ourselves all the time.

‘We need to put the division, the exhausting arguments of the past, behind us and focus on the recovery.’ He added: ‘We know it will be a long, divisive argument. We’ve seen the arguments over the last few weeks with Alex Salmond over these issues.

‘I’ve seen a window into the next five years in the last few weeks – arguments over the constitution, strategy about independence; arguments between Nicola Sturgeon and Alex Salmond which have been poisonous and unpleasant. And what we need to do is to put all of that behind us and choose a different future.’

Scottish Labour leader Anas Sarwar was joined by members of other parties in quizzing Miss Sturgeon over her priorities.

‘I will leave other people to judge whether my focus has been on the coronavirus pandemic or not over the past year.

‘People have seen me literally every single day lead the country’s fight against Covid and I have spent literally almost every waking moment doing that, rightly and properly as First Minister.’ 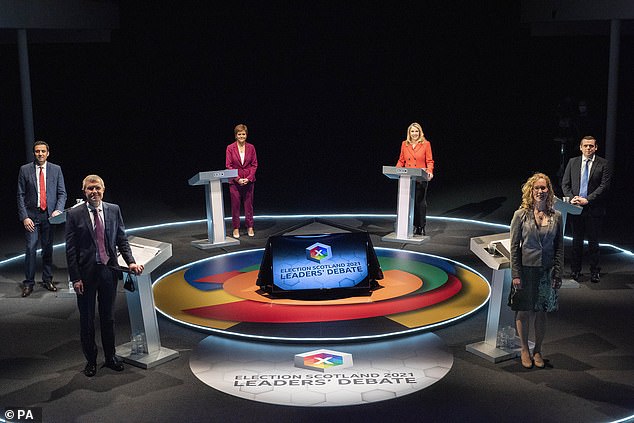 The leaders of the five main parties took part in the socially distanced debate, with a virtual audience asking them questions from home.

Other issues included strategy for the coronavirus recovery, education and health. Mr Ross also highlighted a pledge this week by Miss Sturgeon in an election campaign speech that all pupils in Scotland would receive a tablet device or laptop.

He said: ‘Does it really help young people who have been out of school for the last year to offer them a free device at the start of an election campaign rather than the start of a pandemic?’

Mr Sarwar raised concerns about the NHS north of the Border, and referred to a grandmother who has been told that she must travel to London for an operation to treat an aggressive form of cancer because of a ‘backlog’ in Scotland’s health service.

Mary Hudson, 69, was informed that she could not be treated here owing to health service capacity issues caused by a coronavirus backlog, and will instead be forced to endure an eight-hour journey from her home in Glasgow to the NHS Hammersmith Hospital in London.

The Scottish Labour leader said: ‘She [Mrs Hudson] had been diagnosed with ovarian cancer and been told by the NHS in Scotland that due to the backlog of Covid, they are not treating recurring cancers, and would only be treating first time cancers.

‘She has been forced to travel south in order to get that operation.’