Scots get freedom (for a haircut): Nicola Sturgeon confirms barbers and salons WILL open on Monday alongside non-essential shops for click and collect as Scotland eases out of lockdown

The move will allow Scots to get their locks trimmed from April 5, a week before barbers and salons in England reopen on April 12 –  as long as they have an appointment booked.

However it remains to be seen how many hairdressers will open their doors on Monday, which is Easter Monday and traditionally a bank holiday. Hairdressers in Wales have already been open a fortnight.

In a press conference today she also gave the go-ahead to retail shops to restart click and collect from the same date – but warned shoppers to stagger their journeys to avoid crowds.

Homeware shops and garden centres can welcome back customers in person.

The First Minister added: ‘We don’t want big crowds at these stores, so although they open from Monday, think about whether you really need to visit on Monday or if you’re able to wait until later in the week.’

The moves to kick-start the economy will come at the same time as an increase in students in college returning to in-person teaching for practical subjects, and outdoor sports can restart for youths aged 12-17. 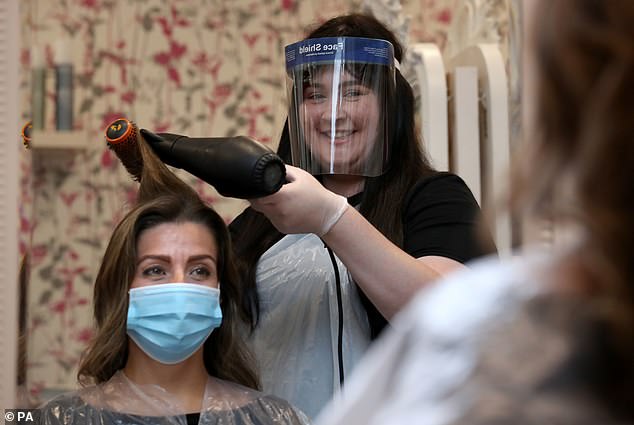 The move will allow Scots to get their locks trimmed from April 5, a week before barbers and salons in England reopen on April 12. Pictured: Salon manager Gemma Inglis works on the hair of Shireen Inglis at The Lunatic Fringe in Glasgow in July last year

Planned easing of coronavirus restrictions is to go ahead despite cases “plateauing” rather than continuing to decline, the First Minister said.

The latest coronavirus figures show 12 deaths and 411 positive tests were recorded in the past 24 hours.

It brings the death toll under this measure – of people who first tested positive for the virus within the previous 28 days – to 7,596.

Scotland will follow England and lift its ‘stay at home’ order on Friday and replace it with a request for people to ‘stay local’, Ms Sturgeon also confirmed. A similar measure came into force in England on Monday this week.

The change was announced earlier this month and confirmed during the coronavirus briefing on Tuesday.

The First Minister said: ‘The stay at home rule is being replaced for the next three weeks at least with a requirement to stay local.

‘That means the current travel restrictions, which prevent non-essential travel outside your own local authority area, will remain in place for another three weeks.

‘I fully understand how frustrating that is for everybody – I share that frustration – like many of you, my family live in a different local authority to the one I live in, and so like anyone with loved ones in a different part of the country, I desperately want to see them in person.’

The First Minister said she will give further updates in April but that Scotland is on course to ease restrictions further, with cafes, restaurants, shops and gyms due to open from April 26 and more people allowed to meet up outdoors.

NASA/JPL named two sites on Mars after an author and an engineer. Here's why you should know them, too.