A woman who worked on Sex and the City as actress Kristin Davis’ stand-in has spoken out about the ‘harassment’ and ‘humiliation’ she was subjected to on set – revealing how the ‘toxic behavior’ she faced during her four seasons on the show made her quit Hollywood for good.

Heather Kristin, 47, from New York, opened up about her experiences in several personal essays, detailing how her dream job of working on a major TV show quickly turned into a nightmare thanks to the many instances of ‘harassment’ she witnessed and experienced during her time on the show.

Kristin, who has an 11-year-old daughter, recalled one particularly painful incident when members of the crew duct taped her feet to the stirrups of an examination table while she was preparing for a scene in which Davis’ character Charlotte visits her gynecologist. 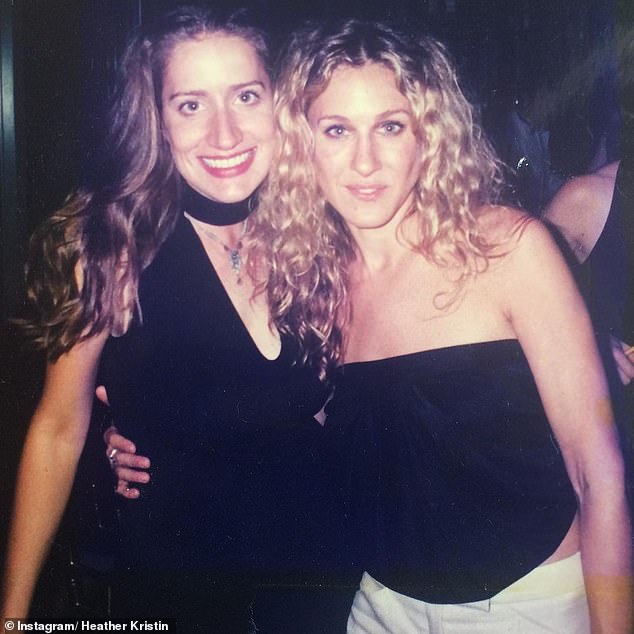 Heather Kristin, 47, who worked as a stand-in on Sex and the City, says she was ‘harassed’ and ‘humiliated’ on set (pictured with star Sarah Jessica Parker) 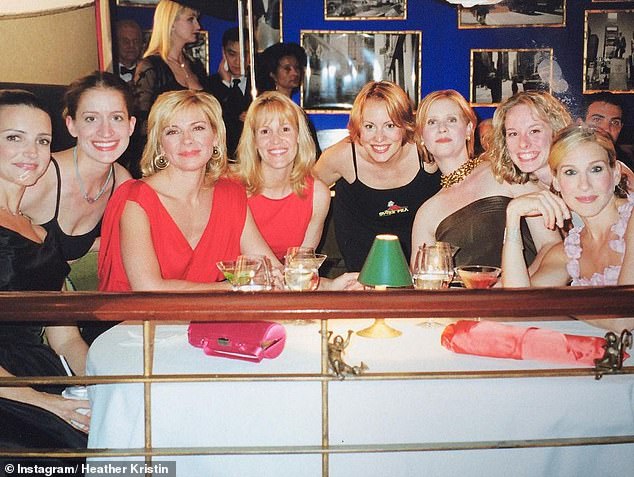 ‘Toxic’: The New Yorker was the stand-in for Kristin Davis, who played Charlotte (seen together left with the other stars and stand-ins), and she worked on the show for around four seasons

The one-time Hollywood stand-in – who was given the job after routinely turning up at the casting director’s office and asking for a part – explained in an essay for Glamour that she was embarrassed at the prospect of even having to spread her legs and put her feet in the stirrups in the first place, admitting that her ‘cheeks burned’ as she got into the compromising position.

According to Kristin, who was fully clothed at the time, she fell asleep while sitting in the chair, having worked a 60-hour week, and when she woke up, she found several crew members taping her feet to the stirrups and laughing at her.

They then proceeded to mock her, make ‘crude comments about her body’, and take pictures of her while she remained taped to the chair. 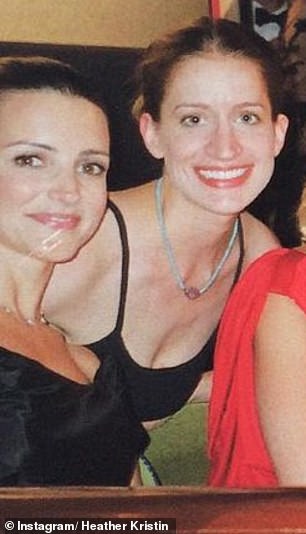 Upset: Kristin got the job after begging the casting director to employ her, having been told by a friend that she looked like Davis

‘I awoke to the sound of masking tape,’ she revealed. ‘One of my feet had been taped to the stirrup and a crew member was taping the other, smiling and laughing. I was horrified.

‘Another crew member took photos of me in this position from the video monitor. A handful jeered at me. I wanted to scream. I wanted to rip my feet out of the tape and jump off the table.’

However, Kristin says she was afraid of what would happen if she made a fuss or complained, revealing that she couldn’t afford to lose the regular paycheck that the job provided her with, or the Screen Actors’ Guild health insurance that came along with it.

So, she made ‘funny faces’ and tried to ‘pretend that she wasn’t humiliated [and] scared’, but she shared that she knew the incident would ‘haunt her forever, especially at annual doctor visits’.

‘As soon as I could, I retreated to a quiet place, my 12-foot-by-12-foot rent-controlled studio apartment on New York’s Upper West Side,’ she continued.

‘I couldn’t afford to quit, and I worried that if I complained I would be fired. So I kept it a secret. I felt the heat below my skin burn. I alternated between chain smoking and puking.’

After that experience, she says she began avoiding the ‘catered lunch’ at the studios in an attempt to steer clear of the crew, and instead began practicing the violin during her spare time – however the stress caused her to lose 15lbs, she wrote in The Independent.

‘I stayed and remained silent on the set,’ she said. ‘I began avoiding the catered lunch upstairs at Silvercup Studios. Instead I brought my violin, practiced on an empty lot, and lost 15 pounds. For years, I stood in for the stars. I never stood up for myself.’ 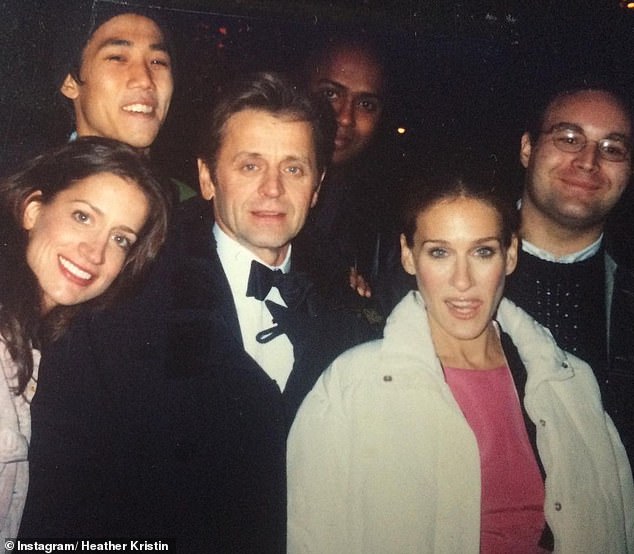 Shocking: Kristin (seen left with Mikhail Baryshnikov, Parker, and other cast and crew) says members of the crew made ‘lewd’ comments about her body and her sex life 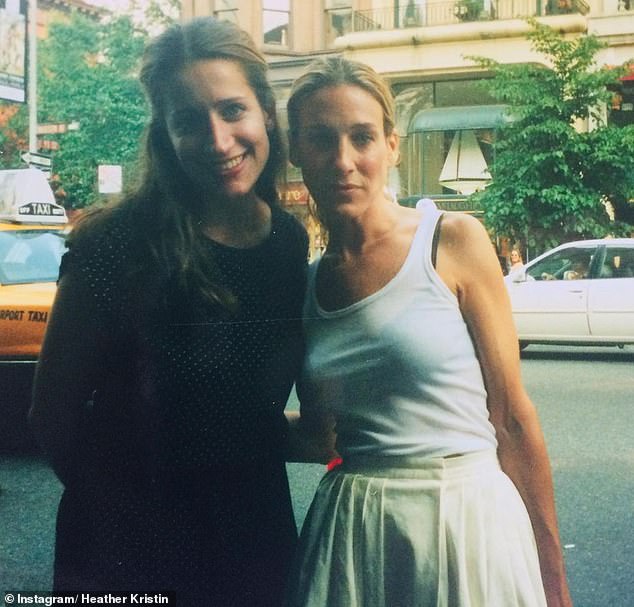 The final straw: The most upsetting incident for Kristin was when crew members pranked her by taping her feet to the stirrups of an OBGYN chair, then took photos of her her

The incident, which took place when the cast and crew were filming Season 4, Episode 2 of the show, proved to be the final straw for Kristin, who says that she quit the job soon after and ‘gave up her career’ as a stand-in once and for all.

‘After this incident I realized that being an actor wasn’t a healthy career choice for me. So I started looking for another path,’ she wrote in Glamour.

While the duct taping prank was the most severe example of the ‘toxic behavior’ that Kristin says she experienced on set, she claims it was by no means the only instance of ‘harassment’ or ‘humiliation’.

She also accused crew members of ‘cracking unprompted jokes about having a boob job’ – which she insists she had not – and even ‘suggested she had given blow jobs to a colleague who was in a position of power’.

In a piece for HuffPost, Kristin also recalled being told by ‘a crew guy’ that her ‘nose was too big for the screen and that was why she never got a speaking part on the show’, while another crew member complained on Kristin’s first day on set that she was ‘an inch taller’ than Davis and therefore ‘shouldn’t have gotten the job’.

She also says she witnessed other people on set being subjected to abusive behavior and harassment, referencing one incident when a black extra was left in tears after a crew member made racist comments about her.

Kristin revealed: ‘She had tears in her eyes. I asked her what was wrong. “A crew guy asked if I was in a gang,” she told me. “Then he told me to go get him some fried chicken.”’

In addition to the ‘harassment’ she faced and witnessed on set, Kristin says the job was also incredibly draining, revealing that she often worked 60-hour weeks, and was frequently ‘sleep deprived’ after spending 16-hour days on set.

Kristin says she has considered speaking out about her experiences in the past, particularly when the Me Too movement began gaining traction, however she ‘told myself that none of it compared to what other women in the industry have been through’.

‘So I remained silent and faded into the shadows, leaving my stand-in days ― and the harassment I experienced during them ― in the past’ she wrote on HuffPost.

HBO issued a statement to Glamour about Kristin claims, saying: ‘We have always taken seriously our responsibility to create a safe environment for everyone working on our productions, and we are very disappointed to learn of Ms. Kristin’s experience 20 years ago.’

The experiences don’t seem to have deterred Kristin from returning to the small screen however – and she is currently calling for Parker to offer her a guest role in the upcoming reboot of Sex and the City, And Just Like That…, which will air on HBO Max.

‘It would be a full circle moment & make amends to be invited back for a guest appearance!’ she wrote in an Instagram post while tagging both Parker and HBO.

In another, she added: ‘@sarahjessicaparker we could make amends by having me return with a guest spot where I play violin!’

In her essays, Kristin did note that there were also plenty of positive experiences while she was working on the show – particularly when it came to her interactions with stars like Davis and Sarah Jessica Parker. 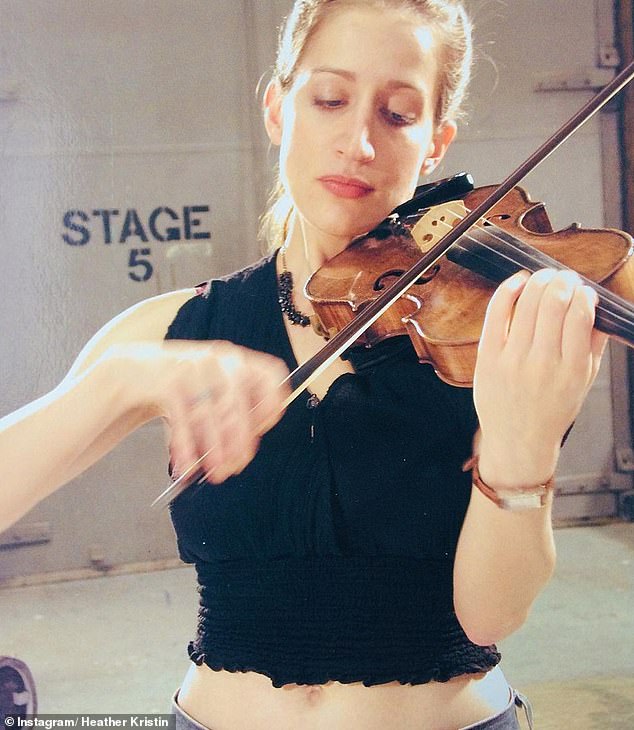 Surprise: Despite the negative aspects of working on the show, there were some wonderful moments, including when Kristin got to play the violin in a scene outside Lincoln Center

She recalled Parker sending her roses and a ‘sweet note’ after she performed at ‘Amateur Night at the Apollo’, and says that Davis once offered her a ride home in her town car, and then gave her a blue silk dress that Kristin still treasures to this day.

Kristin also had the opportunity to show off her musical talents on the show and fulfill a childhood dream of performing the violin at Lincoln Center when she was asked to play as part of a string quartet during a scene when Parker’s character Carrie and her beau Aleksandr Petrovsky, played by Mikhail Baryshnikov, run into the theater.

‘It was a night shoot across from the Metropolitan Opera House at Lincoln Center,’ she recalled.

‘Sarah Jessica Parker wore a dark pink Oscar de la Renta dress and Baryshnikov a tux. In the scene, SJP and Baryshnikov dashed past me as my quartet and I played Aleksandr Borodin’s String Quartet Number Two in D: II, Scherzo.

‘Hours later, we wrapped before sunrise. I walked back home to 72nd Street. I passed the bar where I had seen my first episode, and marveled that my childhood dream of performing at Lincoln Center had finally come true.’

Interestingly, Kristin was not a fan of the show when she first applied for a role as a stand-in; at the time, she didn’t own a TV, didn’t have access to cable, and says she had only seen part of an episode when it was playing in a bar. That moment was enough to hook her though.

‘One night, at a bar with big windows, a group of 30-somethings wore sparkly dresses and drank out of martini glasses. On the overhead TV, Sarah Jessica Parker smoked on her bed like me. Transfixed, I entered and watched,’ she wrote in her essay for The Independent.

Describing Parker’s character as ‘smart, witty, enterprising and curious’, Kristin says she felt that she also possessed ‘some of those qualities’, having grown up in Hell’s Kitchen and ‘been homeschooled by a single mom on welfare’.