There’s not much laughter around at the moment, and as a result of Covid lockdowns, the stress everyone has been under and the ongoing uncertainty of the virus, we continue to struggle. Soapland, like real life, isn’t exactly a bundle of laughs, but everyone on the shows is really doing their best to continue to bring us entertainment, even when the storylines are heavy.

Emmerdale’s Bernice (Samantha Giles) can deliver a laugh-aloud line like no other (her recent lie about loving all things Scottish in the hope of pulling Mack was a masterclass in comic timing). EastEnders’ Phil and Kat are turning into the show’s great double act (and, yes, I’m still predicting a Christmas wedding – they just need Alfie to fall off the map). And in Corrie, despite the recent devastating storyline of Seb’s murder and Nina’s attack, there is still room for laughter, not least with Sally (Sally Dynevor) and Jenny (Sally Ann Matthews), whose facial expressions alone deserve their own acting prizes.

So, as we continue to struggle with PCSD (Post Covid Stress Disorder), let’s hold on to this bit of security that is forever soapland.

CORONATION STREET: ON THE BEAT 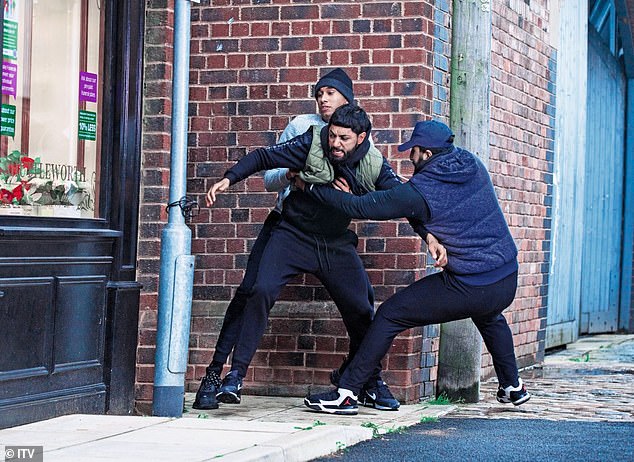 In celebration of Zeedan’s return, she plans said family meal, impervious to the fact that outside Speed Daal, two thugs beat up Zeedan (pictured) and leave him in the ginnel

‘Grace by name, disgrace by nature.’ Aggie to Ed, Corrie

Maybe Yasmeen has never watched EastEnders, or else she would have known that when a ‘fairm-ly meal’ is organised, disaster ensues. Sure enough, in celebration of Zeedan’s return, she plans said family meal, impervious to the fact that outside Speed Daal, two thugs beat up Zeedan and leave him in the ginnel. Have you noticed how all attacks take place in the ginnel, by the way? And where’s Craig, the ubiquitous copper, when you need him? Oh, hang on, there he is: taking a statement from Zeedan about the attack. I tell you: the squad trying to hunt down Jack the Ripper never worked as hard as our Craig.

It’s a sad week as the Street says goodbye to Norris, one of the greatest characters in the show’s history. Hold on to your hats, because there’s a real showstopper at the funeral, when a letter left by Norris reveals that Rita used to have her hair surreptitiously coloured by Claudia. Somebody pass Audrey the smelling salts!

The Ed/Aggie/Grace debacle has no end in sight, with Ed and Aggie whingeing that Grace has them over a barrel. If only she had them in it, then we could stop this tedium. 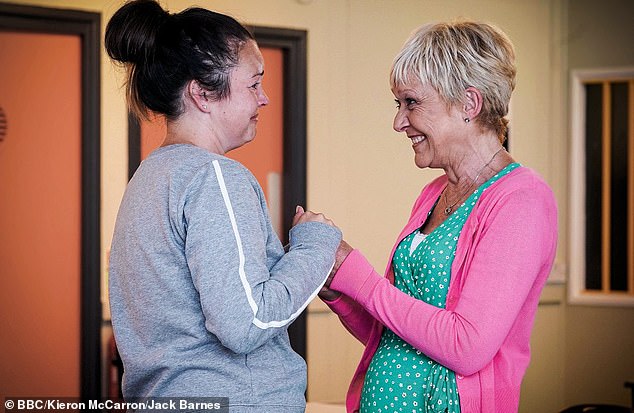 How will Stacey react when Jean (pictured, with Stacey on the left) tells her Ruby has come clean?

How has Stacey managed to get her hair coloured in prison? It’s darker now than when she went in, so unless I’ve missed the Vidal Sassoon glam squad sneaking in, something is amiss. Still, Jean is happy enough to see her (and not many people ever are, given her history). How will Stacey react when Jean tells her Ruby has come clean? Worse, for Martin, what lies in store for him following this bombshell? Methinks he’ll be selling apples on the stall for at least another two decades.

‘Next time I ’ave a pie, you’ll be in it.’ Evelyn to Tyrone, Corrie

There’s happier news on the relationship front when Kaffy and Rocky rekindle their romance. Let’s be honest, they have to; there’s precious little else in the way of ageing totty in the Square. With Honey having cornered the toyboy market with Jay (and even a whole other market after Suki made a pass at her), there are very few potential romance candidates all round.

Mick is about to sign Linda’s baby’s birth certificate to establish himself as the legal father, but Rainie has other ideas. When Nancy spots flyers revealing the truth, Mick threatens an all-too-smug Rainie. Jeez! I wouldn’t trust Rainie with a Barbie doll for five minutes, let alone a real live infant.

The farce that is Whitney’s musical career drags on, when she reaches the final… of what, I have no idea; I lost the will to live the second she picked up a microphone.

EMMERDALE: NOT SO SWEET CHARITY 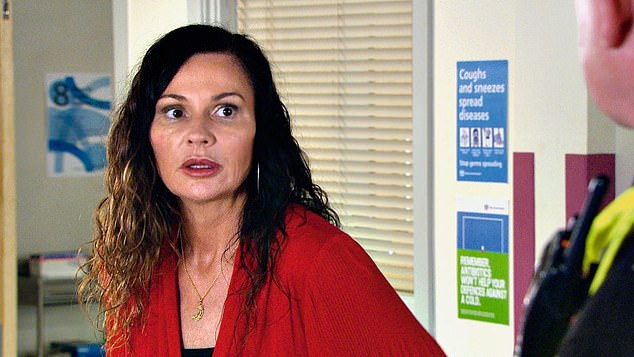 Are there more criminals per square inch in Emmerdale than the rest of the UK – or the world, come to that? Is there anyone who hasn’t been held hostage, bundled into the back of a car, tied up in a barn, et al? Now, Charity is attacked by an intruder after the external mains cable at The Woolpack is severed. At the hospital Chas reveals Charity has a bleed on the brain – yes, she has one. So, what’s the motive behind Cablegate? Is Marlon’s chicken pot pie not up to scratch?

Elsewhere, Diane’s date Michael is more interested in his jigsaw than her. What can I say? It’s a slow week.