A teenage soldier has suffered ‘life changing’ burns, wounds and ‘mental trauma’ after he was assaulted and allegedly abducted whilst on a tinder date.

Cobhan Mclelland, 18, who is being treated in hospital for his injuries, had arranged a ‘Tinder meet up’ with a woman at a property in Edinburgh in the early hours of Sunday morning.

On arrival at the address he was allegedly ‘abducted’ by a man who reportedly assaulted him and refused to let him leave the premises.

Dylan Rigby, 19, has been charged in connection with the alleged incident.

Rigby appeared in court today charged with abduction, assault to severe injury, danger of life and attempted murder, the Daily Record reports. He is due to appear again within the next eight days.

A Police Scotland spokesperson said: ‘Officers were called to an address in Kidlaw Close, Edinburgh, at around 6.05am on Sunday, 21 March following a disturbance within a property. 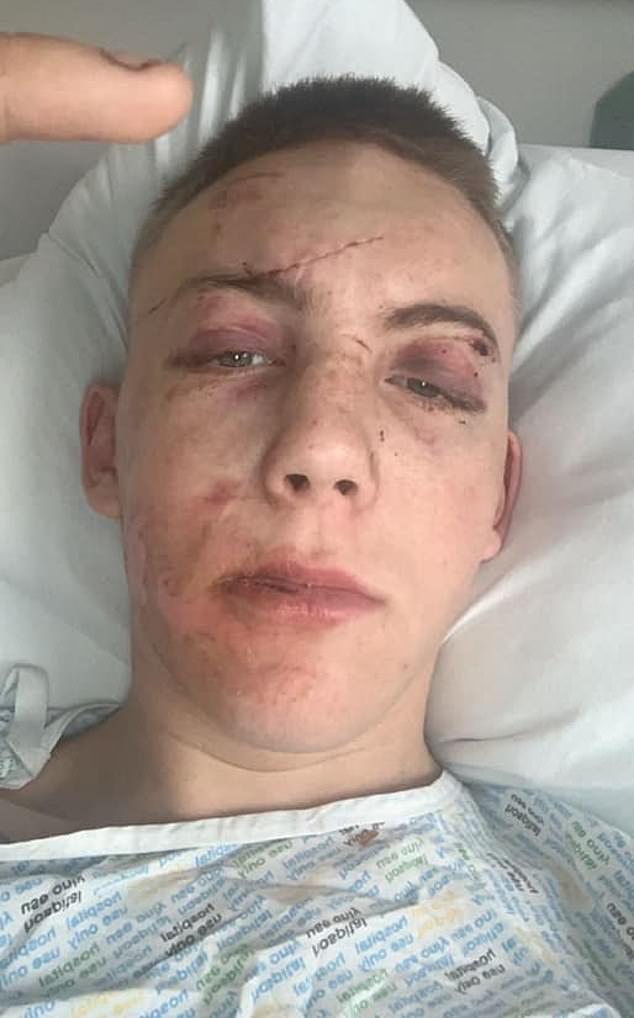 Cobhan Mclelland, 18,  soldier living at Dreghorn Barracks in Colinton has been left ‘scared to close his eyes and sleep at night’ after he was allegedly held hostage after meeting Tinder date

‘Specialist officers attended and the incident was concluded safely at around 8.05am.

‘An 18-year-old man was taken to hospital after being assaulted, and a second man, also aged 19, has been arrested and charged in connection with the incident.

‘He was due to appear before Edinburgh Sheriff Court on Monday, 22 March, and a report will be submitted to the Procurator Fiscal.’

The family of Mr Mclelland say they received a ‘devastating phone call’ on Sunday morning to say that the soldier, who lives at Dreghorn Barracks in Colinton, had been taken to a high dependency unit in Edinburgh. 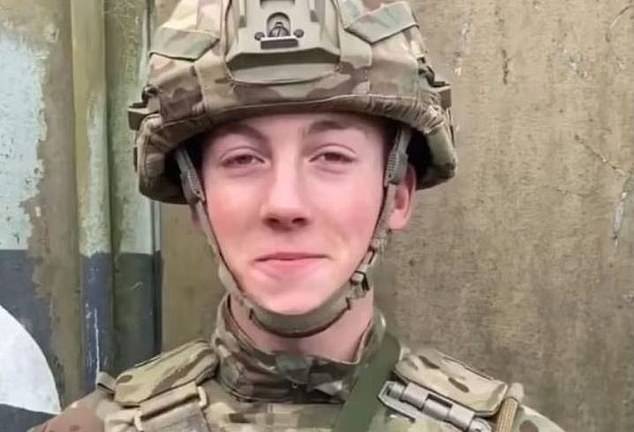 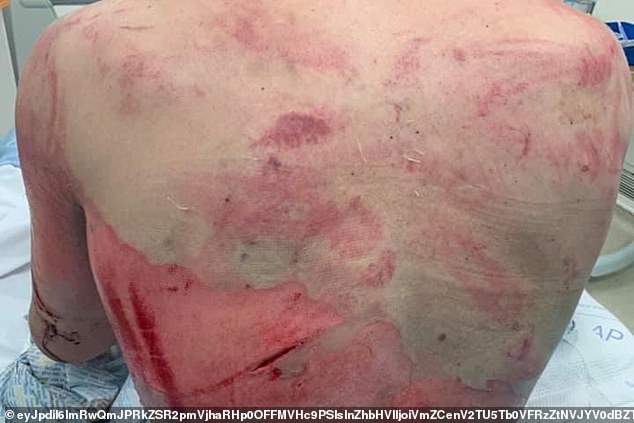 A GoFundMe page has been set up to raise money to help the teenager through the ordeal, with the family sharing pictures from the alleged attack (pictured) 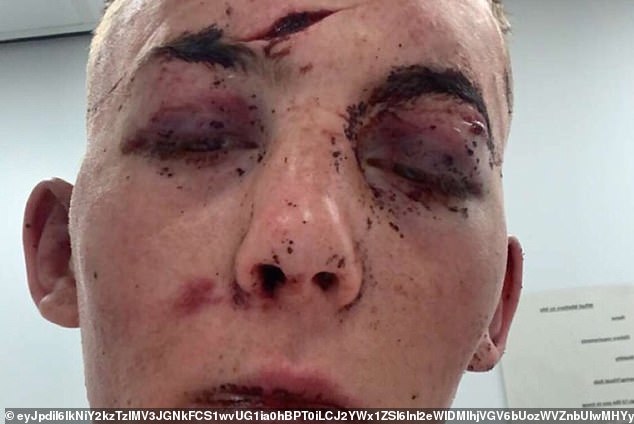 Mr Mclelland’s family wrote on the fundraising page that the teenager would have to live with ‘scars to last a lifetime, both mentally and physically’. Pictured: Mr Mclelland’s injuries

Mr Mclelland is said to have experienced ‘life-changing trauma’ after the ordeal and is receiving specialist care for both wounds and burns.

The teenager, who is understood to originally be from Doncaster, joined the military at the age of 16, turning 18 in January. The family say the traumatised squaddie ‘had his whole career ahead of him.’

A GoFundMe page has been set up to raise money to help the teenager through the ordeal, with the family sharing pictures from the alleged attack.

An appeal reads: ‘Our Son/Grandson/Brother has the kindest soul so we’re devastated to see the pain which he is in. 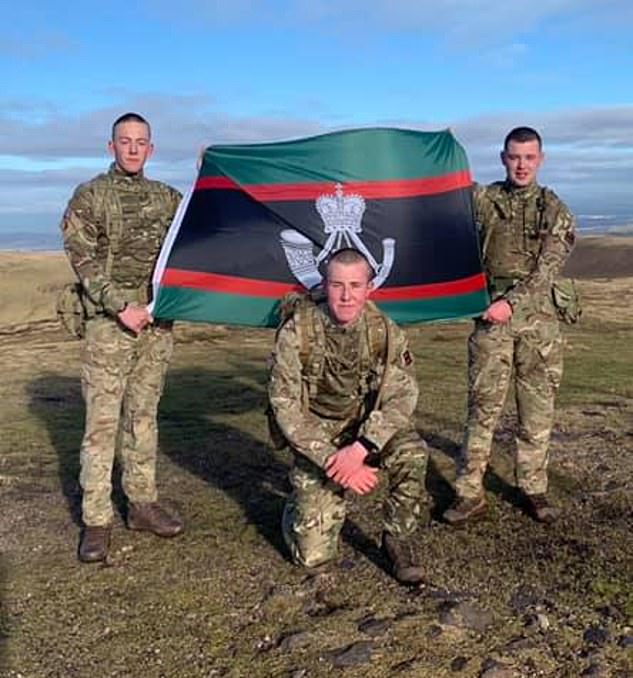 Mr Mclelland (left) who is being treated in hospital for his injuries, with fellow soldiers

‘Cobhan will now live with scars to last a lifetime, both mentally and physically. To help Cobhan, he is going to need counselling and lots of therapy.

‘Although we are so lucky that Cobhan is still alive and here with us today, we’re also in great pain knowing the long road ahead of us. 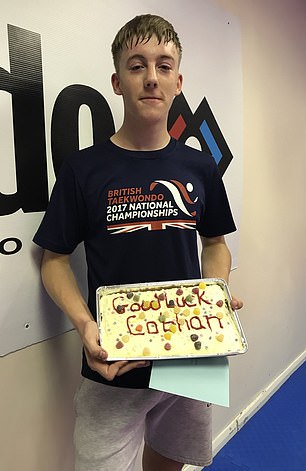 Mr Mclelland, who is understood to originally be from Doncaster, joined the military at the age of 16

‘We’re aiming to raise money to help towards any therapy which Cobhan may need as there is a very high chance Cobhan may suffer with PTSD from this horrible event.

‘Please help and share in any way you can. Our Family & Cobhan will forever be grateful.’

A source close to Dreghorn Barracks said fellow servicemen and women were told of the attack during a meeting at the army base on Monday.

It is understood the incident triggered emergency protocol with top brass informed.

A spokesperson from the Ministry of Defence confirmed that the teenager was taken to hospital after an incident at an Edinburgh property and that police are investigating.

The spokesperson added: ‘We can confirm that there was an incident involving a serviceman and a civilian in the early hours of Sunday morning.’

‘The serviceman was taken to hospital and police are investigating the incident.’