St Helens 29-6 Salford: Champions get off to a flying start as they begin defence of their Betfred Super League title with a convincing Friday night victory

By David Kent for the Daily Mail

St Helens ran in five tries as they got their Betfred Super League title defence off to a convincing start with victory over Salford.

The 2021 season kicked off behind closed doors at Headingley with a repeat of the 2019 Grand Final and the same outcome as Saints condemned their former assistant coach Richard Marshall to defeat in his first match as Red Devils boss.

Salford, who had five players making their debuts, trailed only 13-6 until the champions cut loose with three tries in the final quarter. 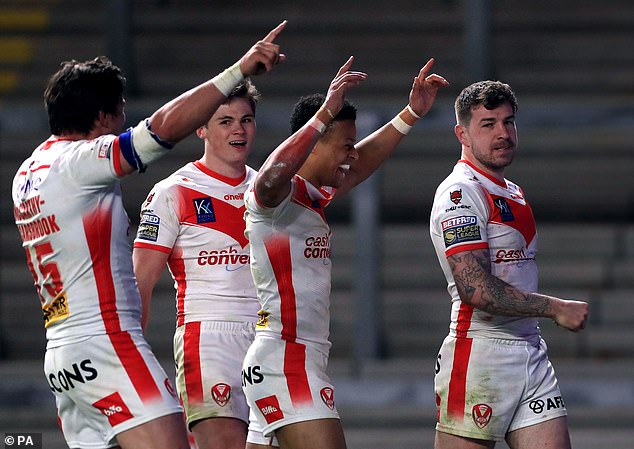 Saints coach Kristian Woolf handed debuts to all three of his overseas signings, Joel Thompson, Sione Mata’utia and Agnatius Paasi, although the latter’s involvement was curtained by a head knock.

Taking on the goalkicking duties in the absence of Lachlan Coote, Makinson landed the touchline conversion to make it 6-0.

With Fages and Jonny Lomax orchestrating the attacking threats from Saints, the champions piled on the pressure and Makinson (right) stretched the lead with a penalty.

Then six minutes before the break a mistake by Kallum Watkins let when Lomax swooped on a loose ball after Kallum Watkins lost possession inside his own 20-metre area and gotleft winger Regan Grace in for his side’s second try and 20-year-old Jack Makinson could not add the goal this time but Welsby nudged his side further ahead on the stroke of half-time with a first Super League drop goal.

Salford had their moments, with evergreen Kevin Brown probing and prompting, but they lacked composure near the line and made too many handling errors to subject the Saints defence to sustained pressure. 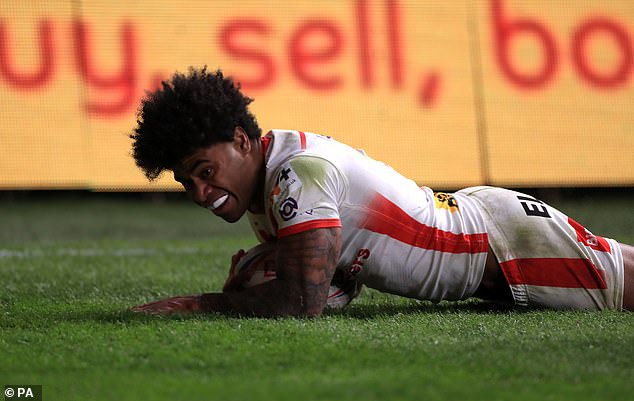 Kevin Neiqama was one of the try scorers for the hosts, who earned a comfortable win

St Helens lost Paasi within a minute of the restart after he knocked himself out attempting to stop Salford powerhouse Pauli Pauli andSt Helens’ grip on the game was threatened briefly when the Red Devils grabbed their only try.

Salford pulled the Saints defenders into the middle and stand-off Tui Lolohea’s long, looping pass enabled Ken Sio to cross unopposed for a try that Krisnan Inu converted to make it 13-6.

However, Saints were never seriously threatened after that and Mark Percival leapt high to collect another Fages kick and score his first try since the 2019 Grand Final.

Percival’s celebrations were short-lived as he hobbled off the field soon afterwards but Makinson’s third goal restored his side’s two-score advantage and — as Marshall’s men tired — Saints turned on the style.

Centre Kevin Naiqama pounced on a handling error by Inu to scored a fourth try and prop Alex Walmsley charged through for a solo score to round things off, with Makinson taking his goal tally to four from six attempts.