Ten of the world’s most incredible tennis courts, from a remote Scottish island to the Arizona desert and one that ‘floats’ in paradise

By Shannon Thaler For Mailonline

It’s not just the grand slam courts that are showstoppers in the world of tennis.

We’ve scoured the planet and found 10 tennis courts in unlikely places that all have (or had) the wow factor.

For instance, there’s the jaw-dropping court on the paradise Emerald Cay Estate island in Turks and Caicos, which appears to float on the water; the remote tennis court on Scotland’s Isle of Harris, and the regulation-size court that hotel guests can use that’s been laid out on a rocky cliff face on Italy’s breathtaking Amalfi Coast.

There are also courts in the Arizona desert and in the middle of the African wilderness.

We also discovered some mind-blowing ‘stunt’ tennis courts – such as the one that appeared 692ft up on the helipad of the Burj Al Arab hotel.

Scroll down for pictures of courts that are undeniably ace. 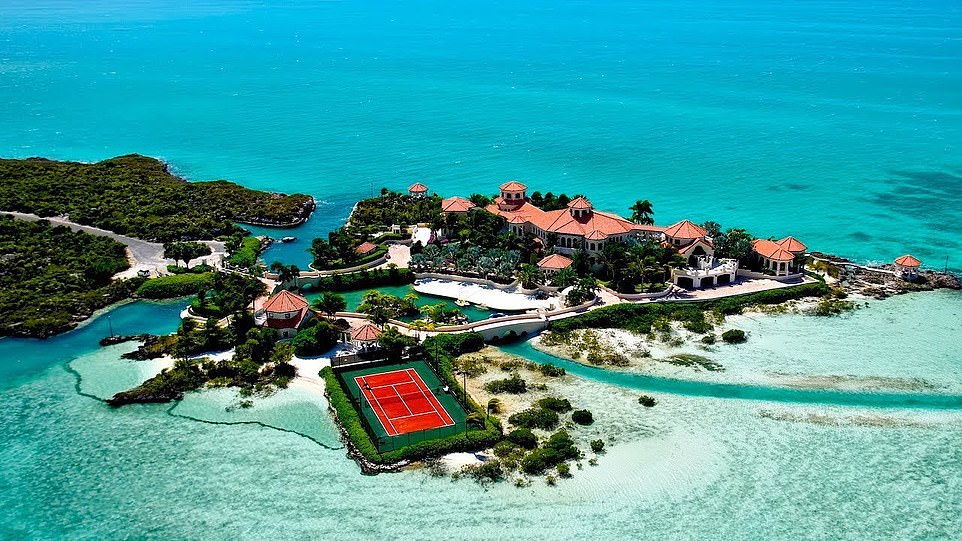 Practice for a pretty penny – in paradise: A stay on the jaw-dropping Emerald Cay Estate island in Turks and Caicos costs a whopping £25,874.09 ($35,714) a night. But for that princely sum guests can work on their shots on an incredible tennis court that almost seems to float on the water. And after a few rallies they can relax in one of eight bedrooms, sip wine from a 6,000-bottle cellar or lay out in the sun on one of two perfectly formed beaches. Visit www.islandescapestci.com/villas/emerald-cay 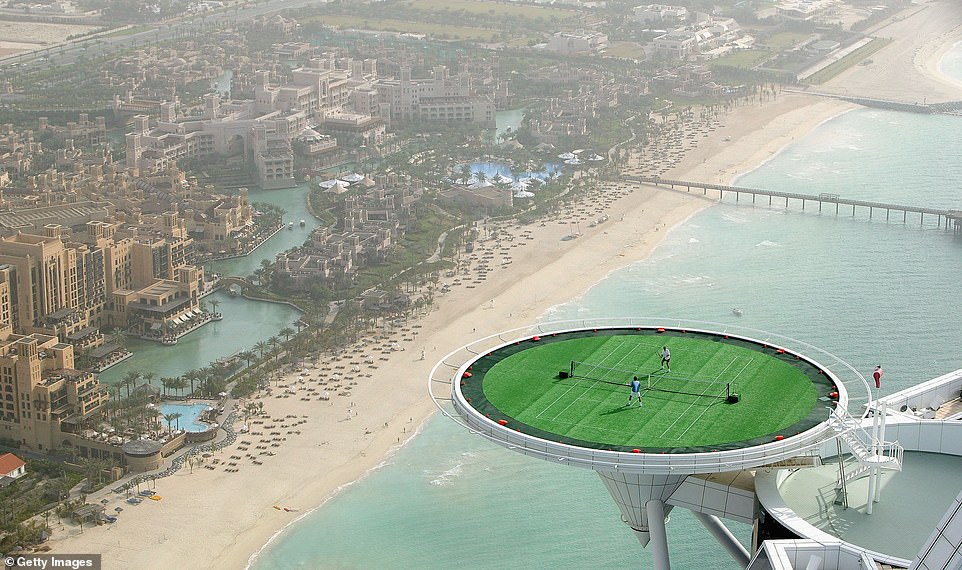 Dubai’s striking Burj Al Arab hotel created the loftiest tennis court in the world in 2005 – on its 211m- (692ft) high helipad. The temporary court was constructed ahead of the Dubai Duty Free Men’s Open and former Wimbledon champs Andre Agassi and Roger Federer were invited to break-in the grass and play a match on it. Federer described the experience as ‘unbelieveable’ 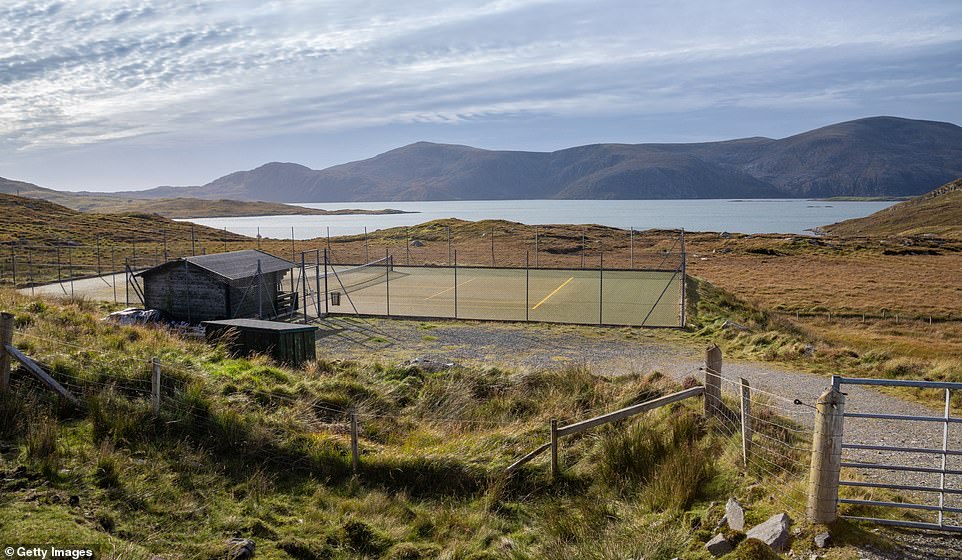 Remote rally: Bunabhainneadar tennis court on Scotland’s Isle of Harris is one of the most isolated in the world. It was built with £62,000 and 2,000 tons of rock from the Clisham which, with a height of 799m (2,621ft), is the highest mountain on Harris. The court overlooks Loch Tarbet and has attracted visitors such as former British number one Tim Henman and Andy Murray’s mother, Judy, who said: ‘Sheep on the court is your only hazard’ 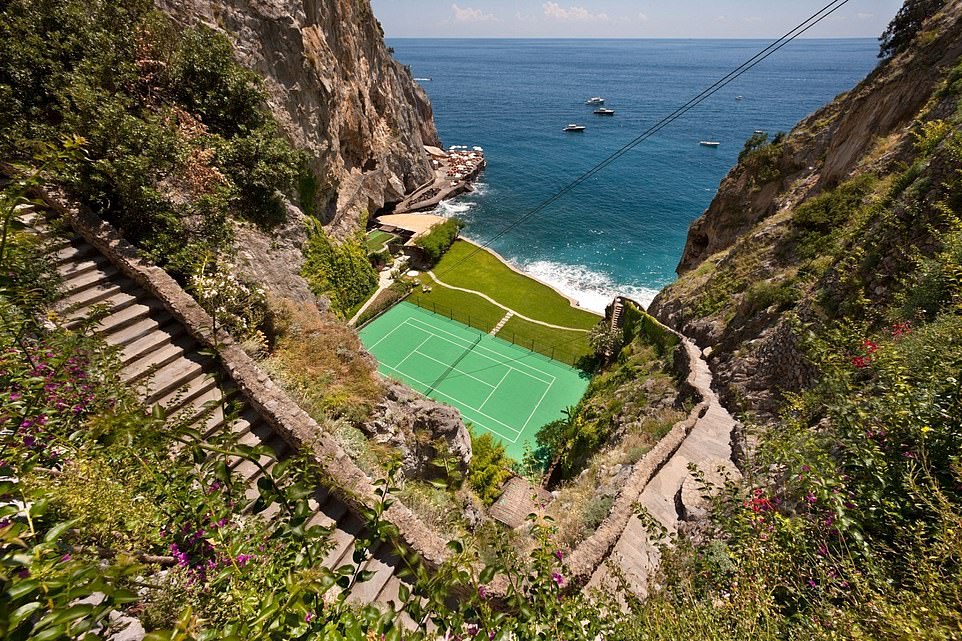 Serve a sea view: Guests at Il San Pietro Di Positano, a luxe resort built on a cliff face on Italy’s stunning Amalfi Coast, can descend 384 steps from the main building and play on a regulation-sized tennis court overlooking the Mediterranean 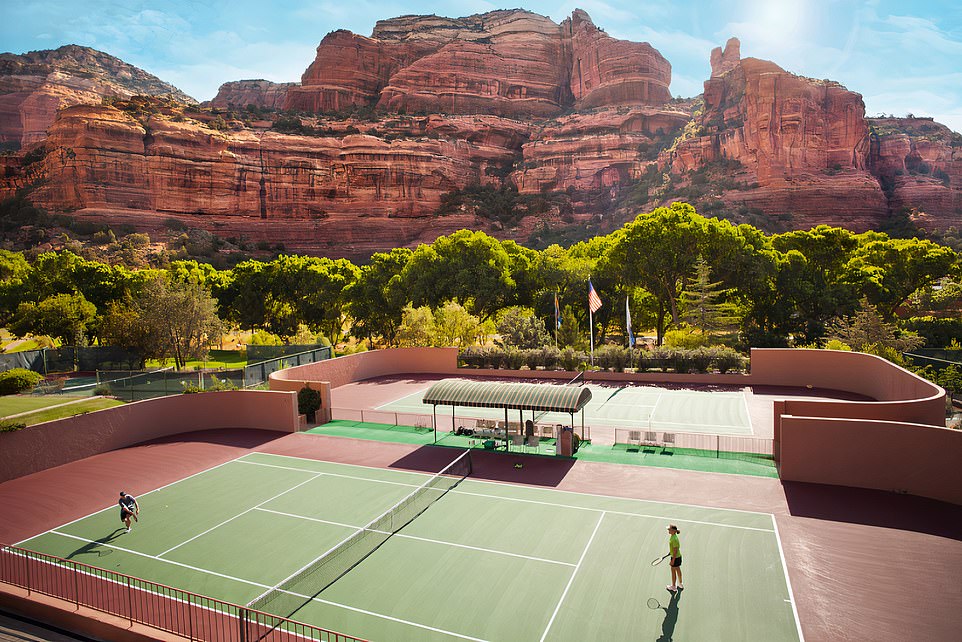 Fancy doubles in the desert? Book into Enchantment Resort in Sedona, Arizona, and you can play on three courts against a backdrop of the towering red rocks of Boynton Canyon. The hotel says its courts are available for casual games and that tennis pros and experts offer instruction from beginner to advanced levels 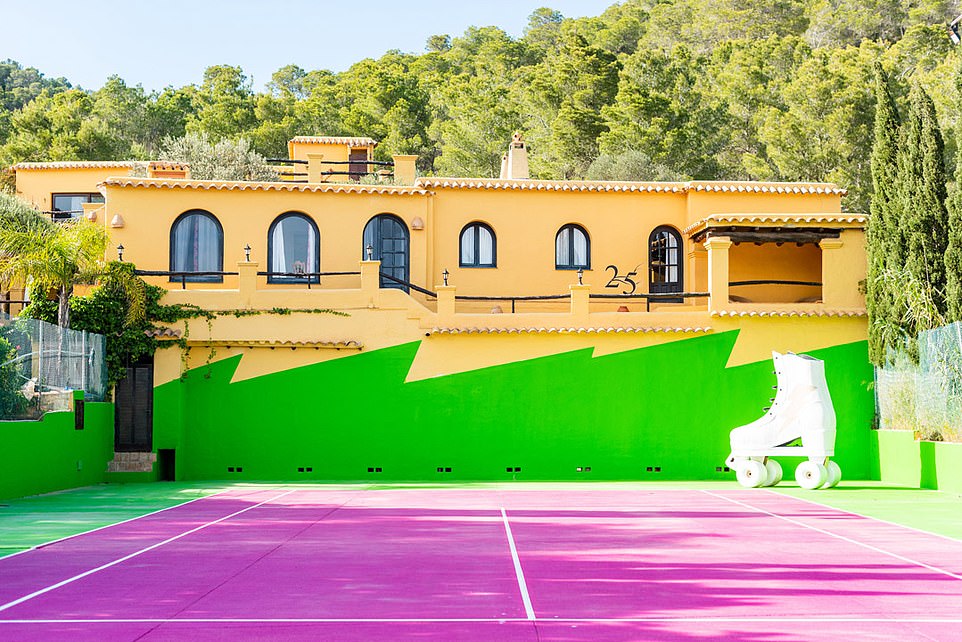 Grab your racket and sunglasses for a knockabout on the dazzling neon-pink tennis court at the legendary Pikes Ibiza hotel, which randomly features a giant climbable roller skate in one corner. It’s just one of many eclectic design elements and Instagram-worthy photo-ops at the hotel, whose past guests include George Michael, Freddie Mercury, Idris Elba and Zoe Ball 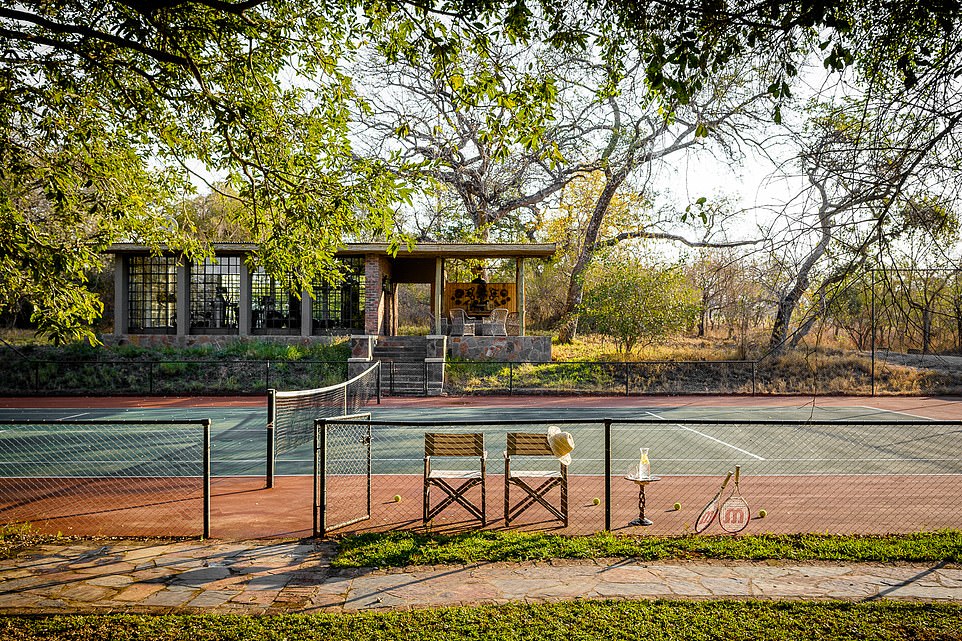 And the crowd goes wild! If you fancy a match set in the timeless wonder of the untouched African wilderness book a stay at Singita Castleton in Tanzania, which has a tennis court and pavilion in its tranquil grounds. Players can cool down afterwards in the nearby swimming pool. Stays cost from ZAR 266 400 (£13,461/$18,531) a night for a lodge accommodating up to eight people 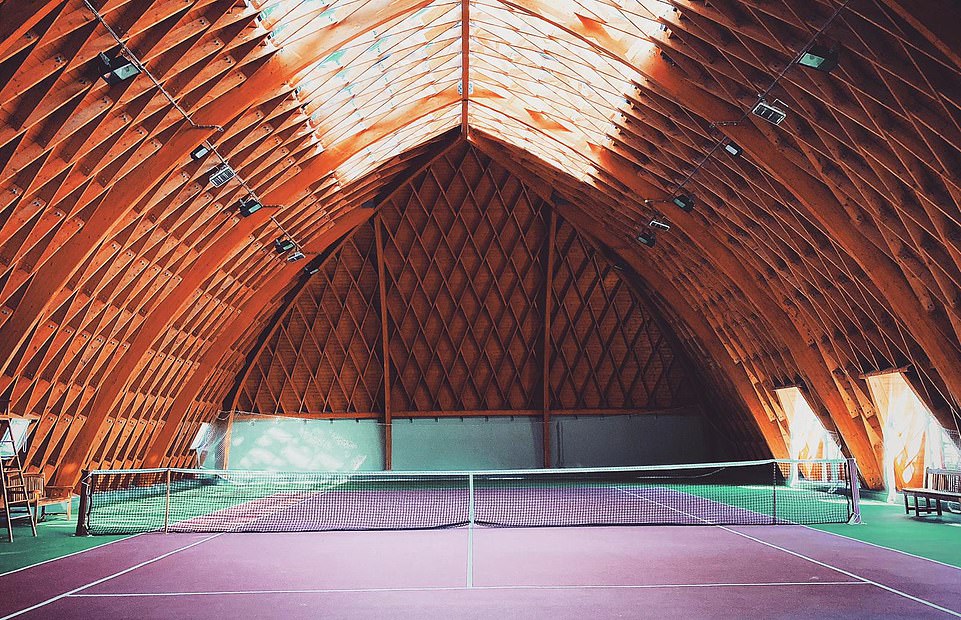 Private club Tennis De La Cavalerie in Paris has a heated court on the seventh floor of an Art Deco building that’s also home to an Aston Martin car dealership and located between the Eiffel Tower and the Trocadero Gardens. The honeycomb ceiling was built with $2milllion and 1,400 pieces of wood after a storm destroyed the original one in 1999 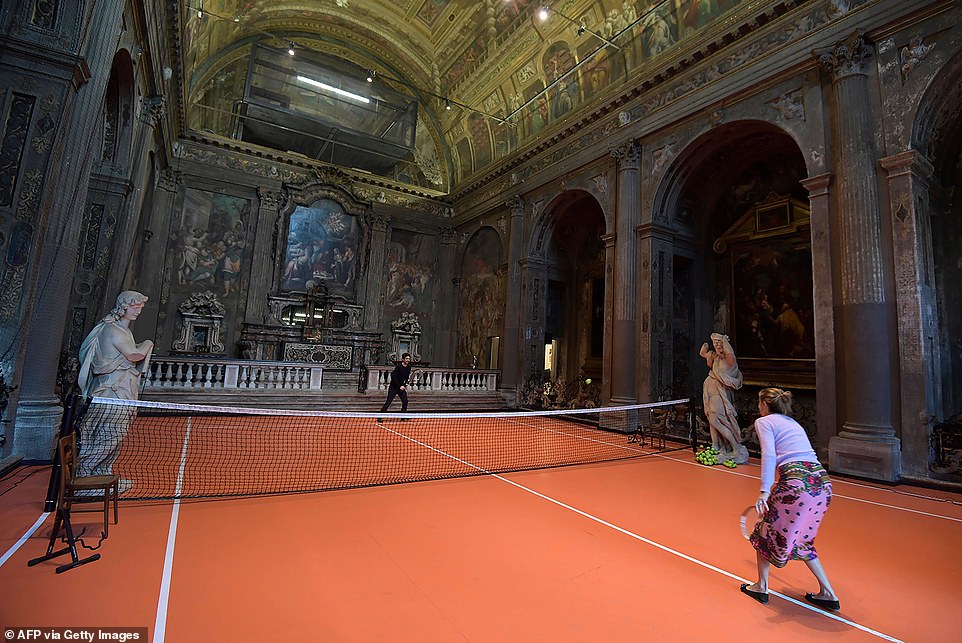 Blessed backhand: In 2016 the deconsecrated Church of Sao Paolo in Milan, which features 16th-century paintings of Paul the Apostle, had a fully functioning tennis court fitted as part of an installation by artist Asad Raza called Untitled (Plot For Dialogue) 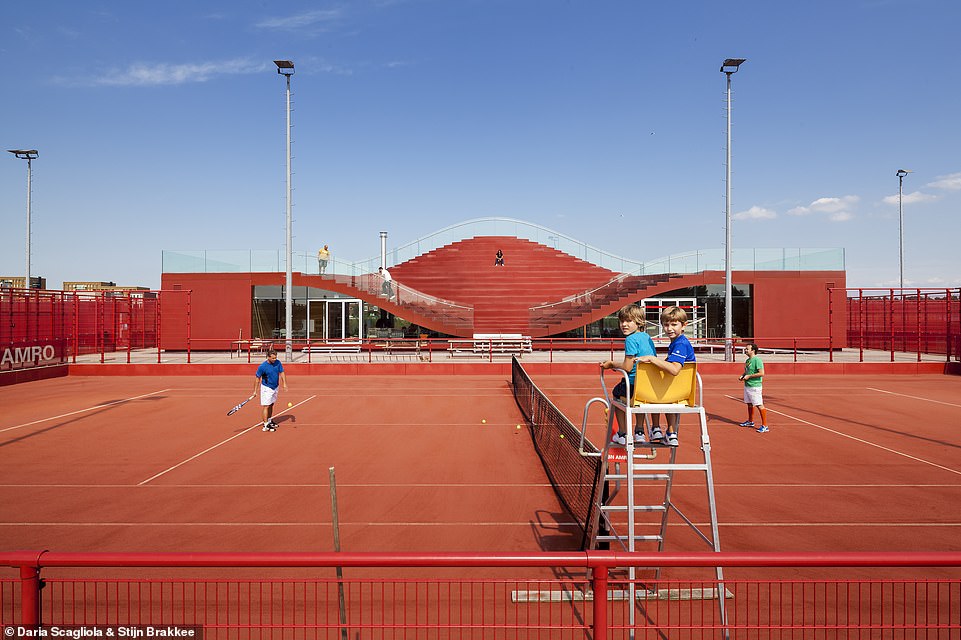 IJburg Tennis Club’s rooftop has been transformed into a red-on-red tennis arena. The club was built in 2008 on one of six manmade islands in east Amsterdam. It is home to ten courts but a unique seating arrangement and bold polymer coat of crimson paint makes this court, dubbed The Couch, a truly ace place for a game. The Couch can seat up to 200 people and overlooks the IJmeer lake. It is the brainchild of architect firm MVRDV. To play on the court is free all 365 days of the year