After a number of setbacks, daunting delays, production problems, and government shutdowns due to the global COVID-19 pandemic, director Christopher McQuarrie wrapped up the shoot for Mission: Impossible 7 after more than a year.

And on Saturday, McQuarrie took to Instagram to mark the milestone with a black-and-white photo of himself and leading man Tom Cruise. 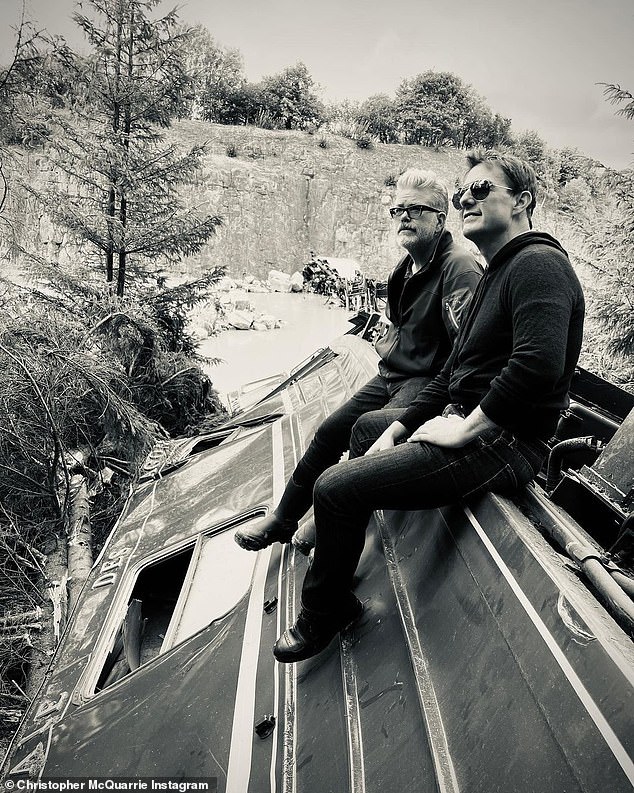 That’s a wrap! Director Christopher McQuarrie announced filming for Mission: Impossible 7 had wrapped with an Instagram post of himself and star Tom Cruise on Saturday, September 11; McQuarrie, 53, and Cruise, 59, are pictured together on top of a crashed train

The triumphant pair could be seen sitting atop a crashed train on the MI7 set.

‘All you need is good people,’ McQuarrie, 53, began in the caption before turning his attention and gratitude to those who made it all possible.

‘To our indomitable, unstoppable, unrelenting cast and crew: Even under the best of circumstances, it should have been impossible,’ he continued.

‘Even having seen it, we can’t believe what you’ve achieved.’

McQuarrie ended the post by sharing, ‘Words can never adequately express our gratitude and admiration – not only to you, but to your loved ones. You are the best in the world.’ 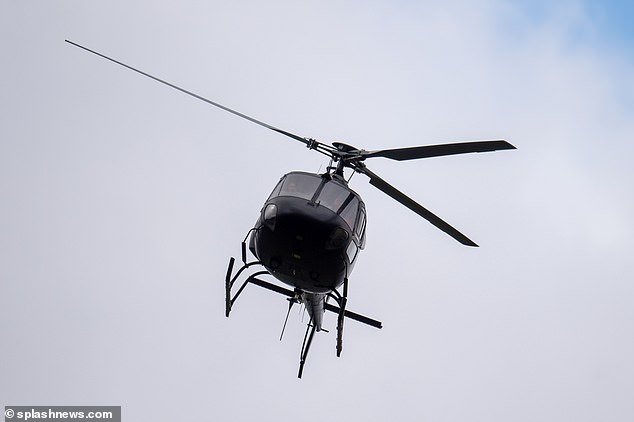 Daredevil Tom: Cruise parachuted in from a helicopter, in the crashed train scene, which resulted in the  carriages hanging off the edge of a cliff 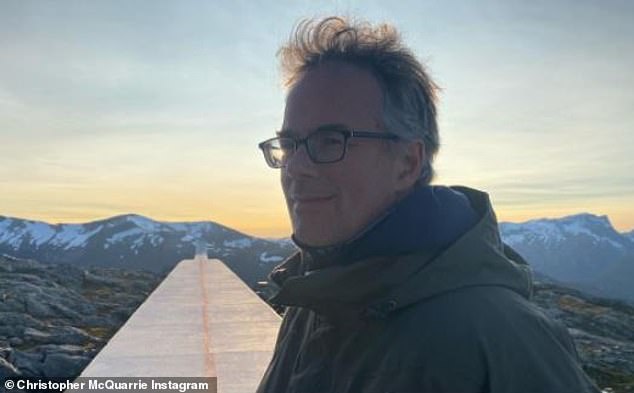 High praise: McQuarrie called the cast and crew ‘indomitable, unstoppable, and unrelenting,’ when he shared the news of the film wrapping: ‘Even under the best of circumstances, it should have been impossible’

In the photo, the two men are staring in the same direction as they sat on the flipped- over train following a daring stunt in Derbyshire, a county in the East Midlands of England.

Cruise, 59, parachuted in from a helicopter, which resulted in the Norwegian train eventually crashing off the edge of a cliff and being suspended upside down above some large trees.

To make the shoot for the movie even more complicated during the pandemic, and subsequent health and safety protocols, production spanned across parts of Italy, Norway, and England. There were several scenes that had be relocated, sometimes to a different town, city or country, due to a host of problems surrounding protocols and restrictions during production. 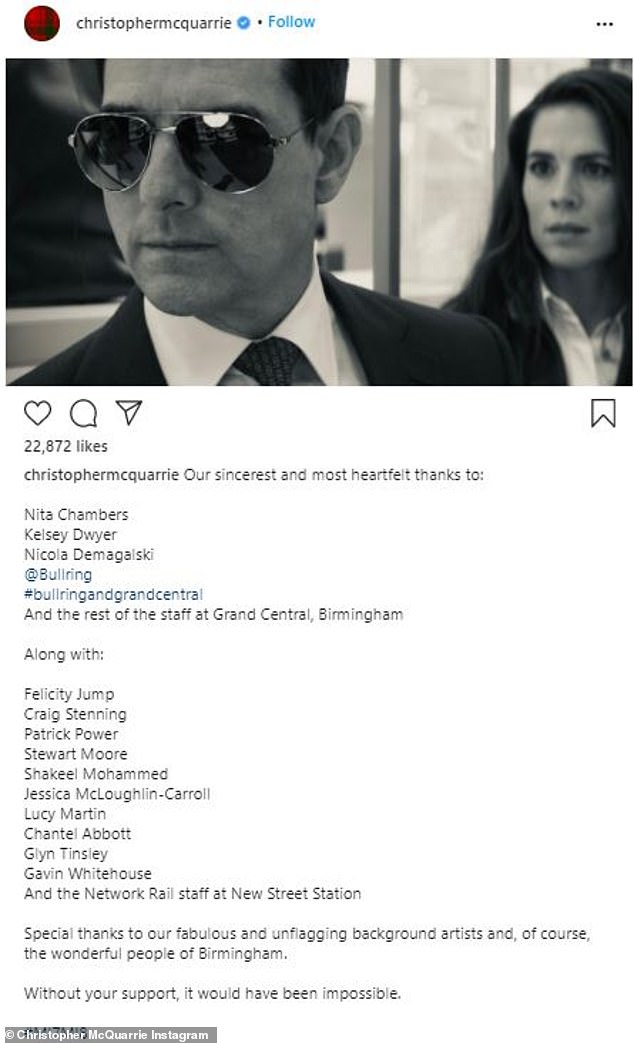 Gratitude and thanks: McQuarrie made a habit of thanking people, sometimes after finishing up a shoot in a specific country; in this post, the director gave thanks to people in Birmingham 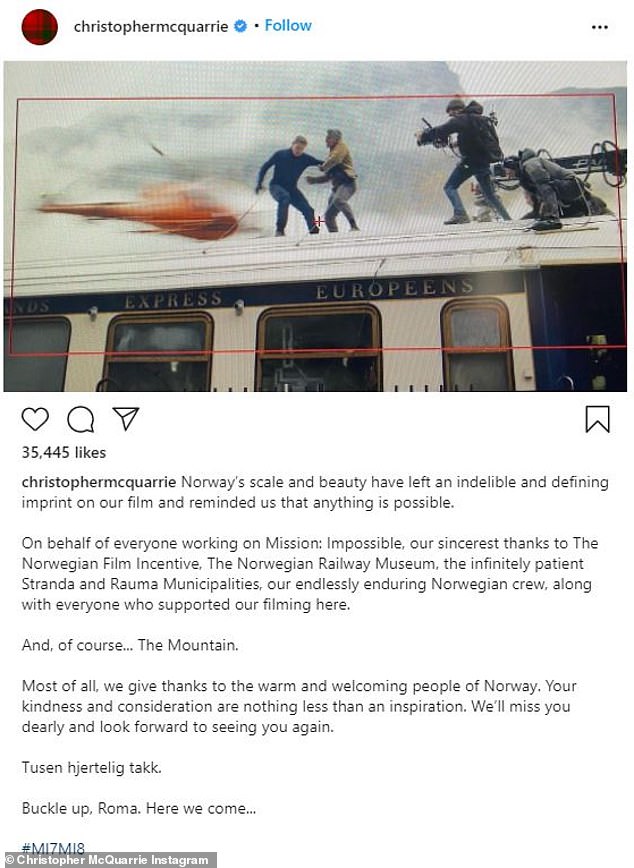 Mission 7 documented: The filmmaker also gave thanks to the people in Norway before heading to Rome, Italy for the news shoot for the film

MI7 is the third film in the franchise directed by McQuarrie, who also was at the helm for the previous two: Rogue Nation (2015) and Fallout (2018).

And in the wake of all the problems and production delays, the plan to go straight into filming an eighth Mission: Impossible movie, with McQuarrie directing, had to be shelved, as previously reported by Deadline.

It is now scheduled to makes its premiere in the United States on September 30, 2022.

After originally being slated for an August 5, 2022 release date, the planned eighth film was pushed back twice, and will now drop on July 7, 2023. 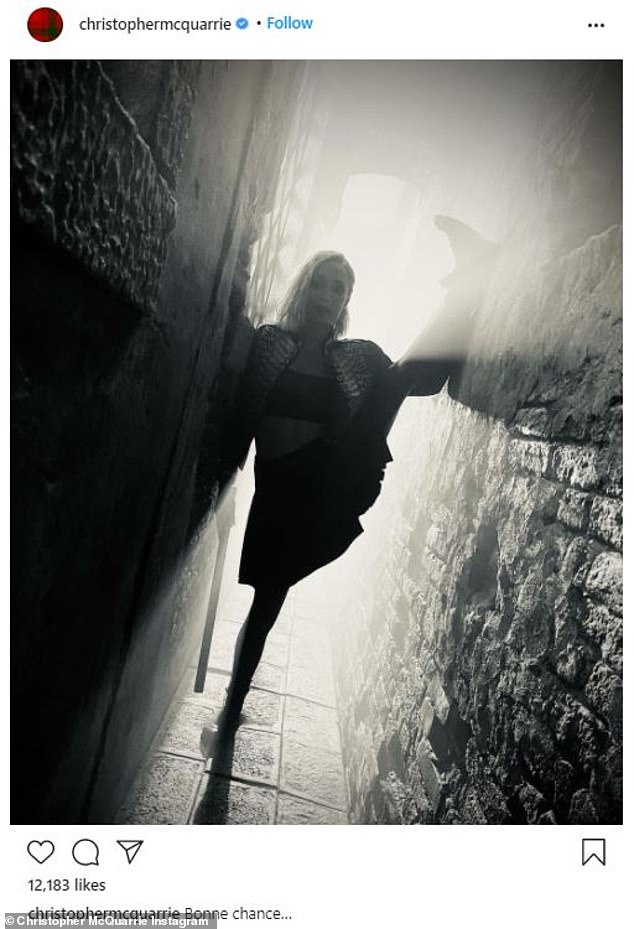