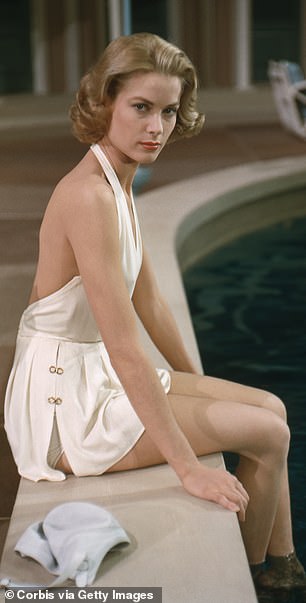 On weekdays, the marble lobby of the imposing Barbizon Hotel in New York, all potted palms, gilt chairs and oriental rugs, was a haven of serenity and business-like calm as its residents passed in and out of the famous entrance on 140 East 63rd Street.

Come the weekend and that same lobby was an infamous Lovers’ Lane, where young men would arrive in force to try their luck with the winsome occupants of the 23-storey building.

Couples might embrace furtively in the shadows or behind potted plants, spied on enviously from above by other residents lining the wooden balcony of the mezzanine.

The coffee shop was a favourite pick-up joint. It was where the young J. D. Salinger, the acclaimed author of The Catcher In The Rye, liked to hang out after he was ditched by his girlfriend Oona O’Neill for Charlie Chaplin.

His standard chat-up line was to pretend he was a Canadian ice-hockey star.

However, the hotel lobby was as far as Salinger and other lovelorn swains could go. Many tried, of course, posing as brothers, fathers, doctors and even priests, but only a handful of men claimed to have made it any further into the women-only residence.

From its opening in 1928 until the early 1980s, the Barbizon Hotel For Women — ‘700 rooms of throbbing virginity’ according to a new book — was a fortress of propriety in a city of sin. Or so it was claimed.

As Time magazine once observed, the stylish Manhattan establishment on the smart Upper East side would house ‘the greatest concentration of beauty east of Hollywood’, a privilege that was entirely down to it being ‘one of the few places in Gomorrah-on-the-Hudson where a girl could take her virtue to bed and rest assured it would still be there next morning’.

One of several large residential hotels established for the growing numbers of young, single women flocking to New York for work in the years after World War I, the Barbizon would come to have a special appeal for aspiring young actresses, singers, models and artists. It had its own studio and rehearsal and concert spaces and was close to Radio City, Carnegie Hall, the Metropolitan Museum of Art, theatres and upmarket shops. 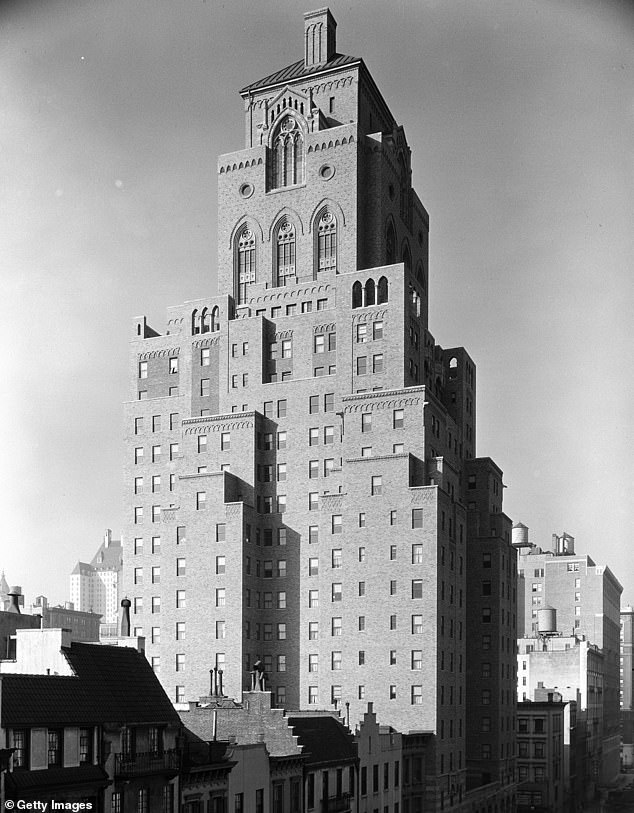 On weekdays, the marble lobby of the imposing Barbizon Hotel in New York, all potted palms, gilt chairs and oriental rugs, was a haven of serenity and business-like calm as its residents passed in and out of the famous entrance on 140 East 63rd Street. Come the weekend and that same lobby was an infamous Lovers’ Lane, where young men would arrive in force to try their luck with the winsome occupants of the 23-storey building

Grace Kelly — one of scores of famous Barbizon alumnae that included the writers Sylvia Plath and Joan Didion, actresses Joan Crawford, Candice Bergen, Ali McGraw, Jaclyn Smith and the future Nancy Reagan — felt so comfortable at the Barbizon that she was happy to dance topless along the corridors when the mood took her.

Indeed, well-to-do parents like Kelly’s would not permit their starry-eyed daughters, who were determined on careers rather than immediate marriage and children, to live anywhere other than ‘The Barb’, and its monastically spartan rooms.

Yet some would never stop worrying about the ‘wolves’ who stalked NYC. Judy Garland, for example, would phone the Barbizon every three hours from California, insisting that if her daughter Liza Minnelli wasn’t in her room that staff had to go and find her.

But just how safe were these generations of bright and beautiful young things in an establishment that earned such lascivious notoriety that it was dubbed ‘the Doll House,’ asks Paulina Bren in The Barbizon — The Hotel That Set Women Free, which chronicles the hotel’s colourful history?

Certainly, the accommodation did not encourage trysts. The standard $8-a-week rooms, decorated with flowery bedspreads and matching curtains and boasting a radio, were tiny and the single beds narrow and hard. In fact, there was so little space an occupant could open and close the door while lying in bed.

Hotel staff were protective and sharp-eyed, and in the evenings lifts were staffed only by female attendants as a further safeguard.

The Barbizon had other merits, however, not least the ‘sorority’ feeling of mutual support in a society that wasn’t always accepting of young women trying to forge a career.

Ali MacGraw, the star of Love Story who stayed there in 1958, recalled the feeling that she was ‘going somewhere’ just by being at the Barbizon. It was, says Bren, ‘a place of glamour, desire and young female ambition’. 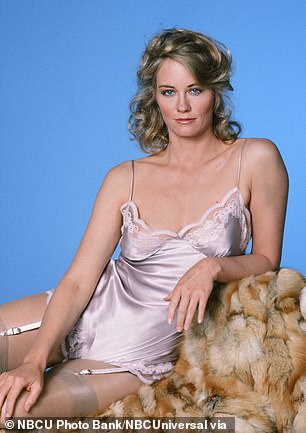 ‘Even actress Cybill Shepherd (pictured), rather good at ‘sneaking em in, sneaking ’em out’, refused to give it a try at the Barbizon because it was an institution not to be messed with,’ writes Bren

There was an indoor swimming pool, gym, squash courts, lecture room and library, and the hotel offered an endless programme of cultural activities and opportunities for self-improvement. Afternoon tea was free for residents and music would be provided by a woman who played the organ — dressed in pearls and a pill box hat.

In some ways, it was more finishing school than hotel, and a place that smart secretarial schools and modelling agencies chose to house their girls.

Along with an ability to pay, guests had to be presentable and preferably attractive, and provide references as to their good character. They would be graded A, B or C depending on their age.

Parents could have staff impose a curfew while late nights for guests were discouraged by hourly bed checks from 10pm. The management also enforced a strict dress code — guests who tried to go out wearing trousers were told to change into something more respectable.

Of course no men were permitted in rooms — not even close male relatives — and alcohol was completely forbidden.

The 1950s were the hotel’s glittering heyday when virtually everyone there was either an actress or model. As the Barbizon’s glamour quotient rose, so did male interest. A favourite ploy by young suitors was to pretend to be a doctor going to see a patient.

‘No doubt, he’ll be 20-years-old and will take care that I see part of a stethoscope sticking out of his pocket. It’s the oldest gag in the Barbizon,’ said Mae Sibley, the hotel’s formidable assistant manager.

The male attention wasn’t always amusing — some women claimed they were sexually assaulted right outside the hotel.

Grace Kelly lived there for three years in the Fifties while studying at a New York drama school.

The future star, who was so short-sighted that she relied on horn-rimmed glasses, favoured tweed suits and cardigans, and spent much of her time in her room with a tape recorder working to change her high-pitched voice into the ‘oddly transatlantic British-like accent mandatory for all actors of the time’.

Kelly was described by Alfred Hitchcock as the most promiscuous woman he’d ever met and Bren agrees that ‘rumours of her sexual appetite and promiscuity abounded’.

At The Barb, the actress ‘forever identified with sweetness and chastity’ was renowned for ‘dancing to Hawaiian music down the hallways, and given to shocking her fellow residents by performing topless’.

Many Barbizon guests were with the famous Ford Models agency which, like its rival Powers agency, used the hotel as a dormitory.

Even back then, some of the girls were bulimic and long queues would form outside the shared bathrooms, but that wasn’t the main concern.

‘Where else could you put girls who were only girls?,’ the agency’s founder, Eileen Ford once said. ‘[The Barbizon] was safe, it was a good location and they couldn’t get out.’

Bren writes that there were pluses. The models could expect to eat and drink for free at New York’s fashionable Stork Club in return for fraternising with ‘the rich and famous who were always ready to dine with a pretty face or two, or three’.

Another popular destination for the Barbizon Barbies was a nearby Irish bar run by Malachy McCourt, brother of Frank McCourt who wrote the best-selling Angela’s Ashes.

In what appears to have been the first recorded example of a man managing to breach Barbizon security, Malachy McCourt once escorted a guest back to the hotel and, while she distracted the front desk, ran up the stairs to her room ‘faster than a fiddler’s elbow’. He ‘did not find the hard single bed exactly conducive to lovemaking but he made do,’ says Bren.

McCourt crept out a few hours later aware that the ‘eagle-eyed woman in the front desk’ wouldn’t know which cramped bed he’d been in when there were, as he put it, ‘700 rooms of throbbing virginity’ to choose from.

A few others claim they did and Bren suggests they might have done so by masquerading as one John MacGuigan, a good-looking gynaecologist who was called to the Barbizon so often that staff simply waved him through.

That said, few dared try to smuggle men in. ‘Even actress Cybill Shepherd, rather good at ‘sneaking em in, sneaking ’em out’, refused to give it a try at the Barbizon because it was an institution not to be messed with,’ writes Bren.

Sylvia Plath, whose most famous novel, The Bell Jar, was based on her time at the Barbizon, had arrived in New York in the summer of 1953 aged 20, desperately hoping to meet an ‘eligible man’.

She was one of 25 college students housed there each summer after being chosen to work as interns at Mademoiselle, a glossy fashion magazine famous for its literary output.

Plath decided that the Barbizon was about the worst place to find a man and left feeling a little ‘deflated’, says Bren. On her last night there, the feminist icon went up on to the roof and emptied the entire contents of her wardrobe on to the street below.

She wasn’t the only young woman who found the Barbizon didn’t live up to its considerable hype. Some never achieved the dreams that had brought them to New York but stayed on at the hotel, sometimes for decades, in their lonely little rooms.

For others, the harsh reality of living in the city or failures in their careers or love life were too much to bear: there were estimated to have been dozens of suicides, some women hanging themselves from curtain rails, others jumping out of their window.

‘The pressure to be a certain way, to look a certain way, to marry by a certain age, was intense,’ concludes Bren. Ironically, it was the women’s movement of the Sixties and Seventies that sounded the death knell for the Barbizon.

While future Charlie’s Angels star Jaclyn Smith was a small-town girl who didn’t mind the rules and felt her two years at the Barbizon in the Sixties taught her an invaluable ’emotional independence’, others felt it had become painfully outdated, reminding them of ‘Miss Havisham’s mansion’ in Great Expectations.

Successive revamps from 1981 — including allowing male residents — failed to save the hotel and it was converted into luxury condominiums in 2005 and renamed Barbizon 63.

Two of them were bought by the British comic Ricky Gervais. He has yet to report the sight of Grace Kelly’s semi-naked ghost sashaying down the corridor.

The Barbizon by Paulina Bren is published by Two Roads, £20.