The heads of Facebook, Google and Twitter will testify at House hearing on disinformation – as Mark Zuckerberg says he’s open to Congress changing Section 230

This time they’ll be talking about disinformation spreading online in front of two House subcommittees of the Energy and Commerce Committee.

In pre-released testimony, Zuckerberg expressed that he was open to Congress changing Section 230 of the Communications Decency Act, suggesting ‘thoughtful reform’ lawmakers could make. 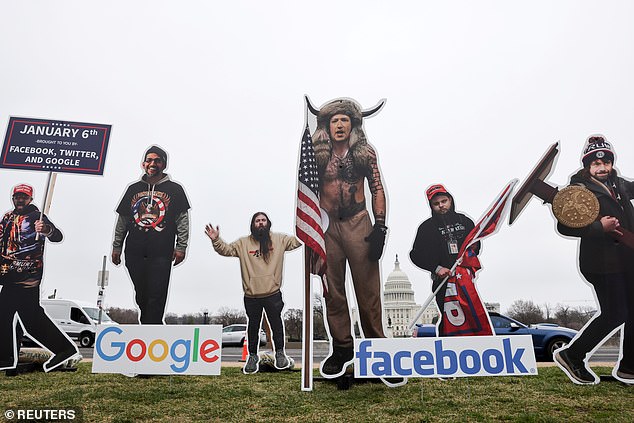 An installation outside the Capitol Building shows the tech CEOs who are testifying Thursday (from left) Alphabet’s Sundar Pichai, Facebook’s Mark Zuckerberg and Twitter’s Jack Dorsey dressed as the January 6 insurrectionists

WHAT IS SECTION 230 OF THE COMMUNICATIONS DECENCY ACT

Under the U.S. law, internet companies are generally exempt from liability for the material users post on their networks.

Section 230 of the 1996 Communications Decency Act – itself part of a broader telecom law – provides a legal ‘safe harbor’ for internet companies.

THE TEXT: ‘No provider or user of an interactive computer service shall be treated as the publisher or speaker of any information provided by another information content provider’

WHAT IT MEANS: Social media platforms are not held legally liable for what their users post, and instead are considered an outlet where people can post whatever they want – within the guidelines of their terms of service

The law, in its current form, allows internet companies to be exempt from liability for content users post.

‘Instead of being granted immunity, platforms should be required to demonstrate that they have systems in place for identifying unlawful content and removing it,’ Zuckerberg’s written testimony said.

‘Platforms should not be held liable if a particular piece of content evades its detection – that would be impractical for platforms with billions of posts per day – but they should be required to have adequate systems in place to address unlawful content,’ the Facebook co-founder added.

He suggested to lawmakers that websites put systems in place that are ‘proportionate to platform size and set by a third-party.’

‘That body should work to ensure that the practices are fair and clear for companies to understand and implement, and that best practices don’t include unrelated issues like encryption or privacy changes that deserve a full debate in their own right,’ Zuckerberg also wrote.

Other parts of his testimony outlined what Facebook was doing to combat disinformation being spread on the social media platform, especially conspiracy theories like QAnon and anti-vaxxer sentiment that could prevent people from being vaccinated against COVID-19.

Both President Joe Biden and former President Donald Trump have expressed that they want Section 230 gone.

In January 2020, Biden said ‘Section 230 should be revoked, immediately’ for Facebook and other platforms. ‘It should be revoked because it is not merely an internet company. It is propagating falsehoods they know to be false,’ Biden said of Facebook, in an interview with The New York Times.

Trump also shared these views, going so far as to veto a giant defense bill at the end of 2020 to press Congress to make changes to the law.

Trump also objected to the defense bill because it contained a provision that gave the go-ahead to the DOD to start renaming bases named after Confederate figures, like Fort Lee.

In reality, Section 230 allowed social media to keep Trump’s postings up and not get sued.

Dorsey, whose pre-released testimony broadly outlined steps Twitter is taking to combat misinformation, will likely get asked about the company’s controversial decision to ban Trump from the platform in the aftermath of the January 6 insurrection.