Hope Bennett and her sister Iris Bennett both killed people during the season two premiere of The Walking Dead: World Beyond on Sunday on AMC.

The episode also made it clear exactly how the Civic Republic Military (CRM) destroyed the Campus Colony. A flashback to six weeks earlier revealed that soldiers laid explosives to blow holes in the protective walls of the perimeter that allowed a column of zombies to enter.

The grim turn of events in the post-apocalyptic world became clear in the episode titled Konsekans, which started showing soldiers laying charges outside the perimeter of Omaha, Nebraska, as an army of zombies approached. 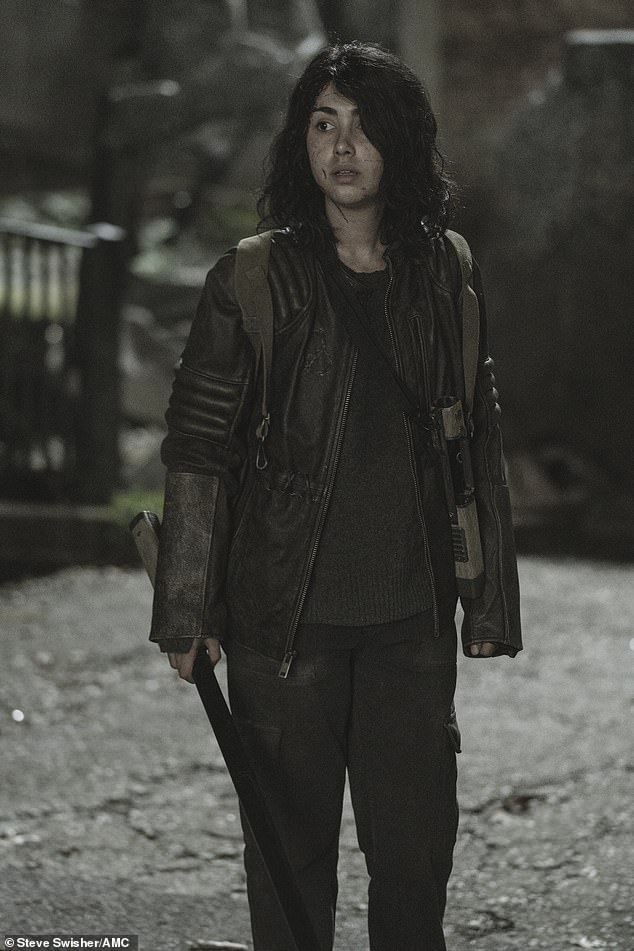 Season premiere: Hope Bennett was separated from her sister on the season two premiere of The Walking Dead: World Beyond on AMC

Elizabeth Kublek (Julia Ormond), Civic Republic Military leader, was watching the operation from afar. She spoke to a CRM soldier about the communications break that occurred. The explosion occurred one day after Monument  Day.

Then the soldier asked Elizabeth about her decision not to inform staff Sergeant Jennifer Mallick, also known as ‘Huck’, (Annet Mahendru), her daughter, about the planned explosions. She told him that she hoped Huck had reached a safe distance. They watched as the explosives detonated.

The episode then shifted to the present day where Iris (Aliyah Royale), Hope’s sister, was battling with a zombie. The zombie scratched her but then it turned out it was only a dream. She woke up in her room and started going over her notes. 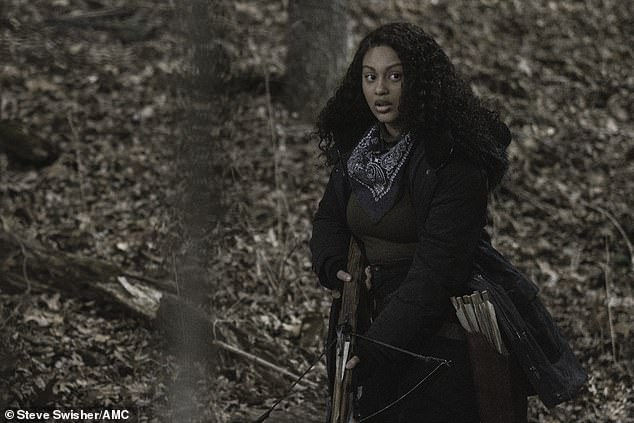 Felix Carlucci (Nico Tortorella) walked in and told her not to worry about her sister, that he was sure she was okay. She told him it was her birthday today. He told her that he was sure her father was doing something for her and to try to get some sleep.

Hope (Alexa Mansour) and Huck it turned out were in a helicopter with Elizabeth being flown into a CRM research facility. Hope wanted to know where she was when they landed. A zombie approached them and Elizabeth killed one and told her to think of it as a lesson or field trip. Hope said she told her she was being taken to see her father. 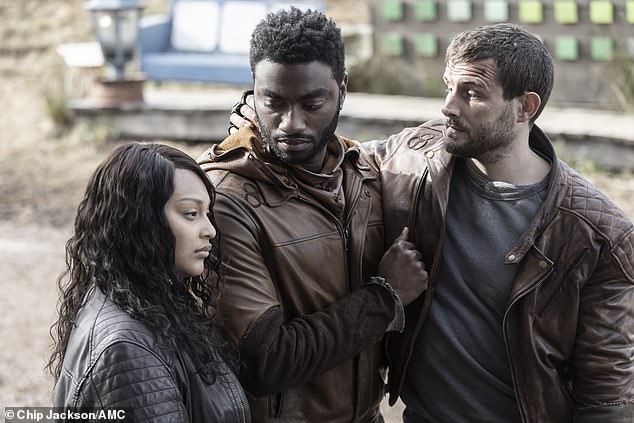 Sticking together: Felix and Will stayed with Iris after learning more about the CRM

Elizabeth told Hope she needed to think more positively about the future but that it will take everyone coming together to make that happen. Elizabeth told her that bringing her in was a risk unless she knew that she was fully committed to being an asset for the future. Hope told she was and that she was ready.

Elizabeth handed her a walkie talkie and told her to think about what she really wanted and to let her know by dawn. Hope couldn’t believe she was letting her go.

‘It’s okay to hate us, Hope. We carry that burden so others don’t have to. So there can still be good in the world,’ Elizabeth told her. 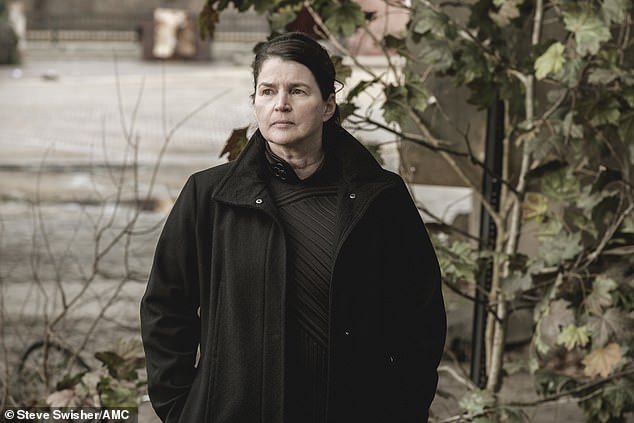 Tough calls: Elizabeth as leader had to make some tough calls so there could still be some good in the world

Meanwhile, Will (Jelani Alladin), Iris and Felix met up in the rain. Will told them the CRM controls all communication. He said he waited on a communication from Omaha that never came. He said he asked to go on a scouting mission that he soon realized was a set up. He said he was able to escape into the woods.

He said he saw helicopters dropping off shipping containers with equipment covered in blood and that he heard that they called it a salvation mission. Felix couldn’t believe he was telling him that Omaha was gone. Iris wanted to know why they lied and Will told them he didn’t know. He only knew that they wanted him dead.

They traveled with a group to a place called the Perimeter, an abandoned farm town that was turned into an artist colony back in the day. They met with Indira (Anna Khaja) , leader of the  Perimter who said she would take care of them but asked them to surrender their weapons. She said her council would want to ask her some questions and wanted to know from them what they live for in the post-apocalyptic world. 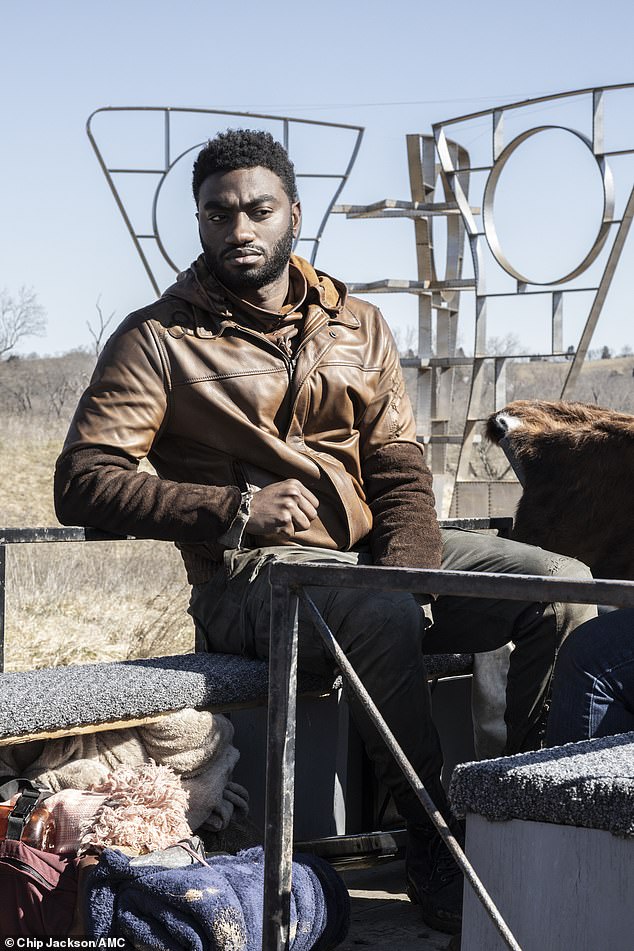 New community: Will took them to a place called the Perimeter, an abandoned farm town that was turned into an artist colony back in the day 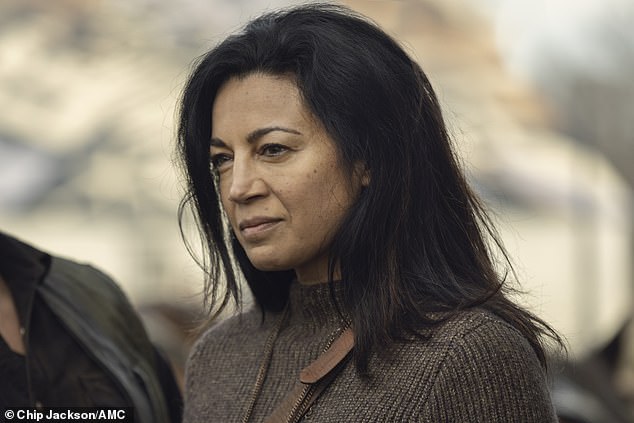 Perimeter leader: They met with Indira (Anna Khaja) , leader of the Perimter who said she would take care of them but asked them to surrender their weapons

Felix looked at Will and told him he lived for ‘these two.’ Iris told her she lived for Hope. Will told them later that the group had an arrangement with the CRM that they wouldn’t bother each other. He said they were risking everything harboring them. Will told them they couldn’t just storm the CRM to get Hope and Leo, but that they needed to be strategic.

Hope was busy trying to make it out of the city alone. A zombie attacked her and she fell down the stairs. She hit her head and started having visions. Hope was followed by a hooded figure.

Huck spoke to Elizabeth about why they let Hope go. Huck said she took Hope on because she was angry and lost and ‘I could relate.’ Elizabeth told her she could go after Hope. Elizabeth wanted to know from her how much the others knew about CRM. 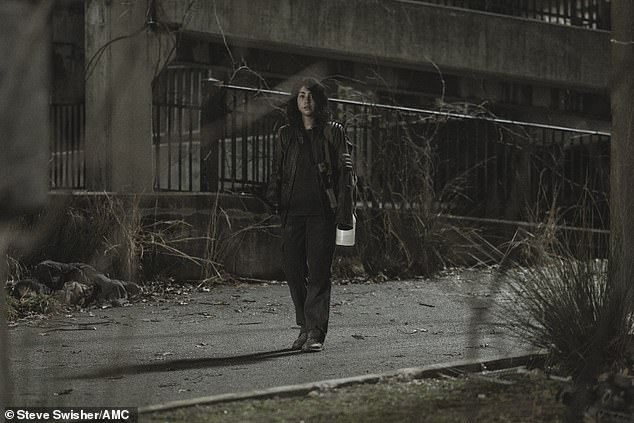 All alone: Hope was busy trying to make it out of the city alone

The hooded person jumped out behind a curtain and attacked Hope. The person turned out to be Candice Froder (Hannah Alline) , a lost girl who’s posters Hope had seen on her walk through the city. Hope pushed her against a horde of zombies who ate her.

Alone, and surrounded by zombies, Hope reached out and used her walkie-talkie to call Elizabeth, who sent soldiers to retrieve her. Huck said to Elizabeth that she wanted to see if she would go after her and Elizabeth said ‘I was really glad I was wrong.’

Huck went to see Hope who was being kept in a cage. Huck told her if she ever wanted to see Iris and Felix again that they needed to get on the same page. Huck said she was protecting them and that she sent them to a settlement. Hope asked her why she did that . 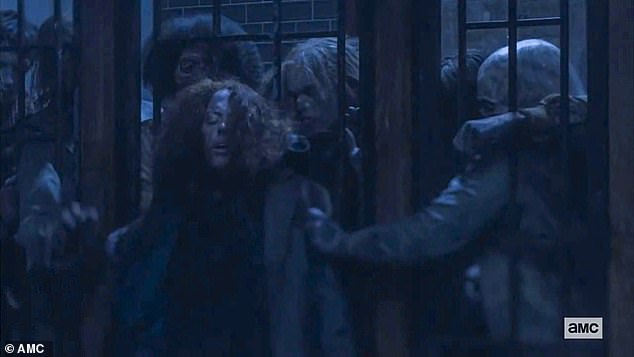 Poster girl: Poster girl Candice Froder was pushed by Hope against a horde of zombies who ate her 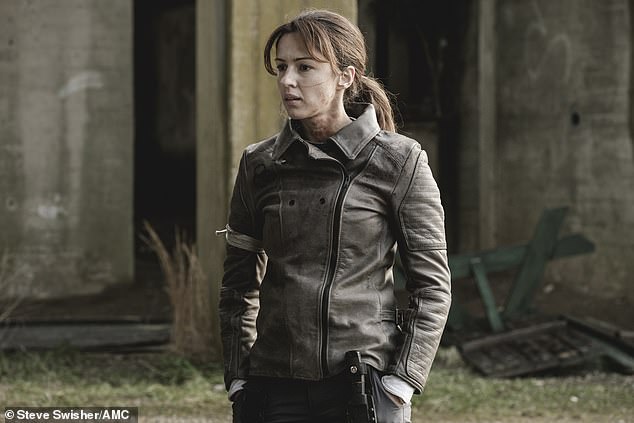 Checking in: Huck went to see Hope who was being kept in a cage

‘CRM finds out that you decoded their intel,’ said Huck. ‘That you all knew that I had orders to take out Iris and Felix …and that I let them live knowing that? I don’t know what will happen, but I know we have killed people for less.’

Hope believed that she was just trying to cover up her mistake. Huck told her if she said anything to Elizabeth that she would be putting a target on her father’s and her friend’s back. Hope told her she wasn’t going to work with them in the future. Huck walked off and wished her Happy Birthday.

Hope was then taken to see her father Dr. Leo Bennet ( Joe Holt). When she saw him, she hugged him and cried. 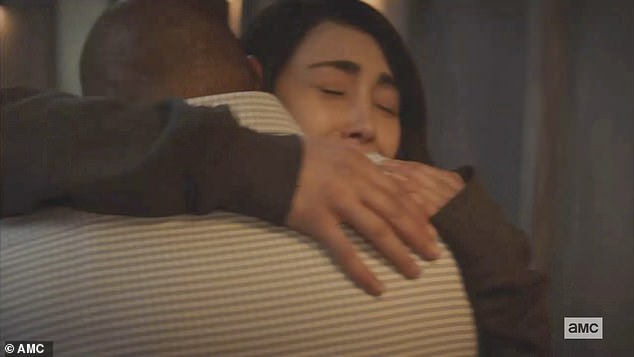 Big hug: Hope was then taken to see her father Dr. Leo Bennet ( Joe Holt) and they hugged

The show shifted back to Iris and Felix. He told her it was great that the council was letting them stay there, but that they would only sit tight for so long. Iris grabbed her bow and arrow to go outside and inspect the grounds.

She saw a CRM trooper who pointed his weapon at her. She attacked and killed him.

‘It wasn’t empties, it was you,’ she said in reference to the Campus Colony as he was dying.

‘That’s what you get,’ she said stabbing him to death.

The Walking Dead: World Beyond will return next Sunday on AMC. 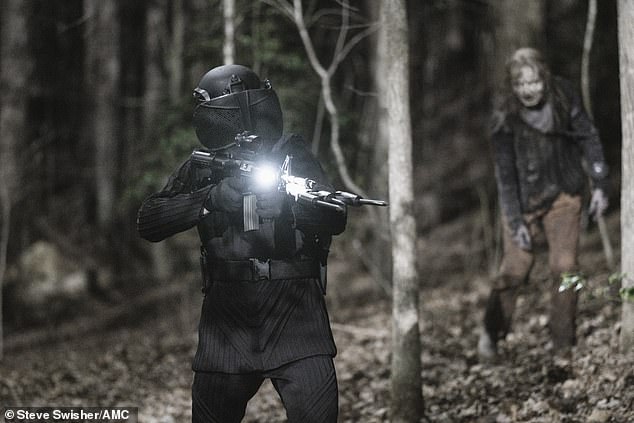 Under attack: Iris saw a CRM trooper who pointed his weapon at her 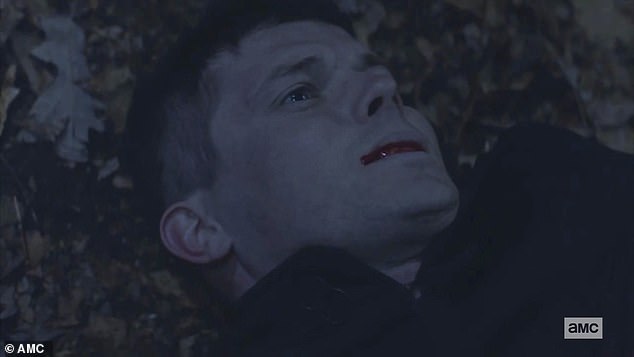 Mask off: She took the mask off the soldier as he was dying 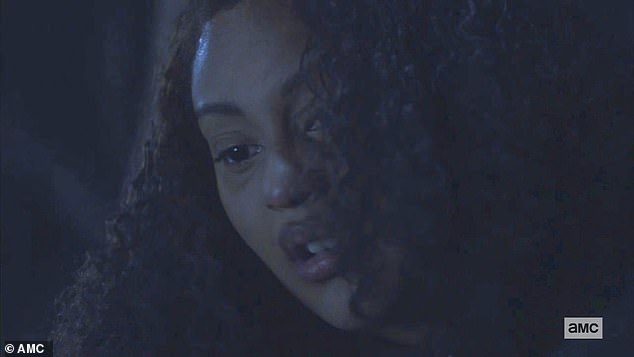 Sudden realization: ‘It wasn’t empties, it was you,’ Iris said in reference to the Campus Colony as the soldier was dying