Everyone aged over 50 in Britain will be offered a third COVID-19 vaccination jab in the autumn in an attempt to eradicate the threat from the infection entirely by Christmas.

Trials of two options are under way, supervised by Chris Whitty, the chief medical officer for England. The first involves vaccines specifically modified to tackle new variants, while the second is for a third shot of one of the three versions already in use – Pfizer-BioNTech , Oxford-AstraZeneca or Moderna, The Times reported.

Early findings from trials have raised hopes in the Government that the two approaches can nullify the threat from existing and new variants, it is understood.

It is also believed that only higher risk Britons such as those over 50 and those with underlying health conditions will need a third jab. One possible way of administering the jab would be alongside the annual flu jab, with separate injections given in each arm.

A senior government minister said: ‘We will have a lot to say about the booster programme soon. It’s looking really positive so far.

‘We think that the level of protection in the population to any variant will be so high that by Christmas, Covid-19 should have just faded away into the background like any other illness in circulation. So much so that we don’t think there will be any need to give a booster shot to younger people because transmission will have got so low.’

A total of more than 34.6 million people in Britain have been given a first dose of COVID-19 vaccine, government statistics showed on Tuesday.

Britain, which has a population of 67 million, has deals for over 510 million doses of eight different COVID-19 vaccines, some of which remain under development.

A member of the medical team administers a COVID-19 vaccination shot at the NHS vaccination centre in Robertson House on January 14, 2021 in Stevenage, England 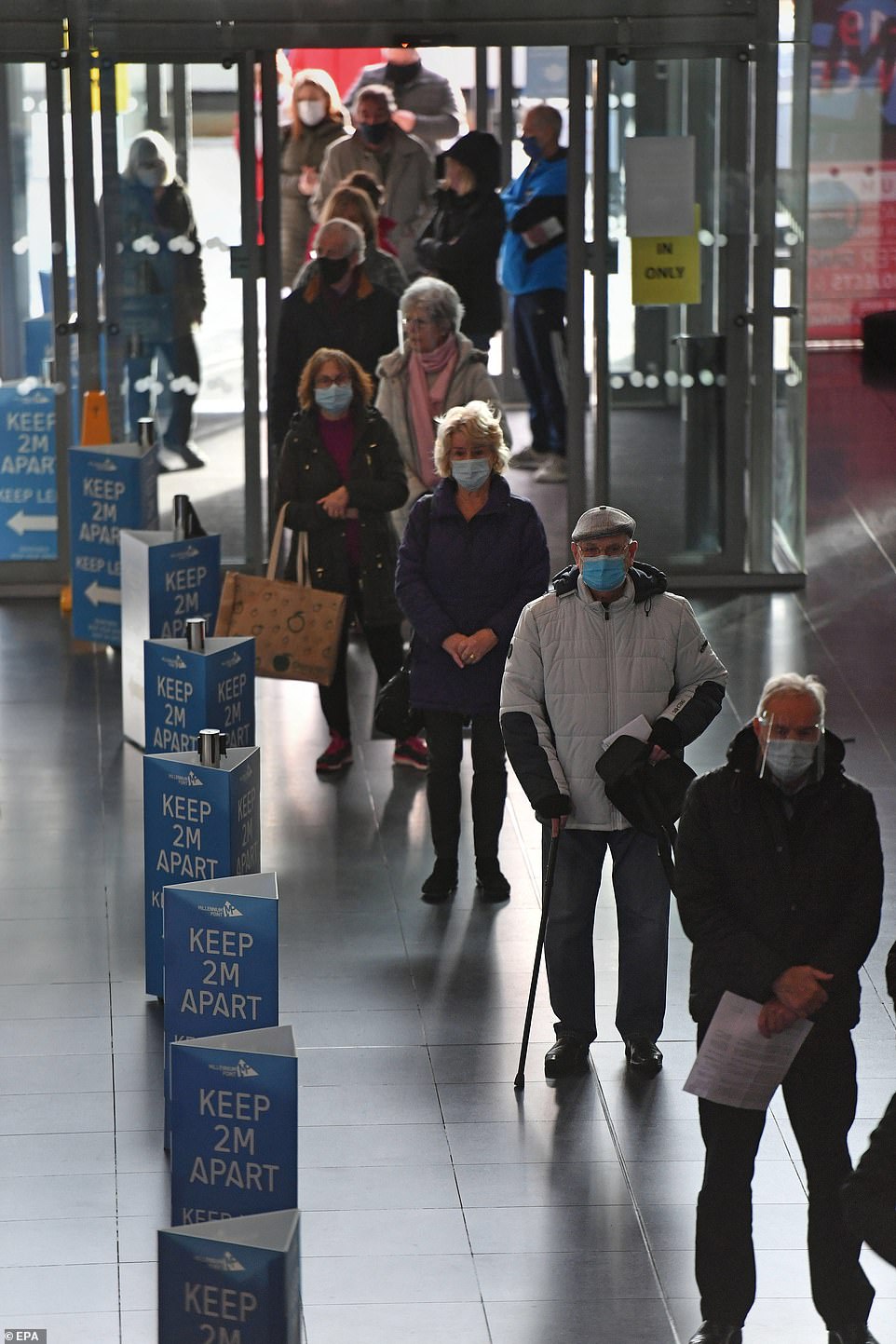 People queuing to receive an injection of a Covid-19 vaccine at the NHS vaccine centre that has been set up at the Millennium Point centre in Birmingham, Britain 11 January 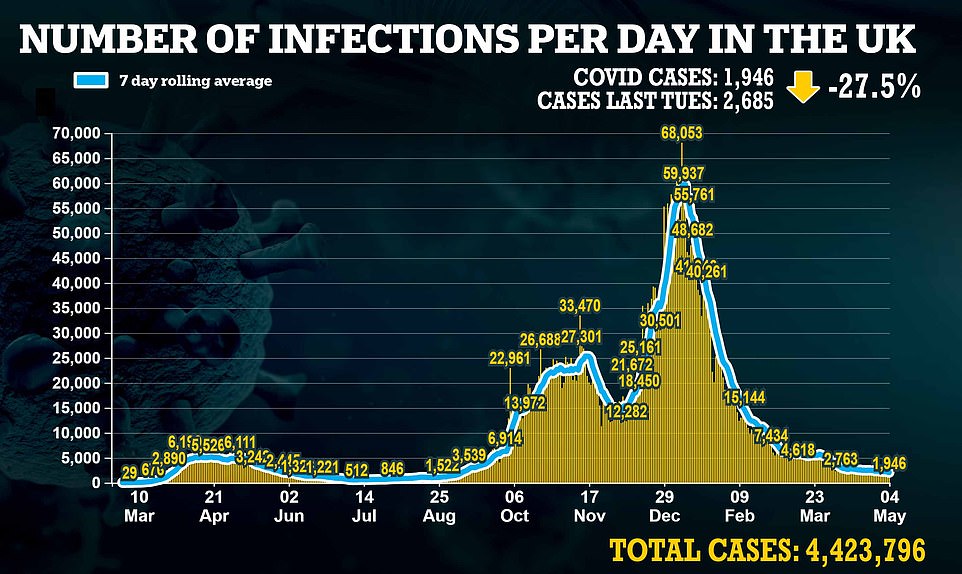 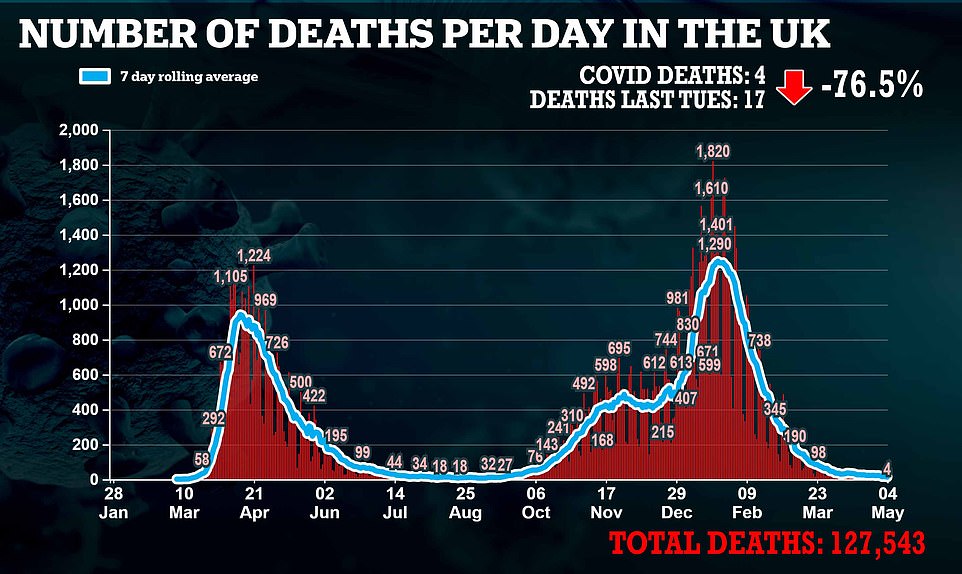 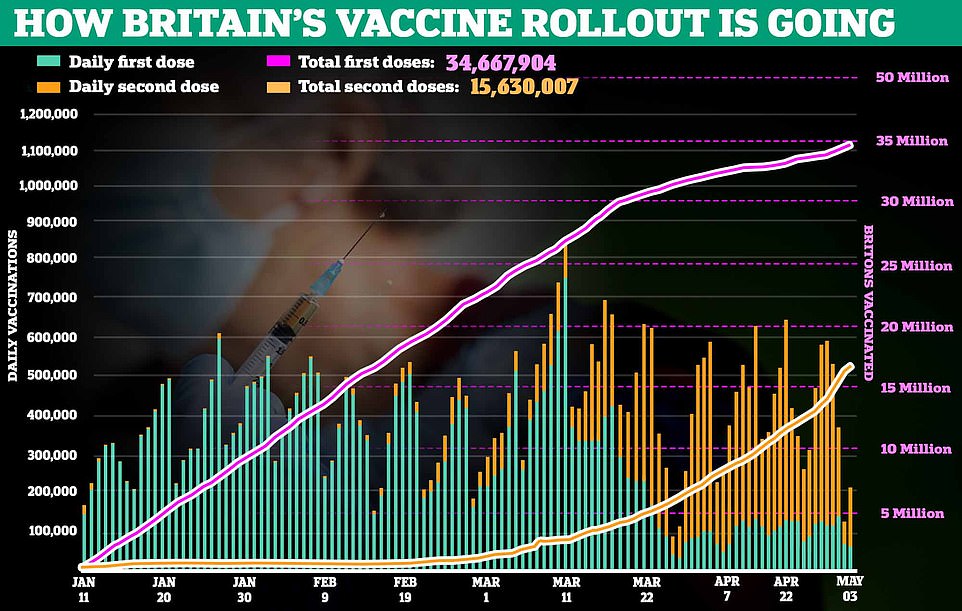 The UK will buy 60 million more doses of Pfizer/BioNTech’s vaccine, health minister Matt Hancock said last week, in a deal that more than doubles the country’s supply of the shot ahead of a booster programme later this year.

Britain has now ordered a total of 100 million doses of the Pfizer vaccine, one of three COVID-19 shots being rolled out in the country.

The news comes after Britain dropped demands for India to release five million doses of the Oxford/AstraZeneca vaccine destined for the UK.

£29m to help fight against variants

Vaccines that protect against new virus variants will be developed much more quickly thanks to a major new research hub, Matt Hancock has pledged.

The Health Secretary is investing £29.3million into a series of new laboratories at the Porton Down research centre in Wiltshire.

Government officials are concerned a third virus wave could be triggered by the emergence of a new variant that cannot be protected by vaccines in use now.

While scientists are confident existing vaccines provide some protection against the Kent and South African variants, little is known about their effectiveness against others, including the Brazilian and Indian variants.

The money will quadruple the number of tests carried out each week at the site of potential new vaccines – from 700 to 3,000.

It currently takes several months from a variant being identified to a jab being developed that protects against it and is safe.

But officials hope this wait will be slashed to several weeks. The first jabs capable of protecting against the South African variant and potentially others are likely to be ready in September or October.

Mr Hancock said: ‘The UK has proven itself to be a world-class force in the production of Covid-19 vaccines, with the Oxford/AstraZeneca, Novavax and Valneva vaccines all researched, developed or manufactured on British soil.

‘This multi-million pound funding for a state-of-the-art vaccine testing facility at Porton Down will enable us to further future-proof the country from the threat of new variants.’

He insisted: ‘We are committed to supporting the UK’s flourishing life sciences industry.’

Dr Jenny Harries, chief executive of the UK Health Security Agency, said: ‘While we expect the existing vaccines to offer protection against new variants – particularly preventing serious illness and death – it is important that we continue to monitor the picture as it develops.’

Whitehall sources said efforts to lift the export ban imposed in March by the Indian government had been ‘put on the backburner’.

It comes amid concern about the dire state of the pandemic in the country, where Covid cases have soared past 20million.

Boris Johnson held wide-ranging talks via video link with his Indian counterpart Narendra Modi as part of plans to deliver a ‘quantum leap’ in relations between the two countries in the next decade.

In a statement released afterwards, Mr Johnson highlighted Britain’s assistance with the crisis in India, which includes the provision of oxygen equipment and ventilators.

He said: ‘In the last week the British people have stepped up in their thousands to support our Indian friends during this terrible time in a demonstration of the deep connection between the UK and India. This connection will only grow over the next decade as we do more together to tackle the world’s biggest problems and make life better for our people.’

In March, the Prime Minister despatched his senior aide Lord Lister to try to secure the release of five million doses of the Oxford/AstraZeneca vaccine produced by the Serum Institute of India.

At the time, the institute – the world’s largest vaccine producer – indicated that the export had been blocked by the Indian government.

The decision dashed hopes that the UK Government could fast-track the vaccination of all adults here ahead of the July target.

The issue was not directly raised during talks between the two leaders, although there was discussion of the need to ‘firm up international supply chains to ensure critical medicines, vaccines and other medical products reach those who need them most’.

But a Whitehall source said the UK’s request for the release of the doses had been shelved in the face of a crisis that has seen Indian hospitals overwhelmed in recent weeks.

‘I think it’s fair to say it has been put on the backburner,’ the source said. ‘It is not an immediate prospect.’ While the UK has given at least one vaccine dose to more than half the population, the equivalent figure in India is less than 10 per cent.

The talks followed the cancellation of the PM’s planned visit to India last month, which was ditched at the last minute because of the crisis. Mr Johnson sees India as a key post-Brexit ally, both economically and strategically.

The two leaders agreed a ‘2030 roadmap’ covering co-operation across health, climate change, education, science and technology, and defence. It also included a commitment to an ‘enhanced trade partnership’ paving the way for a full free trade agreement aimed at doubling bilateral trade over the next decade. 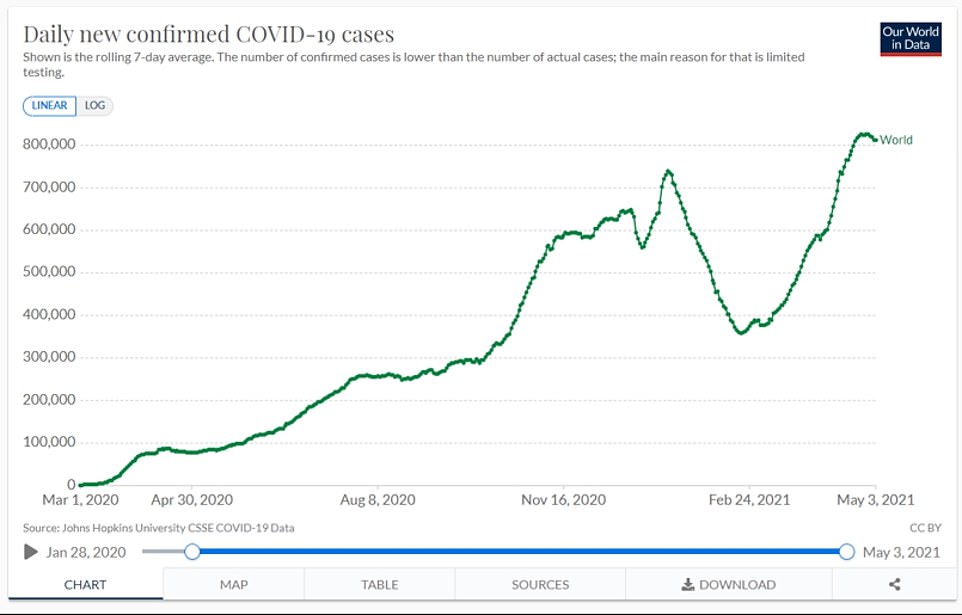 There were 6million Covid cases globally last week, compared to 6million in the first five months of the pandemic 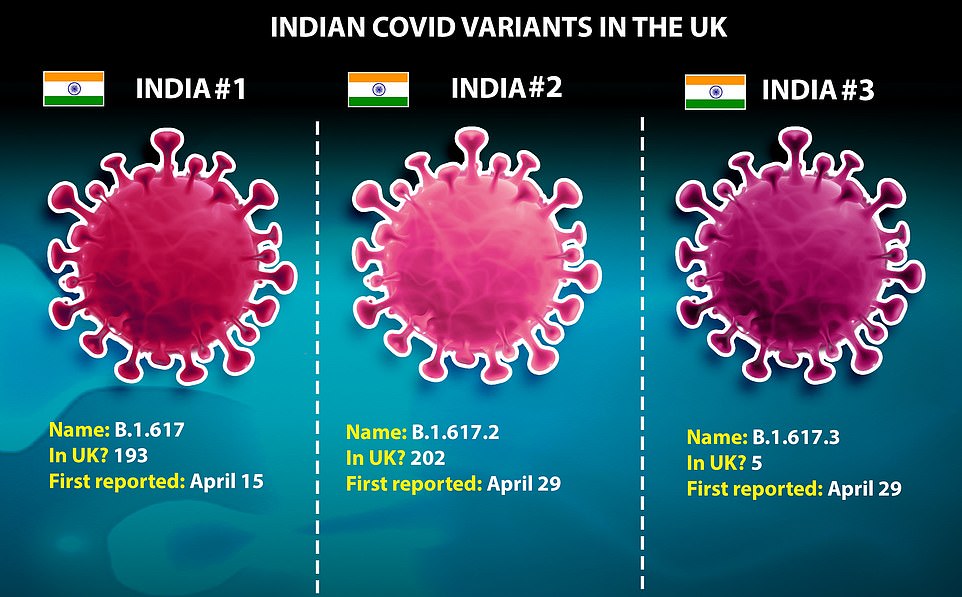 Public Health England has divided the Indian variant in three sub-types because they aren’t identical. Type 1 and Type 3 both have a mutation called E484Q but Type 2 is missing this, despite still clearly being a descendant of the original Indian strain. It is not yet clear what separates Type 1 and 3 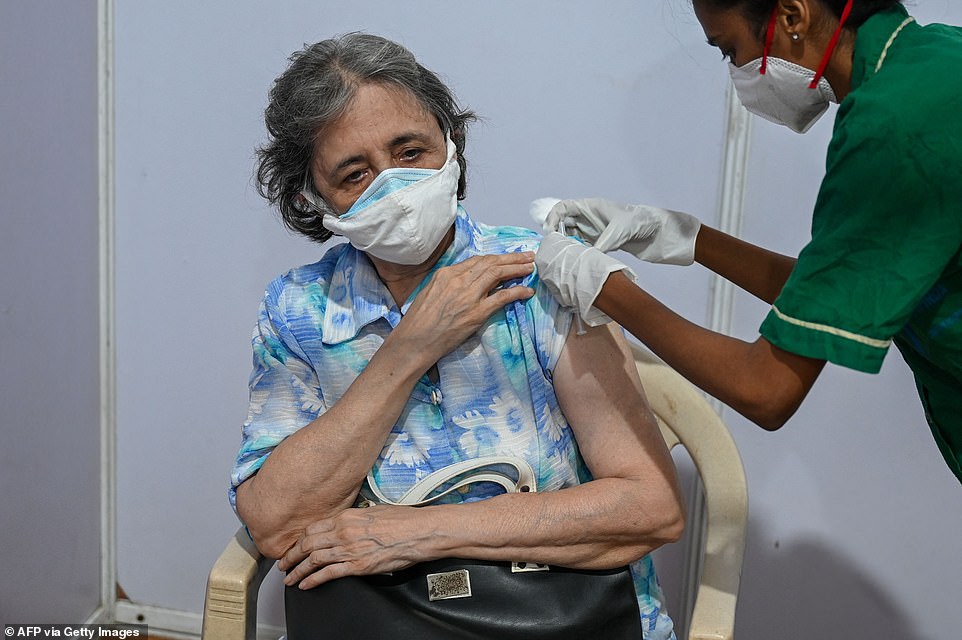 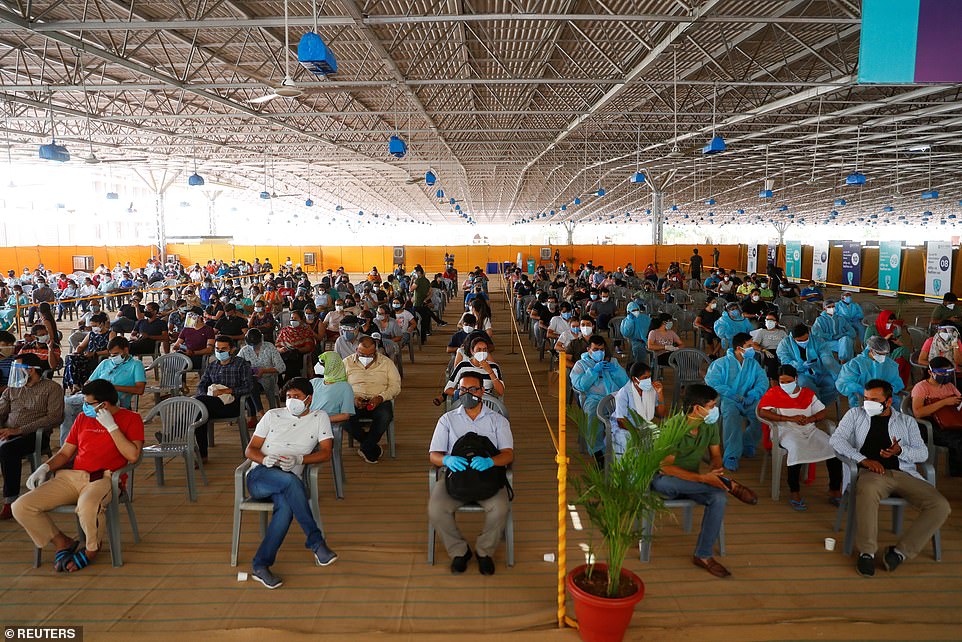 Mr Johnson said: ‘The UK and India share many fundamental values. The UK is one of the oldest democracies and India is the world’s largest. We are both committed members of the Commonwealth. And there is a living bridge uniting the people of our countries.’

A free trade agreement with New Delhi is seen as a huge prize for the UK Government following Britain’s withdrawal from the EU.

Ahead of the talks, Mr Johnson announced a £1billion trade deal with India which he said would create more than 6,000 jobs.

A strategic ‘tilt’ towards the Indo-Pacific region was one of the key objectives set out in the Government’s recent Integrated Review of foreign and defence policy.