A leading UK Intensive Care doctor says he’s having counselling to deal with the aftermath of a year spent working on the frontline during the Covid pandemic, and predicts the NHS now faces a PTSD crisis.

In a new book, Dr Jim Down, a consultant in critical care and anaesthesia at University College London Hospital, details how even experienced consultants were rendered ‘junior doctors’ by the unpredictable nature of the virus as cases soared in March 2020.

The 50-year-old consultant, who is married to former Holby City star Patricia Potter and has two children, was filmed telling BBC Medical Editor Fergus Walsh on April 6th last year in a harrowing broadcast from the frontline: ‘We can’t cope with a big spike, we just can’t.’

Dr Down, whose career has seen him work during the July 7th London bombings and dealing with poisoned Russian defector Alexander Litvinenko in 2006, wrote diaries documenting the trauma of the first wave, noting the despair he felt at the end of April 2020, when he said doctors working on Covid wards felt like ‘we just couldn’t get anyone better’. 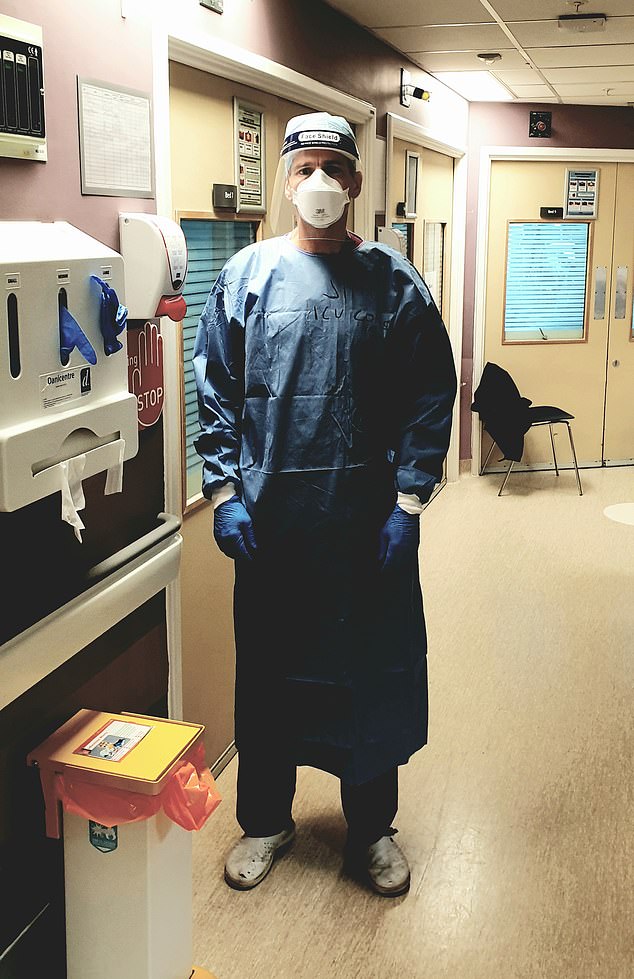 Dr Jim Down, a consultant in critical care at University College London Hospital, has documented the trauma experienced by frontline NHS workers in a new book, Life Support: The Diary of an ICU Doctor 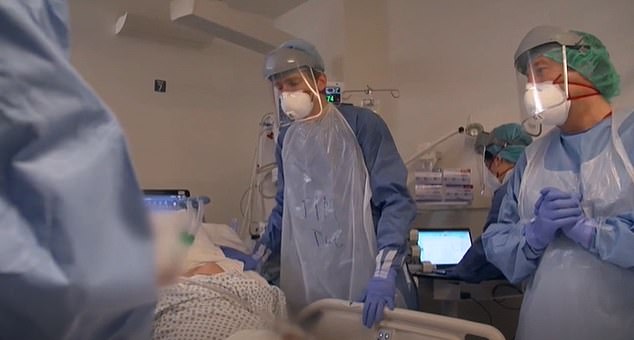 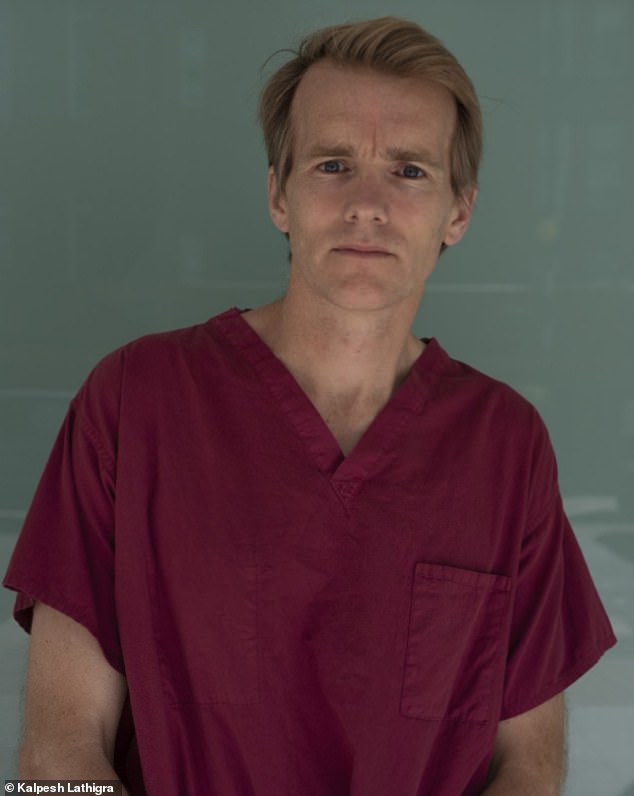 The 50-year-old consultant, who is married to former Holby City star Patricia Potter and has two children, told FEMAIL watching a 28-year-old patient die of Covid was one of the worst moments of his experiences over the last year

The book, Life Support: The Diary of an ICU Doctor on the Frontline of the Covid Crisis sees him share how hard it was to break the news of the death of the youngest Covid victim in the country at the time, a 28-year-old man named Adam, to his family, and the extraordinary contrast of having a foot in two worlds; the overburdened chaos of an ICU ward with 50 patients on it, and the silence, calm and sunshine of locked-down London.

He also details the early perils of ‘donning and doffing’ PPE, saying he would feel ‘covered in Covid’ by the end of a shift, and how staff were inundated with fast food and clothing donations sent in by well-wishers – including actors Damian Lewis and Helen McCrory – that kept them in takeaways for weeks.

Covid was meant to be a single-system disease but this man was shutting down and he wasn’t 70 with chronic health problems, he was 28 with none…

Speaking to FEMAIL, Dr Down says staff worked in fear that they wouldn’t have enough ventilators to care for patients and nervously watched oxygen levels in hospital wards.

‘Suddenly we were watching the oxygen levels on the walls and trying to work out if the fuses would go and if we had enough back-up.’ 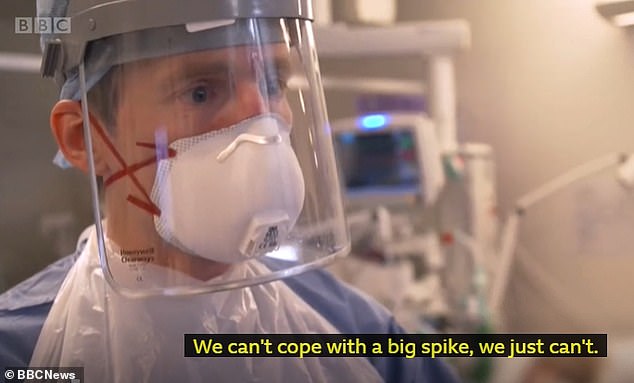 One of Dr Down’s darkest moments came at the end of March 2020, as he pursued every possible medical avenue to save Adam, a 28-year-old painter and decorator who’d deteriorated quickly after being admitted with fever, a cough and breathlessness that had endured for several weeks at home.

He describes how he and his colleagues made the decision to intubate Adam, attaching him to a ‘state-of-the-art ICU ventilator’, and were hopeful he would recover.

Days later, it became clear that inflammation had wreaked havoc on Adam’s body and he was desperately ill. 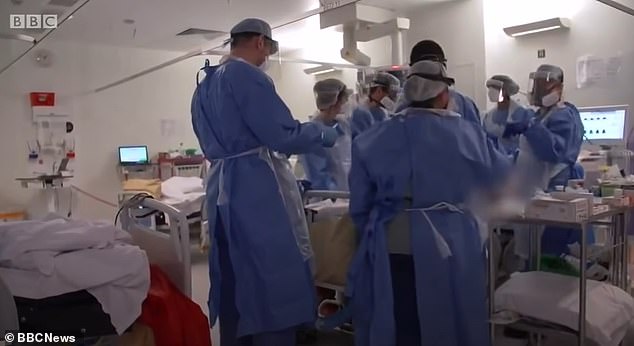 In the book, he describes the stark contrast between the hospital – and a ward with 50 Covid patients on it – and the stillness of the outside world in the midst of lockdown

Dr Jim writes in the book: ‘Covid was meant to be a single-system disease, an inflammation of the lungs but this man was shutting down, all of him, and he wasn’t 70 with lots of chronic health problems, he was 28, with none.’

He describes how the virus would frequently appear to outwit doctors’ decades of experience.

‘Often we were trying to work treatments out on the hop, and I found that very frightening. We were doing things with logic, thinking it may well work, but when it didn’t, we were left thinking “what next?'”

Proning, the practise of turning over a patient to improve blood flow into the lungs, became an ally – often a life-saving manoeuvre – but was physically difficult for staff.

Dr Down writes: ‘The regime is twice-daily turns, 16 hours on their front, eight on their back. In normal times, we might have one or two people being proned on our ICU. With Covid we had up to 25.’ 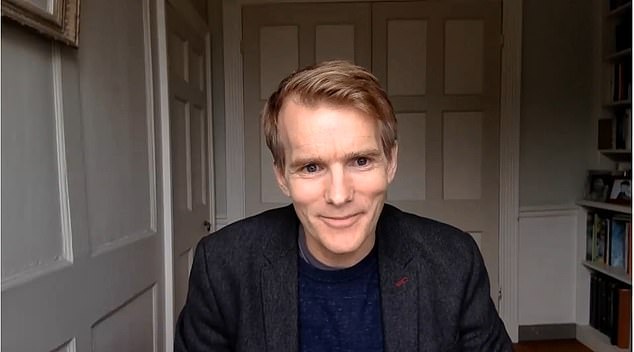 The ICU consultant says writing down what had happened during the first wave had proved therapeutic but that he was still having counselling to help process the events of the last year.

Dr Down tells Femail: ‘I have a tendency towards anxiety and and I think this has heightened that and I need to find my equilibrium again. I hadn’t really noticed this but my daughter, who’s eleven, said to me, you know you don’t seem to have joy at the moment.’

Strict restrictions on family and friends being allowed to visit patients meant that the emotional load was often carried by NHS staff, he says. 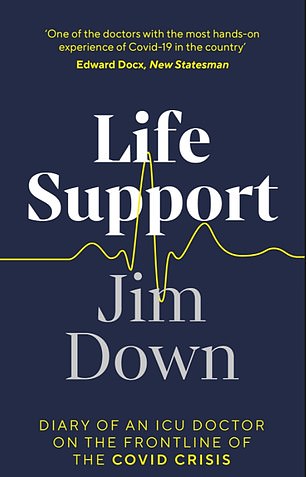 He talks about one patient in the book, Jonathan, who also tragically died of Covid and whose wife couldn’t be at his side because she was asthmatic.

‘If we felt someone was dying we did everything we could to get family in because it’s really important.

When Jonathan died, with staff at his bedside, it was very upsetting. That’s what we need to look out for [in terms of the impact on staff] because those moments were more exaggerated than normal.’

He also talks about how he’s kept in touch with some of the patients he treated during the first wave, saying that while there are some who are still suffering with the symptoms of Long Covid, many have gone on to make a complete recovery.

He praises too the general public, saying that that the lockdowns worked.

‘In the hospitals, we saw the impact of them in ICU, the flattening would come within two weeks.

‘I think that saved the hospitals from being overwhelmed, I’m grateful for the way the public responded, the sacrifices people made are amazing.’

Life Support: The Diary of an ICU Doctor on the Frontline of the Covid Crisis by Dr Jim Down, is out now