Tory MPs have blasted Nicola Sturgeon over her pre-election pledge to boost the pay of NHS staff by four per cent as they claimed she could never afford such a move if Scotland was independent.

The SNP leader trolled Boris Johnson by announcing the policy last night in what critics viewed as a blatant giveaway as the Scottish election campaign formally gets underway.

Ms Sturgeon’s pay hike contrasts sharply with the one per cent being mooted in England and it has prompted an immediate backlash over UK funding arrangements.

Tory MPs said the timing of the announcement was ‘egregious’ and amounts to a ‘pre-election inducement to vote for the SNP’ as the clock ticks down to the Holyrood poll in May.

They said the Scottish First Minister was only able to make the pledge thanks to the ‘unfair’ Barnett Formula which is used by the UK Government to figure out how much funding should be given to the other home nations when it decides to spend more or less on something in England.

Conservative figures said that while Ms Sturgeon ‘moans and groans’ about the UK as part of her independence drive ‘it is only because of the United Kingdom that she can give more money to nurses’.

More than 154,000 NHS Scotland staff are to be offered the hike of at least four per cent.

The move will benefit employees with contracts under the Agenda for Change system, meaning staff on the lowest pay point could get a 5.4 per cent increase.

Nicola Sturgeon, the SNP leader, last night pledged a pay rise of four per cent for NHS workers in Scotland 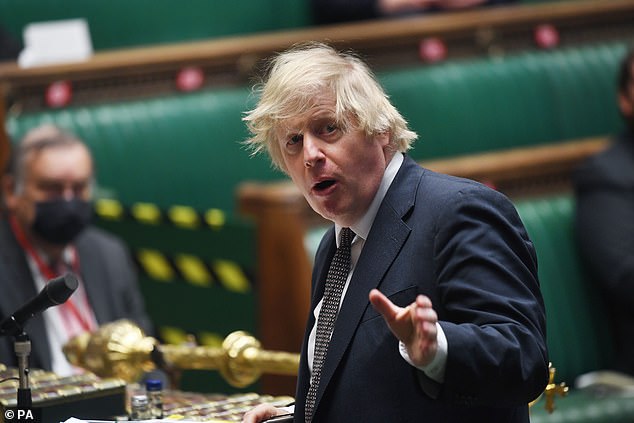 Numbers published in August last year showed that total public sector expenditure for the benefit of Scotland, including both UK and Scottish government spending, had increased by just over three per cent to £81billion.

That was equivalent to £14,829 being spent on public services per person in Scotland, some £1,633 per person greater than the UK average.

The spending gap has been largely blamed on the Barnett Formula, with the numbers contained in Holyrood’s annual Government Expenditure and Revenue Scotland report reigniting long-running calls for the formula to be overhauled.

He told MailOnline: ‘There is real concern in my constituency because in the East Midlands we get thousands of pounds less per head of population spent on us compared to Scotland and we pay the same taxes.

‘My constituents, not unreasonably, say why is it that Scotland gets all this extra money on public expenditure and we don’t?

‘This is a practical example of where the injustice comes. If we had an even spread of public expenditure, we could pay nurses more money across the whole of the United Kingdom.

‘But this unfair system where Scotland gets extra money gives them an advantage, my constituents just don’t see the basis for it.’

Another Tory MP said that ‘Scotland does extremely well out of the Barnett Formula’ and public spending levels would fall if the country was independent.

They said: ‘The timing is egregious. It has been done in the immediate run up to the Scottish elections and before purdah starts.

‘The optics of it are really very bad. I think it does look as if the Scottish government are putting the money in as a pre-election inducement to vote for the SNP.’

But they warned that changing the Barnett Formula and reducing funding in Scotland could hand Ms Sturgeon a major PR win in her bid to split from the UK.

They said: ‘The fact that the Scottish exchequer, if there ever were one, could never possibly afford to fund public services at the current rate if Scotland were to be independent, wouldn’t enter the equation. It would be used for short term political gain.’

At 10pm Ms Sturgeon tweeted: ‘Our NHS staff deserve more than applause and 1 per cent is not enough.

‘@scotgov is offering a 4 per cent pay rise, which would deliver guaranteed minimum increase of £1,000 for those earning less than £25,000 & 5.4 per cent increase for staff on lowest pay band… and all backdated to December 2020.’

Among those included in Agenda for Change are nurses, paramedics and allied health professionals, as well as domestic, healthcare support staff, porters and other frontline health workers.

The Scottish Government said the deal, if accepted, will be the ‘most generous National Health Service pay uplift anywhere in the UK’.

Health Secretary Jeane Freeman tweeted that the move was ‘making the applause real’.

In a statement, she said: ‘Following positive discussions with NHS unions and employees, the Scottish Government has put forward an offer of the biggest single pay uplift since devolution for NHS Agenda for Change staff.

‘Over 154,000 staff would benefit from this rise, which would see the average pay of a frontline NHS nurse rise by over £1,200 a year. 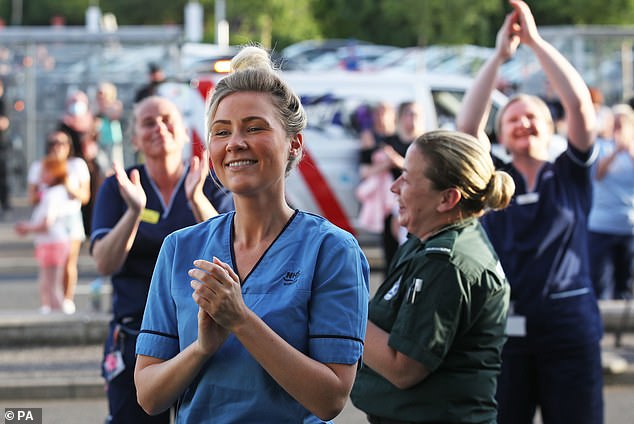 ‘This deal also includes support staff such as domestic staff, porters and healthcare support workers, the backbone of our services, who would see pay rises of over £1,000 – uplifts of between 4 per cent -5.4 per cent.

‘The uplift will be backdated from December 1 2020, rather than the usual April 1 2021, meaning all those covered by the deal will receive an extra benefit.

‘This has been an exceptionally challenging year for our health service and I am pleased that the Scottish Government is able to recognise the service and dedication of our healthcare staff.’

It comes after NHS workers in Scotland also received a one-off £500 payment from the Scottish Government as a thank you for their work during the coronavirus pandemic.

Colin Poolman, Scottish Terms and Conditions Committee (STAC) chairman and Royal College of Nursing (RCN) Scotland senior officer, described the timescale for negotiations as ‘tight as a result of the forthcoming election but we have now received an offer for a one-year pay deal’.

Willie Duffy, STAC staffside secretary and Unison regional organiser, added: ‘Each of the individual trade unions will now enter into discussions with their members on the offer.’